PhD student, 31, becomes an overnight millionaire as his biotech firm that could help diabetes sufferers worldwide sells for £623 MILLION

A university PhD graduate is set to become a millionaire after his biotech company was sold for more than £620million to a global healthcare giant.

Ziylo – a firm created by Professor Anthony Davis, his PhD student Harry Destecroix and businessman Tom Smart – has been bought by Novo Nordisk of Denmark.

The University of Bristol said the deal for its spin-out firm could transform diabetes treatment by leading to the world’s first glucose-responsive insulin being developed. 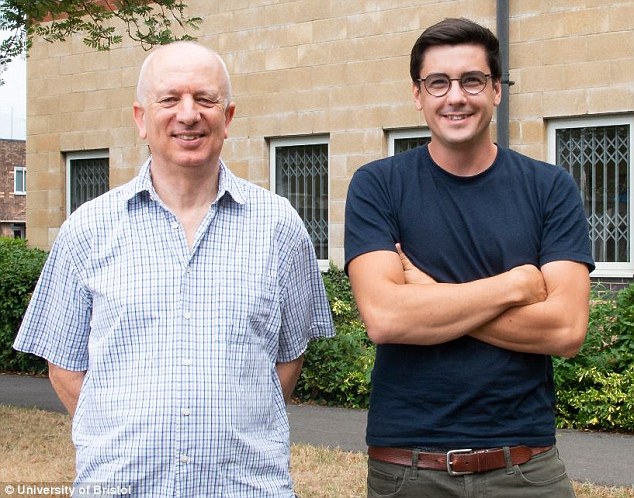 Professor Anthony Davis (left) and his PhD student Harry Destecroix have worked together on Ziylo at the University of Bristol, and it has now been sold for £623million 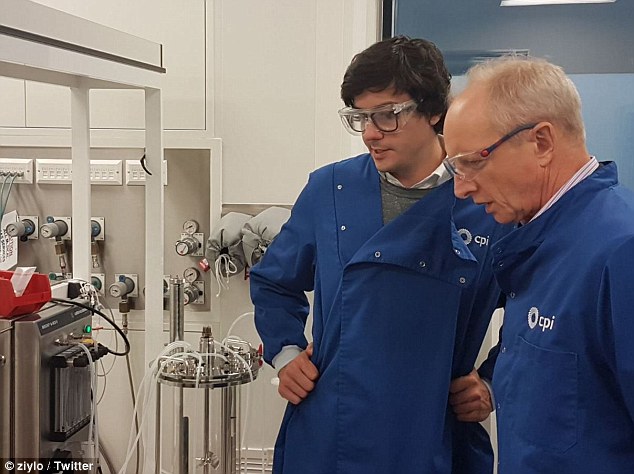 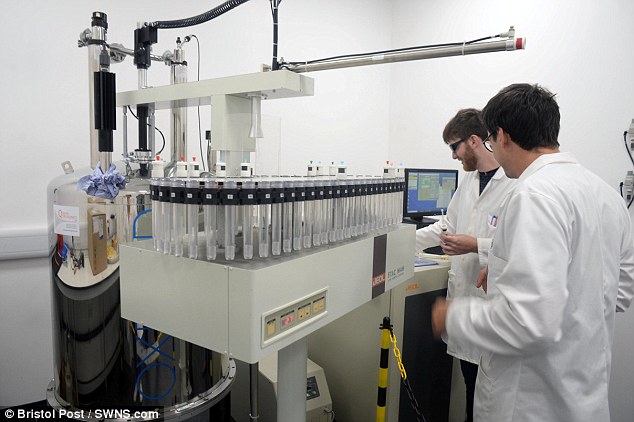 Dr Destecroix (far right), whose company’s work could lead to the development of the world’s first glucose-responsive insulin, is pictured working in the lab

Dr Destecroix, 31, who lives in a detached house worth £285,000 in Bristol’s affluent suburb of Redland, admitted on Twitter that he was ‘really excited’ by the deal.

The company is owned by its investors and directors, including Dr Destecroix – and £623million is the total potential deal value over ten years.

This is said to be dependent on clinical and regulatory milestones being met during the next decade, which would be distributed to all the shareholders.

Companies House records dating back to May show that Mr Destecroix owned 23 per cent of the firm’s shares, which would be worth £143million at the sale price.

Other major shareholders include Mr Davis, who owned roughly the same – and Mr Smart and the university, who each owned about 7 per cent or £45million worth.

More than 382million people worldwide, including four million in Britain, are said to have diabetes, which is a metabolic disorder affecting blood sugar levels. 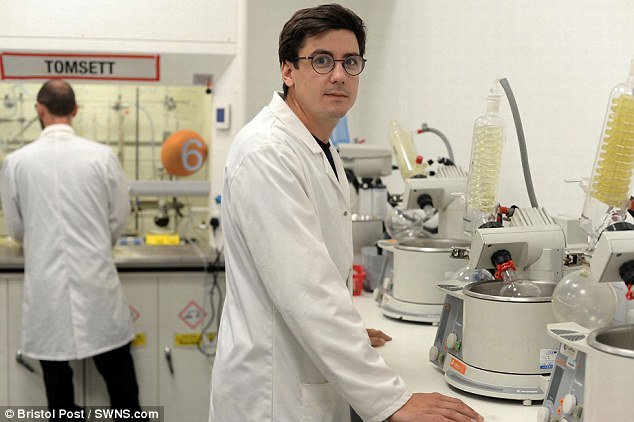 The company is owned by its investors and directors, including Dr Destecroix (pictured) – and £623million is the total potential deal value over ten years 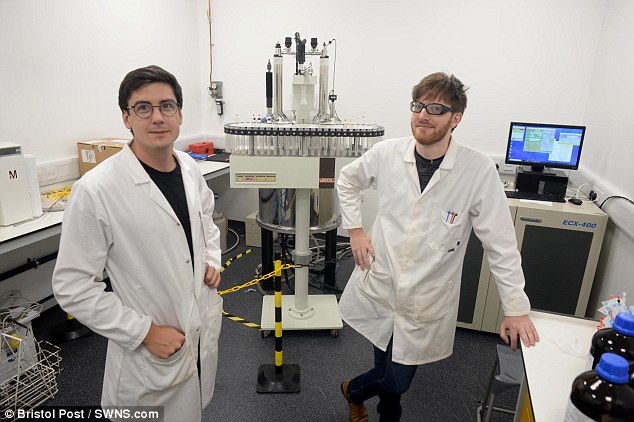 Dr Destecroix (left, seen with colleague Michael Tomsett) has had great success with his firm

Everyone with Type 1 diabetes and some people with Type 2 diabetes needs to take insulin, either by injection or a pump, to control their blood glucose levels.

What is glucose responsive insulin?

According to the company, they can be thought of as nano-sized sugar switches, which only ‘turn on’ if glucose levels rise in the bloodstream.

When glucose levels return to normal, the molecule’s insulin becomes inactive, which reduces a diabetic’s risk of hypoglycaemia. This is known as glucose responsive insulin.

Hypoglycemia occurs when blood sugar levels fall below normal levels, leading to clumsiness and difficulty talking, as well seizures and even death.

Ziylo has developed technology which could help enable the next generation of insulin which would be able to react and adapt to glucose levels in the blood.

This would eliminate the risk of dangerously low blood sugar levels, known as hypoglycaemia, and give people with the condition better metabolic control.

Davis Research Group scientists in the university’s school of chemistry had been working on the problem for years before Ziylo was established as a start-up in 2014.

Ziylo’s glucose binding molecules are synthetic molecules that were designed by Mr Davis, who has been researching synthetic sugar receptors for 20 years.

Dr Destecroix, Ziylo’s chief executive, said: ‘Novo Nordisk, as the leader in the diabetes field, is the ideal company to maximise the potential of the Ziylo’s glucose binding molecules in glucose responsive insulins and diabetes applications, and it brings hope of a truly ground-breaking treatment to diabetes patients.’ 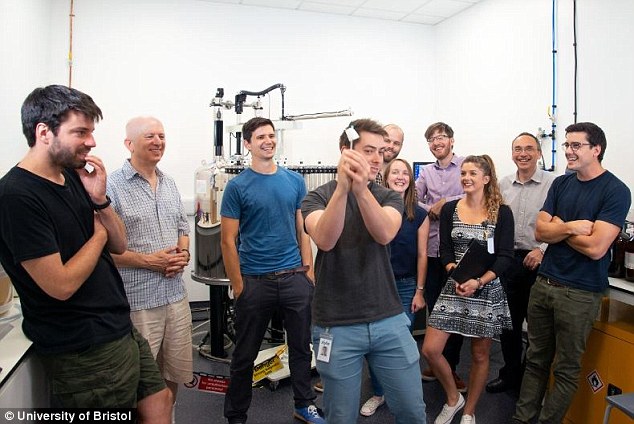 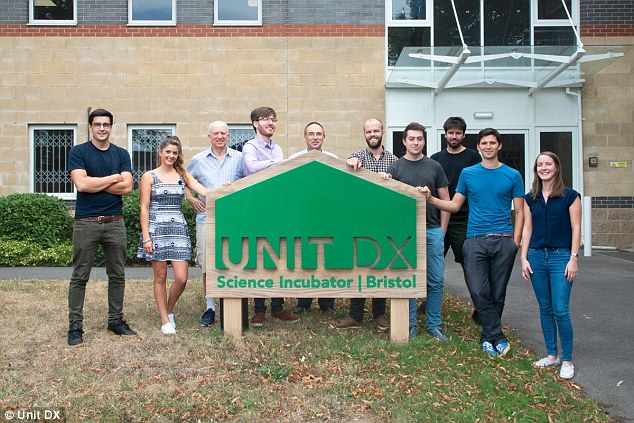 Who are the new Ziylo owners Novo Nordisk?

Novo Nordisk is a global healthcare company set up nearly a century ago with the aim of developing products to help those to diabetes.

It was formed out of two companies called Nordisk Insulinlaboratorium and Novo Terapeutisk Laboratorium, which were founded in the mid-1920s.

They were producing the revolutionary new drug insulin which had just been discovered by two Canadian scientists.

The firms spent decades competing with each other before merging in 1989 to create Novo Nordisk.

The company is based in Bagsværd, eight miles north of Copenhagen.It employs 43,100 people across 79 countries, but markets its products in more than twice that number.

The development of glucose responsive insulins is a key area for Novo Nordisk in its effort to develop a next generation of insulin which would lead to a safer and more effective insulin therapy.

‘This combination of natural and unnatural could be a new approach to biodesign. These unique molecules were inspired by nature and work in much the same way as natural glucose receptors.

‘A group of chemists, called supramolecular chemists, have been working on this problem for many years.

‘Often, they make molecules which behave quite like natural molecules, but usually they don’t work quite well enough for real-world applications.

‘The success of the Ziylo molecules shows that, with persistence, the problems can be solved and that biological molecules can be matched as well as mimicked.’

Professor Nishan Canagarajah, pro vice-chancellor for research at the university, said: ‘The university is proud of its cutting-edge research which has potential to generate major societal impact. 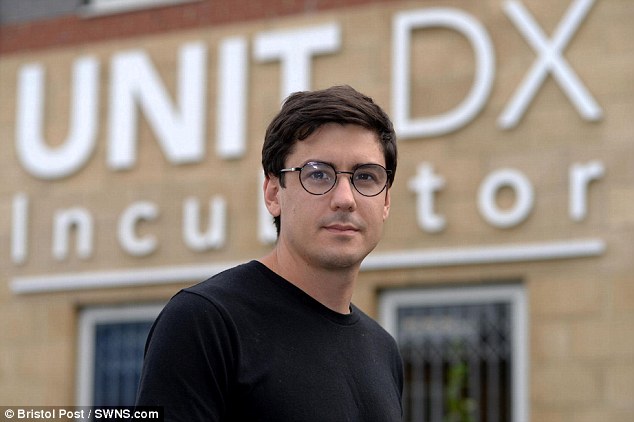 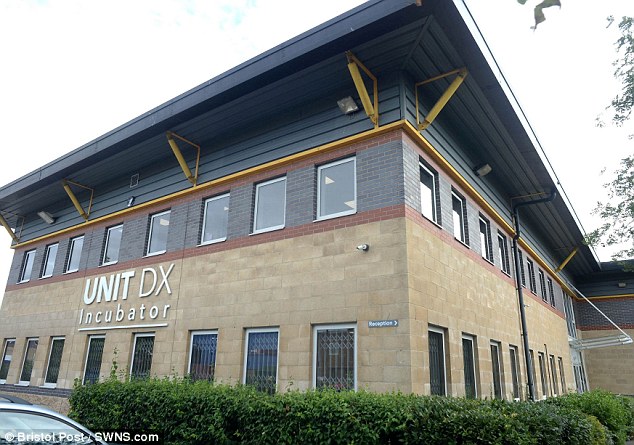 Unit DX, a science incubator in Bristol which was set up by the founders of Ziylo last year

The spin-out firm has developed synthetic molecules which bind to glucose in the bloodstream to help diabetics control their condition.

It eliminates the risk of low blood sugar which can lead to death in the severest cases. The glucose-binding molecules were designed by Mr Davis.

Ziylo has received £2million in funding since its formation from angel investors and government grants.

‘It is gratifying to see our research being developed to the point where it has the potential to make a real difference to people’s lives.

‘The acquisition of Ziylo by Novo Nordisk will allow this technology to take the next leap forward.

‘Well done to the team at Ziylo and to Professor Davis and his team at the university for getting to this exciting point.’

Dr Destecroix was born in Winchester in 1987 and used to live in the quaint Hampshire village of Liss. He earned his doctorate in chemistry four years ago.

He was responsible for setting up Unit DX last year, a science incubator in Bristol where up to 100 experts work in 16 laboratories across a 15,000 sq ft facility.

Writing last November, he said: ‘At home, when my parents told me I couldn’t do something, I asked them why. It was the same at school, and it’s been the same in my professional life.’

Lily Allen Celebrates 18 Months of Being 'Clean and Sober': I 'Would Recommend'

Lily Allen Celebrates 18 Months of Being 'Clean and Sober': I 'Would Recommend'