Unvaccinated Russians could be banned from buying ALCOHOL: Proof of jab will be required to make a purchase under proposals

The ability to buy a drink is on the line for unvaccinated Russians who may soon need to prove they’ve had a jab to buy booze.

A taskforce set up to stop the spread of coronavirus in the Sverdlovsk region is considering barring the sale of alcohol to people who don’t have a QR code showing they’ve been vaccinated.

In a new move from local authorities, drinkers from the nation typically known to enjoy a tipple may have to prove they’ve had a shot of the vaccine before getting a shot of vodka. 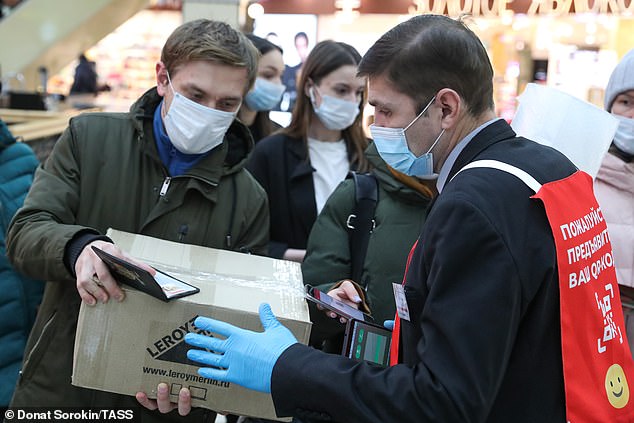 Artyom Bakhterev, the regional minister of the agro-industrial complex, announced the update through its Telegram channels.

He said: ‘We know about the initiative of market participants to enter QR codes for buying alcohol.

‘We are ready to discuss this measure with colleagues and experts at the next meeting of the operational headquarters.’

It was originally proposed by restaurateur Yevgeny Uryupin from Yekaterinburg, a city in the oblast, on his Instagram, Vesti.ru reported.

He said that the initiative could encourage people to get vaccinated and motivate them to consume less alcohol.

Since October 18 many areas in the country imposed restrictions to deal with a growing coronavirus crisis through a QR code system. A QR code requirement notice at the entrance to a shop at the Madagascar shopping mall, in Russia’s Republic of Chuvashia

In many places public venues are now only open to those who are vaccinated, have a negative coronavirus test or have recently recovered from Covid.

Only those who show a QR code proving they meet the criteria are allowed to enter.

Some regions have also announced mandatory vaccinations for those over 60.

According to Reuters only around 48 million out of 144 million Russians were fully vaccinated as of mid-October, with 51 million having received one shot.

The country is currently the highest in the world for daily average number of new deaths reported.