Home » World News » Up to half a million Brits suffering effects of 'long Covid', MPs told

Up to 500,000 Britons are suffering the effects of ‘long Covid’ — but GPs dismiss their fatigue and psychosis as being ‘all in their heads’, campaigners claim

Up to 500,000 Brits are suffering from psychosis, fatigue and loss of eyesight after recovering from coronavirus, MPs have been told.

Campaigners have even warned some doctors are dismissing many of the symptoms of ‘long Covid’ as being ‘all in their heads’.

The founder of the Long Covid Support Group, Claire Hastie, said the lasting effects of the illness had left her wheelchair-bound.

Another member of the 15,000-strong group, a doctor, revealed that he was unable to walk up one flight of stairs without getting out of breath.

Ms Hastie, who was diagnosed with Covid-19 in March, claimed data from the King’s College London symptom tracking app shows that up to 500,000 people in the UK are currently suffering from the long-term effects of Covid-19.

Most coronavirus patients will recover within a fortnight, suffering a fever, cough and losing their sense of smell or taste for several days.

However, evidence is beginning to show that the tell-tale symptoms of the virus can persist for weeks on end in ‘long haulers’ — the term for patients plagued by lasting complications. 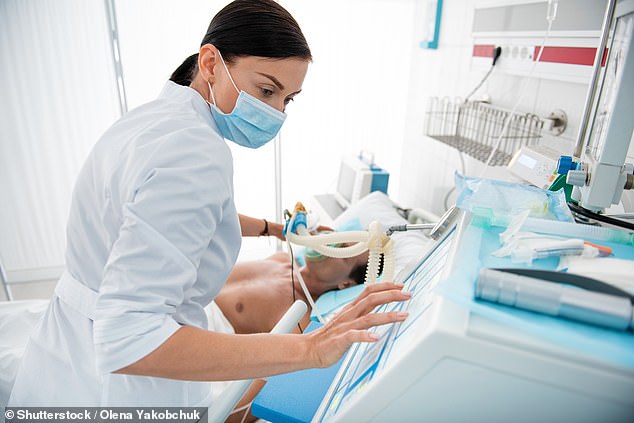 Up to half a million Brits are suffering from psychosis, fatigue and loss of eyesight after recovering from coronavirus, MPs have been told

A new study has found that the 90 per cent of coronavirus patients treated in intensive care in Wuhan – the place in China where the virus broke out – are still experiencing lung damage.

Research (seen by The Times) by the intensive care director at Zhongnan Hospital of Wuhan University, Peng Zhiyong, found that patients had a lack of energy and couldn’t walk far.

And almost half of the patients have developed depression because they can’t return to normal life.

Dr Peng is doing a year-long study following 107 patients who suffered pneumonia and were intubated during the crisis.

After three months he found 90 per cent still had lung damage.

He also found that about 10 per cent of people had lost the antibody that could fight off the virus.

And less than half of the people had managed to return to their jobs. Up to 50 per cent were depressed.

Survivors have described feeling like there is a ‘slab of concrete’ on their chest, and have struggled to complete everyday tasks, such as emptying the dishwasher, without feeling extremely tired.

Previously fit people told the All-Party Parliamentary Group (APPG) on coronavirus how their lives had been turned upside down by a horde of lasting symptoms.

Ms Hastie described how she used to cycle 13 miles to work but can no longer walk 13 metres and is now largely confined to a wheelchair with her children providing much of her care.

She said: ‘Many people in our group to this day are being told by their GPs that it’s caused by anxiety and it’s all in their heads.

‘It can cause anxiety but it is not caused by anxiety. The science needs to catch up with us.’

Another member of the Facebook support group, an anaesthetist and intensive care doctor, said he was now unable to walk up just one flight of stairs without feeling chest pain and shortness of breath.

Dr Jake Suett said: ‘I was doing 12-hour shifts in ICU. It’s a high-pressure situation, you have to be able to be active. I was going to the gym three times a week regularly.

‘And now a flight of stairs or the food shop is about what I can manage before I have to stop… if I’m on my feet then shortness of breath comes back, chest pain comes back.’

The APPG were also told that an online survey of 1,800 people found that many employees felt pressured to go back to work even though they didn’t feel they could while suffering from long-term symptoms.

Ms Hastie said that people in her Facebook group, which now has 15,327 members, have been told they’ll never work again.

She gave an example of a Pilates teacher who doesn’t know if and when she’ll ever be able to work again, adding: ‘People are being pressured back by employers who, understandably, don’t understand this.’ 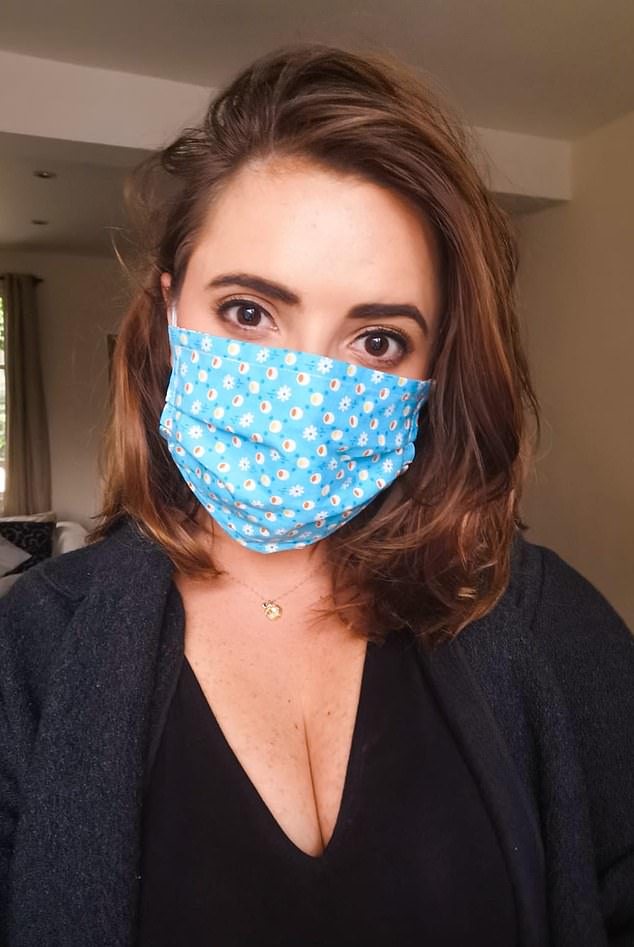 Talya Varga, 27, said the shortness of breath she has experienced since having Covid-19 in April feels like a ‘concrete slab on her chest’

Patients recovering from coronavirus will be treated online from their own homes because there is no funding for new rehab clinics, according to health officials.

NHS England said rehabilitation will ‘largely be provided in existing physical facilities’ and in some cases patients will be treated virtually in their own homes.

But the Health Service Journal (HSJ) said no capital funding was made available for more facilities – and spaces are currently limited.

Instead, a virtual ward – the yourcovidrecovery.nhs.uk website – will be used to treat the majority of people recovering from severe coronavirus symptoms.

The Government confirmed a further £500 million in revenue funding over the rest of this year for Covid rehab services – meaning health workers’ salaries and the costs of existing buildings will be met.

But no more buildings can be built, or renovated for the purpose, because capital funding – which is for long term projects – has not been made available.

Ruth Ten Hove, director at the Chartered Society of Physiotherapy, told the HSJ: ‘The message we have been given is that people can now do their rehab online (through a new NHS website).

‘We were involved in the website and it can get good outcomes. But it’s not for everyone and using that alone will widen health inequalities and digital exclusion.’

An NHS spokesman said the decision not to allocate capital funding was made because patients can access treatment online.

One Long Covid activist, Robin Gorna, revealed that her three children aged between 11 and 16 had suffered from long-term symptoms and one took four months to recover.

And one member of the APPG, Labour MP Andrew Gwynne, said that he was still suffering from coronavirus symptoms after 18 weeks.

He said that he struggles to ask just one Parliamentary question on Zoom and then is forced to spend the rest of the day in bed.

British scientists have already launched an investigation into the long-term impacts of Covid-19 in search of answers to thousands of people’s problems, which has been referred to as ‘this generation’s polio’.

The Department of Health has announced that up to 10,000 people will be involved in a study to look at how people who catch the coronavirus fare long-term.

Growing evidence suggests that even people who only get mildly sick may suffer long-lasting health effects including lung damage.

The UK’s Scientific Advisory Group for Emergencies (SAGE) has warned that Covid-19 patients could be left with ‘extreme tiredness and shortness of breath for several months’.

The study, led by researchers and doctors in Leicester, will look at how people’s mental health is affected by illness and whether factors like sex or ethnicity affect how well someone recovers from Covid-19.

Patients in the study, which will receive £8.4million in funding, will have medical scans, blood tests and lung samples so experts can look at how they are affected.

It comes as the NHS has announced it’s launched a long-term recovery service called ‘Your Covid Recovery’, which will offer online advice to the public and more specialised physio and mental health support to some patients from this summer.

Chief Medical Officer, Professor Chris Whitty, said: ‘As well as the immediate health impacts of the virus it is also important to look at the longer-term impacts on health, which may be significant.

‘We have rightly focused on mortality, and what the UK can do straight away to protect lives, but we should also look at how Covid-19 impacts on the health of people after they have recovered from the immediate disease.’

Researchers from Italy have reportedly found that almost 90 per cent of patients discharged from a Rome hospital after recovering from coronavirus were still experiencing at least one symptom two months after coming down with the illness.

The APPG also heard from a group of grieving relatives who have lost family members to coronavirus.

Jo Goodman, who represents a group of 1,450 bereaved family members, is urging the Government to consider a Hillsborough disaster-style inquiry into the handling of the coronavirus response.

ARE THERE LONG-TERM SYMPTOMS OF COVID-19?

Most coronavirus patients will recover within a fortnight, suffering a fever, cough and losing their sense of smell or taste for several days.

However, evidence is beginning to show that the tell-tale symptoms of the virus can persist for weeks on end in ‘long haulers’ — the term for patients plagued by lasting complications.

Data from the COVID Symptom Study app, by King’s College London and health company Zoe, suggests one in ten people may still have symptoms after three weeks, and some may suffer for months.

For those with more severe disease, Italian researchers who tracked 143 people who had been hospitalised with the disease found almost 90 per cent still had symptoms including fatigue two months after first falling unwell.

The most common complaints were fatigue, a shortness of breath and joint pain – all of which were reported during their battle with the illness.

Another study in Italy showed one in ten people who lose their sense of taste and smell with the coronavirus – now recognised as a key sign of the infection – may not get it back within a month.

The study, published in the journal JAMA Otolaryngology – Head and Neck Surgery, involved 187 Italians who had the virus but who were not ill enough to be admitted to hospital.

The UK’s Chief Medical Officer Professor Chris Whitty has said the longer term impacts of Covid-19 on health ‘may be significant’.

Support groups such as Long Covid have popped up online for those who ‘have suspected Covid-19 and your experience doesn’t follow the textbook symptoms or recovery time’.