‘I didn’t know I had the ‘rona when we went out’: US military employee who faces ten years in German jail for bar crawl with COVID-19 apologizes – as it emerges she served top brass at conference on how to stop disease spreading

The female employee at a U.S. military vacation lodge in Germany facing ten years in jail for going on a bar crawl when she had coronavirus has been revealed as 26-year-old Yasmin Adli from Florida.

Adli was awaiting her test results after a recent vacation to Greece when she partied for several nights in Garmisch-Partenkirchen, despite already having a sore throat.

In a screenshot of a text message allegedly sent by Adli to other co-workers who partied with her on several nights in the lead-up to her positive test, she thanked them all for coming to her ‘rona party’ and claimed ‘I didn’t know I had the rona when we went out’.

A former employee claimed Adli also remained working at the Edelweiss Lodge and Resort before she tested positive, setting up a conference for US military top brass about preventing the spread of coronavirus.

The former employee claimed, however, that the blame was not entirely on the resort worker but on the hotel which encouraged a ‘culture of concealment’ that overlooked flaunting of the quarantining rules. 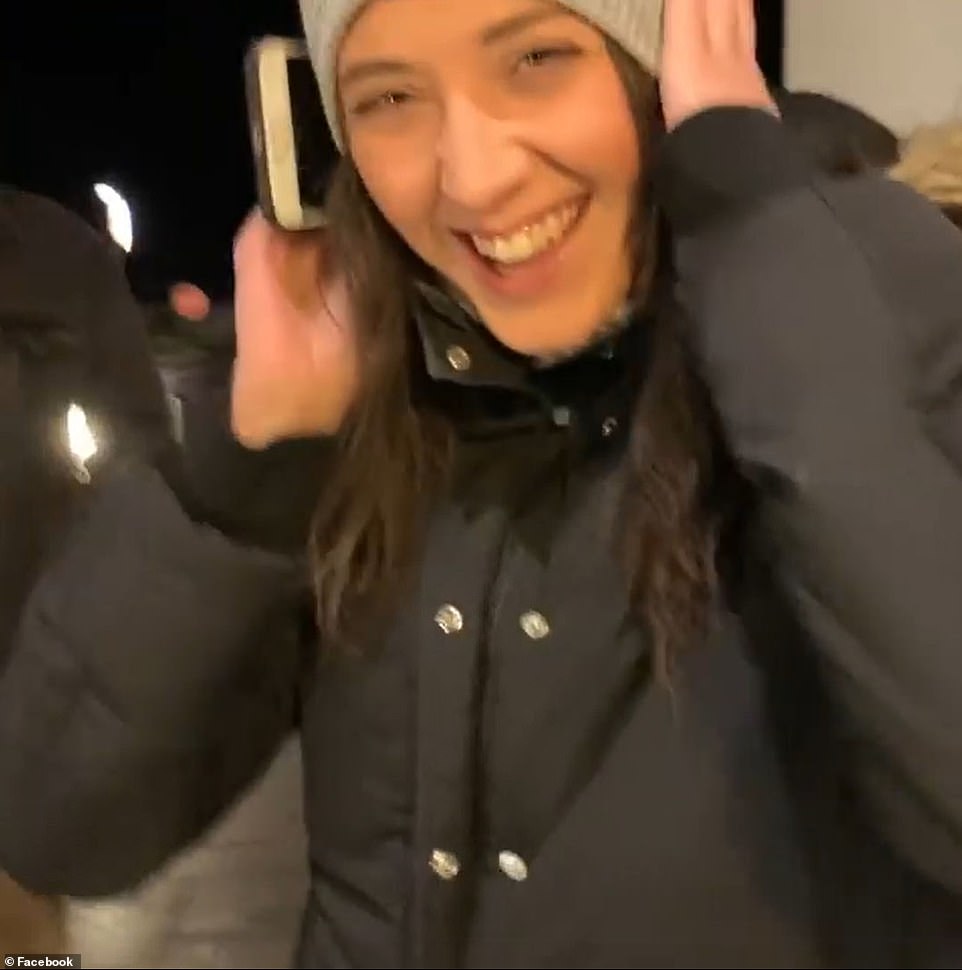 The Munich public prosecutor has opened an investigation after the woman, named as 26-year-old Yasmin Adli, went out partying in Garmisch-Partenkirchen while awaiting test results after returning from a vacation in Greece in early September 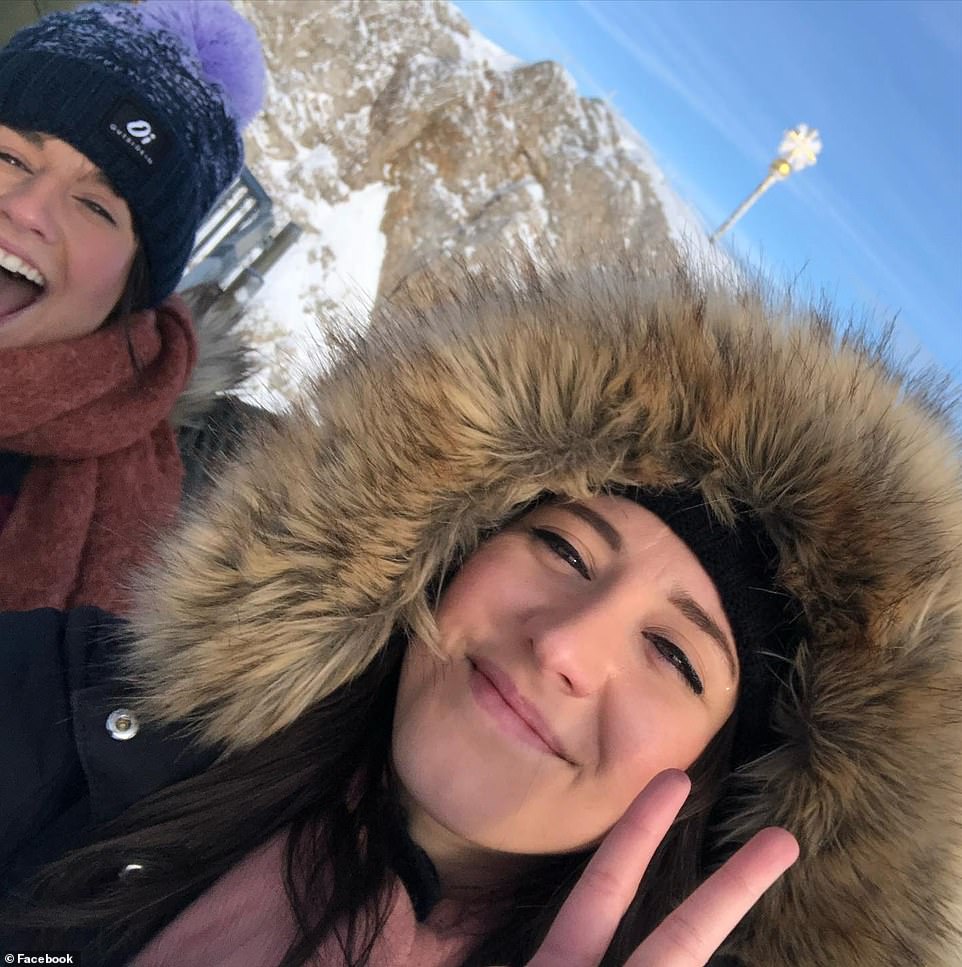 Adli pictured right with a friend. A former employee claimed she remained working at the Edelweiss Lodge and Resort, setting up a conference for US military top brass about preventing the spread of coronavirus before she tested positive 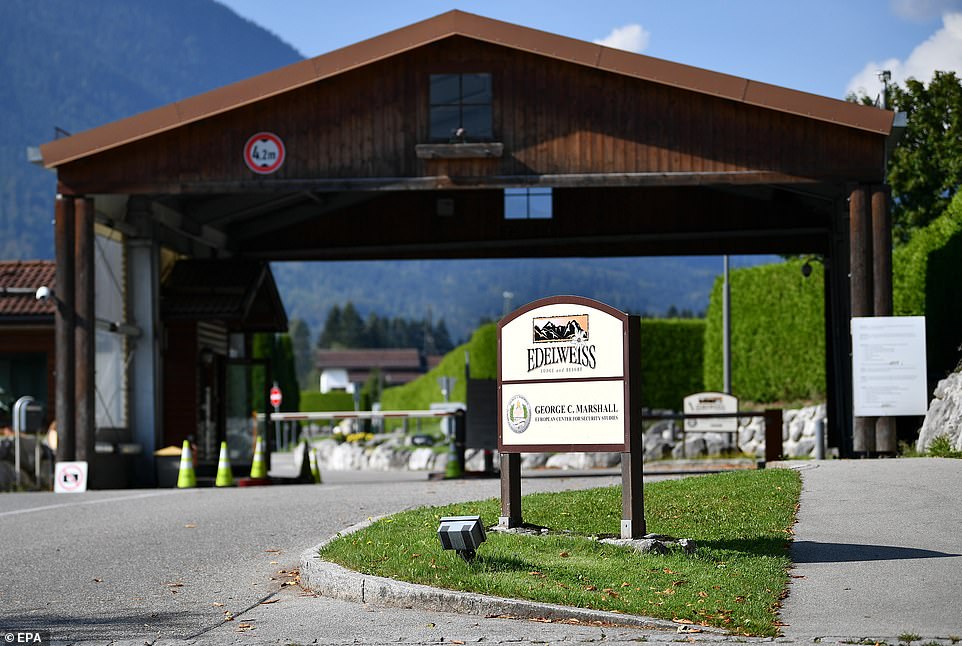 Edelweiss Lodge and Resort serves members of the U.S. Armed Forces and their families

An alleged message thread with employees including Yasmin Adli in which she states: ‘I didn’t know I had the rona when we went out’ and thanks them for going to her ‘rona party’ after discovering she was infected

Adli faces jail time after infecting at least 23 others and exposing more than 710 people to the virus through her partying after the Greece trip in early September.

On Tuesday it was reported authorities had recorded three more COVID-19 infections in people who frequented bars visited by the 26-year-old, who works at the Defense department owned Edelweiss Lodge and Resort.

The location is an Armed Forces Recreation Centers (AFRC) Resorts that serve members of the U.S. Armed Forces, their families and other authorized users.

A source told DailyMail.com that a strong drinking culture is fostered at the resort with employees having one last blow-out with friends once their contracts come to an end.

On the night Adli visited Peaches, they claimed that a large group of staff were leaving and she kissed several other employees. At this time, she was said to be feeling too sick to return to work.

She had also worked in the hotel upon her return, serving guests and staff in the hotel’s Cafe and setting up conference rooms until the day she went for a coronavirus test.

Among them was a conference with the United States European Command about preventing the spread of Covid in the US Army.

The resort has now shut down for two weeks but a former employee places some of the blame on the current outbreak with them for ‘fostering the culture’ of breaking the rules.

They said that even when the resort posted a statement on Facebook on Friday to announce the staff infections, guests were still allowed to check into the hotel and not told about the outbreak. 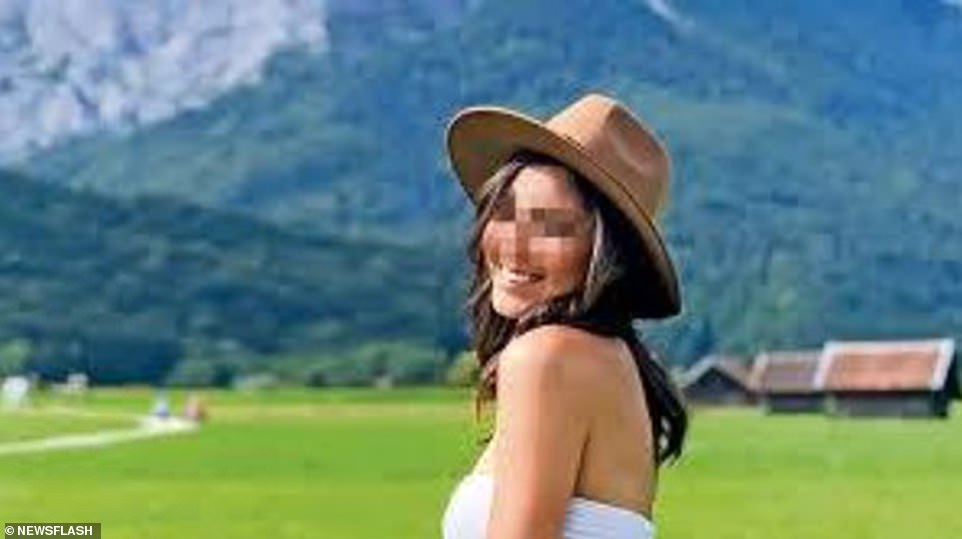 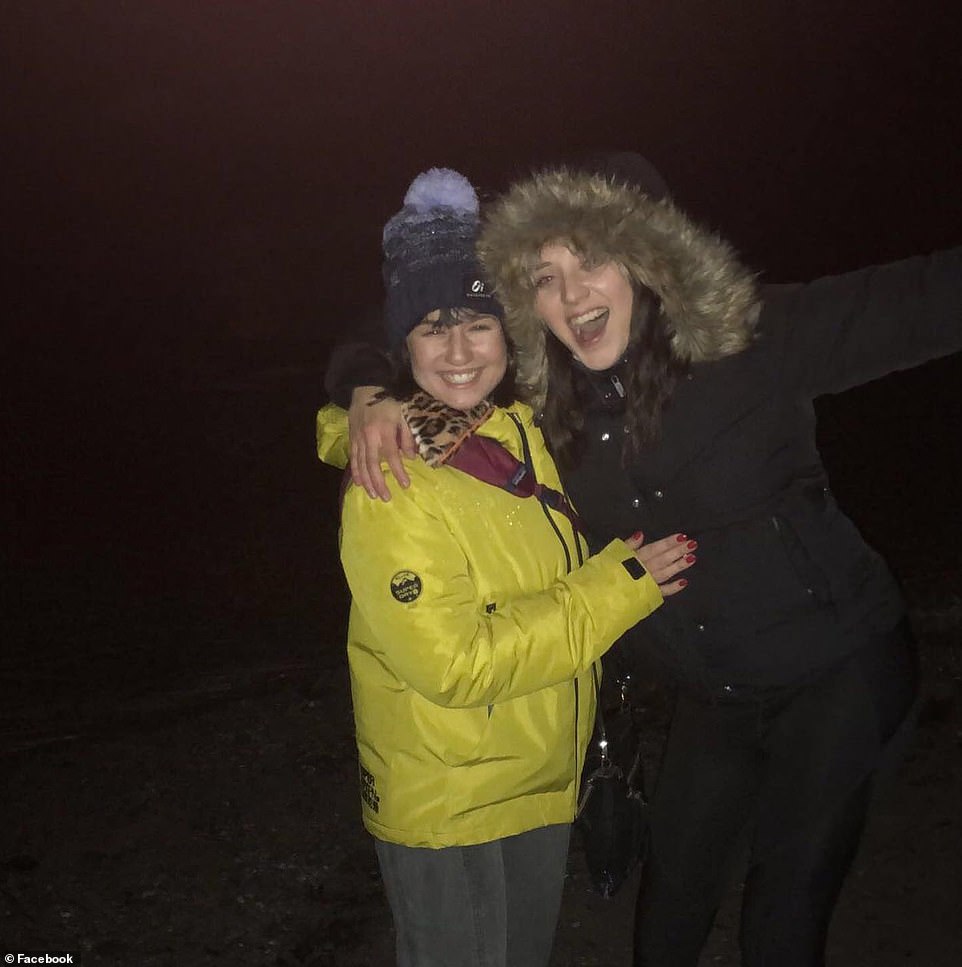 Pictured right, Adli with a friend. She is said to have kissed several other employees on one of the nights out in the German town before she tested positive for coronavirus. It is not known if those people were infected with coronavirus 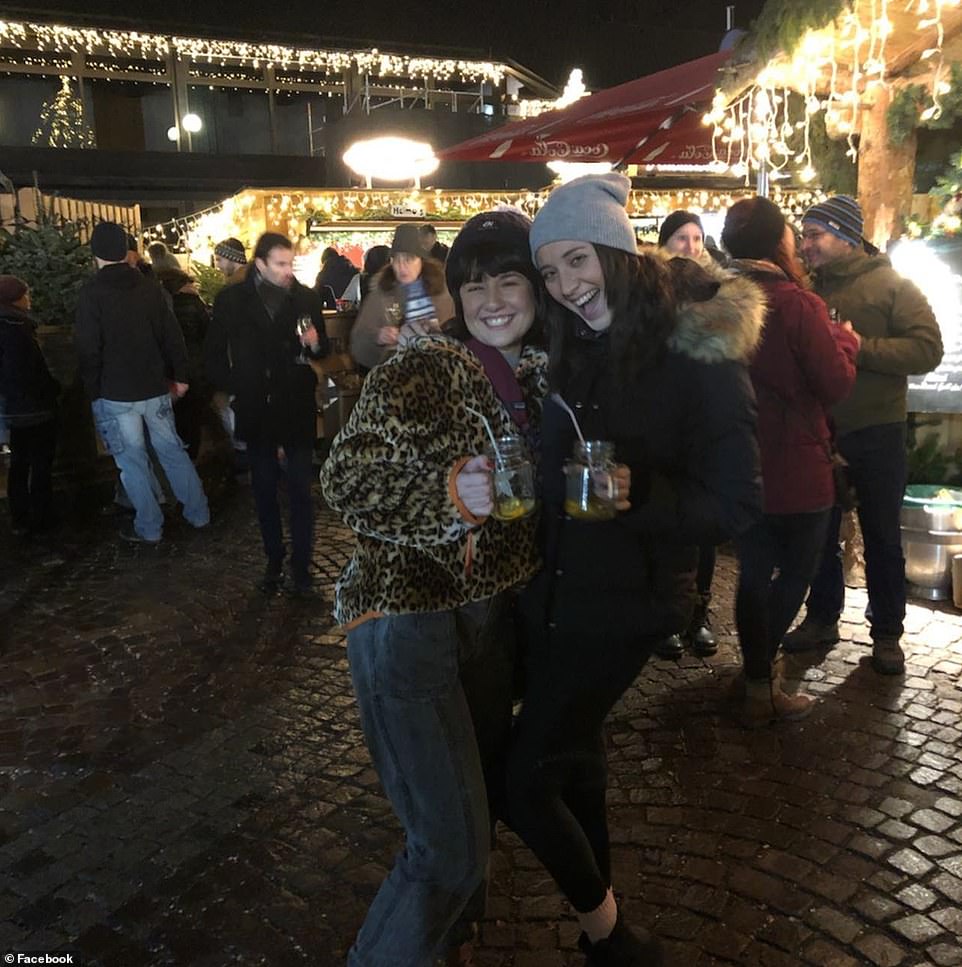 Pictured right, Yasmin Adli with a friend. She could face ten years in jail in Germany for spreading the virus

They claim these guests were simply told they would need to check out again on Sunday.

‘I self-evacuated earlier this year when the Covid crisis inside the hotel became untenable, because there is not a strategy in place to protect the employees; but instead give the appearance that all is well and the hotel is operating normally,’ they said.

‘This culture of concealment is how this super-spreader event was allowed to occur, and why many so employees who live and work inside the hotel are now Covid positive.’

They also claimed that the hotel knew staff were traveling to restricted countries such as Greece and that others had taken the trip before Adli.

‘Management at the hotel have been criminally negligent throughout the pandemic and have fostered the dangerous culture which enables their employees to remain unconcerned about the ramifications of this virus,’ the former employee added.

‘When the current situation came to light, ELR management quickly scrambled to begin covering themselves and protect the image of the hotel,’ they explained.

‘They quickly pulled about 80% of the staff from working stations – where many were actively serving employees – and forced them back to their rooms while local testing officials were brought on base to begin a sweep of the quarantined individuals.’ 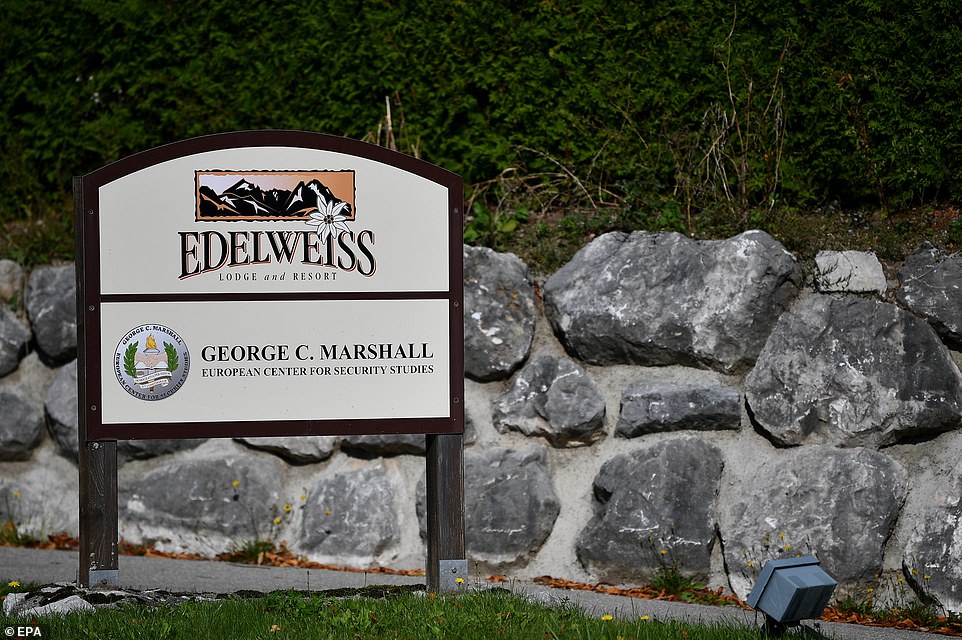 The Edelweiss Lodge and Resort, which is reserved for members of the American military, their families and veterans, has also shut down completely for two weeks following the number of coronavirus cases found among staff

They claim that even as test results came in, only those who tested positive were told with others being left in their rooms for hours, some in a room with a person who would then test positive.

The hotel then issued a message to staff in which some were accused of ‘reckless behavior’.

‘Their silence in the matter is forcing all the German press to look at this – admittedly dangerously negligent – woman,’ the staff member said.

Attempts made to contact Adli for comment were unsuccessful. She has since deleted her social media profiles, a source confirmed.

The latest cases recorded Tuesday take the total number of recent infections in the town to 59, including 25 staff at the Edelweiss Lodge and Resort, which is reserved for members of the American military, their families and veterans.

Lawyer Arndt Kempgens said: ‘From the point of view of conditional intent, this can even lead to criminal liability for wilful and dangerous bodily harm according to Section 224 of the Criminal Code. The sentence ranges from 6 months to 10 years in prison.’

District Office spokesman Wolfgang Rotzsche added: ‘If the woman has actually consciously accepted this risk, then she should also be legally prosecuted.’ 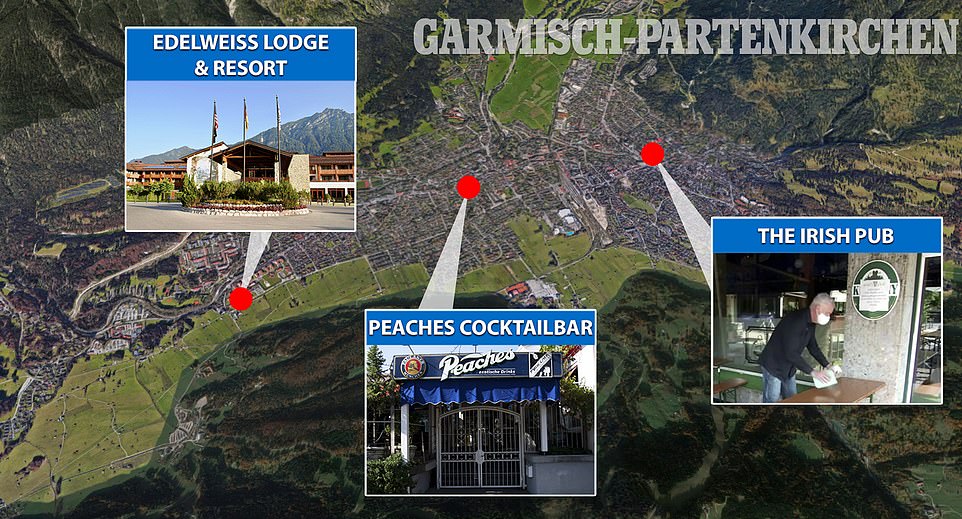 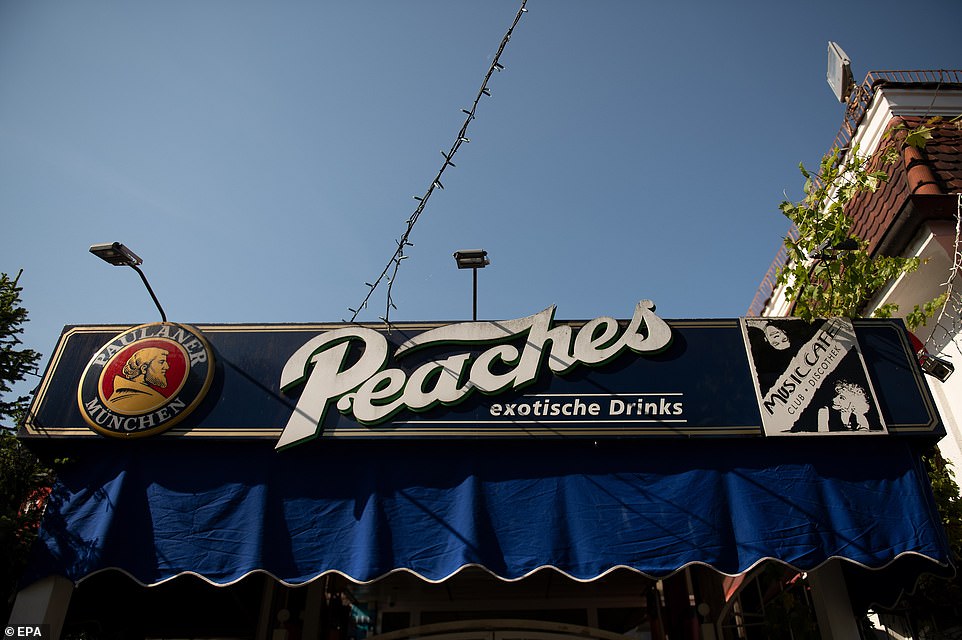 The woman is said to have visited the Peaches bar, pictured, and the Irish Pub in Garmisch

US Army spokesman Donald Wrenn told Bild: ‘For US civilian employees, the Bavarian regulations for the prevention of infectious diseases apply, just like for every German citizen.

‘The US Army in Bavaria keeps its soldiers and civilians as well as the Bavarian ordinances with regard to limiting the spread of the virus to a high standard. Any violation of these regulations would be inconsistent with our behavior and our efforts to keep our communities safe.

‘Our main focus is currently on the thorough and precise identification of contact persons as well as additional tests to limit the possible spread of COVID-19.’

Anton Speer, who heads the county administration, told reporters Tuesday that authorities are still waiting for the results of about 300 tests conducted Monday and it was too soon to give the ‘all-clear.’

Three new infections emerged from 740 tests conducted over the weekend.

On Tuesday it was reported authorities had recorded three more COVID-19 infections in people who frequented bars visited by the 26-year-old, pictured

Bavaria’s governor, Markus Soeder, called the outbreak in Garmisch-Partenkirchen ‘a model case of stupidity’ because the American had gone partying despite having COVID-19 symptoms and awaiting a test result.

Soeder had said ‘such recklessness must have consequences’ and suggested the woman could receive a stiff fine.

Breaching quarantine rules can result in fines of up to 2,000 euros ($2,375), but further penalties and liability for damages are possible if others become infected or businesses suffer economic harm as a result.

Andrea Mayer, a spokeswoman for prosecutors in Munich, confirmed Tuesday that her office had opened a preliminary investigation into the woman on suspicion of causing bodily harm. ‘The investigation is ongoing,’ she told The Associated Press. 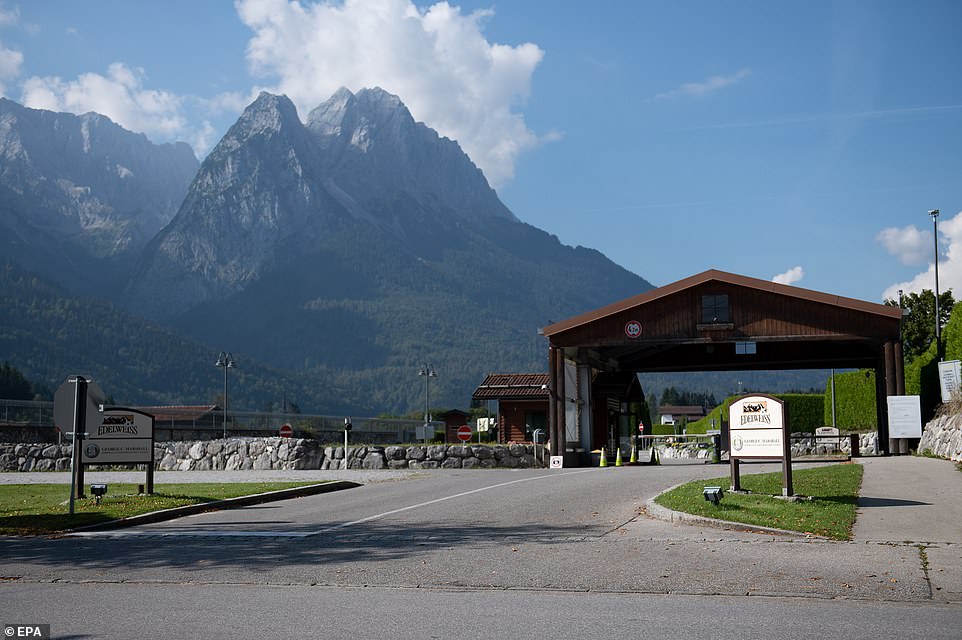 The Edelweiss resort has vacation cabins and 258 rooms and suites

The outbreak has lead to a 10pm curfew on bars and restaurants and a rule that no more than five people can gather in public.

John Tomassi, spokesman for the U.S. Army Europe, said the military is conducting its own investigation into the incident and is recommending any service members or others who had contact with the Edelweiss employee be tested for coronavirus.

The Edelweiss resort has vacation cabins and 258 rooms and suites, but Tomassi said he did not have details on how many people had been staying there over the past two weeks. He said contact tracing was part of the investigation.

Germany’s disease control center on Tuesday reported 1,407 new cases across the country in the past day.

The country has been widely praised for its handling of the pandemic. It has recorded over 9,360 virus-related deaths, a toll one-fourth of Britain’s.