Putting the fizz back into the bubble car! Iconic 60s vehicle was ridiculed but adored by its owners and is now making a comeback (but would you pay £10,000 for one?)

With fuel prices hitting their highest level in four years, you might be forgiven for wanting to live in a bubble.

Well soon, thanks to an enterprising pair of young brothers from Switzerland, you’ll be closer to doing just that. For if Oliver and Merlin Ouboter get their way, our streets will be humming with the electric purr of their extraordinary new motor — a bubble car called the Microlino.

Boasting a 20-horsepower motor copied from a small forklift, a total length just shy of 8 ft, a range of 75 miles and a top speed of 56 mph, the Microlino is motoring on a small — almost microscopic — scale. 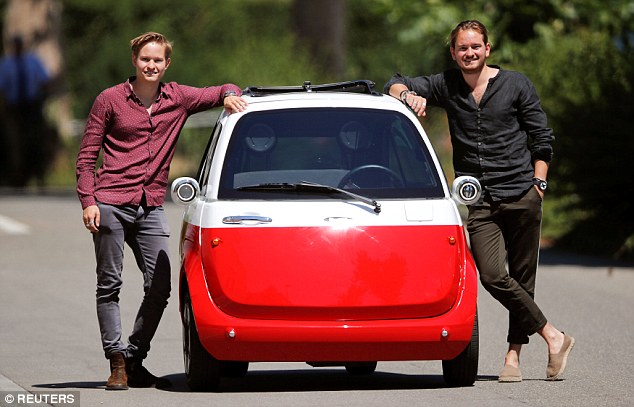 But while the size and performance may be positively bonsai, demand for this bubble car is booming. The brothers initially planned a reservation list of only 500 orders, but they have already received a whopping 7,200 and are hoping to hit an annual output of 10,000 cars.

At £10,770, the Microlino certainly doesn’t have a titchy price tag, costing about the same as a Vauxhall Corsa, which has three doors rather than just one. But while the Vauxhall will take just short of £60 to fill, the Microlino can be powered for a pittance — £1.35.

Of course, this number crunching rather misses the point of the Microlino. Its allure lies more in a nostalgia for the comic charm of the bubble car.

Those with long memories will recognise that the Microlino looks very similar to one of the first bubble cars — the iconic Isetta, which sold a staggering 162,000 worldwide.

Designed in 1953 by Italian Renzo Rivolta, whose company made fridges, the Isetta was a response to the public’s desire for an affordable vehicle, as well as one that could negotiate the narrow streets in Italian towns.

It was also a hit in West Germany, where an ailing BMW was looking for a car to turn its fortunes around. 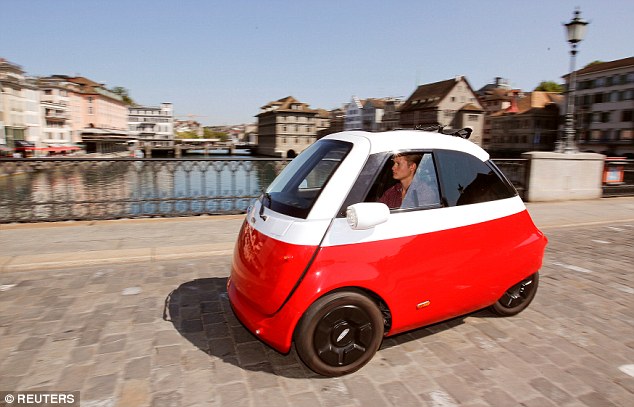 The car (pictured) boasts a 20-horsepower motor copied from a small forklift, and reaches a top speed of 56 mph

The Isetta did just that, and motorists marvelled at the fact that it could accommodate a family of three — just — and still park facing the pavement.

In Britain, the Isetta was manufactured by a former pilot called R. J. Ashley.

But there was a technical hitch with the British version. Because it needed to have right-hand drive, the driver sat on the same side as the engine, which meant all the weight was on one side of the car — risking it toppling over. The solution was simple: a chunky lead weight was embedded in the other side to balance it out.

The Isetta’s basic build meant it could be easily adapted. One of the most extraordinary examples was that driven by Horst Breistoffer, who gutted his 1964 model. But his modifications were for a serious purpose — to smuggle refugees through the Berlin Wall from East to West Berlin.

Breistoffer’s logic was an impeccable piece of bluff, as he guessed the guards would not bother searching such a small vehicle.

On nine occasions, he was proved right. But unfortunately, on the tenth escape attempt, a guard spotted some movement in the back of the car and he and the refugee were arrested.

The car is now on display at the Checkpoint Charlie museum in Berlin.

Also cramming people into his Isetta at the same time was the actor Ian Ogilvy, who bought a bright yellow version when he was a drama student in London. 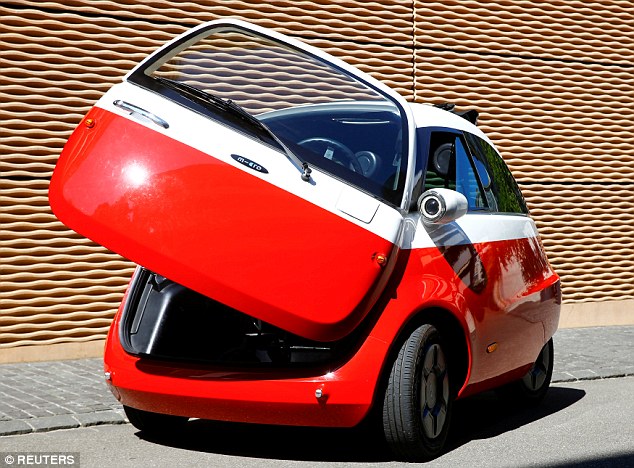 The brothers planned a reservation list of just 500 , but they have already received 7,200 orders and are hoping to hit an annual output of 10,000 cars

‘One day I happened to mention my holiday plan to drive all the way to Scotland and back in my tiny Isetta bubble car to visit a relative,’ the former star of The Saint recalled recently.

‘My friend Gemma Jones asked if she and her boyfriend could come too. I reminded her that with three of us somehow crammed on to the bench seat there would be room — as far as luggage was concerned — for only a toothbrush and a clean pair of knickers. Gemma insisted that it would still be fun.

‘So we went to Scotland and back, the three of us, squashed together inside a small yellow metal ball on three diminutive wheels. Top speed was reduced to 40 mph. We even slept in the thing one night. Gemma was right — it was fun.’

Germany’s relationship with the bubble car is enshrined in another iconic example of micro-motoring. While for most the name ‘Messerschmitt’ is associated with World War II fighter aircraft, the company also produced a bubble car in the Fifties and Sixties that went through various versions, until it was called the KR200.

It was the brainchild of German war veteran Fritz Fend who had lost both his legs and developed vehicles for the disabled.

Fend produced a design classic, even if the driving experience left a little to be desired. Not only was the car noisy, but the canopy made it extremely hot. 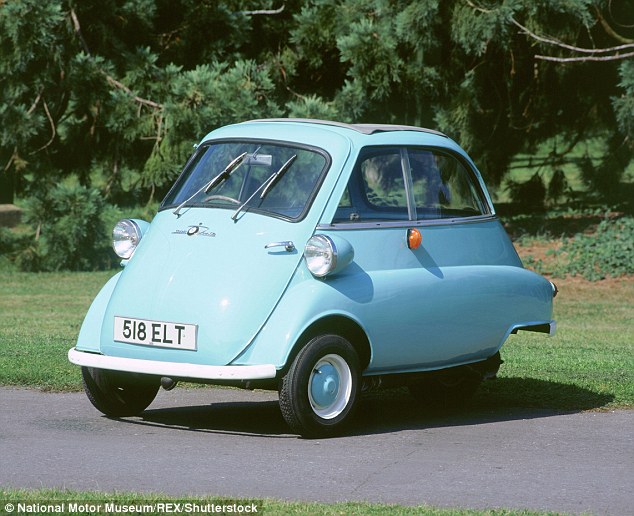 The new Microlino is very similar to one of the very first bubble cars – the iconic Isetta (pictured), which sold 162,000 units worldwide

However, it’s the British who can claim the record for creating, according to Guinness World Records, the smallest production car ever made — the Peel P50.

The Peel, which was made on the Isle of Man in the Sixties, really was absurdly small, measuring just 4 ft 5 in long and 3 ft 2 in wide. Naturally, as it was little bigger than the average armchair, there was room only for one person, and the whole vehicle weighed just 9 st 6 lb. It even had only one headlight.

The car may have had a three-speed gearbox, but what that gearbox lacked was a reverse.

To park it, the driver simply got out, lifted the back of the car with a handle and rolled it into position.

By the end of the Sixties, the fashion for bubble cars had burst. People wanted bigger, more practical vehicles. But they are still proving to be collectors’ items and can fetch high prices. 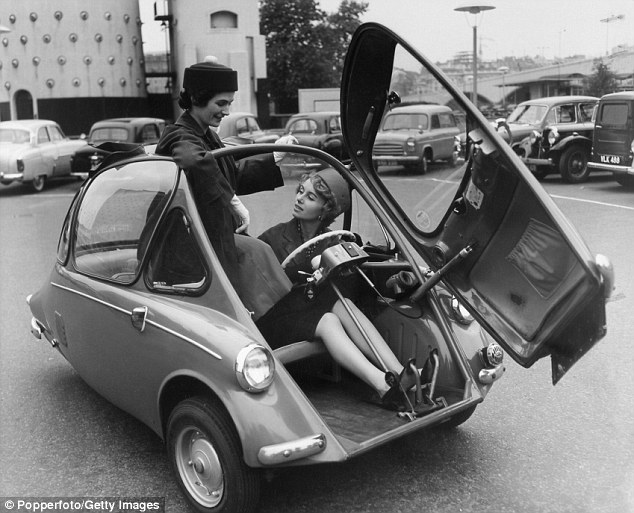 Surprisingly, not all bubble car enthusiasts are as diminutive as the vehicles. Take Jim Jamieson, the former owner of a 1960 Isetta, who measures 6 ft 8 in and weighs 25 st — around one third the weight of the car itself.

‘I bought the car out of bloody-mindedness and my stupid sense of humour,’ Mr Jamieson says.

‘But despite my size, it was absolutely fine. It was used as the Isetta owned by the landlord’s daughter in the TV series Heartbeat, and she would have to drive it in a very spirited way, sometimes just tipping on to two wheels.

‘However, the stunt men refused to touch it, saying that the car didn’t have enough wheels! So I had to drive it, all 25 st of me, and wearing a wig, and sitting as low as possible.’

Many bubble cars have ended up in garages, forlornly left to rust. But with those rising fuel prices, it is certainly likely they will become more common again.

The Microlino is not the only new bubble car on the roads. An electric Peel P50 closely modelled on the original can also be spotted. And look out for the Corbin Sparrow in the U.S., which costs around £23,500.

At prices like that, some bubble cars are still not a realistic option for most.

But if the Microlino catches on, and gets a little cheaper, there’s a good chance the bubble car industry will once more inflate.