Seven national guards have been injured in Venezuela after what is believed to have been an assassination attempt on socialist President Nicolas Maduro.

Information Minister Jorge Rodriguez said in a live broadcast that several drone-like devices with explosives detonated near the president.

He said Maduro is safe and unharmed but that seven people were injured.

‘At exactly 5.41pm in the afternoon several explosions were heard,’ Rodriguez said in a live address to the nation minutes after the incident.

‘The investigation clearly reveals they came from drone-like devices that carried explosives.’

Footage broadcast by state television has shown the Venezuelan leader abruptly cutting short a speech as hundreds of soldiers scatter.

Mr Maduro was speaking in the capital of Caracas during a celebration of the National Guard’s 81st anniversary.

He was standing next to his wife Cilia Flores and several high ranking military officials for the event broadcast on radio and television.

A video shows Ms Flores wince and look up after a sound. The soldiers lined up in ranks then begin running. The transmission was cut without explanation. 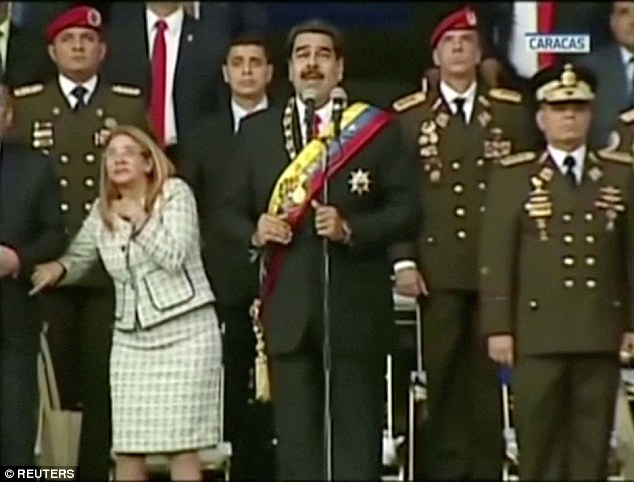 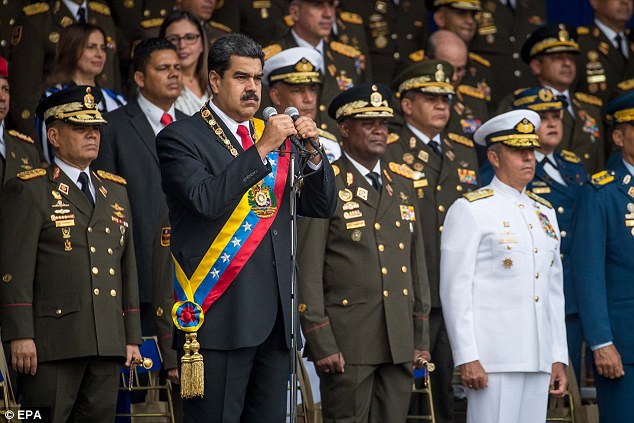 Maduro (pictured moments before the blast) is reportedly unharmed 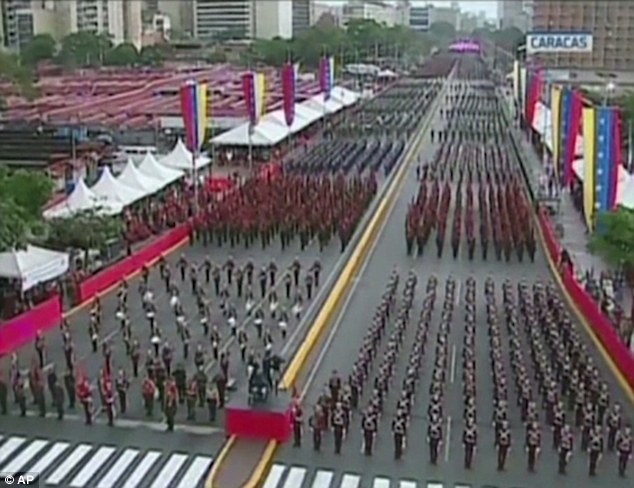 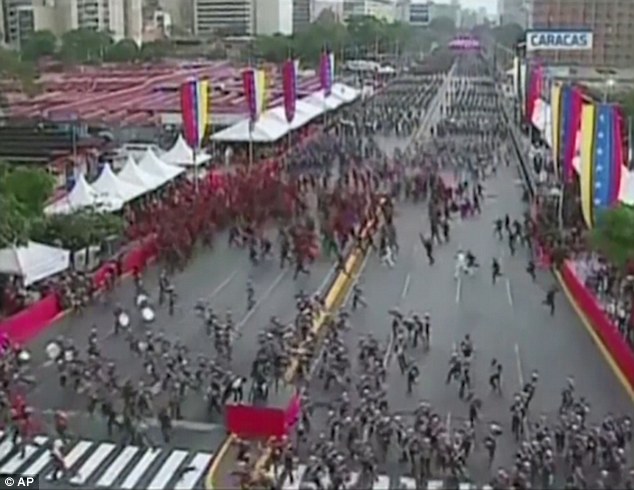 ‘To the conscious Venezuela, we are going to bet for the good of our country, the hour of the economic recovery has come and we need…’ Mr Maduro was saying before the cameras moved away from him.

However, firefighters near the scene are disputing the government’s version of events.

The attack comes as the nation struggles with an economic crisis.

Venezuela’s soaring inflation is predicted to top 1 million percent by the end of the year, economists at the International Monetary Fund recently predicted. 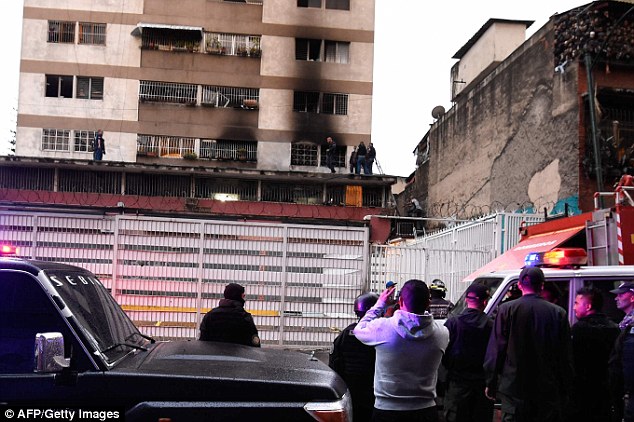 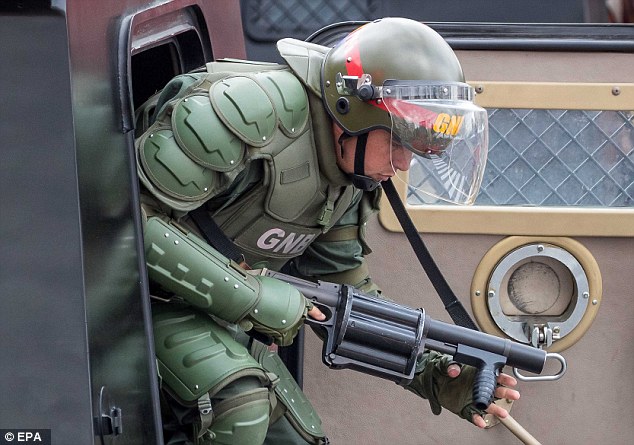 Venezuelan military arrive to participate in the televised event, which was the target of a drone attack 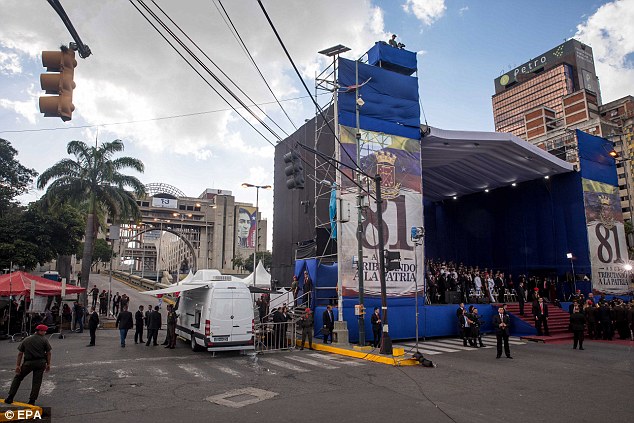 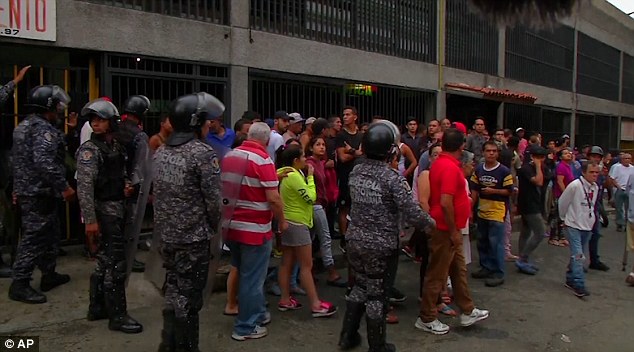 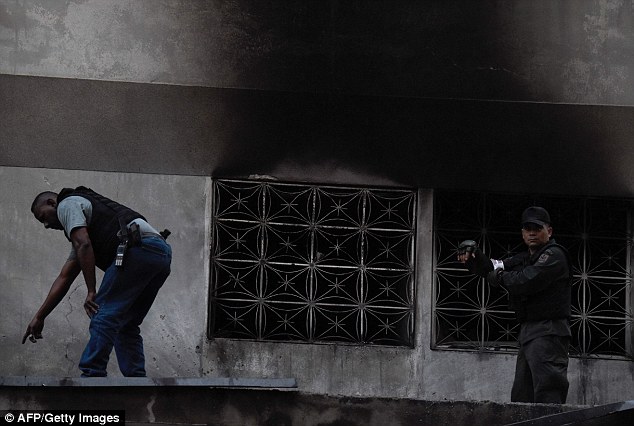 Security forces check a building after an explosion during a ceremony attended by President Nicolas Maduro. A large black blast mark was left on the side of a building

The country’s economic turmoil compares to Germany’s after World War I and Zimbabwe’s at the beginning of the last decade, IMF officials said, adding that Venezuela’s economic contraction ranks among the world’s deepest in six decades.

Maduro, the self-described ‘son’ of Chavez, says he is battling an ‘imperialist’ plot to crush socialism and take over Venezuela’s oil.

Opponents say he has destroyed a once-wealthy economy and ruthlessly crushed dissent.