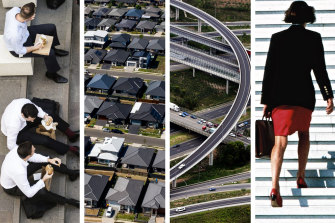 Some were winners, others did less well. Credit:The Age

Families in growth areas. Treasurer Tim Pallas has splashed $115 million for the Metropolitan Health Infrastructure Fund this year, and $66 million to acquire land in Cranbourne, Torquay, Pakenham, City of Whittlesea, Eltham, Point Cook and the inner south for community hospitals, as well as planning for three more.

Students. A huge infrastructure spend of $3 billion in school upgrades will renew campuses and create jobs. There is almost $250 million for retired teachers to return to schools as tutors and $16.6 million to keep four-year-old kinder free next year.

Rail commuters. A total of $2.2 billion on the Suburban Rail Loop, $2 billion on Geelong fast rail, and $660 million for the next stages of upgrades on the Shepparton and Warrnambool line. The government will also spend $276.5 million on the Dandenong corridor to allow for faster high-capacity metro trains to run and $5.5 million on track works around Caulfield station to enable the separation of the Frankston and Dandenong lines.

Tram users. A total of $1.48 billion will be spent on building 100 new modern accessible trams to retire the ageing A and Z-class trams. What will be the largest tram order in decades will include an order for new E-Class trams and possibly another variety, will also go towards a new maintenance facility in Melbourne’s north-west to support 1900 jobs.

Road users. A total of $1.6 billion in road network and infrastructure initiatives, including $2.5 million in the ‘Summer Streets’ program to provide traffic management during COVID safe outdoor events, $117 million package of road and intersection upgrades across Melbourne and $411 million to resurface, rebuild and maintain 1700 kilometres of roads.

Social housing residents. A total of 9300 new homes, including 2000 for those with a mental illness, have been announced. There will also be 2900 new affordable and low-cost homes for low-income earners so they can live closer to where they work. A quarter of this funding will go towards regional Victoria.

People at a high-risk of COVID-19. New funding to protect public housing residents from coronavirus, with the money to go towards testing, cleaning and security.

Job seekers. More than $620 million has been pledged towards a new program aimed at connecting people looking for work with a job that will suit them, including face-to-face support and mentors to help Victorians back into the work force.

Domestic tourists. Those wishing to visit regional Victoria will benefit from improved facilities at tourist hotspots like the Grampians, Wilsons Promontory and the state's ski fields. And the government will spend almost $30 million on vouchers to encourage intrastate holidaying.

Clean energy. In total $1.6 billion has been committed to clean energy, including $797 million last week for heating and cooling efficiency. New today is $540 million for six "renewable energy zones" in places such as sunny Mildura and the windy east coast.

Businesses. Businesses that hire new staff will be able to pay less in payroll taxes, and the threshold for paying payroll tax has increased.

New home buyers Up to 50 per cent of the stamp duty cost on homes valued up to $1 million will be waived.

Melton Hospital. The long-awaited $75 million Melton Hospital that the Andrews government announced with fanfare on the eve of budget day has turned out to be a bit of a fizzer. Treasurer Tim Pallas has only set aside $100,000 in this year's budget for the hospital. The largest chunk of the money won't flow until after the next election. There's $30 million budgeted for 2021/22 and $45 million for 2023/24.

Independent schools. Last year's budget included $400 million for independent schools over four years for new infrastructure. Perhaps unsurprisingly, that hasn't been built upon in today's budget, which includes no new funding for Victorian independent schools despite them usually receiving plenty of government money compared to other Australian states and territories.

Cyclists. Less than half of a target of 12 cycling upgrades were delivered last financial year, with just five projects completed. The government blamed delays associated with stakeholder engagement and problems finalising scope. But $63.4 million will be spent on pedestrian and cycling infrastructure around schools.

Bus users. Safety audits of bus operators fell well below a target of 560 audits, with only 368 completed last financial year. The government said this was due to the impact of the COVID-19 pandemic. But $20 million is being spent on a trial of zero-emission buses. Ongoing improvements to bus services at just $4.2 million over the forward estimates pales compared with tram and train boosts – $1.5 billion for 100 new trams and $500 million for commuter car parks and Dandenong corridor works.

Public housing. A total of 1100 old units completely owned and managed by the state will be replaced by new homes run by social housing agencies, which do not provide the same guarantees to the most vulnerable residents.

The Police Association. Victoria Police's union has been campaigning for a force-wide roll-out of tasers, which was not included in the budget.

Lockdown rule breakers. Fines are one of the very few government revenue lines that have increased, with $911 million expected to be handed over this year speed and red light cameras, toll evasions, on-the-spot fines, court fines and other non-traffic infringements.

Some struggling businesses. Further rounds of cash grants were not featured in the budget.

Farmers. The Victorian Farmers Federation wanted significant investment in roads and rail, including the completion of the Murray Basin Rail Project. That was not forthcoming, with only $50 million provided of the almost $250 million required. And there is little else to help the sector bounce back from natural disasters and a trade war with China.

Electric car owners. Over the weekend the government announced it would introduce a tax on zero-emissions vehicles that would net $30 million over four years. Less money – $25.2 million – was included in today's budget for the "acceleration of adoption of zero emissions vehicles". This combination makes an already stifled industry in Australia less attractive to consumers.

Arts workers during COVID. ABS figures show arts and recreation services were worst-hit in terms of employment during the months leading to August 2020, with more than 30 per cent drop in employment in the industry in Victoria.

Taxpayers. To get the state out of a global coronavirus-induced recession, the state government is borrowing big, with net debt levels set to reach $154.8 billion in 2023/24 – the equivalent of $23,000 per person.

Young people. They are going to be paying for economic damage wrought by the pandemic for decades It will take a long time for debt levels to get back to pre-COVID levels.