Former and current police commissioners and ministers, police association secretaries and other senior bureaucrats will be called to give evidence at Victoria’s truth and justice commission about the harm caused to First Peoples because of failures by the state’s criminal justice and child protection systems.

In a submission to the inquiry on Tuesday, the First Peoples’ Assembly of Victoria – the representative body for Aboriginal and Torres Strait Islander people in the state – also urged the Yoorrook Justice Commission to recommend the urgent establishment of an independent police oversight body. 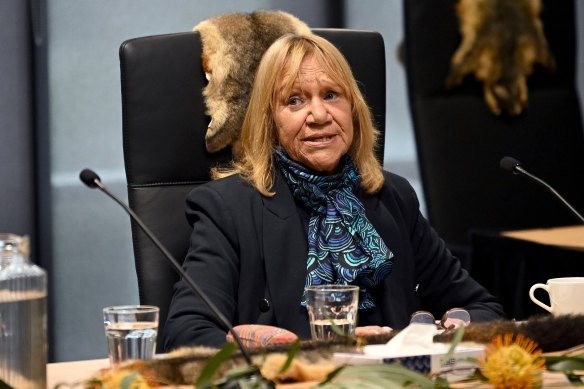 Assembly co-chair Aunty Geraldine Atkinson, appearing as a witness, told the commission evidence from government appointees would be “an essential part of the truth-telling process”.

“They need to be investigated … people need to be interrogated. We need to know, in particular, why certain things occurred,” Atkinson said under questioning from counsel assisting the commission Tony McAvoy, SC.

Atkinson nominated Victoria’s former and current police leadership, relevant government ministers, and senior Department of Justice bureaucrats and executives among those who should be called to give evidence.

The Yoorrook Justice Commission has the full powers of a royal commission, including the ability to call witnesses under oath, compel evidence and make recommendations to government.

Atkinson confirmed that the assembly, in its submission, wanted the Yoorrook inquiry to investigate the “historic, colonial origins of the youth justice system of Victoria, including the impact of state-inflicted interventions”. This would involve looking at the background of the youth justice system and analysing the effects it had on First Peoples in Victoria today.

The assembly also urged the commission to investigate the links between colonial violence and “the prevailing culture of over-policing, surveillance, criminalisation, and the forced removal of children from their families”. A Bangerang-Wiradjuri elder, Atkinson said there was a connection between what happened in the early years of the Port Phillip colony and what continued to happen in Victoria, particularly regarding the policing of young Indigenous people.

The commission was asked by the assembly to interrogate – and make recommendations and findings relating to the level and extent of – institutional racism within the youth justice system. That would include analysing police stop, search and cautioning data; youth justice court orders; court sentencing; and, decisions made about police involvement in child protection interventions.

Atkinson confirmed the First Peoples Assembly believed the youth justice system to be institutionally racist, and she said its submission requested that the truth-telling inquiry compel evidence from attorneys-general, department of justice and community safety secretaries, commissioners for Aboriginal children and young people, and other witnesses.

An investigation of current bail laws, the use of protective custody laws to detain Aboriginal people, the government decision-making processes that led to the Bail Act reforms of 2017 were also recommended by the assembly, Atkinson confirmed. She said that would include examining to what extent expert advice regarding the potential impact of the “punitive” bail reforms on First Peoples was considered or rejected.

Atkinson said the representative body also wanted the inquiry to investigate the government delays in the decriminalisation of public drunkenness. The offence was supposed to be repealed last month, five years after Yorta Yorta woman Tanya Day, 55, was arrested for being intoxicated on a train before later dying in hospital from head injuries sustained in a police cell.

“(The decriminalisation of public drunkenness) remains a matter of importance and something that should be acted upon urgently,” Atkinson said.

Under questioning from the Yoorrook commissioners, Atkinson said the assembly lacked confidence in police oversight, as did Aboriginal communities around the state. She told the inquiry Aboriginal people avoided making complaints about discriminatory police practises because of the lack of accountability.

Atkinson said the only way to obtain confidence was to overhaul the system, which would include establishing an independent, Aboriginal-controlled, police oversight body.

Atkinson agreed the assembly believed members of the police force “have had some level of impunity in the past”.

“Everything that they’ve done has always been condoned,” she said.