Washington: The top election official in the key state of Pennsylvania has warned voters to stop sending ballots via post amid looming legal fights over election deadlines.

Amid a record early voting surge, 70 million Americans have already cast ballots, more than half the total number who voted in the 2016 election. Most have done so by post. 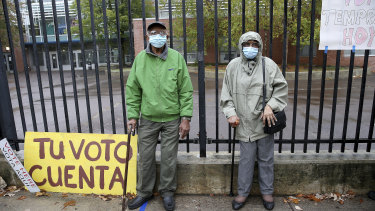 Bill Roane, left, 92, and his cousin, Anna Dixon, 95, wait to cast their vote at an early voting location at the De Burgos Elementary School in Philadelphia.Credit:AP

But Kathy Boockvar, the Pennsylvania Secretary of State, urged voters to cease "putting their ballots in the mail", and to drop them off in person.

It came as Republicans went to the US Supreme Court in an attempt to overturn a Pennsylvania rule that postal ballots arriving up to three days after election day could still be counted.

Joe Biden also denounced the violence, saying: "There is no excuse whatsoever for the looting." 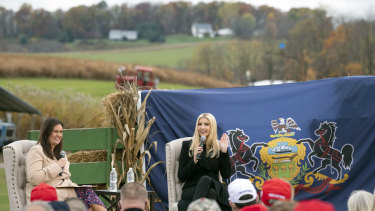 In legal fights over postal ballots, Democrats are attempting to expand the number that can be counted, as more of their supporters vote that way.

Republicans are trying to limit the number of postal ballots, with lawyers often citing an increased potential for fraud. More than 300 cases have been filed in 44 states and in Washington DC.

In a similar case to that of Pennsylvania, Republicans in North Carolina objected to a ruling that postal ballots can arrive up to nine days late, potentially delaying the result in a close battleground state by more than a week. The case is going to the Supreme Court.

In an encouraging signal for Republicans, the court issued a late-night ruling this week rejecting an appeal brought by Democrats in Wisconsin, asking for postal ballots arriving up to six days late to be counted. The court said they must arrive on November 3, by 8pm.

The granular detail of the issues being fought over is illustrated by a case in Nevada, where Trump's campaign is suing to stop the counting of absentee ballots in Las Vegas. Lawyers for his campaign object to election observers being asked to stand 25ft (8 metres) away, arguing they will not be able to see computer screens used by counters.

Trump, in Las Vegas, said: "Hopefully the few states remaining that want to take a lot of time after November 3 to count ballots, that won't be allowed by the various courts. We're in courts on that."

Other battles are being fought over drop-off ballot boxes.

In Texas, a court rejected a challenge against Republican governor Greg Abbott's decision to have only one box in each county. That means there will be only one box for 4.7 million people living in and around Houston.

In Michigan, a judge blocked an order from the Democrat secretary of state, meaning voters will be able to openly carry guns at polling stations.

With less than a week of voting left, experts predict an overall voter participation rate of about 65 per cent, which would be the highest since 1908. But they warned that more than one million postal ballots may end up not counting due to errors, which could affect the result of close races in some states.

"The vote-by-mail ballot rejections are going to be the 'hanging chads' of 2020," said Professor Daniel Smith, a political scientist at the University of Florida, referring to an election-defining dispute in Florida in the 2000 election between George W Bush and Al Gore.

It is predicted around 70 million people will end up voting by post.

Rejection rates for postal ballots are usually about 1 per cent.

The winning margin in some states could be less than the number of rejected postal ballots. Rates for discounted postal ballots are usually highest among Hispanic, black, and young voters, meaning it could benefit Trump who generally performs worse than Biden among those categories.