The severity of Donald Trump's bout of coronavirus will not be known for at least a week, but risk factors including the US president's age and weight significantly heighten his chances of developing serious complications.

Australian infectious diseases physician Sanjaya Senanayake said a person's age, weight and underlying health played a huge role in their chances of survival, along with the healthcare system in country they lived in. In Mr Trump's homeland of the United States, a person has roughly a 10 per cent chance of dying with coronavirus if they are aged 70, he said. 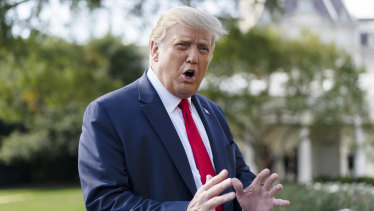 "Ten per cent isn't a small number if we look at is as a death rate, but it still means 90 per cent of people in that age group don't die," Professor Senanayake said.

But doctors also noted that Trump's access to high-quality medical care greatly improved his chances of recovery and survival. Australian infectious diseases physician Professor Peter Collignon said Mr Trump would be being closely monitored by his own team of doctors and nurses.

"Even though he is at home with the virus they will be constantly watching him and checking his heart and breathing for any changes that may be cause for alarm," he said.

Eight out of every 10 deaths attributed to COVID-19 in the United States have been among those 65 and older, and Trump has been reported to have high cholesterol and is also estimated to weigh about 110 kilograms.

While he is considered obese for his height, the president’s doctor has previously said he was in “very good health” last year after his last full medical checkup. Earlier this year, the president revealed he had began taking controversial anti-malaria drug, hydroxychloroquine, proactively and it had caused no adverse effects.

However, a person who is 74 years old has a 90 times higher risk of dying with the virus than somebody who is aged between 18 and 29, and they are five times more likely to end up in hospital, according to the country's Centers for Disease Control and Prevention.

A recent global study on fatality rate of coronavirus found that the risk of dying from the virus increases dramatically as people age partly because of an ageing immune system and also because people who are older are also more likely to have underlying conditions such as diabetes and lung disease that seem to make the body more vulnerable to COVID-19.

'The older you are, particularly if your weight is up, and you have any underlying conditions the more the chance is you will come to grief either you can die or you are more likely to become seriously ill," Professor Collignon said.

Complications such as developing pneumonia are linked to a high coronavirus death rate, especially in patients over 65, or people who have cardiovascular disease or conditions affecting blood vessels of the brain.

"The other side of it is you're probably more likely to have residual fatigue and problems afterwards if you are older," Professor Collignon said. "Donald Trump is in the age group of 70 to 80. So, he's obviously much more of a risk than if he was 40 or 50."

However, Professor Collignon said it was impossible to determine how severely ill the president might become with virus yet. Many people in experience mild symptoms such as a slight cough, slight fever or a headache in the first week before deteriorating at the beginning of the second week.

This is when the immune system becomes wildly over-stimulated and the virus really takes hold, and strange and more life-threatening symptoms start to emerge. This is known as the cytokine storm.

"It really is a waiting game," Professor Collignon said. "We will have watch to closely what happens over the next week or two. You might remember (British Prime Minister) Boris Johnson looked very well for the first week he had COVID and then didn't look so good and then went to hospital and was in intensive care."

In the short term, Trump needs to remain quarantined for 14 days and have his breathing and heart rate closely monitored. The president has paused his election campaign to allow time to do this.

"Most people in their 70s do not die from this virus," Professor Collignon said. "Some people in their 70s only have really mild disease and make a full recovery, but others can end up in intensive care or on a ventilator and have more problems down the track."

Research is also increasingly suggesting the novel coronavirus can inflict lasting damage on the body's major organs, impairing for years the lung and heart functions of those who become critically ill with the disease.

Long-term neurological or cognitive impairment is also possible in a small number of patients with extremely virulent cases, some experts suggest.

Trump is not the first world leader to be infected with the virus during the pandemic.

British Prime Minister Boris Johnson spent a week in the hospital, including three night in intensive care, where he was given oxygen and watched around the clock by medical workers, after being infected with virus earlier this year.

German Chancellor Angela Merkel self-isolated after a doctor who gave her a vaccination tested positive for the virus and Canadian Prime Minister Justin Trudeau worked from home after his wife fell ill.

The White House also got its first COVID-19 scare in early March when at least three people who later tested positive came in close proximity to the President at his private Florida club.

They included members of the Brazilian President’s delegation, including the Brazilian chargé d’affaires, who sat at Trump’s dinner table.