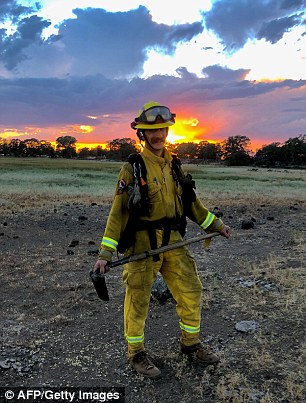 After spending 15 years on Wall Street, Francois Cazalot had had enough and moved out west to become a firefighter.

Today, the Frenchman is one of thousands of firefighters battling raging California wildfires that have claimed nine lives since July and destroyed hundreds of thousands of acres of land.

‘I was tired of that career,’ he said. ‘I wanted to do something more interesting so I moved to California two years ago, and I’ve been a firefighter since.’

From high finance to towering infernos, his current profession is a world apart from the years he spent in New York as a broker and later an interest rates derivatives manager.

But although he is a rookie in firefighting terms, the forty-something with a shaved head, thick mustache, and yellow firejacket darkened by ash has already seen a lot of action.

‘I’ve fought a lot of fires already, five or six in the last year including the third biggest ever,’ he told AFP on a brief break from the frontline, adding he had been deployed to all corners of the Golden State.

‘The scale of the fires and their frequency is relatively new for various reasons. But for us who are rookies, we see more of them and a lot.’ 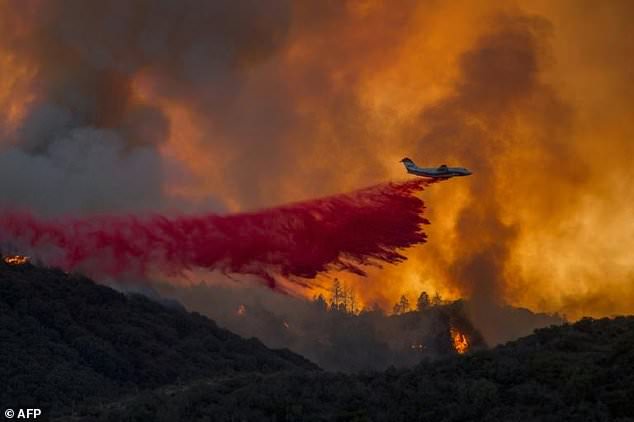 Cazalot says he has been involved in fighting ‘five or six’ wildfires already this year (Pictured: A firefighting airplane drops fire retardant at the Holy Fire) 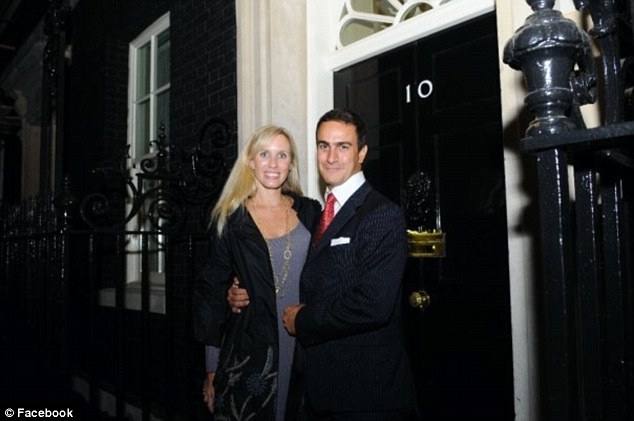 It is a task that is daunting for both the mind and body, he explains.

‘Physically you have long days where you work literally 24 hours straight with no sleep so you´re dehydrated. You’re starving.

‘And there are also psychological challenges: it can be difficult, stressful. You can find yourself in hairy situations when the fire is approaching. You’re in awe, you’re afraid.’

Some 14,000 firefighters – including some from as far away as Australia and New Zealand – have been deployed to 20 sites in this fire-prone state.

In a command center in the town of Ukiah in Mendocino County, where the biggest fire on record in California is being fought, daylight is eclipsed by the smoke that covers the entire region.

The sun is but a small orange dot in the middle of a gray horizon.

Red, yellow and green trucks are parked side by side. When they are away from the front line, their windows are cleaned, engine fluids checked, equipment inventoried, hoses reeled. 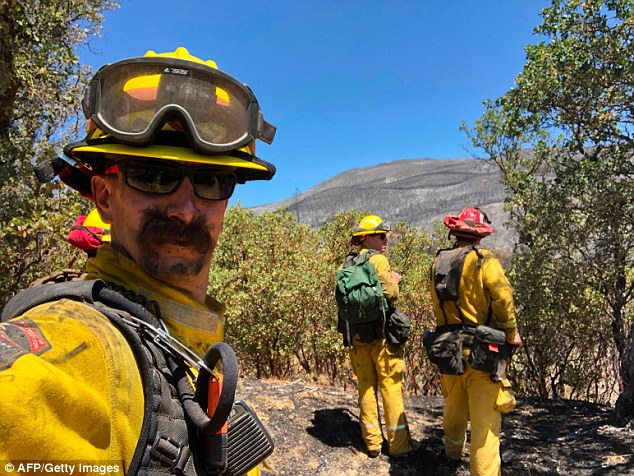 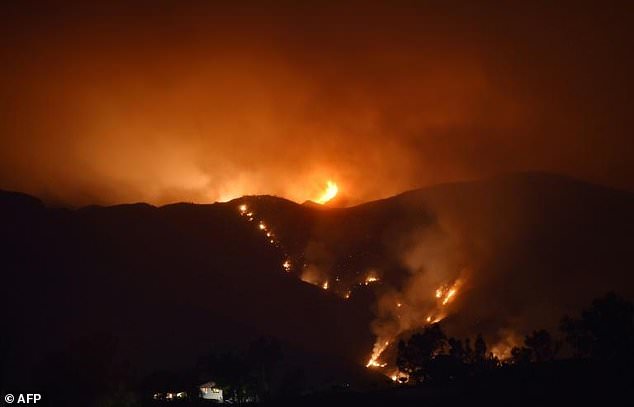 Some 14,000 firefighters – including some from as far away as Australia and New Zealand – have been deployed to 20 sites in this fire-prone state (Pictured: The Holy Fire burns in the Cleveland National Forest in southern California) 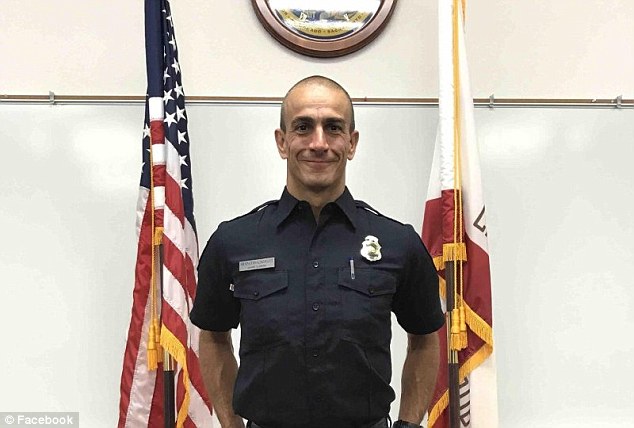 Cazalot was presented with his CalFire pin in September last year and is still a rookie, though he is gaining experience at a rapid pace due to bigger and more common wildfires

Everything has to be perfect before going out to face ferocious flames fed by high temperatures, low humidity and strong winds.

Firefighter Bennet Milloy is about to be redeployed to the line, and says the blaze is among the most aggressive he’s ever seen.

‘The plan is to stage here. The resources go out to the line, and at 2 o’clock when the fire becomes more active, they’ll pull us and put us in the areas where the fire is the most active,’ he said.

‘From what I’ve observed throughout my career, the fire is very active in the early afternoon. It’s spotting way out front of itself… it’s really aggressive and it’s really difficult to keep it within the containment lines.’

A meeting with the fire crew is held daily to discuss the situation on the ground.

In a white tent with a red, white and blue US flag on top, an official with a map gives a briefing on how the drama is unfolding. 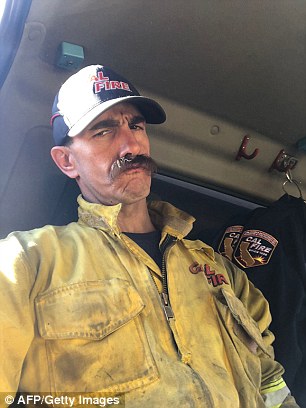 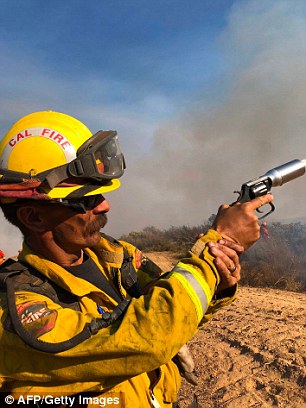 Firefighters in California are briefed in detail each day on weather conditions that could impact on how the fire progresses (Cazalot is pictured on the job: Holding a flare gun to keep a fire at bay by backburning right)

‘The purpose of the brief is mostly safety. We want our firefighters to know all the conditions that they´re getting into when they go out there,’ said Kevin Sweeney, a spokesman for CalFire.

‘Know what the firefighters have been doing over the past operational period, also to have an understanding what the weather might be doing for the day.

‘So it´s really to keep our firefighters informed, keep them safe,’ he added.

Cazalot also points to the protocols established by the agency as it fights bigger and bigger fires each year.

‘CalFire is pretty well organized, though. If you watch after yourself, if you respect the procedures, you’re safe,’ Cazalot said. 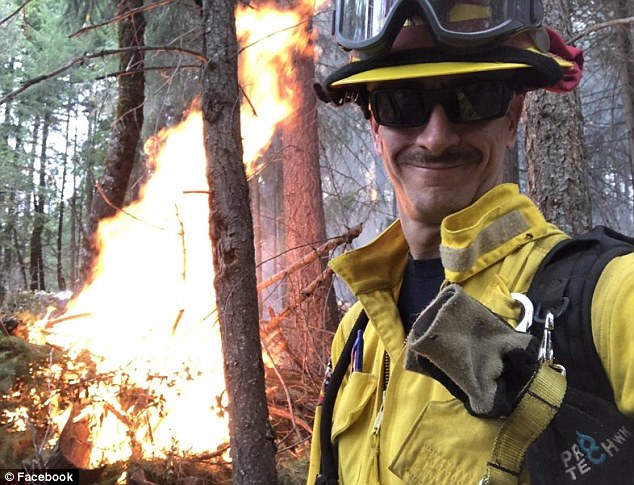 Despite the dangerous nature of the job, Cazalot says the CalFire team take safety very seriously and work hard to keep firefighters out of dangers