Home » World News » 'We have her': Archaeologists to begin testing on Endeavour remains

"I think we can say with a great deal of confidence, based on what we heard today, that this is the resting place of the Endeavour," Walton said, standing before choppy waters and a cloudy sky.

"I'm very confident that we have her."

Walton was standing at the spot where 230 years earlier the Endeavour (renamed Lord Sandwich 2) was scuttled as part of a British plot to keep French ships from entering the harbour during the during the American War of Independence.

Since then the legendary ship – which James Cook sailed to Australia in 1770 – has sat at the bottom off the harbour.

Exactly where has been been a mystery. Until now.

At an event here on Friday afternoon US time (Saturday morning AEST), a team of marine archaeologists from the US and Australia announced they are confident they have identified the Endeavour's final resting place.

"Every indication supports that this is the Endeavour and that is something significant for people around the world," Peter Dexter, chairman of the Australian National Maritime Museum, said. 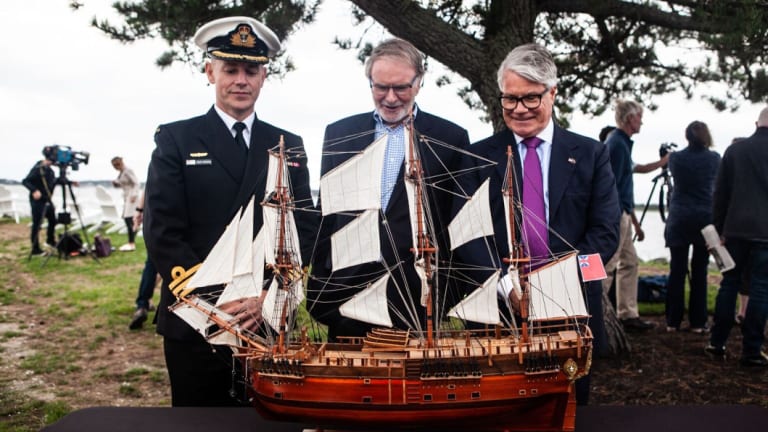 By chance, the ship is located in a place that is already significant for Australians: it was at Newport Harbour where the Australia II won the America's Cup in 1983.

At the event on Friday, researchers presented their fieldwork findings for the past year and explained why they have narrowed the search down to one sunken vessel.

The Endeavour was the biggest of the 13 vessels scuttled in Newport Harbour and the wreckage they have singled out best fits the ship's dimensions.

Archaeologists from the Australian National Maritime Museum will use wood samples taken from the site to definitively prove if the wreckage is indeed the Endeavour.

Unlike most of the other ships scuttled in the harbour, the Endeavour was built in Yorkshire, in the UK, from local materials.

Maritime Museum archaeologist Kieran Hosty, who spent the past three weeks on a diving mission at Newport Harbour, said timber samples will be transported to Australia in coming days and the analysis will hopefully be completed by early October.

He estimated that 10 to 15 per cent of the ship's hull remains intact. Four cannons from the ship have also been identified, and archaeologists are confident they will be able to salvage other artefacts made of glass, leather and wood. 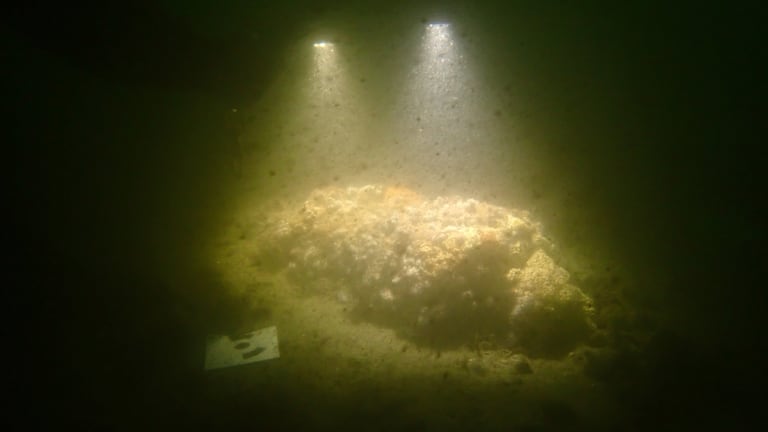 A photograph, taken by marine archaeologists in Newport Harbour, of the remains of what is believed to be the Endeavour

The announcement marked the culmination of a painstaking 25-year search led by volunteers from the Rhode Island Marine Archaeology Project.

Visibility is poor in the harbour's murky waters, meaning divers can often see only up to a metre in front of them.

Maritime Museum curator James Hunter on Friday unveiled new 3D images of the wreckage that have been compiled from 10,000 separate photos.

Australian Navy Commander Doug Theobold said he believed confirming the ship's identity was now just a matter of "dotting the i's and crossing the t's".

He added: "I would like to see some of it back in Australia."

While many Australians would undoubtedly agree given the ship's significance to the country, the fleet of vessels at Newport Harbour are the property of Rhode Island. It will be up to local authorities to decide how much of the ship's remains they allow to be transported to Australia.

Walton said he would raise the matter with Foreign Affairs Minister Marise Payne next week, who will be in New York for the United Nations' Annual General Assembly meetings.

"Imagine if the Santa Maria (one of the ships Christopher Columbus sailed to America) was found in Botany Bay or Sydney Harbour – it would astonish the Americans," he said.

"This is an incredible story that links our great democracies together."