"We send you strength and share your sadness. We stand against hate."

Messages of support and denouncements of hatred covered Victoria's mosques as people came out in support of Muslims on Sunday following the shooting deaths of 50 people in Christchurch. 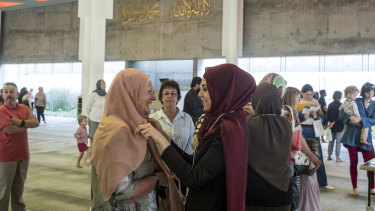 Zainab Badra helps Barbara Hughes of Williamstown put on a hijab at the Newport mosque.Credit:Chris Hopkins

The Islamic Council of Victoria's mosque open day is an annual occurrence, but this year's event took on more significance after the horrific New Zealand attack.

Premier Daniel Andrews visited a mosque in Preston to voice his backing for the Muslim community, saying it was supported and valued.

Australian Brenton Tarrant, 28, was charged on Saturday over the deadly attack, which also left 50 people injured.

Political leaders are grappling with the threat of far-right extremism in the wake of the killings. 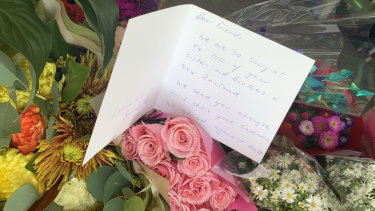 A message of support left at the Newport mosque.Credit:Erin Pearson

At the Australia Islamic Centre in Newport, Richmond resident Bronwyn Morkhan said it was more important now to show support for the Muslim community.

“We must all gain an understanding of one another," she said. “We’ve been told we can come back at any time and I will do that.”

Police Inspector Peter O’Connor said he was humbled to see so many attend the open day, with hundreds, if not thousands, pouring into the prayer room.

“It’s great to see people of all types of backgrounds coming in and bringing their children,” he said.

“At the end of the day, it’s a church like any other, a place for people to gather and reflect.”

Mosque secretary Azzam Bararat said the Muslim community was in mourning after the attack in New Zealand.

But he said he felt humbled and surprised to see so many hundreds of people attending the open day.

“Honestly, we didn’t expect so many people," he said. “It is very nice to have everyone coming together to show the spirit of the Australian community.

“We’re very upset; we are a peace-loving community."

“Every day you learn. I’m 90 years old and every day I learn more and that’s what today is all about,” he said. “This is the seed that we planted. It’s working.”

Williamstown Reverend Ron Browning said it was a proud day to see people of all faiths turn out to support the Muslim community.

“Solidarity is so important after what’s happened in New Zealand,” he said.

Former Victorian premier Steve Bracks has a longstanding history and friendship with those at the Newport mosque.

He said most people involved in the mosque hail from a place called Mish Mish, north of Beruit.

“I’ve visited the village and the people are so friendly,” he said.

“They’re great people and we want to show them support during this difficult time. The perpetrator of evil in New Zealand has caused us all to come together.”

Cards left at the mosque spoke of sadness over the attacks and solidarity with the Muslim community.

"To our Muslim friends and community. We want you to know we stand with you, in your grief.
We are so very sad that this unforgivable crime has happened to you," one handwritten letter said.

"We hope that you know that there are many Australians who feel so deeply ashamed of these terror attacks on your culture, religion and community.

"We feel for you and offer our deepest condolences. There is no room for hate in this world."

"We've been devastated for the past couple of days just seeing what's happened to our fellow human beings," she said. "They were at their most vulnerable."

Ms Merhi said visitor numbers at her mosque's open day were much bigger than in previous years.

She said people had offered apologies and their condolences after the attack. Those gestures had added to her sense of community.
"It's going to unite us more than ever. He didn't achieve anything by doing this at all."