A family of three escaped their blazing home only moments before it collapsed yesterday following an explosion that shook the neighbourhood ‘like an earthquake’.

Neighbours described how a couple and their adult son ran from their semi-detached house in Illingworth, West Yorkshire, just seconds before it was engulfed in a fireball, reducing it to rubble.

The family, named locally as Liam and Gwen McCloughlin, both in their 50s, and son Jack, who is in his 20s, were taken to hospital on Saturday morning for checks.

Dramatic videos posted online show a huge wall of fire swallowing the property following the explosion, which was heard three miles away.

Neighbour Candice Nevison, 37, said she watched one of the family members jump out of a window to flee the house at 7.45am.

Emergency services were called to the scene in Illingworth, near Halifax, West Yorkshire, just before 7.40am today after an explosion at the family home 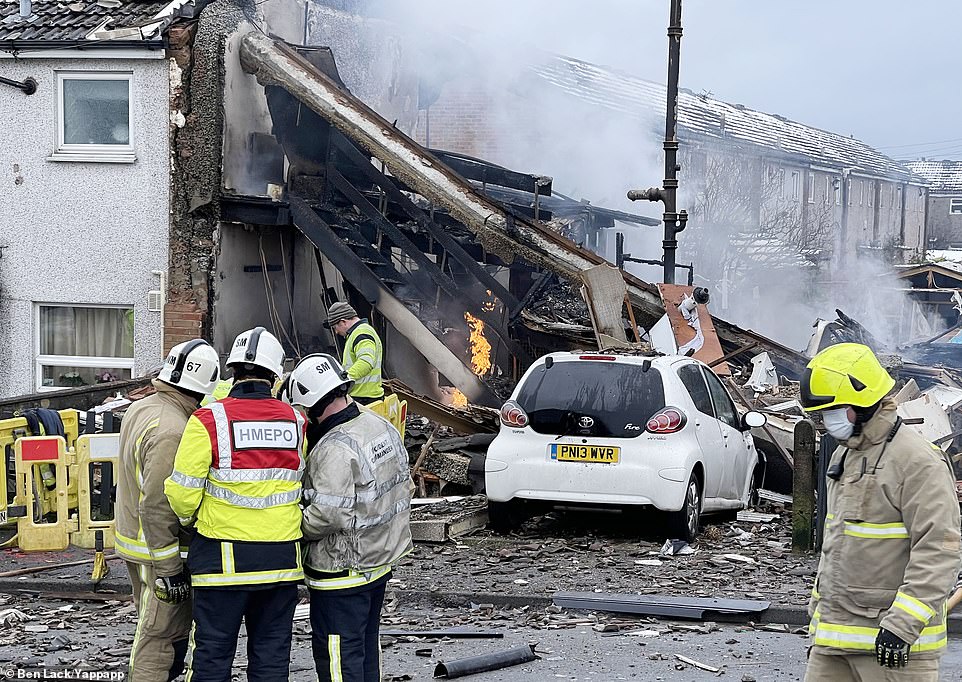 Fire crews at the scene on Saturday morning. They worked with West Yorkshire Police and Yorks Ambulance, Calderdale Council, to tackle the blaze in Illingworth near Halifax 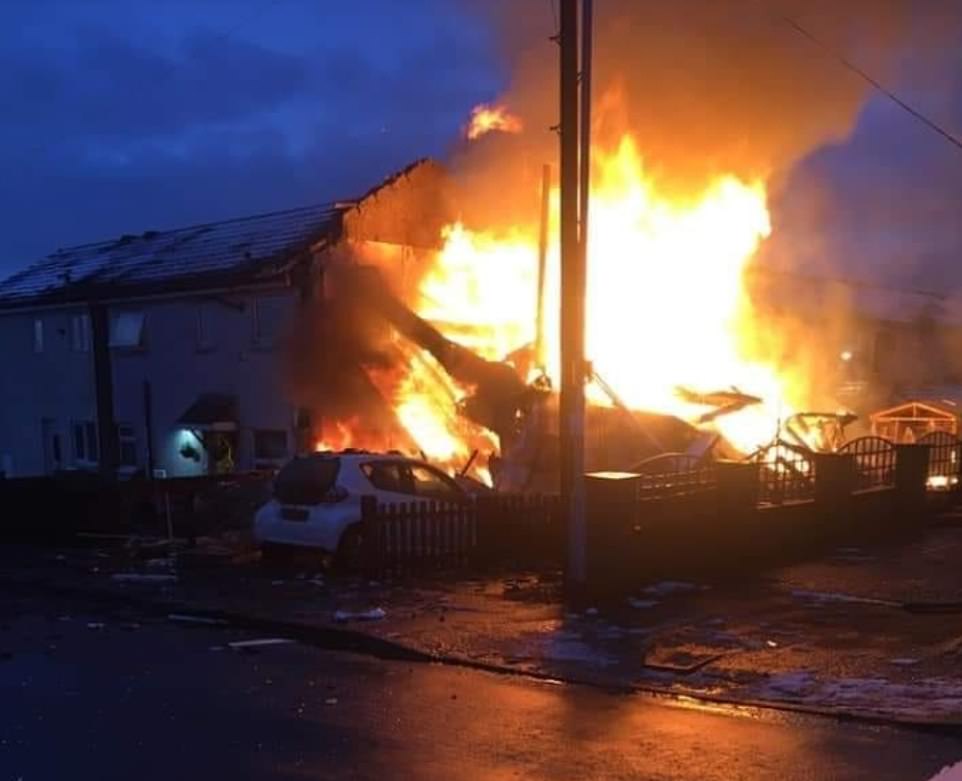 Large flames ripped through the house and the explosion could be heard more than three miles away, according to residents

She said: ‘It sounded like there was a massive bang and it felt like something had fallen on my head. The impact was just so extreme I thought my own house was collapsing.

‘I saw people running out of the house. I saw one person jump out the window while another person carried an older lady over her shoulder.’

Neighbour Tony McElroy, 73, said he was awakened by the blast.

Speaking about the family’s escape, he said: ‘Thankfully they were out of the house when it all collapsed. It was terrifying. I heard a loud bang and thud and when I opened the curtains I had debris flying at me. It all collapsed so fast it was a matter of seconds.’

People living nearby likened the deafening blast to an earthquake, with one tweeting: ‘I am only half-awake but either something just exploded nearby or we had an earthquake.’ 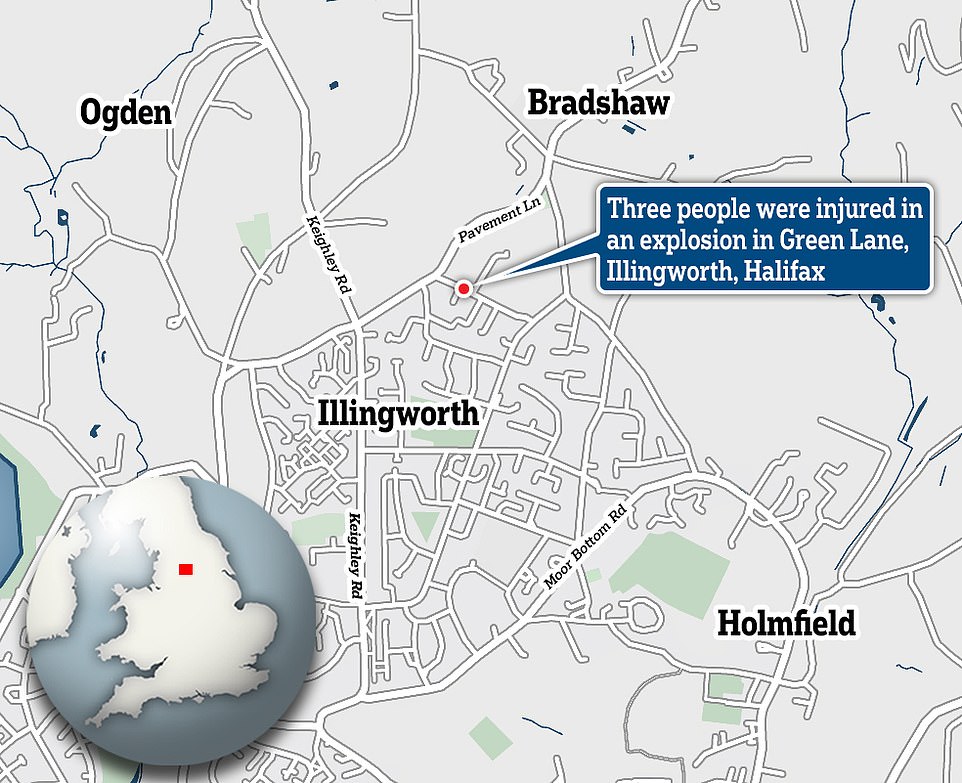 The three people were treated at the scene on Green Lane in Illingworth, Halifax, before they were taken to hospital for further treatment

One man said he got a phone call from his mother, about a mile from the explosion, adding: ‘She heard a huge bang like an explosion… It was heard and felt in Denholme, more than three miles away.’

Neighbours have banded together to help the family, including setting up a fundraising page to collect donations from well-wishers.

Residents in six surrounding houses were evacuated as a safety precaution, including a 98-year-old, according to locals.

A West Yorkshire Fire and Rescue Service spokesman said yesterday: ‘Crews are dealing with any remaining pockets of fire which are being extinguished should they appear. Firefighters are likely to be on the scene for some time. Investigations are continuing into the cause of the explosion.’

Engineers from the local gas company also attended the scene.

Yesterday, another neighbour, who described the massive blast as ‘surreal’, was told that three people in the property were taken to hospital with burns.

Colin Stone, 56, said: ‘I just got out because I thought my house had exploded. The whole street thought so – it was surreal.

‘We were told by fire marshalls that they got taken to hospital with burns, I hope they’re ok.’

Shortly after 1pm, the West Yorkshire Fire and Rescue Service said the blaze had been extinguished and firefighters on the scene were making the area safe, as investigations into the cause of the blast continued. 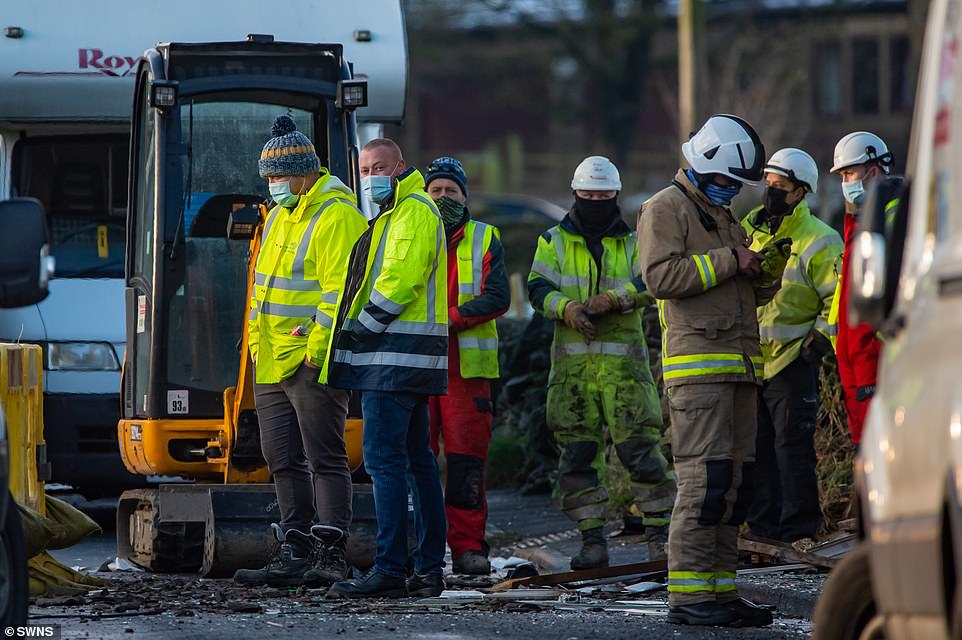 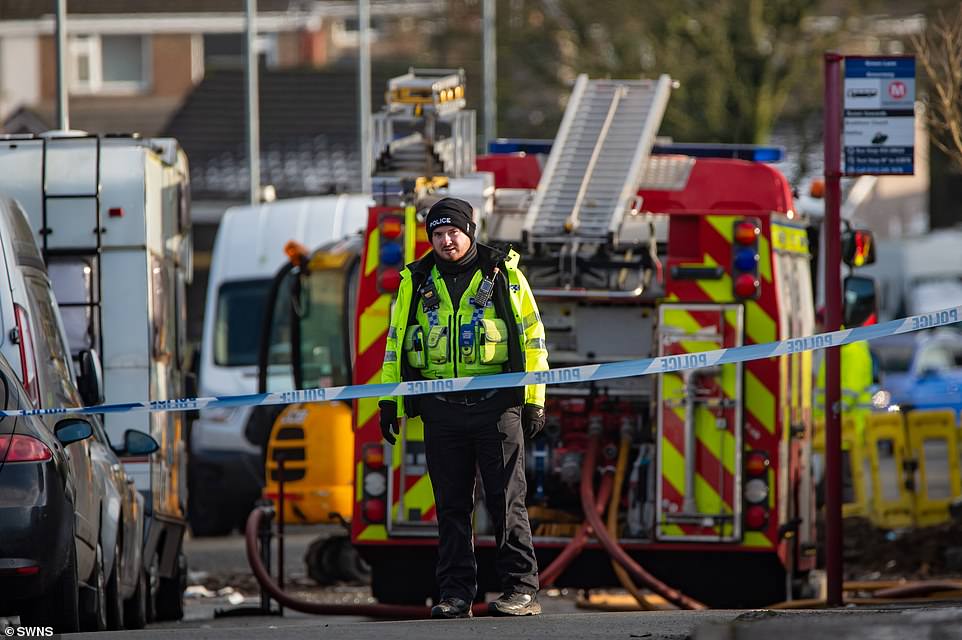 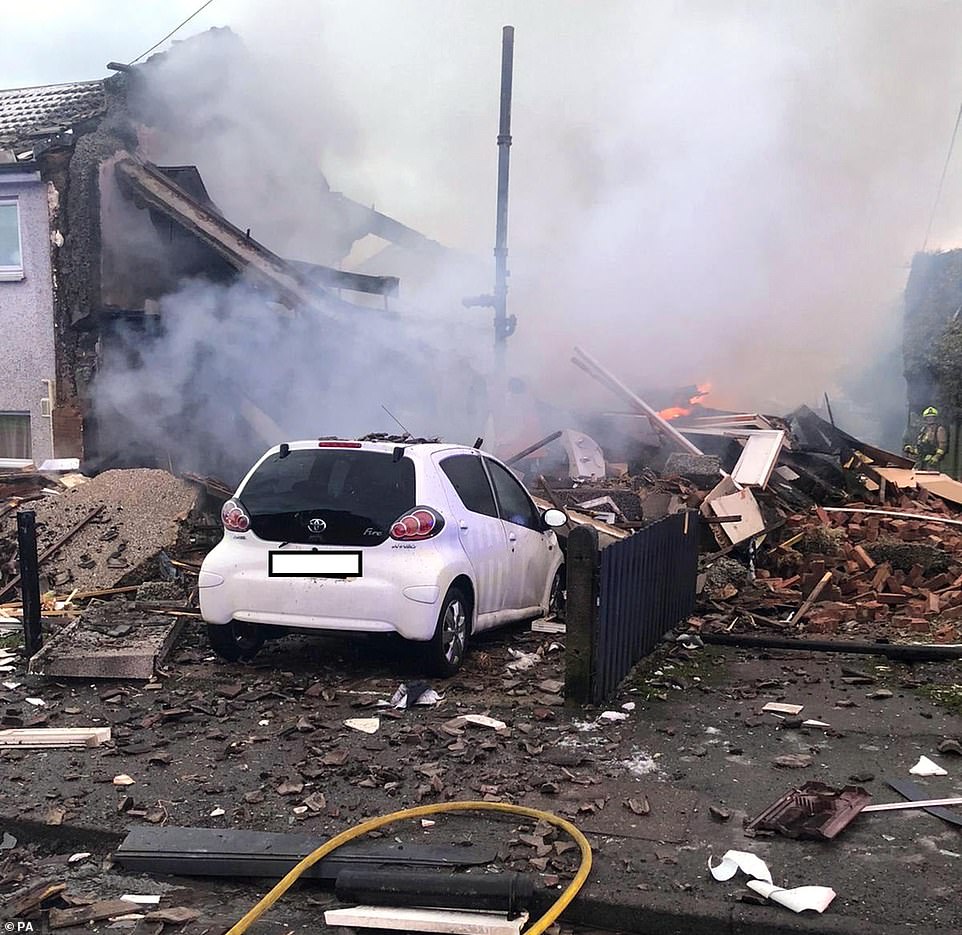 West Yorkshire Fire and Rescue group manager Benjy Bush said they were not ruling out the possibility that a gas leak may have caused the explosion.

But he said it was too early to determine the cause and efforts were focused on securing the area after the ‘extensive and significant damage’ caused by the blast and subsequent fire.

Mr Bush added: ‘We don’t know yet what caused the fire. We were called to reports of an explosion and sent four fire engines which is our standard protocol.

‘There was extensive and significant damage to the building when we arrived. One elderly woman was being looked at by a neighbour, but everyone had escaped when we arrived.

‘Thankfully they all got out and are now recovering in hospital.’ 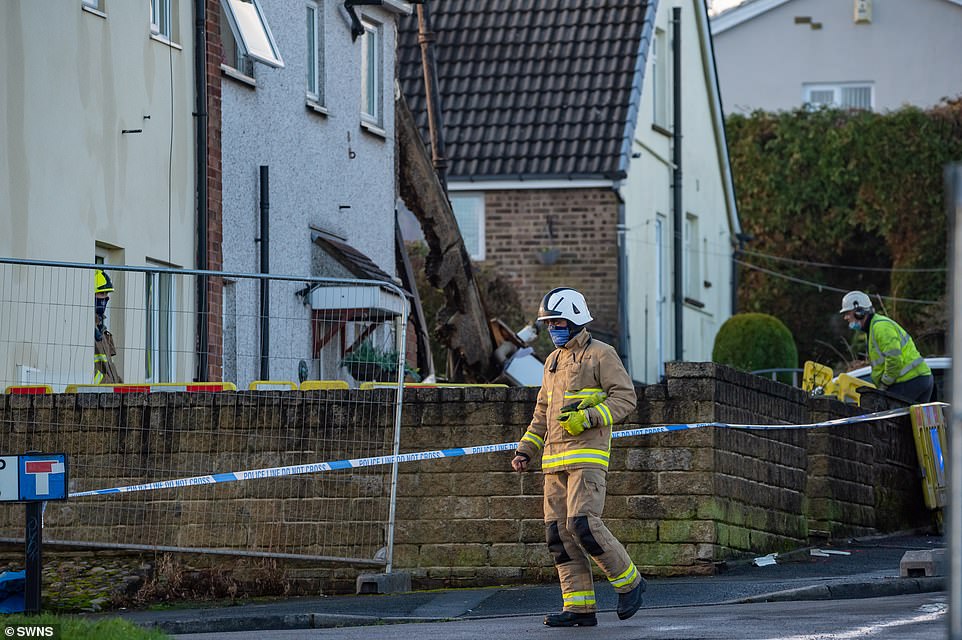 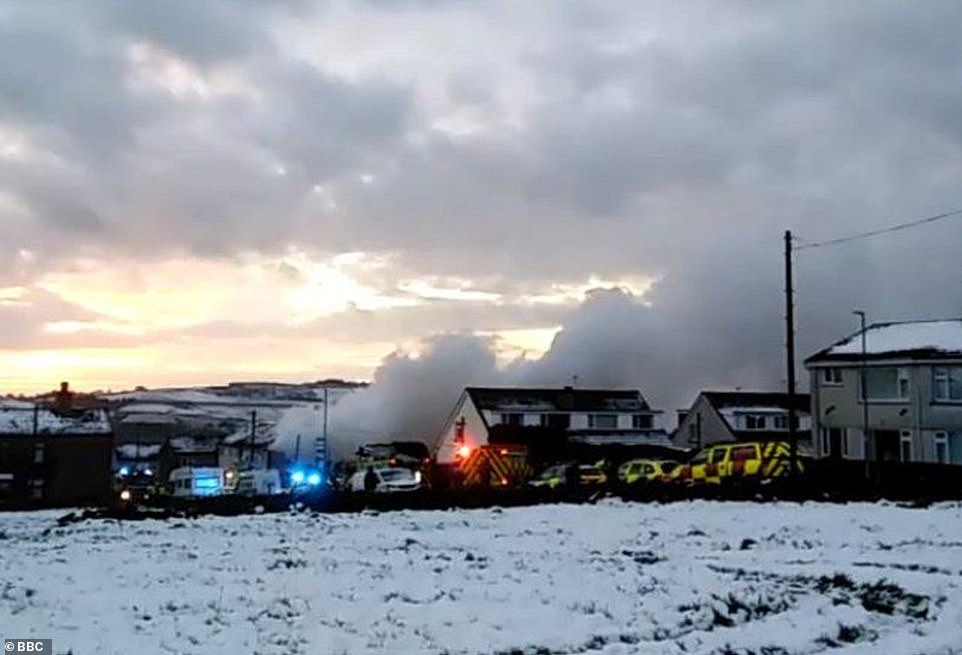 The explosion destroyed one building, but residents in six surrounding houses were also forced to flee their homes as a safety precaution

One resident, Michael Dunn, said he got a phone call from his mother in Denholme, more than three miles from where the explosion took place, after she heard a ‘huge bang’.

Mr Dunn said: ‘Just had a call from my mother in Bradshaw, she heard a huge bang like an explosion upstairs so called up to see if everything was okay.

‘There were emergency services everywhere, and a five minute walk away this house had disappeared, it was heard and felt in Denholme.’

Aerial photographs showed the devastating damage caused by the explosion which could be heard more than three miles away and made an entire house ‘disappear’.

Footage from the scene revealed plumes of smoke billowing into the air and debris strewn across the street as firefighters tried to control the ‘remaining pockets of fire’.

Fire crews have been working with West Yorkshire Police and Yorks Ambulance, Calderdale Council and utility companies to deal with the aftermath of the explosion.

The incident was initially attended by crews from Fairweather Green, Halifax and Odsal with specialist units from Cleckheaton and Dewsbury.

A large cordon remains in place and the fire service said crews are likely to be on the scene for some time.

And another person, whose father had been evacuated, wrote: ‘It’s mad how everyone is fine. How do you anticipate an explosion like that and get out in time??? My dad’s been evacuated. Hoping to get back in later today.’

Following the blast, neighbours have begun a fundraising effort on Facebook for those involved in the blaze.

‘We from the Illingworth community should all come together and support this family as much as we can … let’s get this community support going as soon as possible,’ wrote one member of the public.

Some offered to donate clothes and food to the family via local businesses and charities.

One person added: ‘Does anyone know what’s needed etc, I don’t live far away if. We can help in Anyway we will!’ 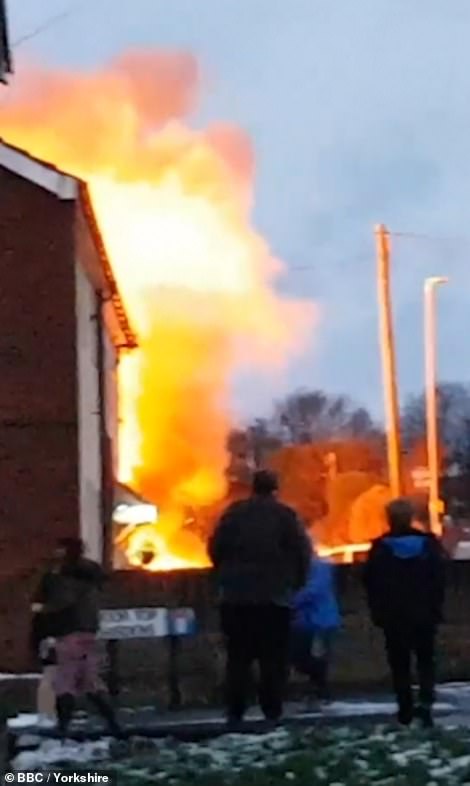 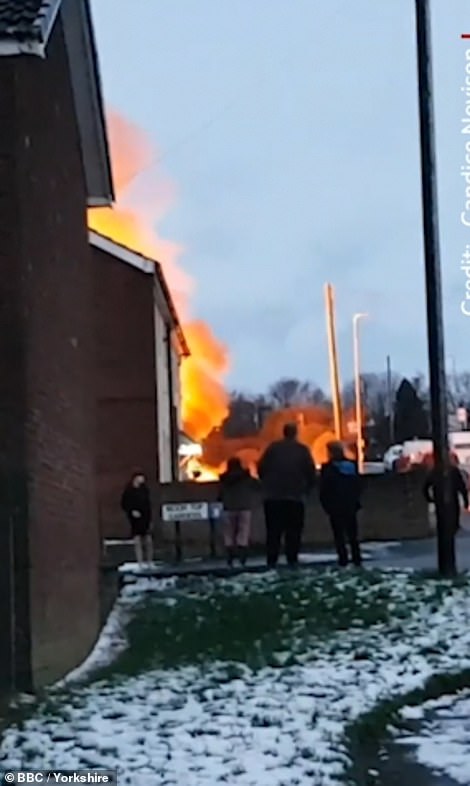 Residents were left in shock as flames engulfed the family home. It is not clear what caused the explosion 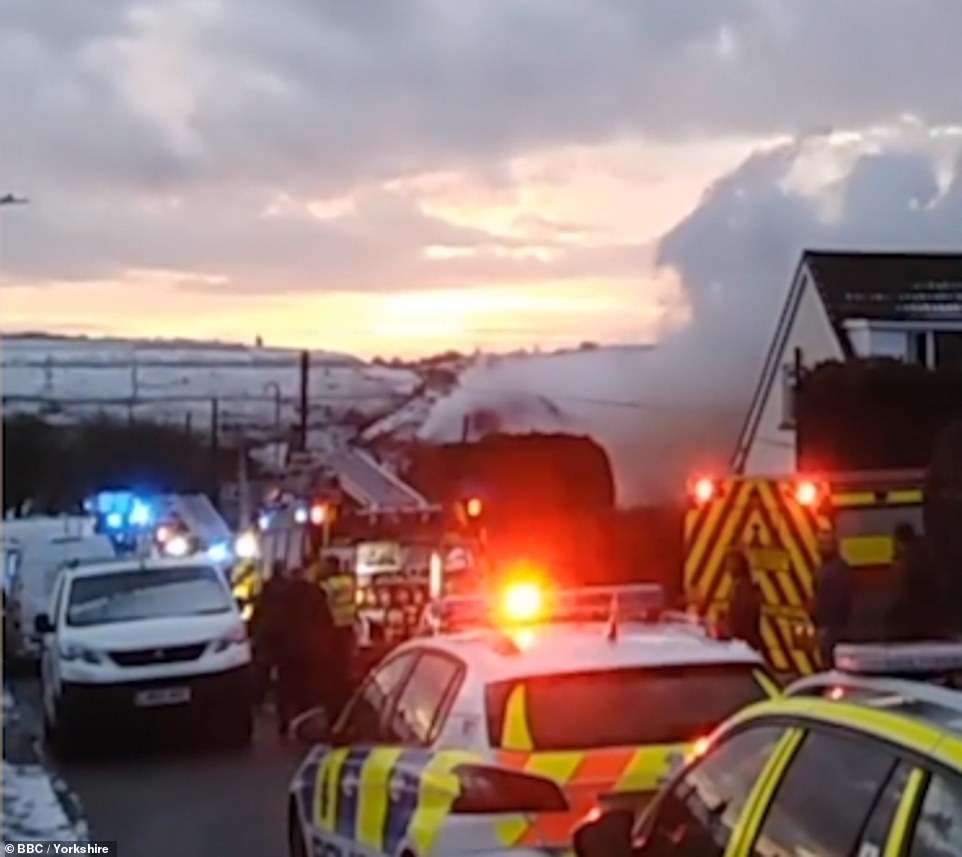