Home » World News » What tier is MY area? Full list of every Tier 1, Tier 2 and Tier 3 area in England

MOST of the South and East of England will be under harsh Tier 3 Covid measures in the run up to Christmas, it was announced today.

Health Secretary Matt Hancock announced the changes to the Tiers system after officials were locked in crunch late-night talks. 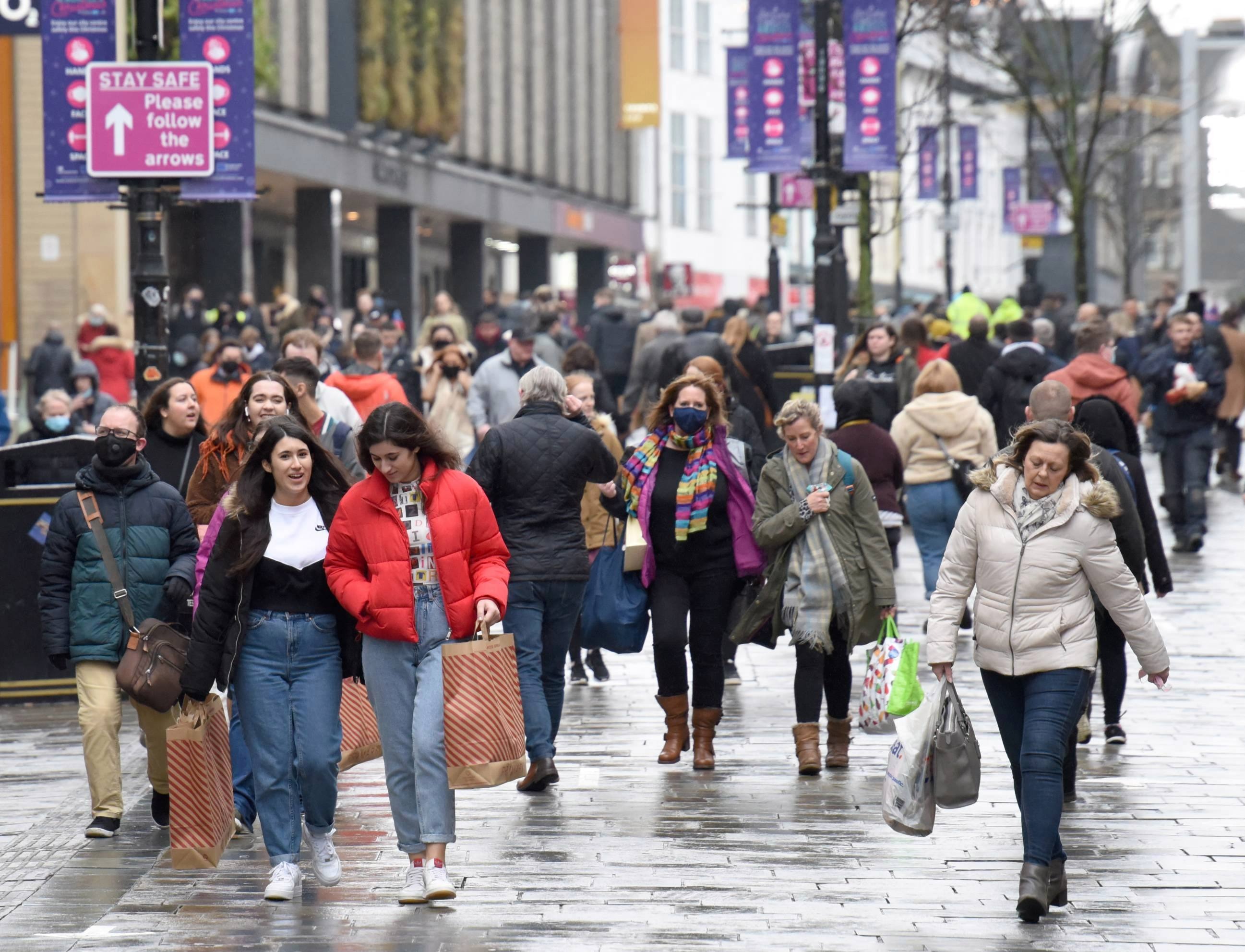 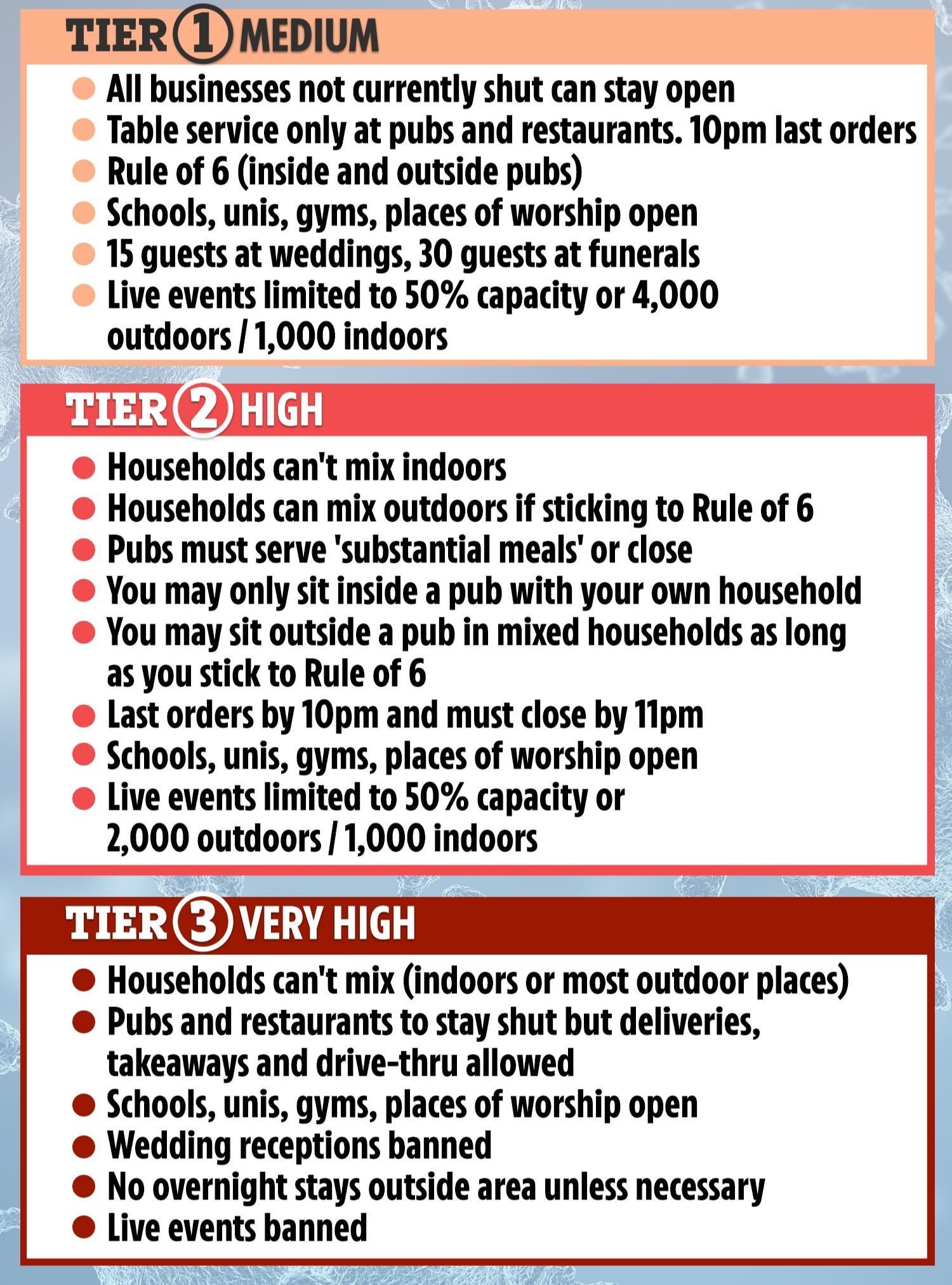 The changes will take effect from one minute past midnight on Saturday morning.

Mr Hancock said Tier 3 measures will be introduced in areas in the East and South East of England, including Bedfordshire, Buckinghamshire, Berkshire, Peterborough, the whole of Hertfordshire, Surrey with the exception of Waverley, Hastings and Rother on the Kent border of East Sussex, Portsmouth, Gosport and Havant in Hampshire.

Some areas will drop down a Tier.

Bristol and North Somerset, will come out of Tier 3 and into Tier 2 on Saturday, while Herefordshire will move from Tier 2 and into Tier 1.

Mr Hancock said Covid cases in the South East were up by 46 per cent, while hospital admissions had increased by more than a third.

In the East, cases were up by two-thirds and hospital admissions had increased by half.

The Health Secretary said the best way to get out of strict Tier restrictions was to "pull together".

"In most places, we're not quite there yet," he said.

The changes come after NHS bosses urged the Government not to drop any Tier 3 areas to 2.

Boris Johnson was last night warned there would be riots if he forced cities with low Covid rates to remain in Tier 3.

Yorkshire and The Humber

London, parts of Essex and Hertfordshire moved into the top tier on Wednesday after a "sharp rise in cases" and the detection of a new strain of Covid that is believed to be spreading faster than the original.

Speaking to MPs on Monday, Matt Hancock said that in some areas cases are doubling in as little as seven days.

The Health Secretary said: "When the virus is growing exponentially, there is not a moment to spare."

Greater London, the South and West of Essex and the south of Hertfordshire were plunged into Tier 3 from 12.01am on Wednesday.

Mr Hancock said: "Hospitals across the countries of Essex and Kent are already under pressure, and we know the doubling of cases will be mirrored in hospital admissions, and it only takes a few doublings for the NHS to be overwhelmed."

The emergency plans will mean pubs and restaurants will be forced to shut.

People in Tier 3 are not allowed to meet up with anyone from outside their household, except for in outdoor public places such as parks.

And in Hertfordshire, the areas in Tier 3 were Broxbourne, Hertsmere, Watford and the Three Rivers local authority area.

Mr Hancock said at the time: "This action is absolutely essential, not just to keep people safe, but because we've seen early action can help prevent more damaging and longer lasting problems later."

The new system was given the green light after being approved by MPs despite a strong backbench rebellion.

After a four-week lockdown, London initially avoided Tier 3, which allowed pubs and restaurants to remain open.

Mr Hancock said the decision over what Tier each area is put into depends on five crucial indicators.

The most important factor is the anticipated pressure on local NHS services and whether there is a risk it could become overwhelmed by soaring case numbers.

But Mr Hancock stressed there is no "automatic" number of new cases that pushes an area into a higher Tier.

Another factor is on the nature of an outbreak – if one area has a very high number of cases but it is confined to one school or workplace, then it might not be given stricter rules.

Other indicators are the speed at which cases are rising and falling – as well as the number of coronavirus cases across all age groups, and crucially the number of new infections in the over 65s.

Tier 3 includes areas of “very high” risk, where coronavirus transmission rates are of the greatest concern.

In these areas households are not allowed to mix either indoors or outdoors in private gardens.

Pubs and bars have closed in the very high alert level areas – except for takeaway.

People have also been advised against travel in and out of the areas.

But they will get access to new rapid-result tests for everyone which gives tests in under an hour, a strategy which has seen Liverpool's cases drop drastically.

They hope that means they can easily escape the tougher rules and move down a tier.

Areas in Tier Two – where there is a high risk of coronavirus – are banned from mixing with other households indoors, including in pubs.

When outside, the rule of six applies.

Current social distancing measures, and the "rule of six" outdoors in public and private spaces will continue in this tier.

Pubs must serve a meal with drinks and last orders will be at 10pm with a closing time of 11pm.

Areas in Tier 1 — where there is medium risk of the virus — will be subject to current social distancing measures, the “rule of six” and pubs can stay open until 11pm.

Weddings and funerals can go ahead with restrictions on the number of attendees.