What We Know About Megan Thee Stallion's New Album - WSBuzz.com
Skip to content

For Megan Thee Stallion, 2020 was a year filled with ups and downs. Last year, Tory Lanez was charged with shooting the rapper in the foot. Then, after taking some time off to recover, Thee Stallion delighted fans with her debut album, appropriately titled “Good News.” Her hit single “Savage”, and the record — which includes her “Savage” remix featuring Beyoncé — earned the rapper three Grammy Awards and four BET Awards. Not to mention, 2020 was the year she and Cardi B released their smash-hit “WAP.”

And now, the rapper seems to be preparing for her second studio album, following the June release of her viral single “Thot S**t.” To get her Hotties all the more hype about her new music, the rapper flaunted her rapping skills in a new Instagram freestyle video, posted on August 12. “Had to bring this beat back,” she wrote in the caption. “I don’t announce my moves, I like to keep s**t private / You know a bi**h been working when I been too solid,” she raps.

“FREESTYLE QUEEN, Nobody compares. Ate it up,” one excited fan commented. “Vocabulary don’t go pass period!!!! wheww disrespectful,” another wrote, referencing a particular bar from the freestyle. “Always been the hardest out,” a third fan commented. So, judging by the comment section, it’s pretty safe to assume that Meg’s fans can’t wait for her new music to drop. But what can they really expect from Megan Thee Stallion’s awaited new album? Scroll on to find out.

If you or someone you know is dealing with domestic abuse, you can call the National Domestic Violence Hotline at 1−800−799−7233. You can also find more information, resources, and support at their website. 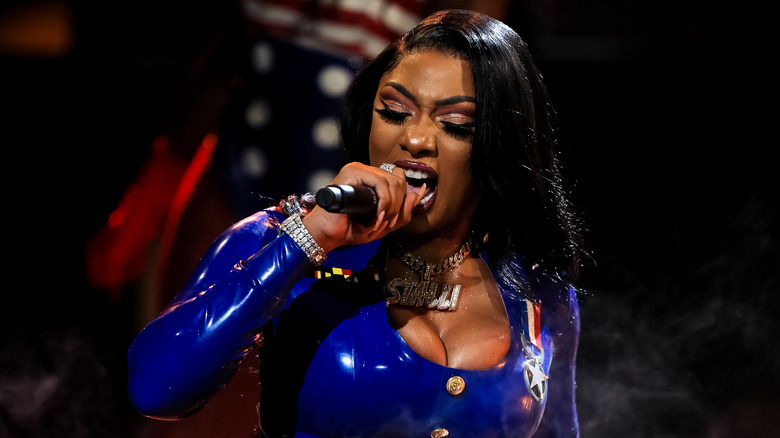 In a recent interview with ESSENCE, Megan Thee Stallion spoke about her rise to fame, being from Houston, and (of course) new music. Though she refused to reveal too many details about her upcoming new project, it seems like the rapper will be bringing back her feisty “Tina Snow” persona. “I feel like [my new album] will be aggressive,” she said.

“I feel like this project is definitely something very well thought out,” Meg continued. “This project is me talking my s**t, getting back comfortable with myself, getting back to the Megan that was on the come-up.” The rapper also discussed her love for freestyle rap, which she attributes to her hometown. “Being in Houston, in Texas in general, I feel like getting in a circle and freestyling is just what we do.” She continued: “It doesn’t matter where you at, who you with, somebody is going to do a rap battle,” she continued, noting that she wanted to show off her talents, too. “I wanted to make sure I was always sharp and I could do it,” the “WAP” artist explained.

Megan Thee Stallion’s many hits have certainly proven her right — and it sounds like this next album will only bring her artistry to another level.