Holiday travel plans were thrown into chaos on Friday when a cluster of coronavirus cases in Sydney’s northern beaches sparked new travel restrictions just a week out from Christmas.

Victoria is not shutting its border to people travelling from NSW, much to the relief of those visiting their families for the break, but it is introducing a new mandatory permit system that people will need to be aware of. 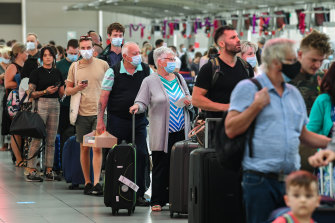 While people are being urged not to travel to or from Sydney, authorities are aware that many already have plans to do so.

The new process will be in place from midnight on Friday and is expected to operate for “a couple of weeks”, according to Chief Health Officer Brett Sutton.

What are the different zones?

Victorian authorities have split NSW into three zones: red, amber and green. The red zone covers people in the Northern Beaches Shire local government area at the centre of this latest outbreak.

Greater Sydney is considered to be on amber alert, while the rest of NSW is seen as the lowest risk and is in the green zone.

Those who have been in the red zone will not be permitted to enter Victoria from midnight on Friday onwards. If they do so they will be sent to hotel quarantine, as international arrivals are, to be isolated for 14 days.

Does everyone need a permit?

Yes, everyone travelling to Victoria from NSW will need a permit, even those living in the green zone.

How do I get a permit?

Permits will be available from the Services Victoria website.

The application process is not online yet, with people asked to check back in at midnight on Friday. It takes five minutes to secure a permit.

Do I also need to be tested?

If you are coming from the amber area, you will also need to take a COVID-19 test when you arrive in Victoria and isolate until a result is provided. A testing site will be set up at Melbourne Airport to facilitate travellers.

Green zone travellers should get tested if they have any symptoms.

How will my permit be checked?

For those travelling by plane, the state government is working with airlines to get their permits checked pre-flight. However inspections will also be performed on arrival at Melbourne Airport and Albury, Mildura, Bendigo and Avalon regional airports.

Other forms of identification, such as a drivers licence, will not be needed to prove place of residence.

Travellers are told to expect significant delays while these checks are completed.

What about the border communities?

The last border closure caused major headaches for towns on the state line.

There won’t be any checkpoints this time around, with Victoria Police officers patrolling roads further in from the border to check for permits.

What if I’m travelling from Melbourne to Sydney?

There are no rules around travelling from Victoria to NSW, however the same rules around permits will apply for those who want to return.

Victorians are being advised not to travel to Sydney at all, in case they get caught on the wrong side of a border closure if the situation worsens.

What happens if I already arrived?

The Health Department is contacting all airline passengers who travelled from NSW after December 11. People arriving in Melbourne on Friday were given information about what they needed to do.

Anyone who was in the red zone is required to get tested and self-quarantine for 14 days from the day they were last in that area.