White House says West Wing bathrooms, the Jackie Kennedy Garden and the East Room will undergo ‘needed’ renovations while the president is at his golf club

President Trump and traveling staffers will return to the White House after an extended stay in New Jersey to upgraded restrooms and a renovated dining facility.

The East Room, the terrace that connects the East Wing to the residence and the Jackie Kennedy Garden are also on a list of areas that the undergoing repairs.

A spokesperson for the White House detailed the maintenance that’s taking place after claiming on Monday that Trump is spending the week at his Bedminster golf club because of ‘needed renovations’ to West Wing work spaces.

The Oval Office was initially on the list of rooms under construction. It was not mentioned, though, in a subsequent statement.

‘It is a priority of President Trump’s to ensure safety on the White House Complex and continue to preserve the history of “The People’s House” for the next generation of Americans,’ a Tuesday statement from the White House explained. ‘Many of the renovations have been planned for several years and are critical to be completed now.’ 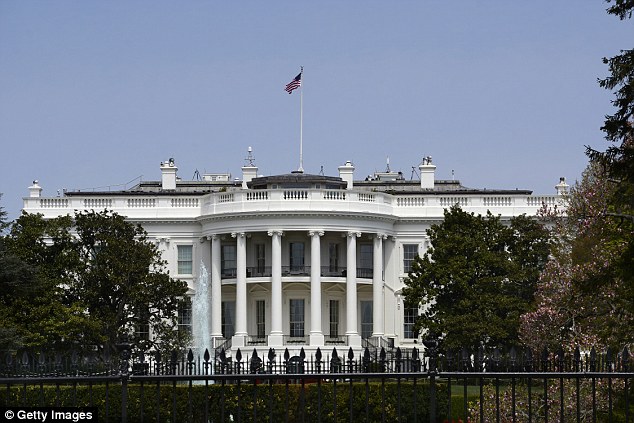 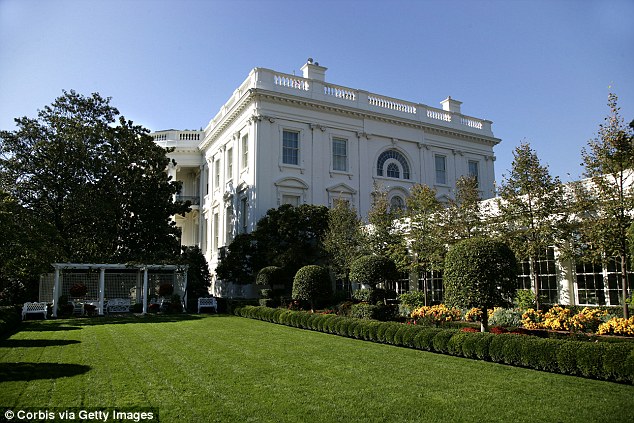 The East Room, the terrace that connects the East Wing to the residence and the Jackie Kennedy Garden (pictured) are also on a list of areas that the undergoing repairs 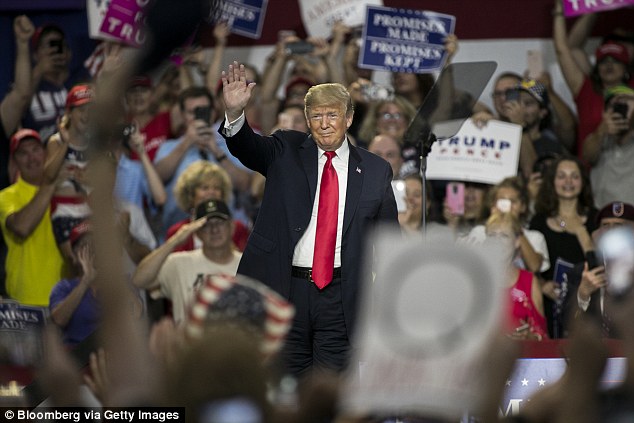 Trump has been at his Bedminster property since Thursday; he’s seen here during a day trip on Saturday to Ohio

According to the White House, all the materials that are being used in the renovation were made in America.

The Navy Mess, where White House staff dine, and the West Wing elevators are undergoing repairs this week, according to the list. Cracks in the East Room ceiling that are ‘creating a safety concern’ for the first family and visitors are being repaired.

‘The restrooms on the ground floor and second floor of the West Wing have not been modernized in approximately 40 years,’ the list of repairs says. ‘The planned infrastructure improvements will address safety concerns and will include durable materials and finishes.’

No mention was made of the restroom the president uses when he is in the Oval Office, but the description of repairs to bathrooms in the West Wing suggests it’s a target.

Trump is said to have called the White House a ‘dump’ during an outing at his golf club in Bedminster, New Jersey, last year.

He has denied making the comments that a golf journalist said were overheard by at least eight people.

‘I love the White House, one of the most beautiful buildings (homes) I have ever seen,’ Trump tweeted. ‘But Fake News said I called it a dump – TOTALLY UNTRUE.’

Several days later, the president said in a tweet from Bedminster that he was staying at his property because of a ‘long planned renovation’ to the White House during what his staff dubbed as a ‘working vacation’ that lasted 17 days.

Trump insisted on Twitter, though, that he was not on vacation at all.

‘Working in Bedminster, N.J., as long planned construction is being done at the White House. This is not a vacation – meetings and calls!’

The White House said before a trip last summer that the president at his Bedminster golf club because of deferred maintenance known to have been leftover from the previous administration.

No such pretense accompanied this summer’s trip, which began Thursday and was expected to extend through the weekend.

Deputy Press Secretary Hogan Gidley made the claim for the first time in a Monday evening update on the president’s activities that said: ‘While the White House undergoes needed renovations to the Oval Office and other areas in the West Wing, the President remained in Bedminster, NJ.’ 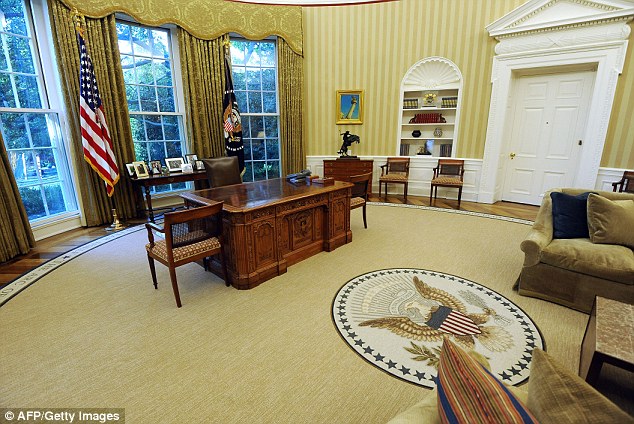 President Trump is spending the week at his golf club, and the White House claims it is because of ‘needed renovations’ to West Wing work spaces, including the Oval Office 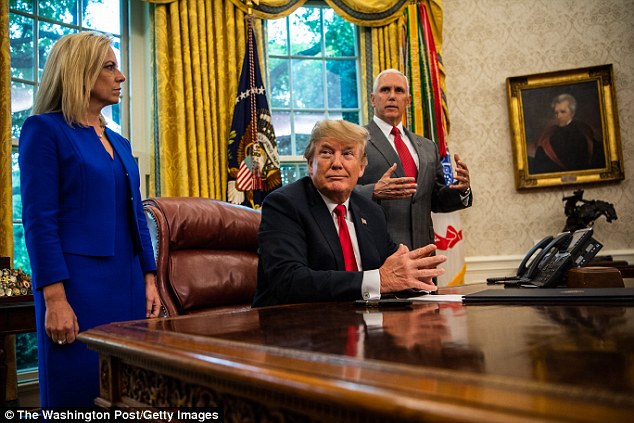 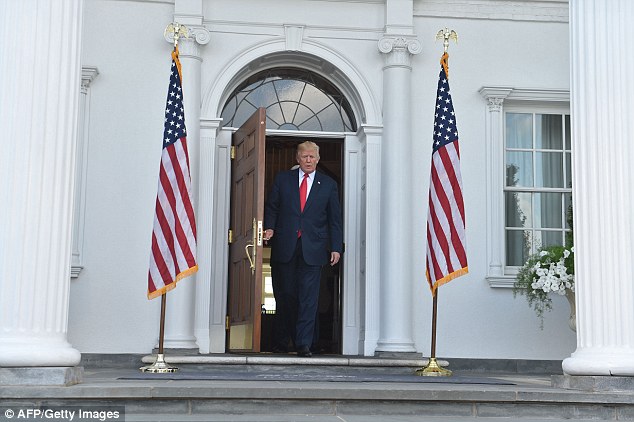 US President Donald Trump arrives to speak to the press on August 10, 2017, at his Bedminster National Golf Club in New Jersey before a security briefing during a trip last summer that the White House said was caused by ‘deferred maintenance’ at the White House

Gidley went on to say that President Trump met with his staff and spoke with Vice President Mike Pence, National Security Adviser John Bolton, Chief of Staff John Kelly and Director of Political Affairs Bill Stepien in the course of the day.

‘This evening at Trump National Golf Club in Bedminster, the President will participate in an NRSC dinner with supporters,’ Gidley said.

Trump’s dinner was closed to press, as was his property, on Monday. If the president, who was sporadically tweeting, golfed at any point, the White House did not say.

President Trump stayed out of sight on Monday – even as he signed an executive order slapping heavy sanctions on Iran – while spending a second day tweeting about California’s wildfires and Russian collusion from the confines of his New Jersey estate.

The White House told reporters early in the day that the president would not make any public appearances until at least the following day.

Trump’s press team then pushed a government handout photo of the president signing a document reimposing sanctions on Iran in response to the president’s decision to leave a 2015 nuclear pact, carefully choosing the only image available of the event.

A more public signing would have provided the first opportunity in days for reporters, who the president called ‘dangerous & sick’ in a weekend tweet, to question him about a string of controversial claims he’s made on Twitter, world events like North Korea’s continued work on its weapons programs and an insult against NBA star LeBron James.

The president’s signing of significant documents is often accompanied by a ‘pool spray’ that offers a rotating group of White House reporters the opportunity to ask him questions.

But the pool of reporters in New Jersey was not invited into Bedminster for the sanctions signing. 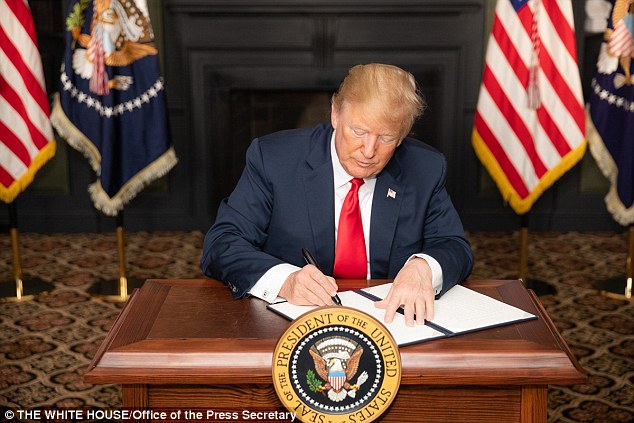 President Trump stayed out of sight on Monday — even as he signed an executive order slapping heavy sanctions on Iran. Trump’s press team sent out a government hand-out of the United States leader signing the document after it barred press from attending 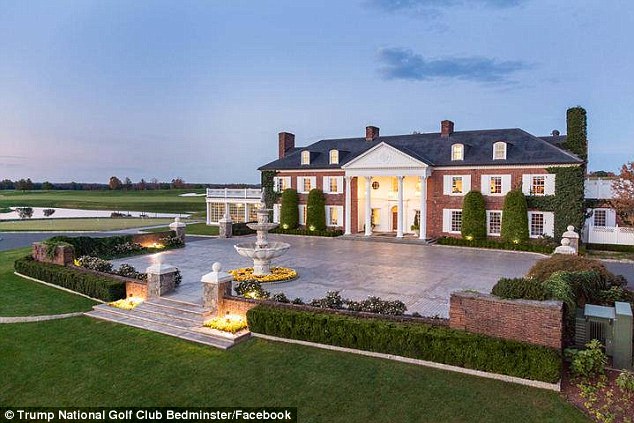 Trump is currently at his Bedminster golf property in New Jersey. He’s expected to remain there through the weekend 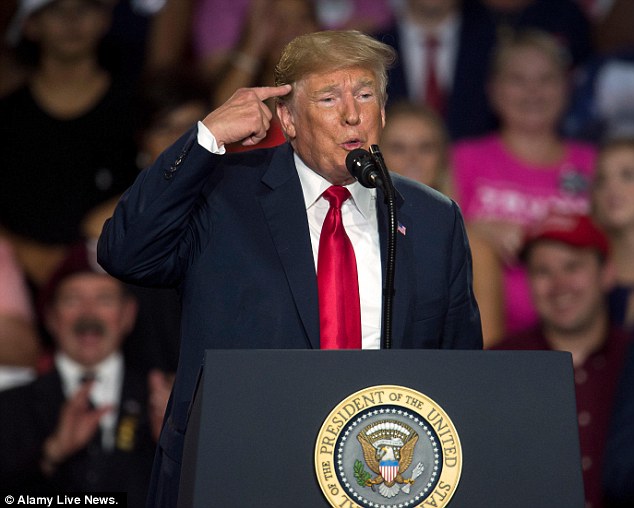 Trump has not been seen in public since returning to New Jersey from a rally on Saturday evening in Ohio. He spent Sunday tweeting about the ‘dangerous and sick’ press, collusion and wildfires

Instead, the president sent out a printed statement on his authorization of sanctions that will go into effect early Tuesday morning against Tehran.

Trump has not been seen in public since returning to New Jersey from a rally on Saturday evening in Ohio that his former communications director, Hope Hicks, was spotted attending with him.

A photo posted to Instagram by a supporter from the same day shows the president had spent his Saturday afternoon golfing.

A statement from the White House on Sunday confirmed that the president golfed for a second time over the weekend, that day with South Carolina Republican Sen. Lindsey Graham.

The White House press secretary said the two men ‘discussed a number of issues including national security and trade.’ No images were made available.

The president has kept journalists at a distance since last Monday, when White House Communications Director Bill Shine informed reporters in his press pool that there would be no questions at a swearing-in ceremony for the new secretary of veterans affairs.

Shine told reporters they could ‘try’ to question Trump, but he wouldn’t be responding. The president had already participated in a joint news conference with a visiting leader at which he took two questions from American reporters earlier in the day.

The swearing-in ceremony for Robert Wilkie was the last time the president came anywhere near reporters. Press traveling with him to subsequent rallies were kept at bay, and journalists in his press pool during his New Jersey vacation were held at a hotel more than 30 miles away. Since arriving at Bedminster on Thursday evening, the president has issued a spate of confusing and newsworthy declarations from his personal Twitter account about a wide range of issues, including the special counsel investigation, that remain unexplained.

He repeated a claim on Monday, without evidence, that California Rep. Adam Schiff had attempted to collude with Russians  a charge that stems from a prank phone call the Democratic congressman unwittingly participated in.

Schiff believed at the time that he was speaking to the head of the Ukrainian Parliament, though, not the Russian government. He directed two Russian comedians to deliver compromising evidence they said they had on Trump to the FBI, or to the congressional committee on which he is the ranking Democrat.

The president also tweeted Sunday, and again on Monday, about deadly wildfires in California that he said are ‘being magnified & made so much worse by the bad environmental laws which aren’t allowing massive amount of readily available water to be properly utilized.’

Trump complained that the water is being diverted into the Pacific Ocean and called for clearing forests as a means of stopping fires from spreading.

Two White House spokespersons did not respond to a question Monday about what Trump’s tweet meant.

In a series of tweets on Sunday the president resumed his verbal assaults on reporters, calling the press ‘fake news’ and the ‘enemy of the people’ and even ‘dangerous & sick’ as he refuted claims that he is bothered by his son’s infamous meeting with a Russian lawyer at Trump Tower in 2016.

Trump insisted that the meeting at which Donald Trump Jr. believed he would receive opposition research on Hillary Clinton was ‘totally legal and done all the time in politics’ and ultimately ‘went nowhere.’ He claimed he did not know about the gathering that his son-in-law Jared Kushner and ex-campaign chairman Paul Manafort also attended.

Manafort is on trial for unrelated charges that were brought in the course of the special counsel probe but are unrelated to the president’s 2016 campaign. Prosecutors have accused Manafort and his deputy Rick Gates of bank and tax fraud. The president has not commented on the case since since the trial started.

But he has otherwise generated new accusations of racism over the weekend in a separate incident after he tweeted about CNN host Don Lemon and basketball star LeBron James, two black men. He said Lemon is the ‘dumbest man on television’ and claimed James has a similarly low level of intelligence.

Trump has kept silent on both fronts since the first lady issued a statement defending James. He remains under scrutiny, however, for his routine claims that Rep. Maxine Waters, who is also black, is a person is lacking in intelligence.

At his Ohio rally on Saturday, Trump said Waters is ‘a seriously low IQ person’ as he lumped her in again with high-profile Democratic leaders.