London: WikiLeaks founder Julian Assange has made a brief court appearance in his bid to prevent extradition to the US to face serious espionage charges.

He and his lawyers complained they weren't being given enough time to meet to plan their battle against US prosecutors seeking to put him on trial for WikiLeaks' publication of hundreds of thousands of confidential documents. 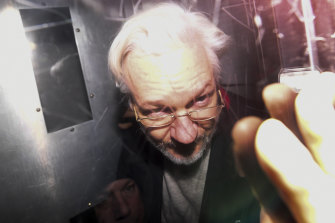 Julian Assange leaves in a prison van after appearing at Westminster Magistrates’ Court.Credit:AP

The 48-year-old was brought to court from Belmarsh Prison on the outskirts of London. He saluted the public gallery, which was packed with ardent supporters including the musician MIA, when he entered the courtroom. He later raised his right fist in defiance when he was taken to holding cells to meet with lawyer Gareth Peirce.

Peirce said officials at Belmarsh Prison were making it extremely difficult for her to meet with Assange.

"We have pushed Belmarsh in every way – it is a breach of a defendant's rights," she said.

Assange refrained from making political statements. He confirmed his name and date of birth, and at one point said he didn't understand all of the proceedings against him during the brief hearing at Westminster Magistrates' Court. 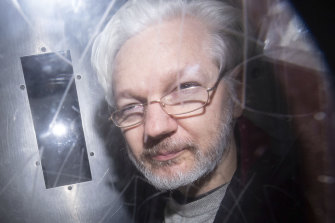 He faces 18 charges in the US, including conspiring to hack into a Pentagon computer. He has denied wrongdoing, claiming he was acting as a journalist entitled to First Amendment protection.

Many advocacy groups have supported Assange's claim that the charges would have a chilling effect on freedom of the press.

A five-day extradition hearing is scheduled for late February. Assange's legal team has tried to delay the hearing so there is more time to prepare, but these requests have been denied.

Assange has already served a 50-week prison sentence in Britain for jumping bail. A rape investigation launched against him in Sweden has been dropped, so he would likely be freed from prison if extradition is denied.