Women flocked to beauty salons yesterday after the Government finally allowed them to have professional facial treatments.

Their relief came after the Prime Minister announced that beauticians could once again offer ‘close contact’ services, such as eyebrow treatments and facials.

A planned reopening earlier this month was paused amid concerns over rising Covid cases but the easing of restrictions does not yet apply to areas still subject to localised lockdowns.

One satisfied customer last night was Kelsey Brown, 20, from Fulham, South-West London. She said: ‘Finally, after months of being told it wasn’t important for women to get their eyebrows treated, I was able to get them done. I’m elated.’ 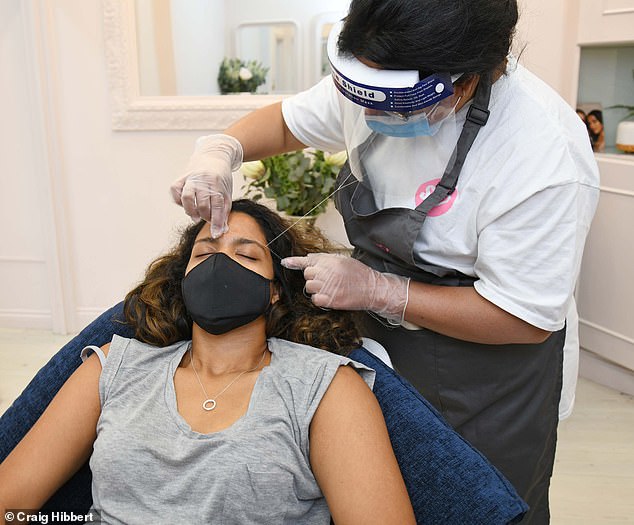 Women flocked to beauty salons yesterday after the Government finally allowed them to have professional facial treatments, after men were able to get brow trims from July 4 when barbers opened

Men have been able to have brow trims since July 4 when barbers opened alongside hairdressers. Critics have called this six-week discrepancy an example of ‘horrendous double standards’ and said it highlighted that the Cabinet was overwhelmingly made up of men.

Tory MP Caroline Nokes, chair of the Women’s and Equalities Committee, said yesterday: ‘This is a massive relief for the sector and all those brilliant entrepreneurial women working in it.

‘I know they have had to wait a long time to get the green light to open up close contact services, and how unfair they felt it was when they saw many barbers performing similar services on men.

‘They are looking forward to getting back to work, promoting well-being and helping clients with a range of skin issues, and I am relieved for so many.’

Haylee Benton, boss of Cecily Day Spa in Berkhamsted, Hertfordshire, said she was ‘super excited’ but fearful that her business will still remain affected due to the delay in reopening.

She said: ‘While it’s great to be open again, it’s going to take a while to get things fully back on track as people don’t know whether we are open or not for facial treatments because of the back and forth.’ 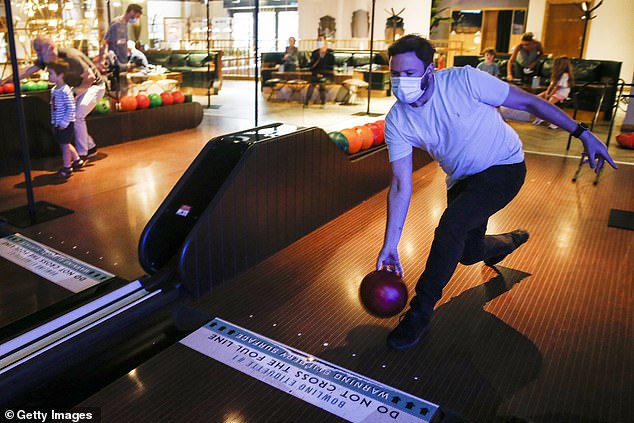 Gamblers are now dealt their cards face up so they don’t have to touch them, they are separated from croupiers and other players by plexiglass, and their chips are cleaned and disinfected after use.

One three-card poker player, who asked not to be named, said: ‘I am glad it’s reopened. I think it’s great, I feel safe and you aren’t sitting next to someone coughing and spluttering. It’s better for people.’

Hippodrome boss Simon Thomas said: ‘We’ve been looking forward to this for the last five months.’

He wasn’t the only one breathing a sigh of relief at the latest easing of lockdown as indoor theatres, music and performance venues were also allowed to reopen, albeit with socially distanced audiences.

Wedding receptions with sit-down meals for up to 30 guests are now also permitted. Children’s play centres and ice rinks can also reopen with social distancing measures in place.

A small number of sporting events will be used to test the safe return of spectators, starting with the two-day final of the World Snooker Championship in Sheffield. Players took to the table yesterday in front of 300 fans, and there will be a similar number for today’s climax.

If the pilots are a success, other venues could be opened to socially-distanced fans from October 1.