Toe-curling footage has emerged of Chinese President Xi Jinping humiliating Justin Trudeau with a dressing down on the sidelines of the G20 conference.

The two leaders were caught on camera having a heated discussion at the global summit in Bali today, with Xi tearing into the Canadian Prime Minister.

Xi appeared visibly frustrated as he confronted Trudeau about how details of an earlier meeting between them, which was held yesterday, had been leaked to the press by Canadian government sources.

To add to the tensions, a planned meeting between Rishi Sunak and Xi was called off today, hours after the new prime minister was urged not to ‘go soft’ on the Chinese premier.

Number 10 expected a ‘frank’ meeting with the ‘authoritarian leadership intent on reshaping the international order’ but there does not appear to be any thawing in relations between China and the West.

Canadian sources had reported that Trudeau raised ‘serious concerns’ with Xi over suspected domestic interference by China during their first talks together in more than three years.

But Xi, trying to mask his anger with a pointed smile, was filmed by Canadian journalists telling an increasingly awkward-looking Trudeau: ‘Everything that we discussed yesterday has been leaked to the papers and that’s not appropriate.’

A stunned Trudeau, almost at a loss for words, just nodded as Xi continued his rant through a translator. The Chinese President looked pointedly at Trudeau and added: ‘And that’s not the way the conversation was conducted.’

Trudeau, knowing that details of his meeting with Xi had been leaked by his Canadian government sources, did not address the Chinese President’s concerns and instead gave a hapless response. 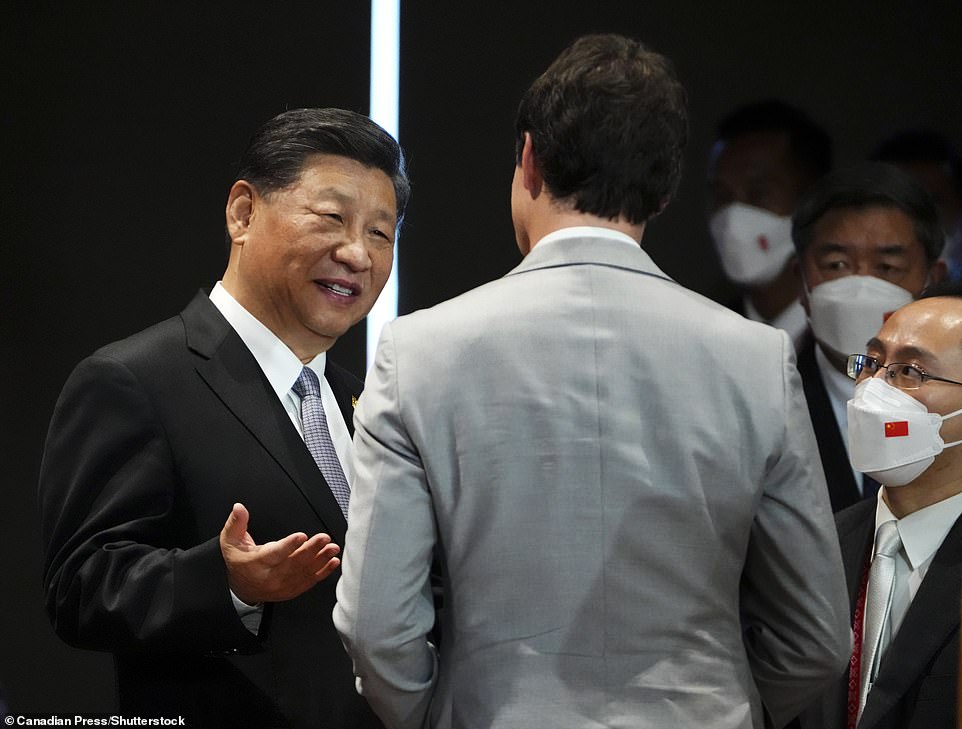 The two leaders were caught on camera having a heated discussion on the sidelines of the global summit in Bali today, with Xi tearing into the Canadian Prime Minister (pictured during the conversation today) 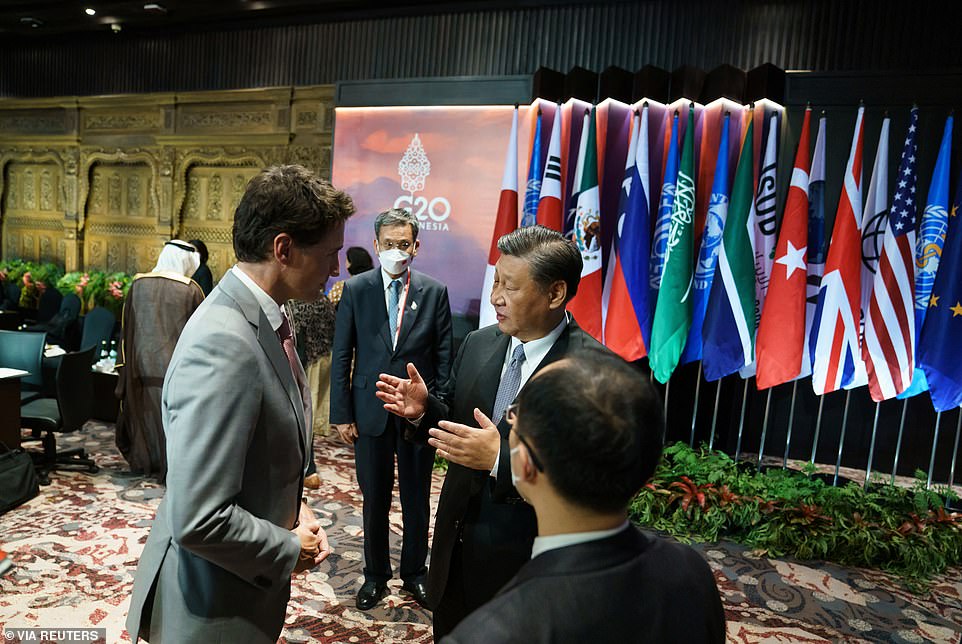 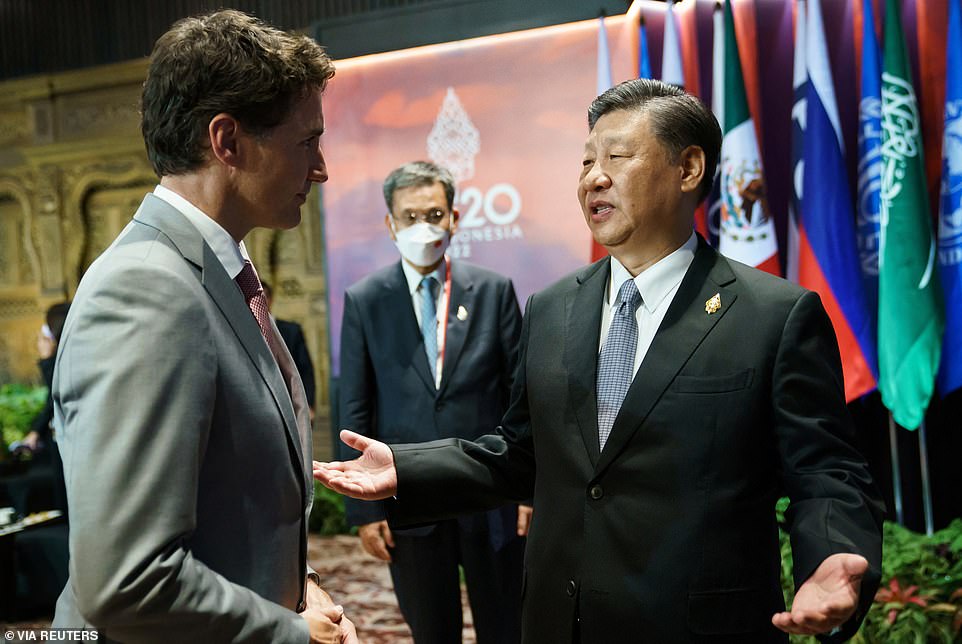 Xi appeared visibly frustrated as he confronted Trudeau about how details of their meeting, which was held yesterday, had been leaked to the press by Canadian government sources 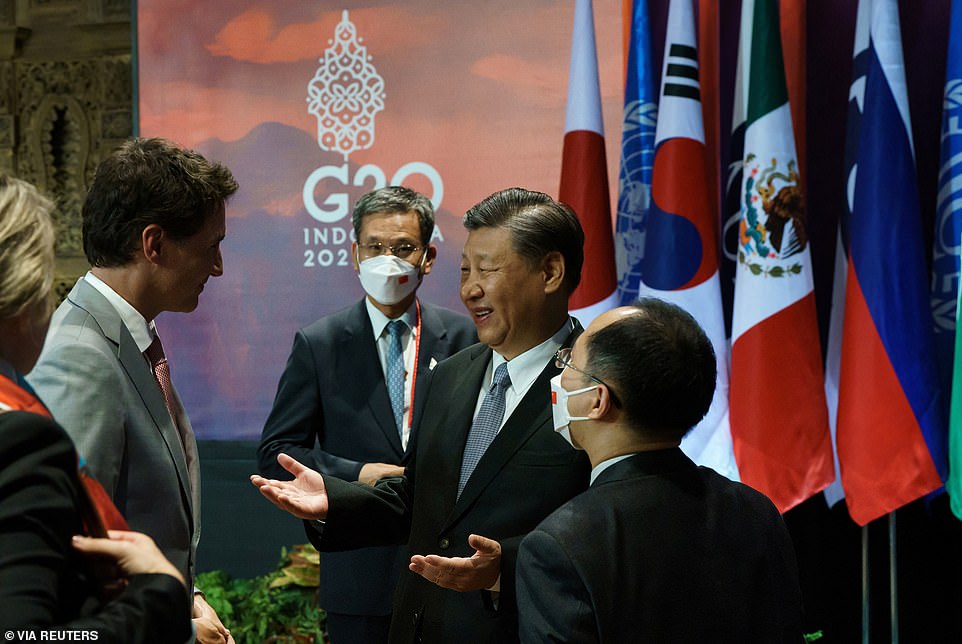 Xi, trying to mask his anger with a pointed smile, was filmed by Canadian journalists telling a seemingly embarrassed Trudeau: ‘Everything that we discussed yesterday has been leaked to the papers and that’s not appropriate.’

‘Well in Canada, we believe in free and open and frank dialogue, which we will continue to have,’ he eventually managed to say.

‘We will continue to look to work constructively together but there will be things that we will disagree on.’

Xi then smiled broadly and reached out and shook Trudeau’s hand to end the excruciating exchange.

Seemingly stunned by the onslaught, Trudeau wandered off alone  while Xi smiled at the camera.

It comes after a Canadian government source said Trudeau raised ‘serious concerns’ over suspected domestic interference by China in his first talks with Xi on Tuesday in more than three years.

Ottawa has in recent weeks accused the Chinese government of interfering with its democratic institutions and judicial system, after years of strained relations between the two countries. 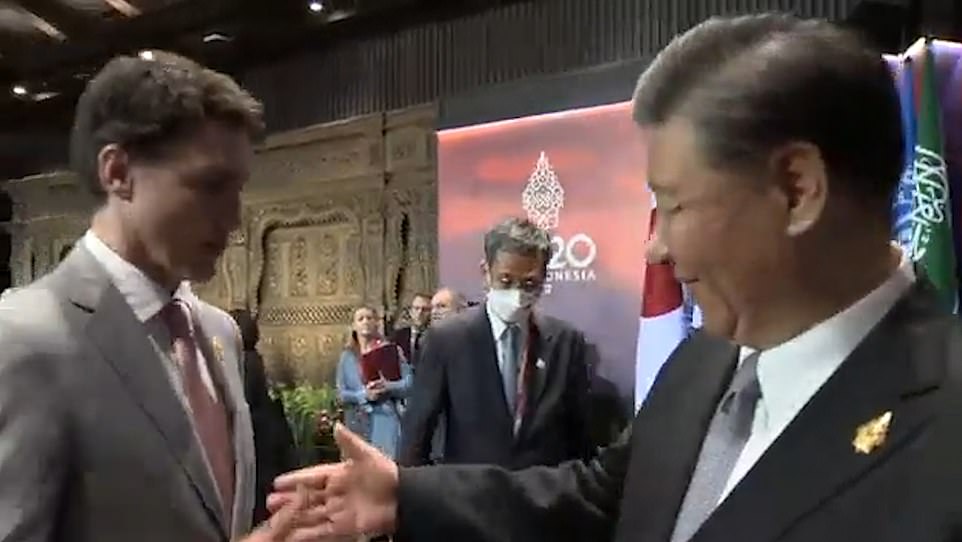 While Trudeau is speaking, Xi looks frustrated as he refrains from making eye contact with the Canadian Prime Minister. Xi then smiles broadly and reaches out and shakes Trudeau’s hand in a tense and awkward exchange 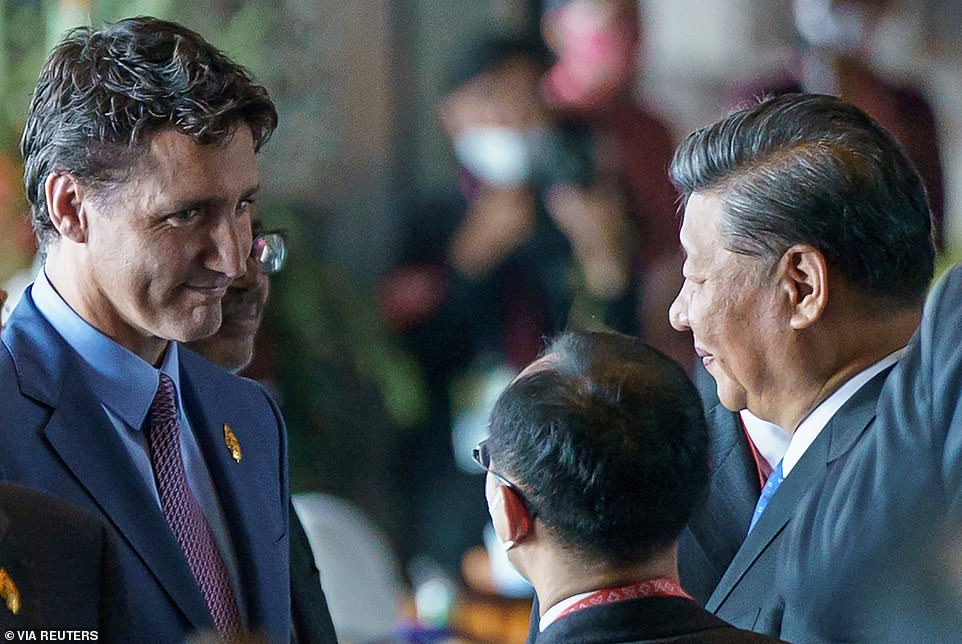 Today, Trudeau said he had discussed the issue of Chinese interference in Canadian affairs again today on the sidelines of the summit. This conversation was the one filmed by Canadian journalists.

‘I have raised the issue of interference with our citizens,’ Trudeau told a news conference on the Indonesian resort island on Wednesday.

Trudeau met Xi on Tuesday, the first face-to-face dialogue between the two leaders since 2019.

He said he told the Chinese leader, who last month secured an historic third term, ‘it is important to be able to have a dialogue about this’.

Canadian federal police said on Thursday they were investigating so-called police stations set up illegally by China in the North American country.

‘It’s extremely important we continue to stand up for the things that are important for Canadians,’ Trudeau told reporters.

He said he also highlighted ‘areas of mutual concern and geopolitical challenges’ in his talk with Xi, including the war in Ukraine and tensions on the Korean peninsula. 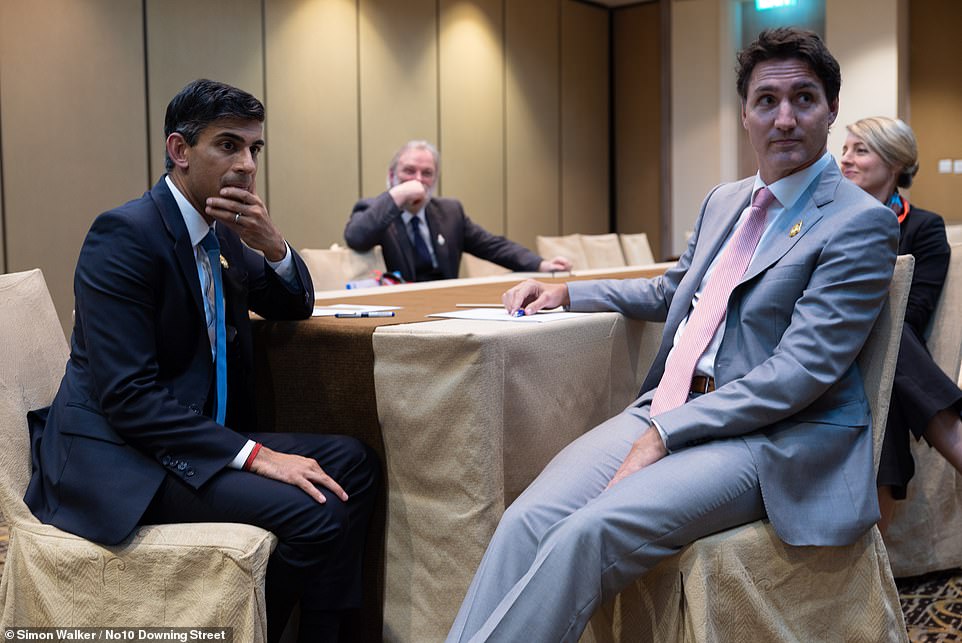 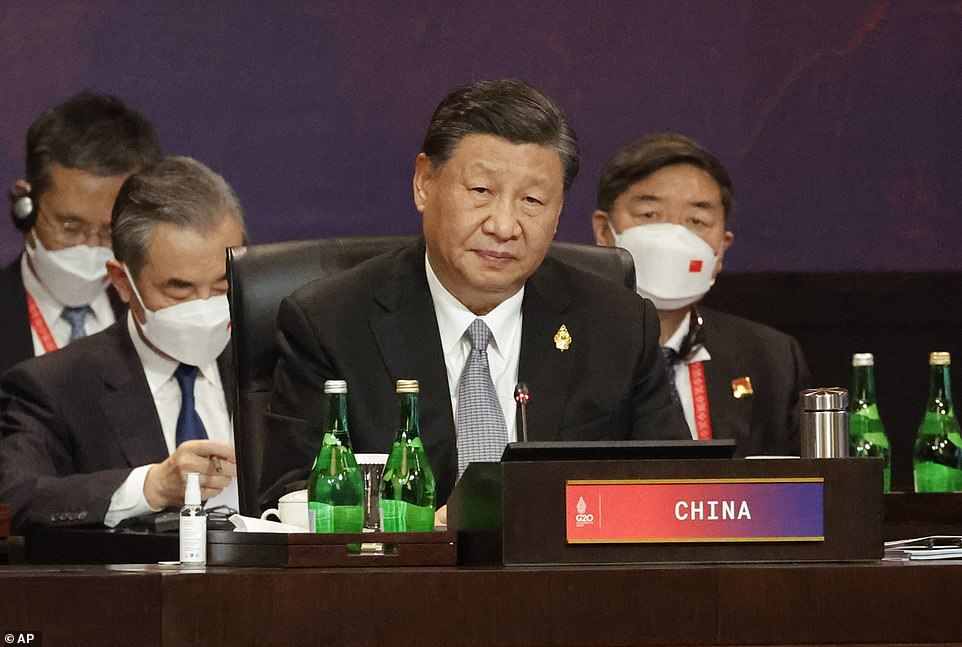 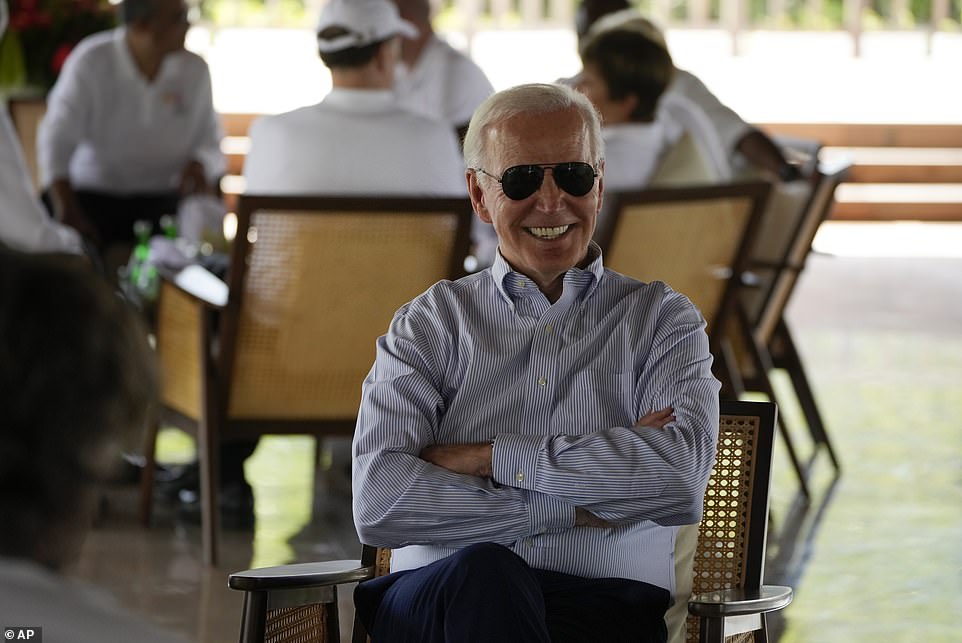 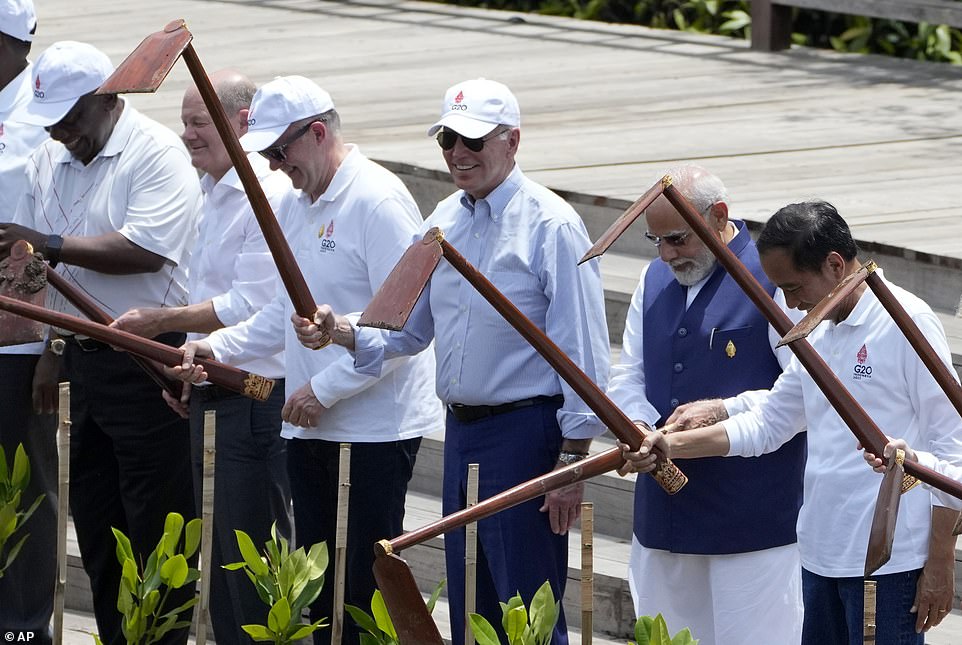 Global leaders, including Joe Biden and Narendra Modi, brandish hoes as they take part in a mangrove planting event in Bali today 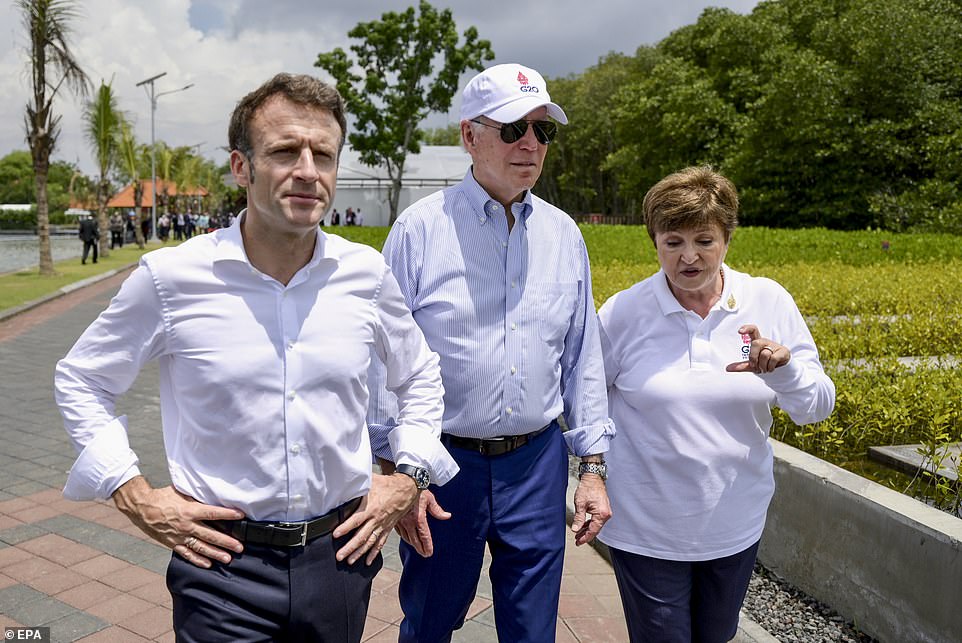 China’s foreign ministry declined on Wednesday to confirm any details of the conversation between the two leaders. Ministry spokeswoman Mao Ning said she had no information when asked about the meeting.

Diplomatic tensions between Canada and China have been running high since the detention of Huawei Technologies executive Meng Wanzhou in 2018 and Beijing’s subsequent arrest of two Canadians on spying charges.

While the standoff ended when all three people were released last year, relations have remained sour. Citing national security concerns, Ottawa banned the use of 5G gear from Huawei in May and earlier this month ordered three Chinese companies to divest from critical minerals in Canada.

The Canadian government is poised to launch a so-called Indo-Pacific Strategy that Foreign Minister Melanie Joly says will challenge China on human rights, while seeking cooperation with the world’s second-biggest economy on climate change and other shared goals.

Meanwhile, a planned G20 meeting between British Prime Minister Rishi Sunak and Xi has been cancelled due to ‘scheduling issues’, a Downing Street spokesperson said today.

The schedule at the summit on the Indonesian island of Bali has been disrupted by an emergency meeting called after a missile killed two people in Poland. 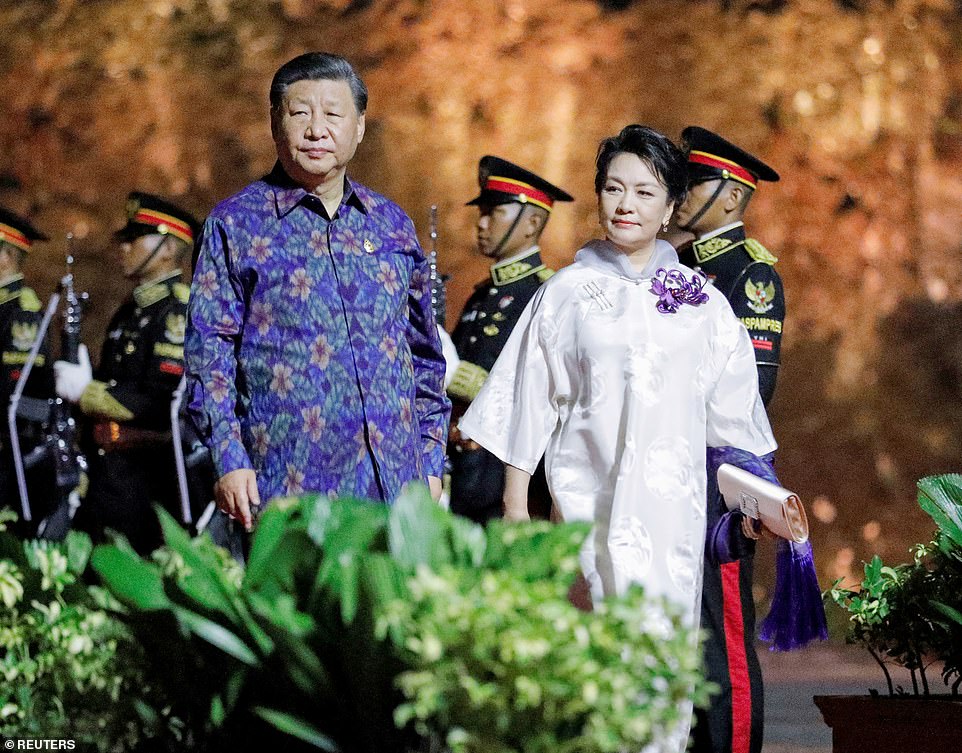 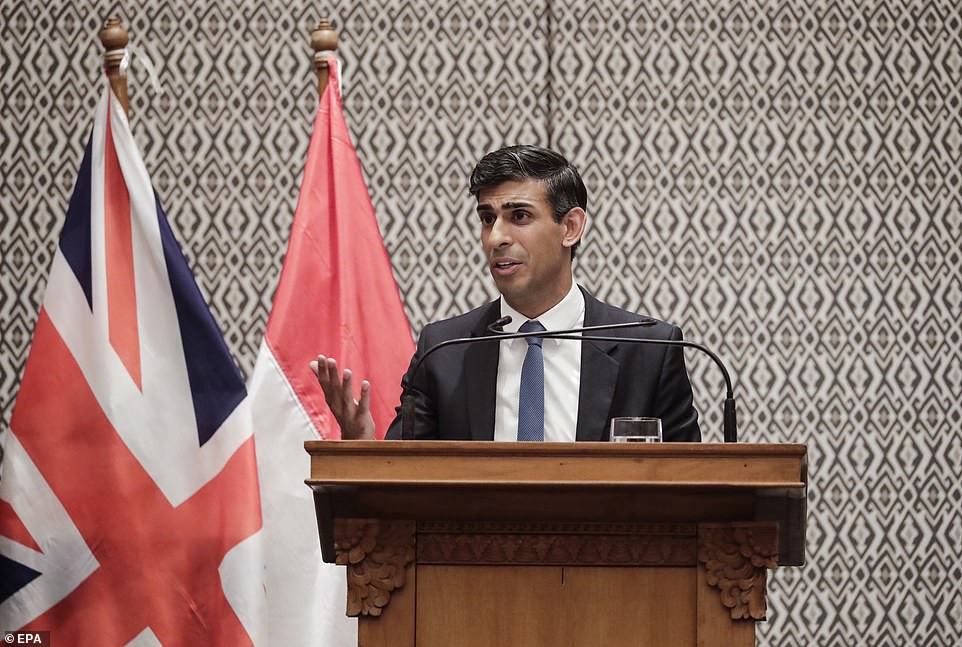 Meanwhile, a planned G20 meeting between British Prime Minister Rishi Sunak and Xi has been cancelled due to ‘scheduling issues’, a Downing Street spokesperson said today

Sunak and Xi had been due to hold the first meeting between British and Chinese leaders for almost five years, with Sunak’s office saying beforehand that the prime minister would seek to establish a ‘frank and constructive relationship’.

Relations between London and Beijing have deteriorated in the last decade as Britain expressed alarm that an open door to Chinese investment could pose national security risks. London had also criticised Beijing’s trade practices and human rights record in Hong Kong and Xinjiang.

In a statement released before the planned meeting, Downing Street said the challenges posed by China were ‘systemic’ and ‘long-term’.

‘China is a country with fundamentally different values to ours, with an authoritarian leadership intent on reshaping the international order,’ it said.

However Sunak was expected to take a more nuanced approach to Beijing than his predecessor Liz Truss, who had said that China must play by the rules.

‘None of the issues the Prime Minister is discussing at the G20 – the global economy, the impacts of the war in Ukraine on food and energy security, climate change and global health – can be addressed without coordinated action by all the world’s major economies. That includes China,’ his office had said.

Chinese foreign ministry spokesperson Mao Ning said she had no information to offer on the cancellation of the meeting between Xi and Sunak.