Royal Ascot is one of the highlights of the summer for the Queen the British royal family from over the years.

MORE: 21 beautiful Ascot-appropriate dresses for a day at the races

They include Prince Harry and Meghan‘s stunning debut in 2018 and Princess Diana‘s visit to the race ground just weeks before her wedding to Prince Charles in 1981.

But let’s start with the hilarious moment the Countess of Wessex nearly fell on top of the Duchess of Cambridge as she boarded the carriage. The ladies managed to laugh it off in style, of course!

The Countess of Wessex and the Duchess of Cambridge, 2017

Sophie and Kate‘s visit to Ascot started off with a stumble, when Prince Edward’s wife lost her balance and nearly fell into Kate’s arms as she boarded their carriage. The royals looked shocked before breaking into fits of laughter. Prince William, meanwhile, could be seen chuckling in the background. Here, the royals are pictured laughing off the mishap and looking more composed after the small incident.

GALLERY: 8 times the royals enjoyed a cuddle in the rain

The Duke and Duchess of Cambridge found themselves under an umbrella as wet weather reigned supreme at Ascot last year. Ever the doting husband, Prince William held the umbrella to shield himself and his wife from the terrible weather. 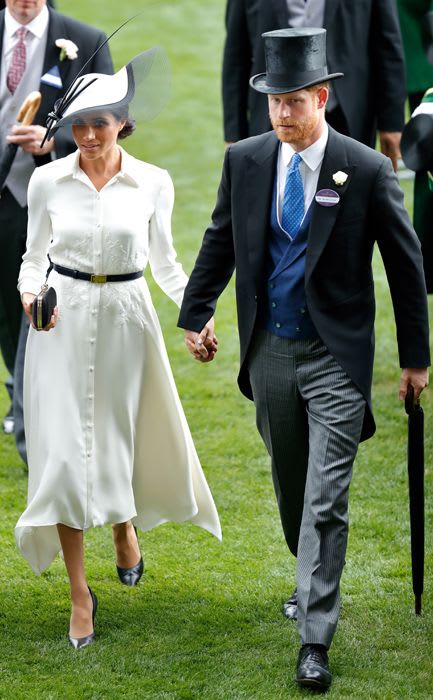 Just a month after their royal wedding, the Sussexes made their joint debut at Royal Ascot. For Meghan’s first appearance at the family event, she ticked all the boxes of the strict dress code wearing a white Givenchy shirt dress. The newlywed completed her ultra-regal look with a hat by Philip Treacy and swept her hair into an elegant low bun.

MORE: 12 of the most gorgeous Ascot dresses and hats worn by the royal family 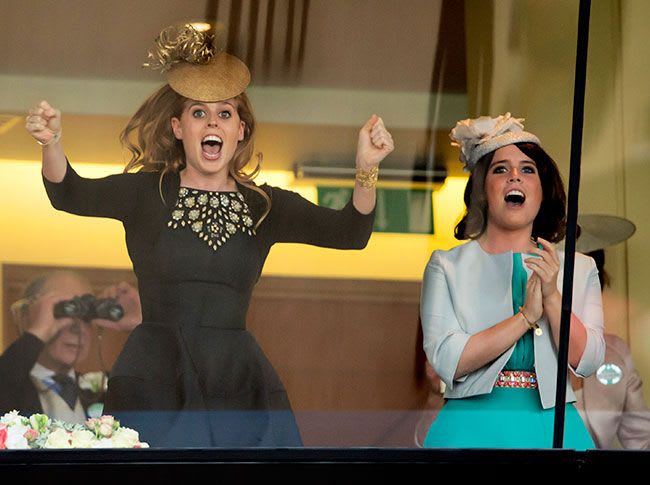 Both Princess Beatrice and Princess Eugenie got into the spirit of things when they were seen cheering on the Queen’s horse Estimate to victory in the Gold Cup on Ladies Day.

The Duchess of Cambridge and Carole Middleton, 2017 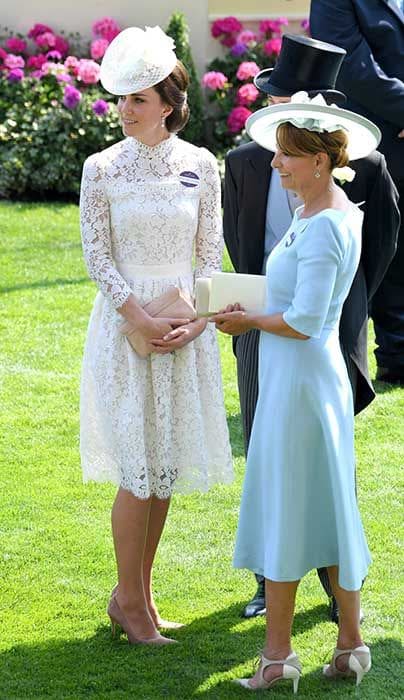 The Duchess of Cambridge was joined by her mother, Carole Middleton, at the 2017 races. The mother and daughter duo looked lovely for the opening day, with Kate dressed in a white lace Alexander McQueen dress, while Party Pieces founder Carole donned a pale blue ensemble from Goat.

The Queen with the Queen Mother, 1959 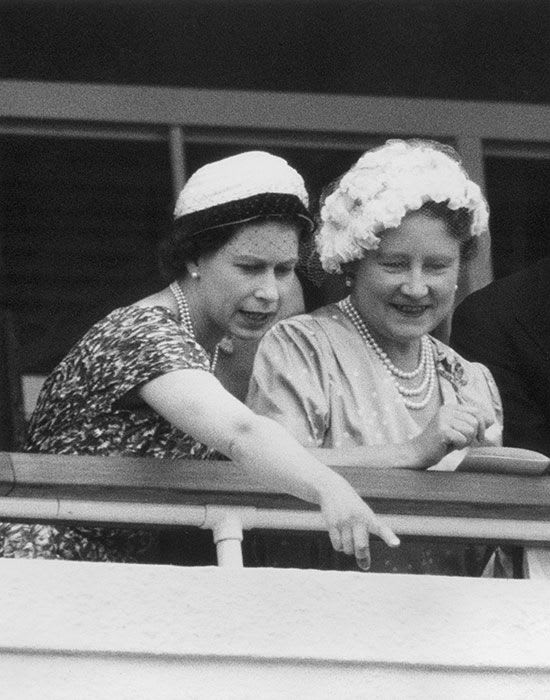 An avid fan of horses and horse racing, the Queen can been seen with her mother at the famous races on Ladies Day in 1959. Royal Ascot was founded by Queen Anne in 1711. The Queen is a dedicated supporter of the annual event and is constantly kept informed of the order and the development of the racing programme throughout the year. She has owned 22 winning horses including Estimate, 2013’s winner of the historic Gold Cup. Attended by thousands of race-goers, each day of the five-day meeting commences with a Royal Procession, and the arrival of the Queen and the royal party in horse-drawn landau carriages is televised each year. 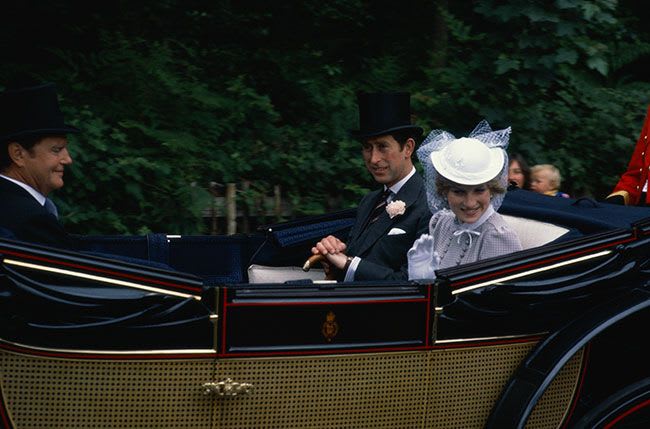 This was the late Princess Diana’s first appearance at Ascot with the royal family – just days before her wedding to Prince Charles. Diana, then 18 years old, was seen happily waving at royal fans as she sat next to her future husband in a horse-drawn carriage. It was one of the first sightings of the late princess before she took on her royal duties.

Princess Diana with the Queen Mother, 1986 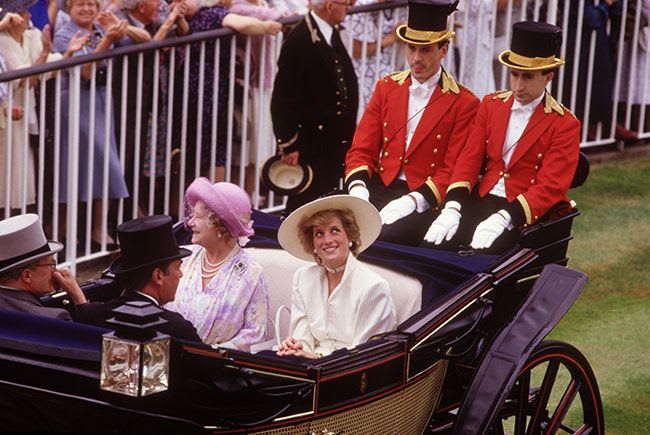 Princess Diana charmed the crowds as she sat alongside the Queen Mother during the procession. Leaving both Princes William and Harry at home, the late royal appeared to be in great spirits as she happily waved at onlookers.

Known for being good friends, it hardly surprising that Princess Diana and Sarah Ferguson coordinated some of their outfits. The pair both sported pillar-box red outfits for their appearance with their husbands in 1990.

The Queen presents Prince Harry with a gift following a polo match, 2003 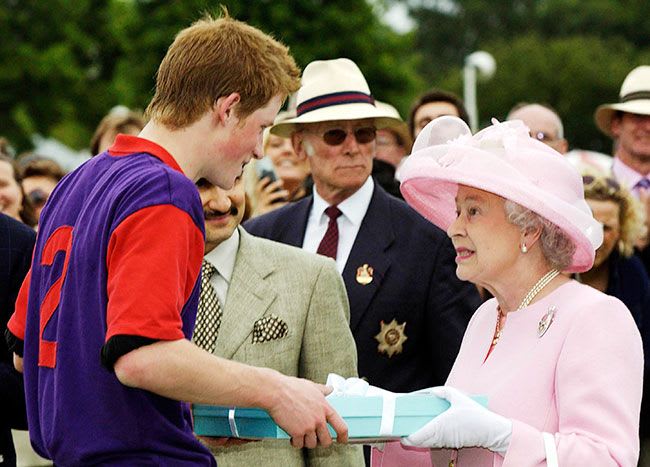 The Queen and Prince Harry shared a sweet moment when the monarch handed her grandson with a gift following a polo match during Royal Ascot. 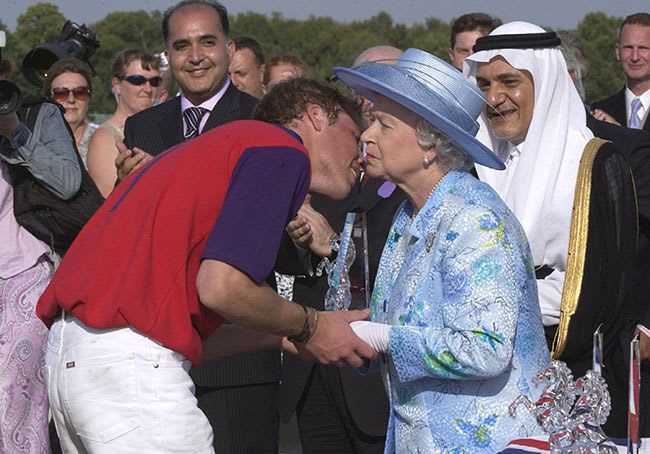 A year later, Prince William gave his grandmother, the Queen, a kiss on the cheek at the polo match on the second day of the Royal Ascot. 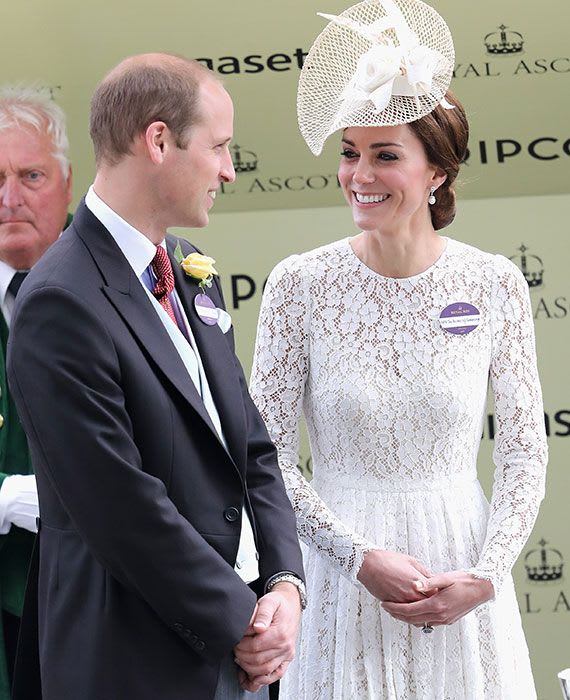 The Duchess of Cambridge looked sensational as she made her Royal Ascot debut in a stunning white lace dress from Dolce & Gabbana. She was joined by husband Prince William at the famous racing event. 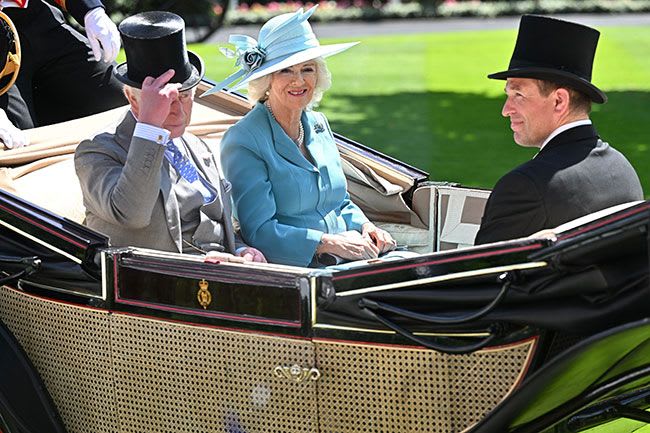 Prince Charles and the Duchess of Cornwall led the procession riding in the first carriage with the Queen’s eldest grandchild Peter Phillips. Despite delighting fans with their presence, royal fans were quick to spot the vacant seat opposite Prince Charles. The reason was simple: the seat was intentionally left empty in honour of the Queen’s absence.

Make sure you never miss a ROYAL story! Sign up to our newsletter to get all of our celebrity and royal news delivered directly to your inbox.