Adam Levine sold a massive estate in the tony seaside Pacific Palisades neighborhood of Los Angeles for an impressive $51 million this month.

Now DailyMail.com is sharing a look inside the incredible home that includes a stunning 10 bedrooms and 14 bathrooms.

And it has a pedigree: Ben Affleck and Jennifer Garner once called the compound home as did Brian Grazer and his wife at the time Gigi Levangie, and legendary, late iconic actor Gregory Peck and his French wife Veronique Passani. 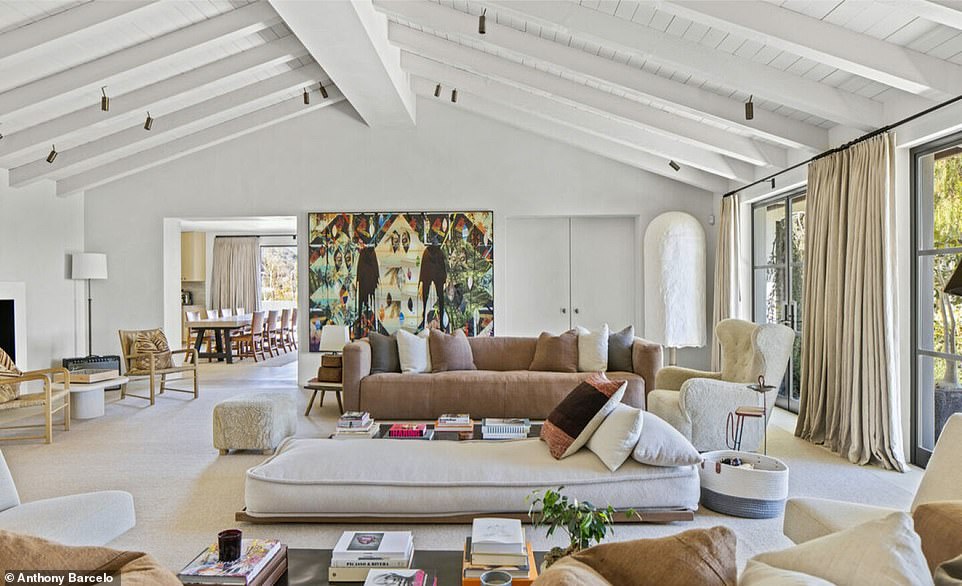 Inside the magic: Adam Levine sold a massive estate in the tony Pacific Palisades neighborhood of Los Angeles for an impressive $51 million this month. Now DailyMail.com is sharing a look inside the incredible home that includes a stunning 10 bedrooms and 14 bathrooms 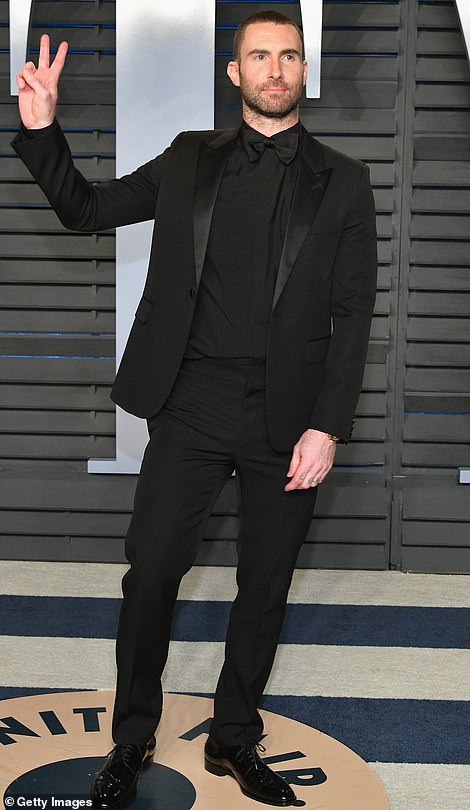 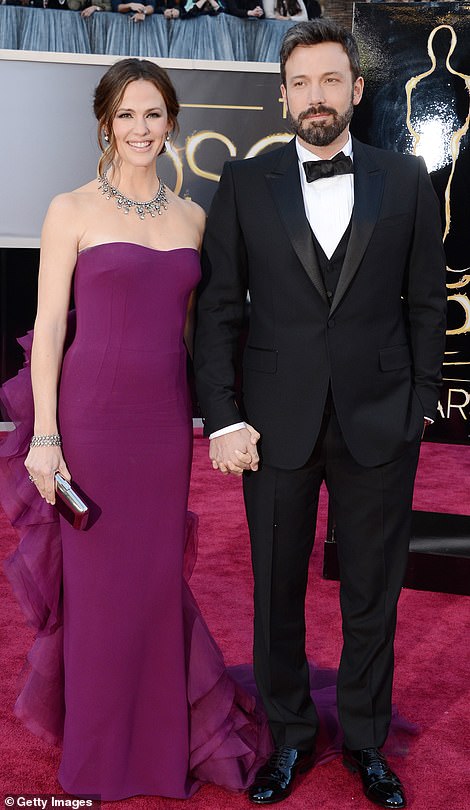 It has gone through several renovations over the decades after it was built in the 1930s during the Golden Age of Hollywood.

The home was designed by the renowned California architect Cliff May and dates back to the 1930s.

The compound features a stunning 10 bedrooms and 14 bathrooms, and it has undergone renovations by its most recent owners.

The property has abundant space on its three acres, and its heavy tree growth keeps the area private. 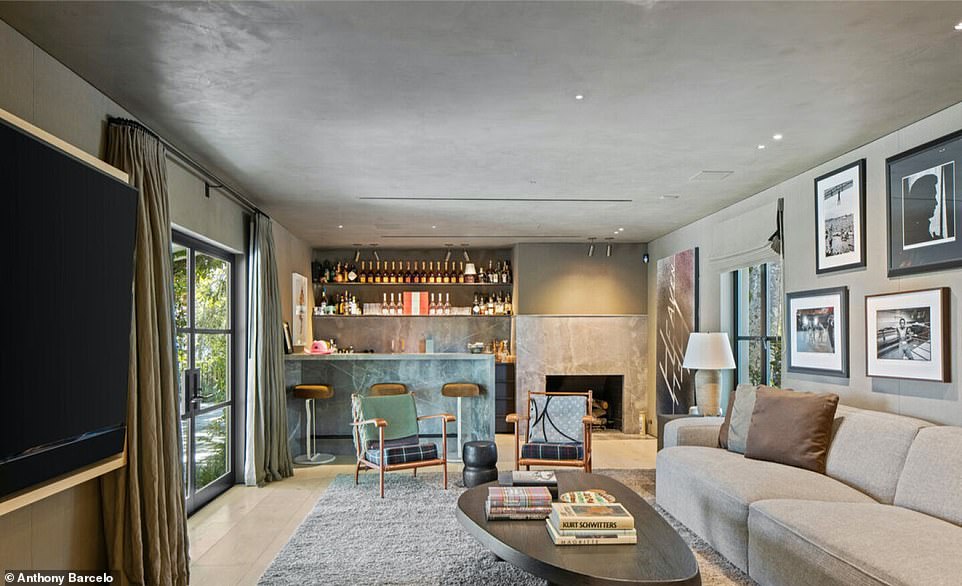 The media room comes with a lot: There is a bar that has several shelves and space for three stools. There is also a working fireplace and plenty of room for a sofa, coffee table and chairs 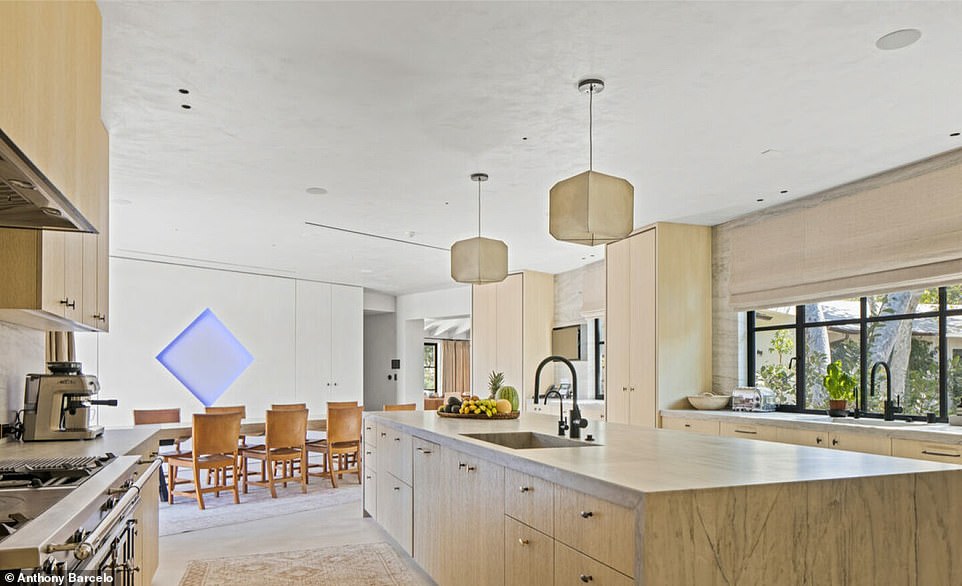 An open air feel: The kitchen has a huge wood and marble island with built-in sink that looks out to the dining room; there are also pendant lights in a modern boxy shape

The main home on the compound is a 9,000-square-foot ranch-style mansion, but there’s also a guesthouse with four additional bedrooms on the property.

A separate building takes care of some of the couples miscellaneous needs with a gym and yoga studio, as well as an office for their business affairs.

Although the home still retains much of the original 1930s style, there are also more opulent, modern touches, including a Dolby screening room and a game room. 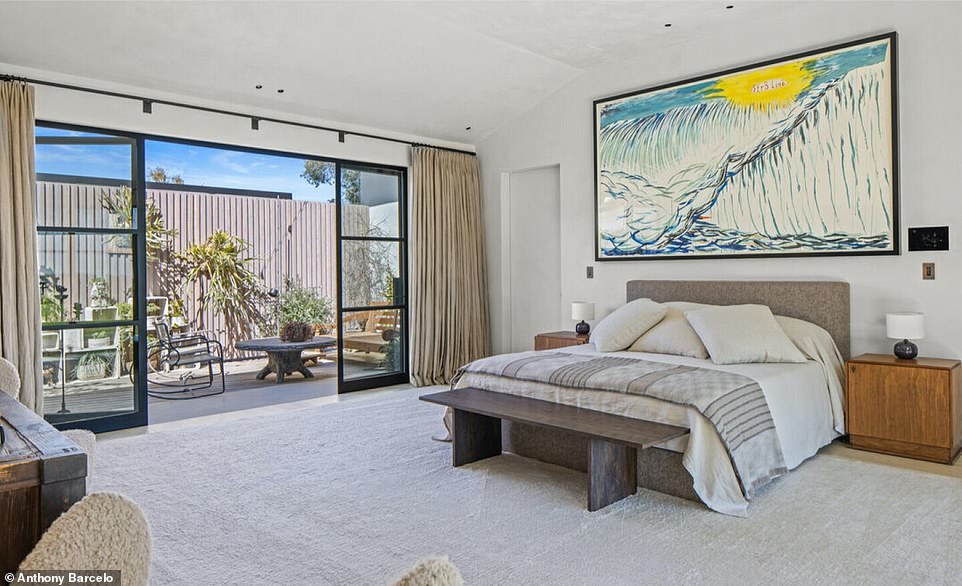 A cozy play to get some shut eye: There are a total of 10 bedrooms in the home. This one has a large glass door that opens up to a private patio

There is also a large walk-in refrigerator — and fresh eggs from the chicken coop on the property — and a marble bar is ideal for entertaining guests.

Outside, the elegantly landscaped property includes a swimming pool and hot tub, and several lounge areas with a fire pit, along with a basketball court.

The compound’s elevation will give the new owners ideal viewers all the way to Downtown Los Angeles in the east and the Pacific Ocean to the west. 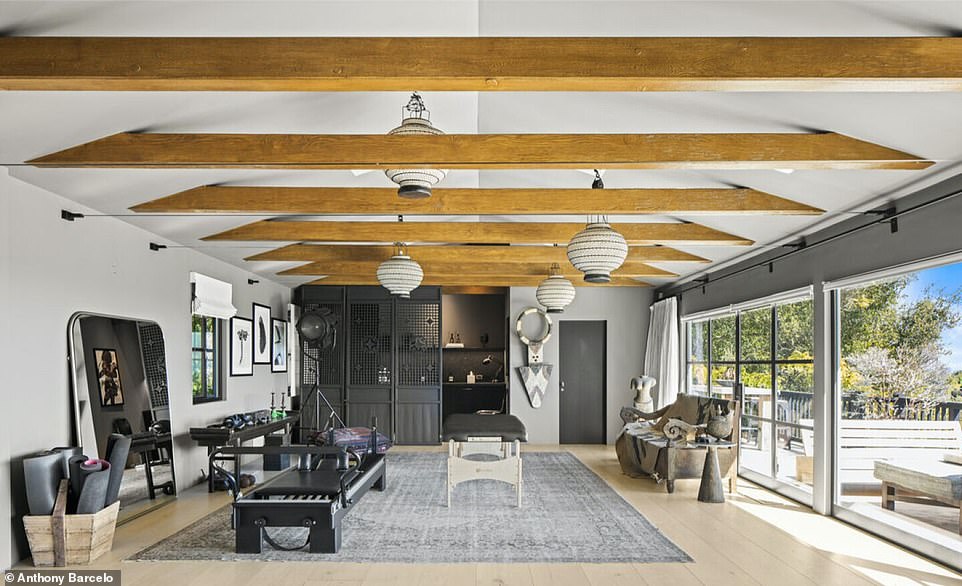 A nice place to work out: There is an exercise room that has wood beams in the ceilings and opens up to a balcony 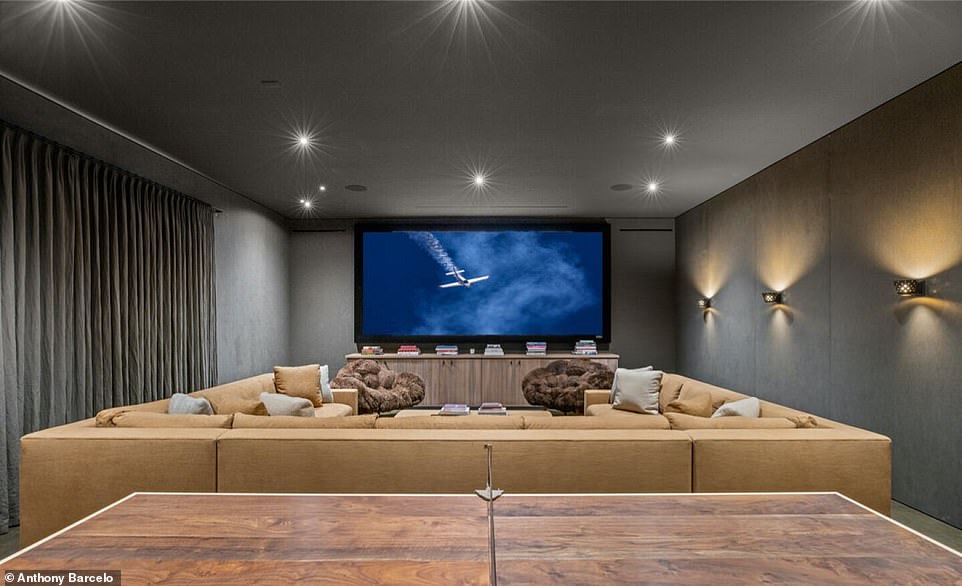 Come watch a movie: The home theater has enough room for a U shaped sofa and a ping pong table

Levine and his wife, supermodel Behati Prinsloo – who share daughters Dusty, five, and Gio, four – made a nice amount of money on the home.

Levine and Prinsloo purchased the enormous spread from Affleck and his ex-wife Garner in 2018 for $31.95 million, meaning they sold it at a nearly $20 million profit.

The sale became the third-priciest in Southern California so far this year, according to the Los Angeles Times.

Levine and Prinsloo originally listed their home for $57 million, but they will still be making a significant profit. 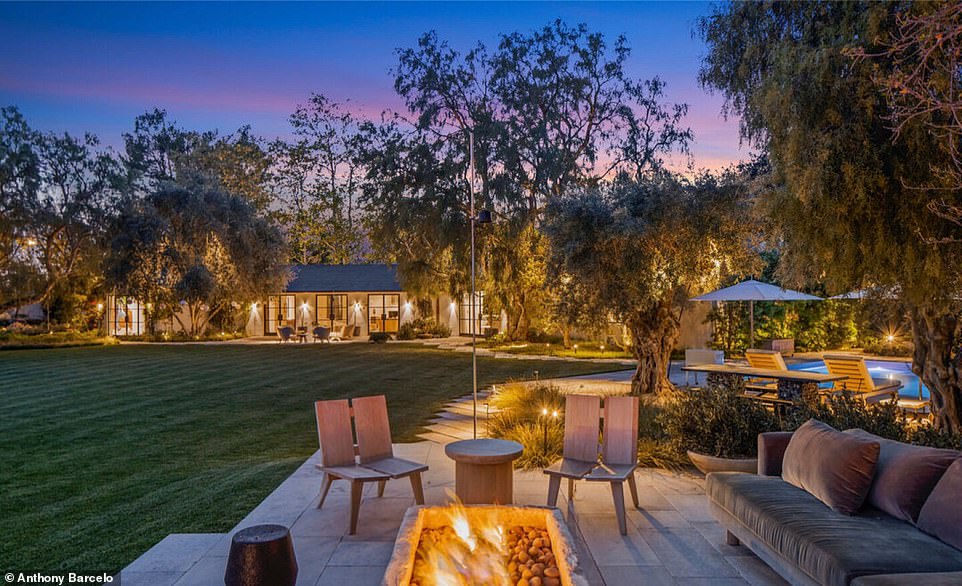 So much space for a summer party: The back yard has lush grass, and several lounge areas with a stone fire pit 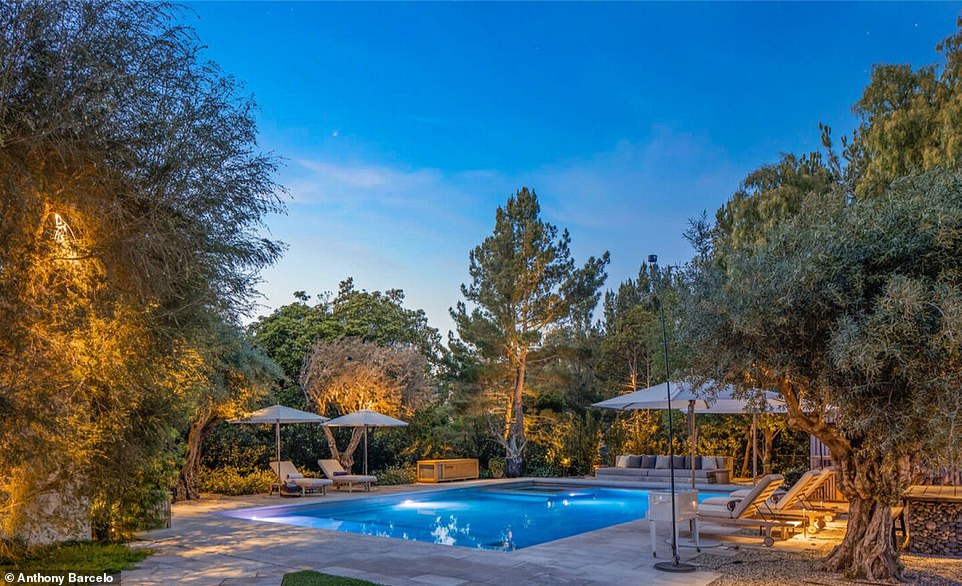 A pool for a dozen people or so: The rectangular swimming pool has a hot tub on the side with hushed underwater lights

Westside Estate Agency’s Kurt Rappaport was in charge of the listing, and Ariana Grande’s husband Dalton Gomez represented the buyer for Compass real estate, though their identity has not been revealed.

The singer and model originally bought the home from Affleck and Garner in the same year that they finalized their divorce, after announcing their separation in 2015. 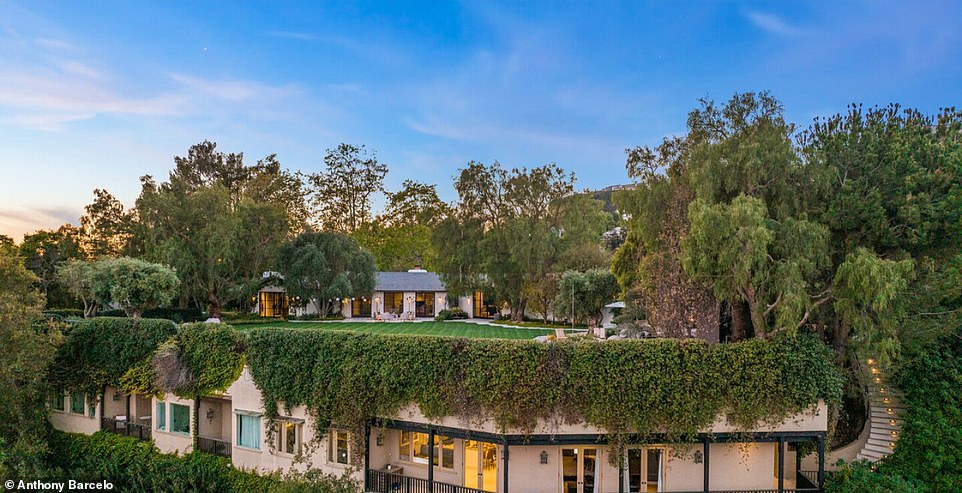 This house certainly has layers: Below the lawn are several more rooms that can be accessed by a backlit staircase 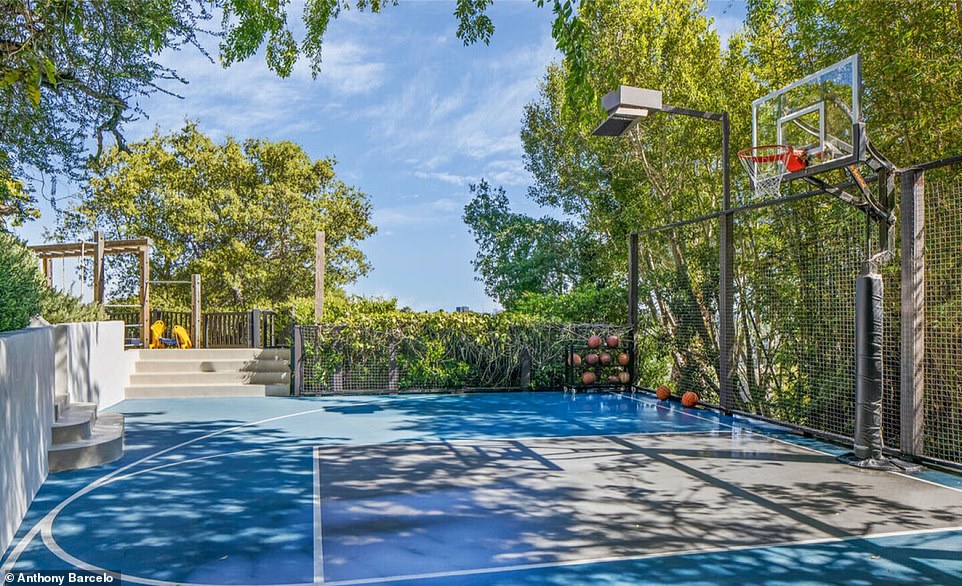 Time to play ball folks: There is also a basketball court that has a large light overhead for evening games

‘Adam usually takes the driver’s seat in making design decisions,’ Prinsloo told Architectural Digest in 2021 while giving a tour of their home.

‘He stays up all night looking at furniture and houses. He should be an interior designer himself.’

News of the impressive sale comes just a day after Levine brought down the house with a Maroon 5 performance in Tel Aviv, Israel.

The hitmakers most recently released their seventh studio album Jordi in June 2021.

The album’s title is the nickname of the band’s late manager Jordan Feldstein — the brother of Jonah Hill and Beanie Feldstein — who died in 2017.

A bird’s eye view of the compound: The main home on the compound is a 9,000-square-foot ranch-style mansion, but there’s also a guesthouse with four additional bedrooms on the property