SPOILER: ‘You do credit to bereaved spouses!’ After Life’s third and final season leaves fans ‘sobbing’ as they praise Ricky Gervais for ‘heartbreaking and tear-jerking’ conclusion

After Life’s third and final season was finally released on Netflix on Friday, and the tear-jerking conclusion to Ricky Gervais’ series left die-hard fans ‘sobbing’ on their sofas.

In a flurry of tweets, viewers praised the show for the ‘heartbreaking’ ending to Tony’s story, with many lauding his accurate portrayal of grief for those who have lost a spouse or loved-one.

After Life depicts the devastating story of local journalist Tony, who is struggling to move on with his life following the death of his wife Lisa to cancer, and after contemplating suicide decides to spend his life punishing the world for his loss. 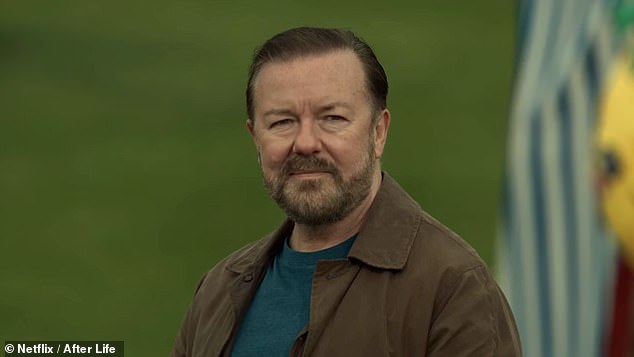 Emotional: After Life’s third and final season was finally released on Netflix on Friday, and the tear-jerking conclusion to Ricky Gervais’ series left die-hard fans ‘sobbing’ on their sofas

While much of After Life’s dark humour stems from Tony’s general hate and dislike of the world, aside from his dog Brandy, he is infuriated when everyone tries to pity him and make him a better person.

Despite attempting to find love again following his wife Lisa’s death, with care home nurse Emma (Ashley Jenson), he decides he isn’t ready to move on, and encourages her to go on a date with a school friend.

While Tony continues to travel around town with his co-worker Lenny (Tony Way) hearing an array of bizarre local stories, it’s clear he’s become far more hopeful and considerate of those around him.

In the final episode, Tony reflects on his relationship with Lisa (Kerry Godliman) at her grave, alongside her brother Matt (Tom Basden), and widow Anne (Penelope Wilton), admitting he regrets poking fun at his wife’s belief in the afterlife. 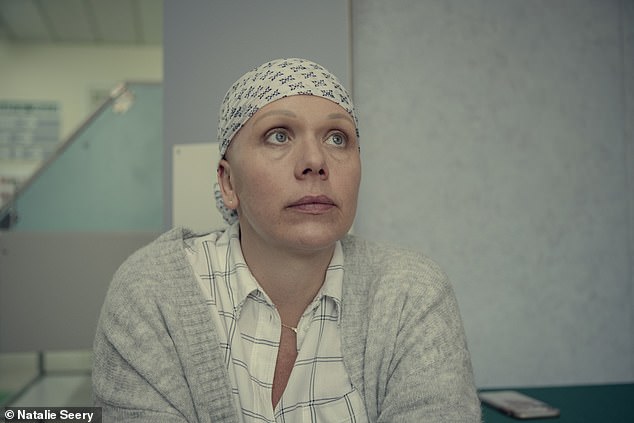 Moving: In a flurry of tweets, viewers praised the show for the ‘heartbreaking’ ending to Tony’s story, with many lauding his accurate portrayal of grief (Tony’s wife Lisa is pictured)

Following a visit to a cancer hospice, Tony is given the chance to right this wrong, when a young boy asks if he believes in the afterlife, and he lies and does his best to comfort the child.

As viewers see a flashback of Lisa reading the Bereavement poem, Tony finally decides to head to the bank and cash in on her £150,000 life insurance, after months of refusing to do so.

Tony then proceeds  to hand out huge sums of the money to loved ones in cheques, explaining he’s finally realised his ‘superpower’ is being kind to others and ‘making others feel good.’

The episode concludes with a visit to the Tambury Fair, where Tony exchanges pleasantries with Emma and her new boyfriend, before encouraging Kath to adopt a dog after realising how much he’d been saved by his pet Brandy. 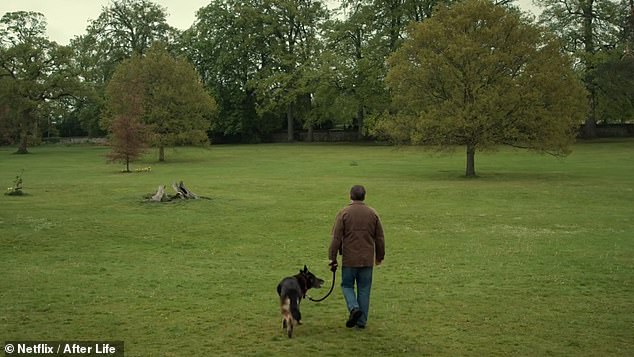 Heartbreaking: In the final episode, Tony reflects on the happier times he had with Lisa before her passing, and walking away, before slowly fading away

He then reflects on the happier times he had with Lisa before her passing, and walking away down the common with Brandy, and his wife Lisa, before they all slowly fade away.

Many die-hard fans were quick to laud the moving end to the acclaimed comedy-drama, with most openly admitting it left them in floods of tears.

One wrote: ‘Just finished season 3 of @rickygervais After Life on Netflix. What an absolute masterpiece.

‘I can’t think of another series that brought me to tears but also made me laugh so much. Whatever you’re going thrugh in life, there is always someone worse off.’ 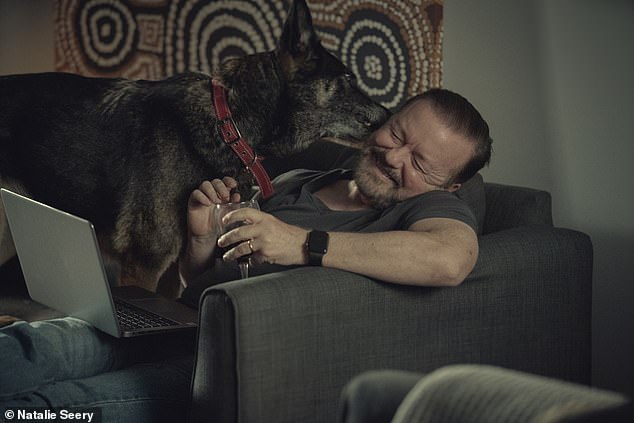 Another tweeted: ‘Well now I’ve watched After Life sewason 3 let me be among the millions to thank @rickygervais for such a beautiful series. I laughed, I cried and I grew. All time fave. #BeKindAndSwear.’

Several other fans praised: ‘Just finished After Life and it’s as brilliant, tear-jerking and beautiful as the last two seasons. I’ve never known a show that articulates ain, grief and continuation of life so well. Thank you @rickygervais for your wonderful mind.’

‘Just binged After Life series 3, wow absolutely fantastic from start to finish, @rickygervais thank you for this show, mixed emotions throughout. Sad to see it end but can’t wait for future projects.’

‘Just laughed out loud and ugly cried my heart out! Brilliantly written and played… just brilliant!!!’ 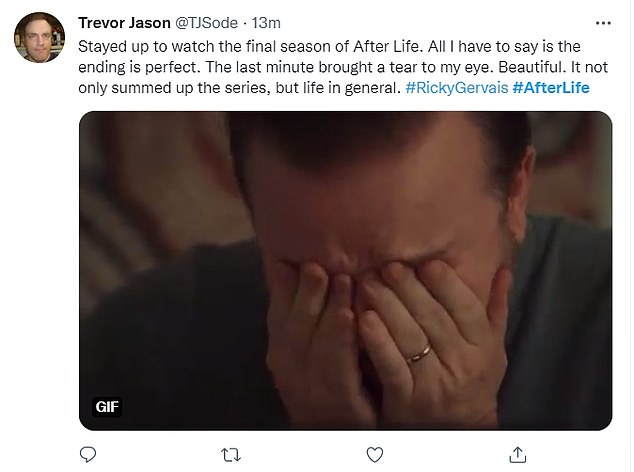 One also posted: ‘Just finished watching #After Life and what an amazing show it was. Don’t remember the last time when I cried and laughed this much. Great work @rickygervais.’

A viewer also posted: ‘#AfterLife 3 done. It really gets you in the feels. How does @rickygervais do it?’

One added: ‘Thank you @rickygervais for #AfterLife, the beautiful journey finally comes to an end, as expected the last season also did make us laugh and cry at the same time, the cinematography and the soundtracks used just phenomenal, loved it all.’

In a flurry of posts, viewers also shared: ‘Oh @rickygervais what a thoughtful, empathetic, kind, ball of atoms and cosmic dust you are to create such a beautiful series. I’ll miss Tony and Lisa. Worth all the ugly and I mean ugly crying. And of course the belly laughs. Thank you #AfterLife.’

‘Stayed up to watch the final season of After Life. All I have to say is the ending is perfect. The last minute brought a tear to my eye. Beautiful. It not only summed up the series, but life in general.’

‘Nobody does grief as well as @rickygervais #AfterLife. The last episode especially is brilliant how it wraps everyting up and proves that Tony is an angel on earth. The last scene will have you sobbing.’

‘@rickygervais You do credit to bereaved spouses! Incredible writing, sensitive, insightful, heartbreaking but full of hope.’

While After Life’s final scene appeared to leave things on an ambiguous note, Ricky clarified that the closing moments weren’t a metaphor of Tony going to the After Life, but rather a sign that’s finally ready to move on.

‘I’m a blubbering mess!’ Following the show’s final moments, viewers flooded social media with praise for Ricky, with most confessing it left them in tears

He told Digital Spy: ‘It’s just that life goes on, you know? When we’re all dead and buried, that field’s still there, the Tambury Fair is still going, that tree is still there, and it’s basically said that we all die, but not today.’

‘That’s what the ending is saying. ”We all die, but not today”. […] Enjoy it while you can, life is so finite. Whenever you are born, and whenever you die, it’s all over. So enjoy that bit, that tiny little bit.’

After Life became the most watched British comedy of the decade at the end of 2021 with more than 100million views on Netflix. 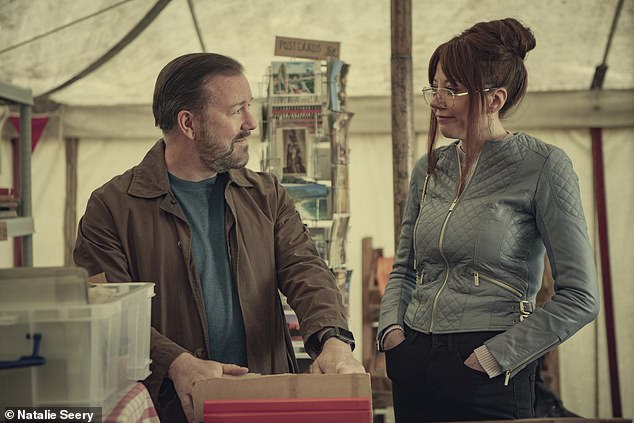 Important: While After Life’s final scene appeared to leave things on an ambiguous note, Ricky clarified that the closing moments were a sign that’s finally ready to move on

Indeed, The Office star claimed interacting with dogs every day became his own coping mechanism.

He previously said: ‘Dogs got me through this pandemic, if you had to socially distance from dogs I’d have been in trouble.

‘I go for a walk every day and I know hundreds of dogs by name and you always meet a few of your little friends and that sets me up for the day so dogs give me joy without a doubt.

‘Sitting at home, the ritual of being on the coach just me and Jane and the cat watching Netflix, creating stuff, having an idea that always excites me… and planning it, f***ing planning, planning’s out the window isn’t it.’

After Life season three is available on Netflix. 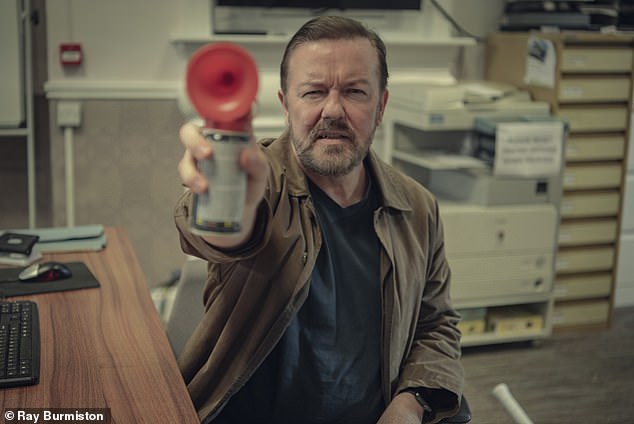 Important: After Life depicts the devastating story of local journalist Tony, who is struggling to move on with his life following the death of his wife Lisa to cancer