Alec Baldwin looked casual in all black as he picked up a take-out order near his home in East Hampton, New York Saturday.

The 64-year-old stepped out in a black golf shirt and slacks with brown shoes on his food run in the small coastal village on Long Island.

The Oscar nominee was clean-shaven but his salt and pepper hair was tousled by the wind blowing in from the Atlantic ocean. 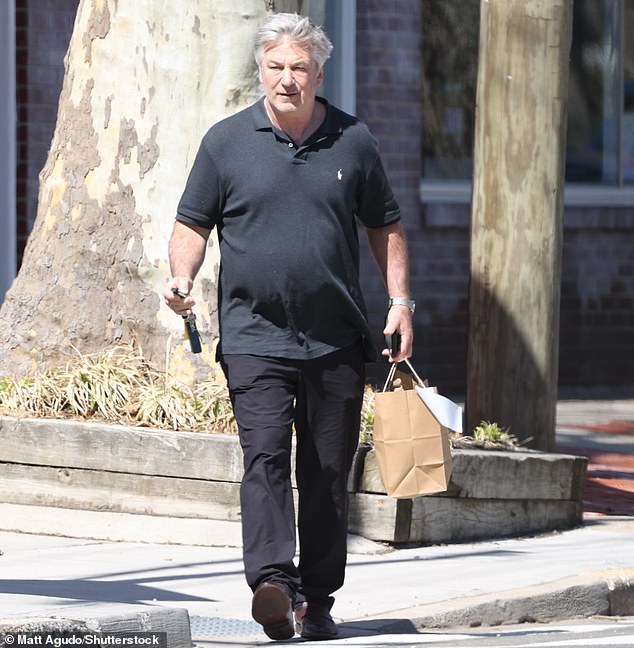 Food run: Alec Baldwin looked casual in all black as he picked up a take-out order near his home in East Hampton, New York Saturday

This coms after his son Rafael broke his arm when playing in a park in New York on Wednesday, causing him to spent hours inside the Lenox Hill Hospital.

Hilaria, 36, took to Instagram to share photos of their six-year-old son including a snap where her 64-year-old husband held their little one in his arms while Rafael wore a sling.

Another shot showed Rafael with breathing tubes spreading out all over his face and sticking in his nose. 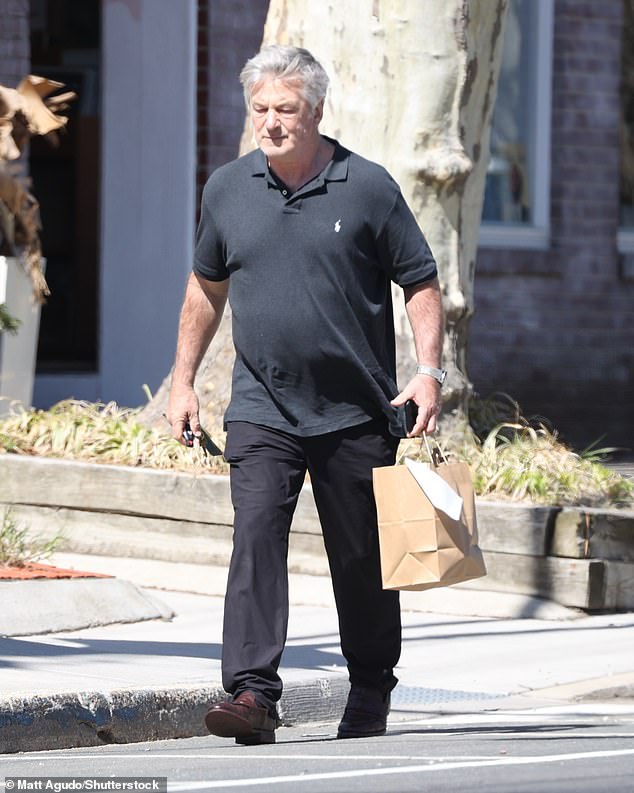 Casual: The 64-year-old stepped out in a black golf shirt and slacks with brown shoes on his food run in the small coastal village on Long Island 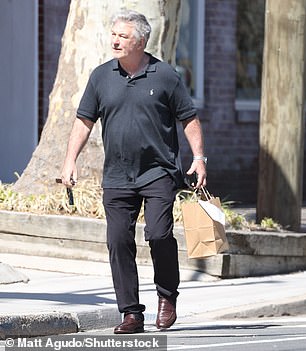 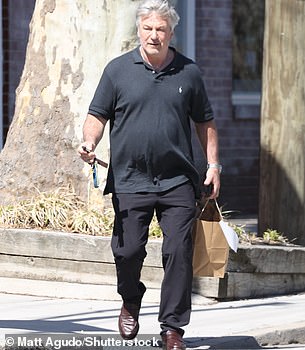 Investigation: The outing came days police released more than 150 hours of footage from the fatal shooting on the set of Rust, in which a gun the actor was holding misfired, killing cinematographer Halayna Hutchins

In a different picture, Rafael laid on the floor on top of myriad pillows while he tried to sleep.

A couple of his siblings seemed to take a serious interest in his cast, and he showed them his new arm adornment.

Hilaria, a yoga instructor and author, shared the long and difficult experience in her post’s caption. 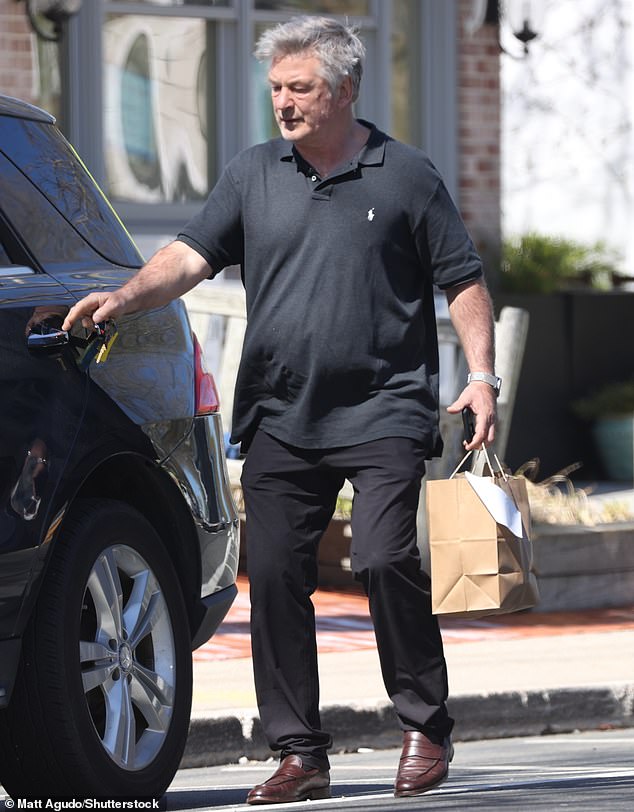 Kindness not cancel: Alec’s wife, Hilaria, 38, admonished her podcast listeners to end ‘cancel culture’ and instead ‘reach out to’ online critics ‘and  just tell them that you support them as a human’

‘Rafa broke his arm really badly yesterday, playing at the park,’ the caption read. ‘You will see him with a cast for quite a while now, so I wanted to give you a heads up. Thank you Lennox Hill emergency room for taking such good care of our baby. So grateful to the doctors and the nurses for your expertise and kindness.

‘This is a part of being a parent that is so heartbreaking. We were with the babies when it happened and to get that call makes your heart sink. His little voice on the phone “I want my mommy”…knowing even the 20 min to get to him is 20 min too long.

‘To not be able to immediately take away their pain and fear…oooof nothing prepares us for this, right? We were at the hospital until pretty late and then we made a bed on our floor (wild sleeper, was afraid he might fall off our bed). How many times he called out for me last night, I do not know. At one point I heard him whispering to himself, recounting what happened, saying over and over: “I broke my arm”.’

She finished off her post on a positive note, writing, ‘We are relieved that, while it will be a long recovery road, he is certainly on it [pink hearts emoji].’ 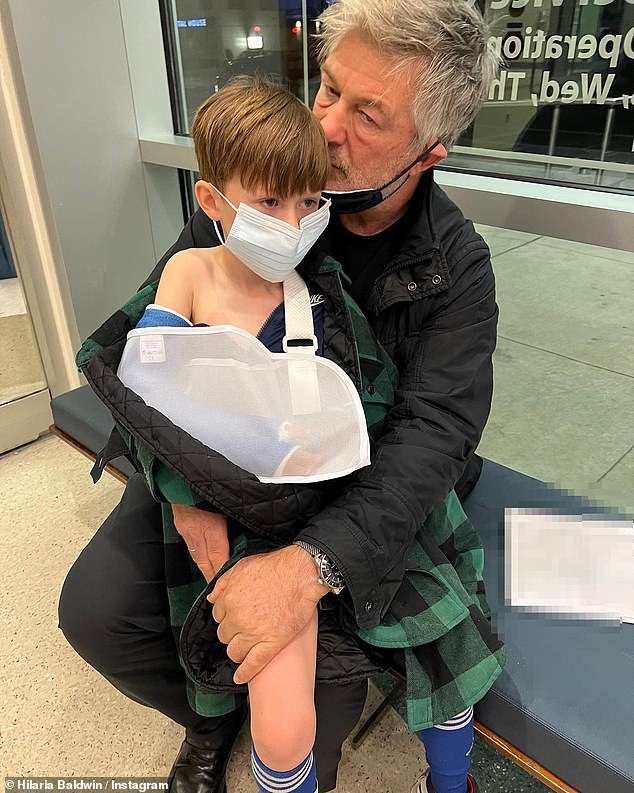 Scary: Alec and Hilaria Baldwin’s son Rafael spent hours in the hospital after breaking his arm on Wednesday

The outing occurred just days after investigators released 168 videos of footage before and after the fatal shooting of cinematographer Halayna Hutchins on the set of the film Rust when a gun the actor was holding reportedly misfired.

The director, Joel Souza, was also injured in the incident.

The actor’s wife, Hilaria Baldwin, 38, has called for an end to ‘cancel culture’ and ‘online mob attacks’ amid fears vicious trolling can ‘drive people to suicide’.

The Departed star has been at the center of vicious attacks online since in the fatal shooting.

The podcaster, who is currently expecting her seventh child with Alec, urged her Instagram followers to be more mindful of others, urging, ‘If you see somebody getting attacked by the online mob, or any kind of cancel culture, instead of scrolling past, or worst, getting involved, reach out to them and just tell them that you support them as a human.’ 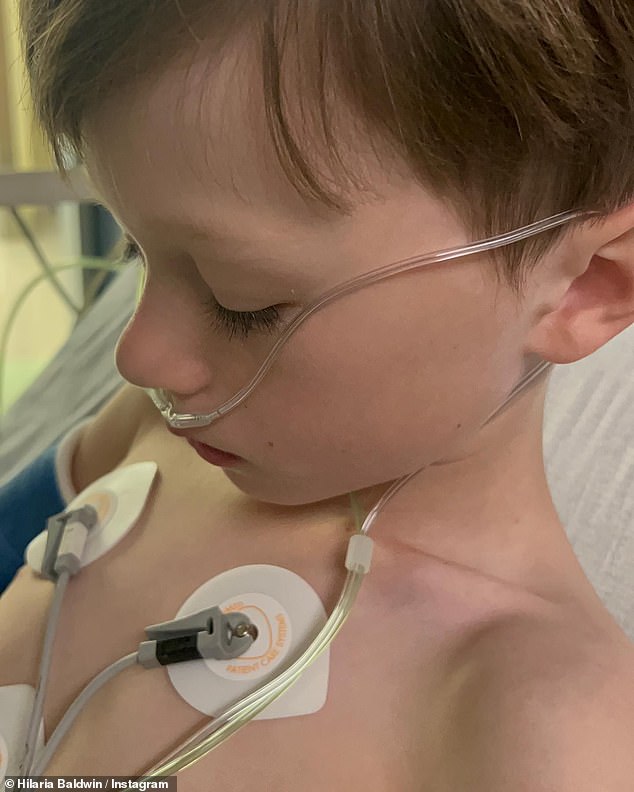 Breathing tubes: One shot showed Rafael with breathing tubes spreading out all over his face and sticking in his nose

‘You don’t have to agree with them a 100%, you don’t even have to even understand what they’re attacking them for.’

The former yoga teacher, who was subjected to online ridicule over her Spanish background in 2020, went on to add that social media hate can result in devastating consequences.

Speaking from personal experience, she added: ‘I can tell you, that this kind of attack is mental torture.’

‘This idea of nitpicking, and having partial information, and taking things out of context, or even when people completely disappoint you, it is not for us to be judging everybody all the time. It’s absolutely impossible to make absolutely everybody happy, and to be in alignment with everybody. We’re more divided than ever.’