Amanda Kloots slams trolls criticizing her for getting back into the dating game after husband Nick Cordero’s death: ‘How dare you judge anyone’

She announced Friday on The Talk that she was finally trying her hand at dating again just over a year after her husband Nick Cordero died from complications of Covid-19.

But Amanda Kloots’ optimistic news was greeted by some critical comments from social media users blasting her for moving on ‘too quickly.’

The 39-year-old fitness instructor–turned–television host wasn’t having it and took to her Instagram Stories to call out a rude commenter. 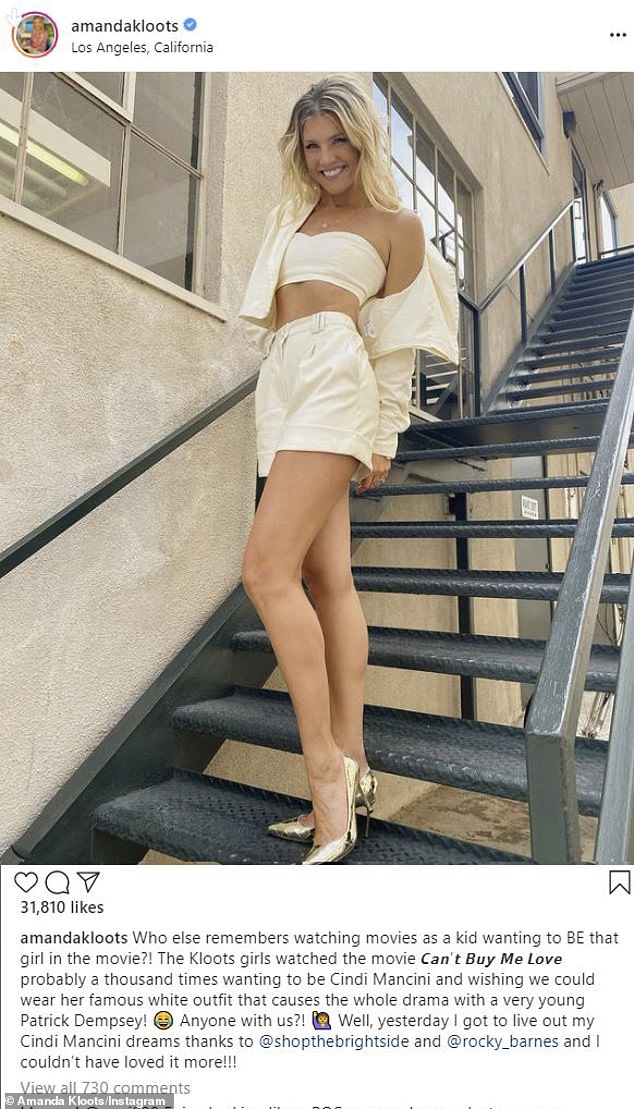 Not taking it: Amanda Kloots, 39, struck back at a social media troll who criticized her for dating too soon after her husband Nick Cordero died last year from complications of Covid-19

Amanda originally posted a sizzling snap of herself in a cream-colored tube top with matching high-waisted shirts and a jacket that she left open to showcase her stunning fit figure.

‘Who else remembers watching movies as a kid wanting to BE that girl in the movie?! The Kloots girls watched the movie Can’t Buy Me Love probably a thousand times wanting to be Cindi Mancini and wishing we could wear her famous white outfit that causes the whole drama with a very young Patrick Dempsey!’ she wrote.

‘Anyone with us?! Well, yesterday I got to live out my Cindi Mancini dreams thanks to @shopthebrightside and @rocky_barnes and I couldn’t have loved it more!!!’

Later on Friday, she posted a screenshot of an offending comment to her Insta Stories. 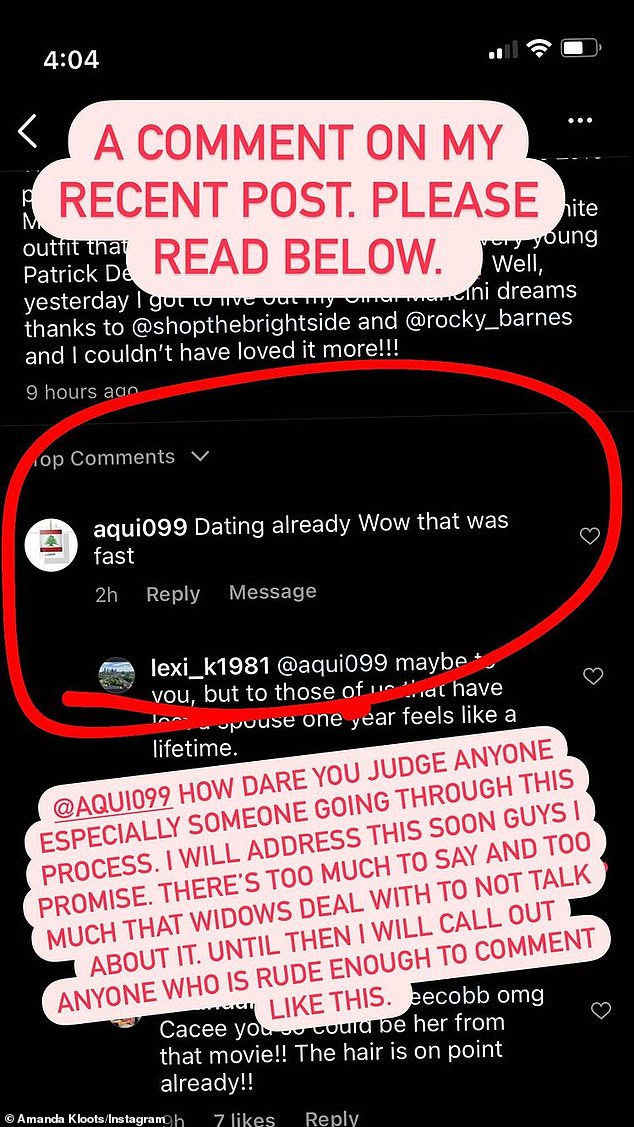 Dropping bombs: After posting a sizzling photo inspired by the ’80s rom-com Can’t Buy Me Love, a troll commented, ‘Datin already Wow that was fast’ 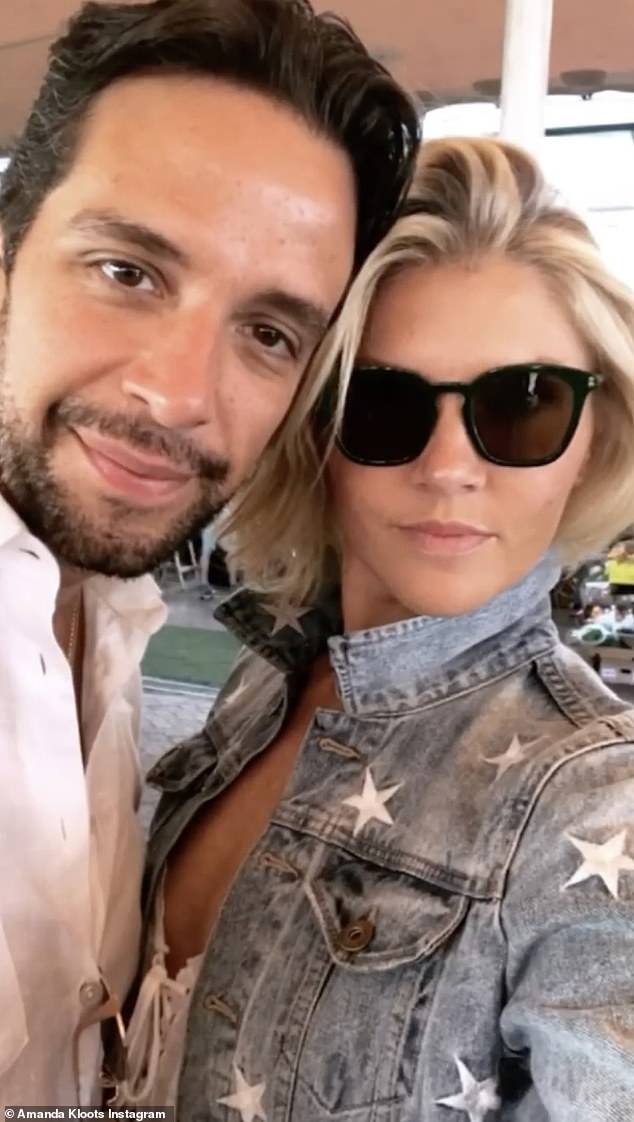 None of their business: Amanda posted a screenshot and wrote, ‘How dare you judge anyone especially someone going through this process.’ She also promised to address it to her fans later

‘Dating already Wow that was fast,’ the user wrote.

Amanda sounded furious in her comment, even as she acknowledged it was a subject worth discussion down the line.

‘How dare you judge anyone especially someone going through this process,’ she captioned the screenshot.

‘I will address this soon guys I promise. There’s too much to say and too much that widows deal with to not talk about it. Until then I will call out anyone who is rude enough to comment like this.’

Puzzlingly, Amanda’s post didn’t even mention that she had started dating again, as she saved that for a brief announcement earlier in the day on The Talk. 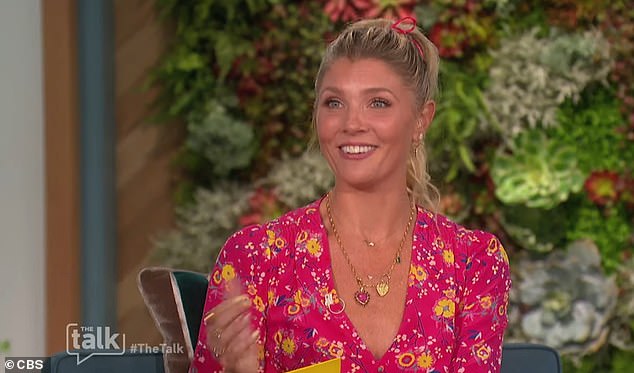 Moving on: Amanda revealed Friday on The Talk that she was dating for the first time following her husband Nick Cordero’s death from Covid-19 on July 5, 2020

On The Talk, Amanda revealed that she was a total neophyte when it came to dating because she met both of her husbands at work on musical theater productions.

‘Both of my husbands, I met doing Broadway shows. We became friends first, then we got married,’ she explained.

‘Obviously with Nick, we had a child,’ she continued, adding, ‘I’ve never actually had to date.’

She found the experience of meeting new people intimidating now that she’s in her late 30s. 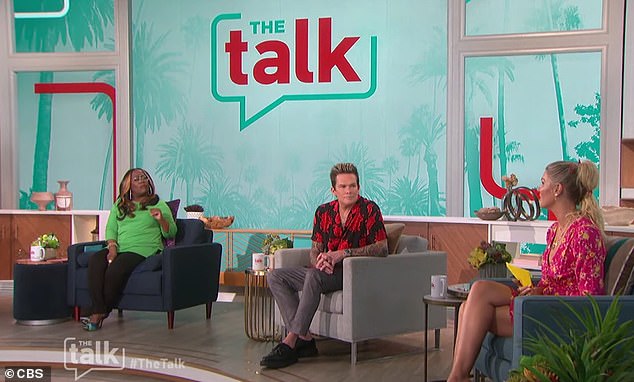 It’s all new: Amanda revealed she never really dated and had met her first two husbands while working on Broadway. ‘We became friends first, then we got married,’ she explained 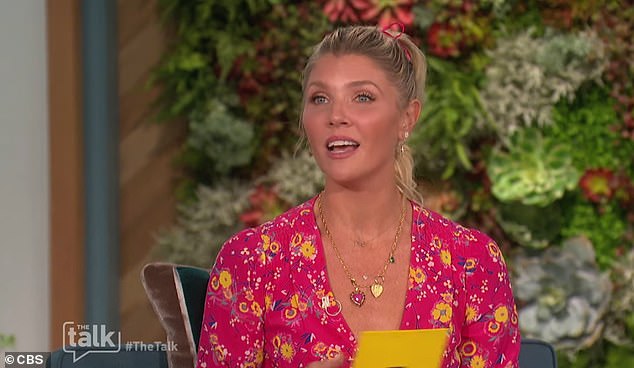 Intimidating: ‘I just started dating again and it is so crazy to be dating for the first time at 39 years old,’ she admitted. ‘And it’s quite terrifying and really out of your element, and it’s just hard. It is hard’

‘I just started dating again and it is so crazy to be dating for the first time at 39 years old,’ Amanda admitted. ‘And it’s quite terrifying and really out of your element, and it’s just hard. It is hard.’

But even if she was scared about making herself available again, she seemed upbeat about her experiences when her co-host Elaine Welteroth asked how things were going so far.

‘It’s all wonderful,’ she said. ‘It’s wonderful people I’m meeting, and it’s been a great process so far. But I’ll just say it’s very hard without getting into too many details.’

Earlier this month, the new TV host remembered her late husband Nick Cordero on the one-year anniversary of his death.

‘Today hurts, there is no other way around it. One year ago you left us and became our angel in heaven,’ she wrote to her 669K Instagram followers while posting a montage of loving scenes between the former couple. 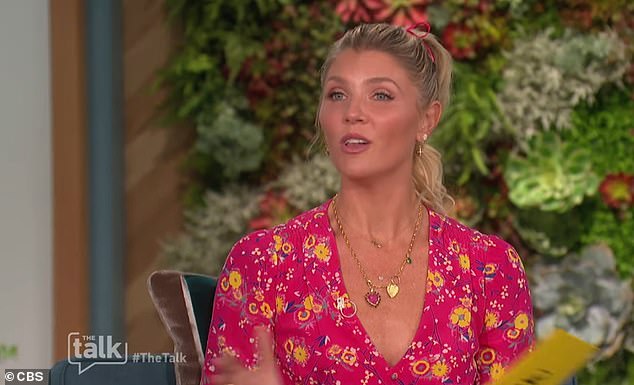 Mixed emotions: ‘It’s wonderful people I’m meeting, and it’s been a great process so far,’ she continued. ‘But I’ll just say it’s very hard without getting into too many details’ 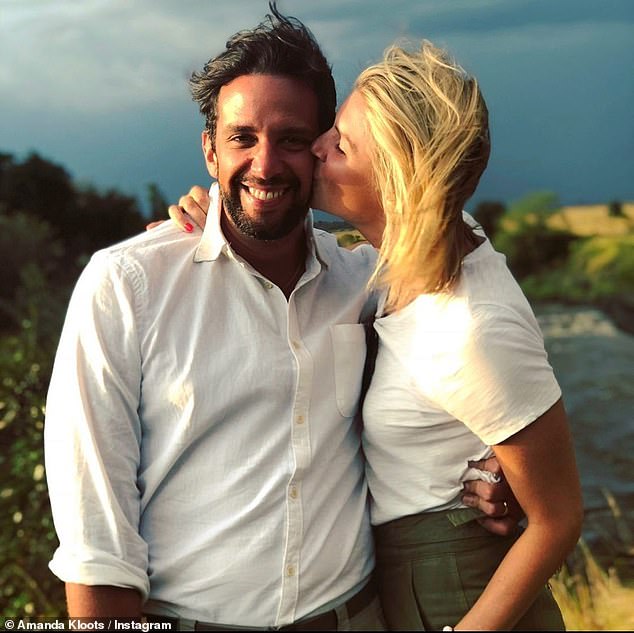 Looking back: On July 5, she marked one year without her husband Nick Cordero in a heartbreaking Instagram post. ‘What happened was unthinkable, losing you was my biggest fear’

She wrote that the Broadway star was ‘surrounded by so much love’ in his finals days.

‘What happened was unthinkable, losing you was my biggest fear,’ she continued. ‘I used to tell you all the time, “Don’t you dare go anywhere. If I lost you, I don’t know what I’d do.”‘

Although their marriage was short-lived, she said their romance would have an enduring impact on her life.

‘We only had a few short years together but they were filled with so much love, laughter, adventure, dreams, change and growth. It was my “Nick era” and I’ll have it forever.’

Nick died on July 5 of last year, after spending 95 days in the hospital, first battling the effects of Covid-19, then the last damage it caused to his body even after it overcame the virus.

During the ordeal, his right leg had to be amputated, and he suffered mini-strokes and developed scars in his lungs before succumbing. 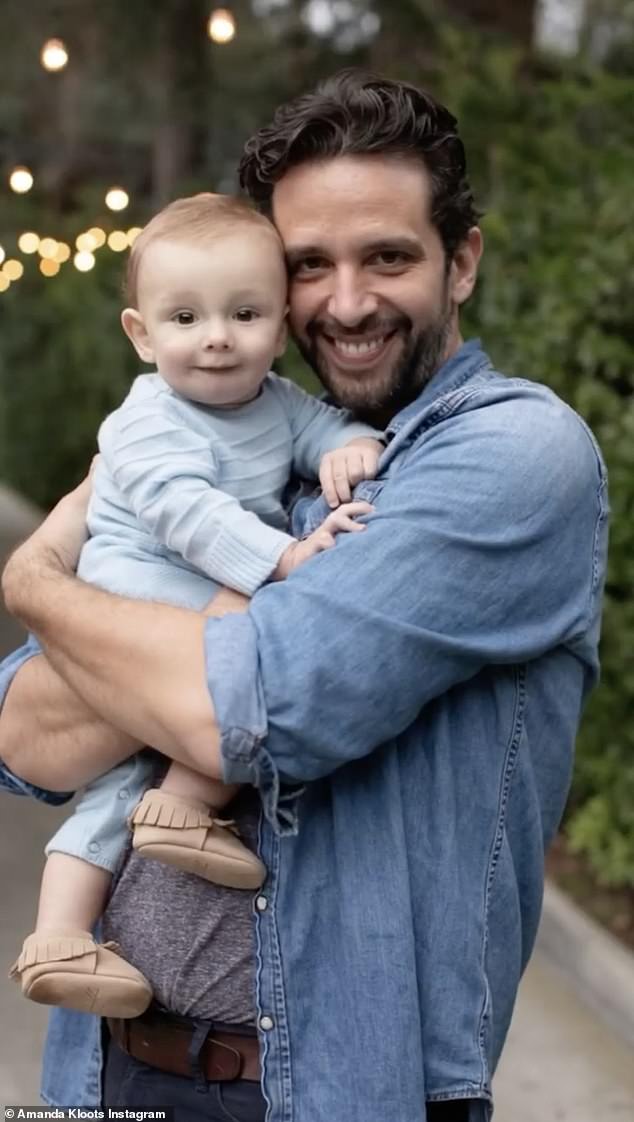 Long fight: Nick spent 95 days in the hospital battling Covid-19, but even after he overcame the virus his body was too ravaged by its effects to go on. He and Amanda shared a two-year-old son Elvis

Later this month, Amanda showed how much their son Elvis had grown as she celebrated his first day of preschool.

The little boy showed off an adorable smile while wearing a cute T-shirt and matching shorts covered in smiley faces as he put on his backpack for school.

‘I was doing fine but all of a sudden got super emotional. Another part of grief you have to face that you don’t realize until the moment,’ his mother wrote on a photo of the backpack she packed for him.

‘Nick should be here. We should be doing this together. Chin up. Brave face,’ she added. 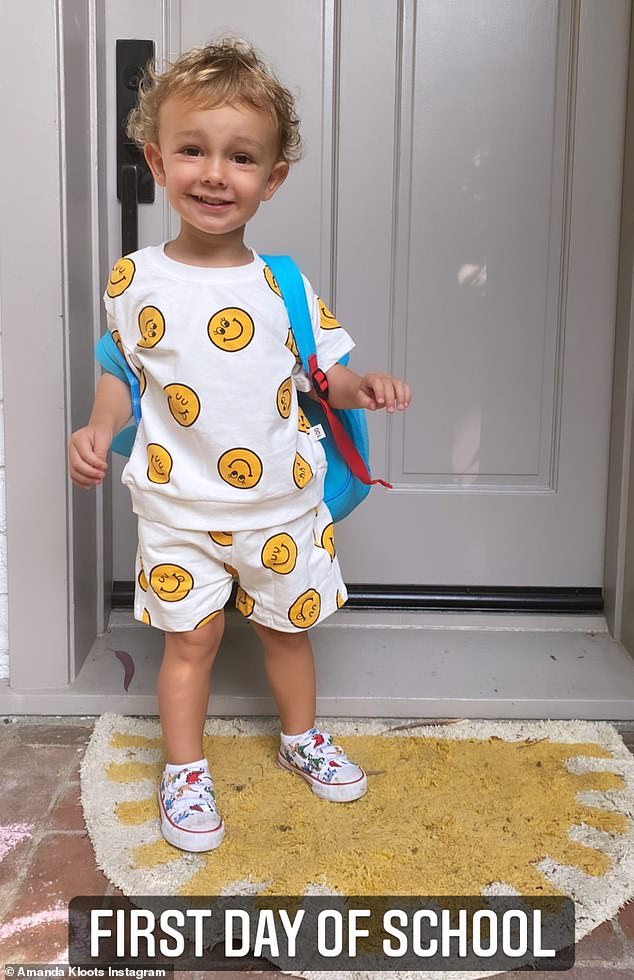 First day! Amanda got emotional later in the month as Elvis headed off for his first day of preschool