‘Let me be your obsession’: Love Island’s Arabella Chi sizzles as she poses in white thong underwear and crop- top

Her social media pages are sprinkled with sensational underwear snaps.

And Arabella Chi, 30, added to her collection on Saturday as she shared some pictures of herself in some white lingerie with cut-out detail and a backless green cropped top.

The former Love Island star left little to the imagination, showing off her peachy derriere as she posed on the stairs at her home, writing on Instagram: ‘Let me be your obsession.’ 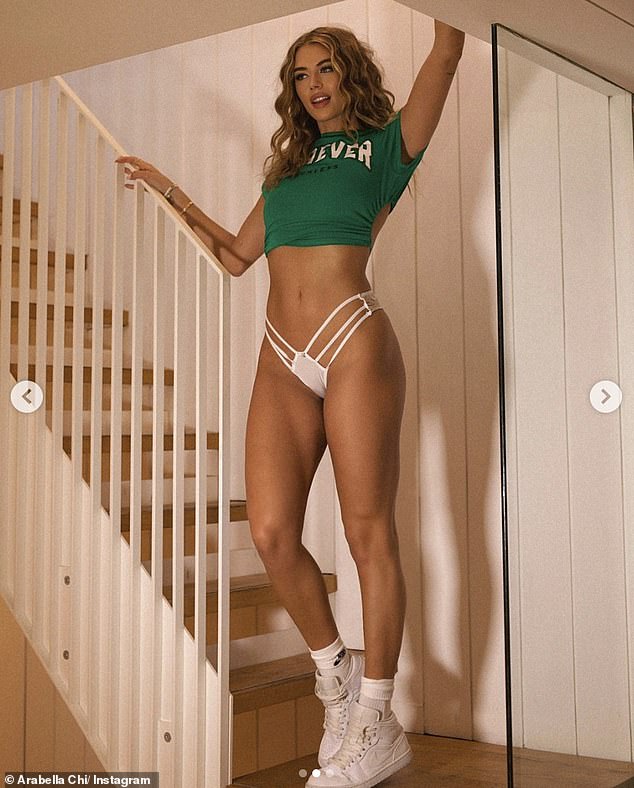 Simply sensational: Arabella Chi, 30, shared some Instagram pictures of herself in some white lingerie with cut-out detail and a backless green cropped top on Saturday

Her impressively flat stomach was on show while she sported a healthy tan in the shots.

The television personality made the most of her long slender legs, wearing nothing but her underwear by Fashion Nova, leaving her pins on display.

She wore a pair of comfortable white trainers and matching socks on her feet. 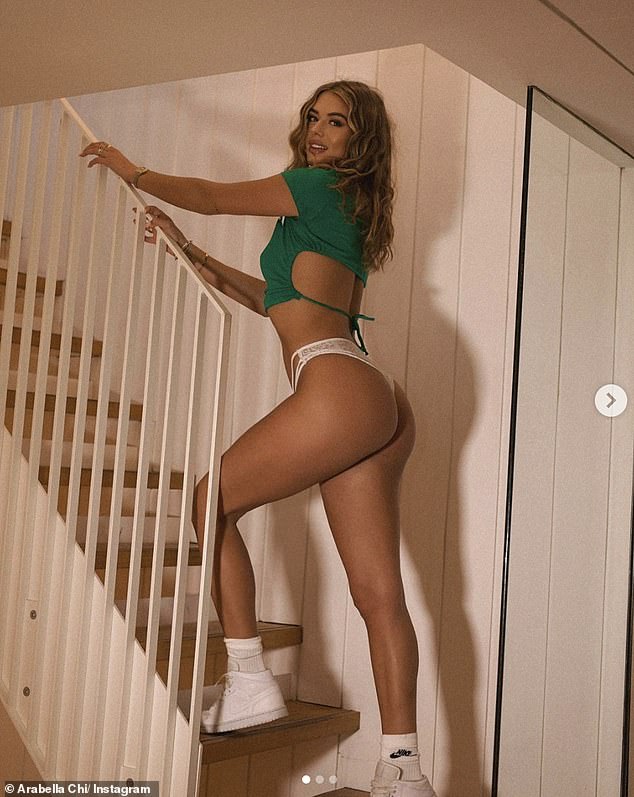 Posing up a storm: The former Love Island star left little to the imagination, showing off her peachy derriere as she posed on the stairs at her home

The reality star could be seen wearing a green Forever Reckless backless top, also by Fashion Nova, in the images.

Her hair was styled into waves, with her tresses gently resting on her shoulders.

It comes after she signed up for the show Celebrity Ex In The City – an MTV spin-off of Ex On The Beach – which aims to aid stars in finding love again through blind dates after heartache. 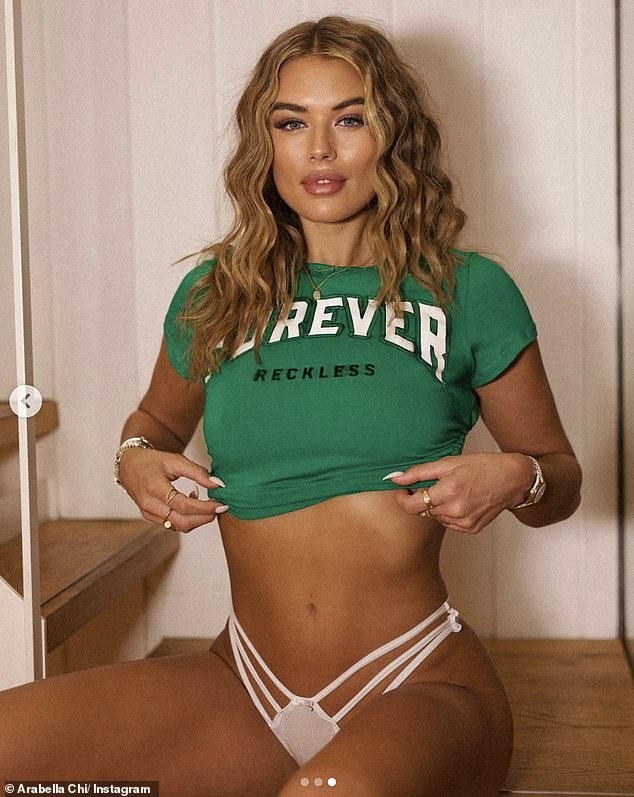 In style: Wearing the clothing by Fashion Nova, Arabella wrote online: ‘Let me be your obsession’

Arabella was faced with her ex Kori Sampson on last month’s episode, and many were shocked to find out they were dating because they never went public with their relationship.

Kori revealed on the show that Arabella has continued to e-mail him even after their split.

The awkwardness was made even worse by the fact Arabella was on a date with a prospective flame. 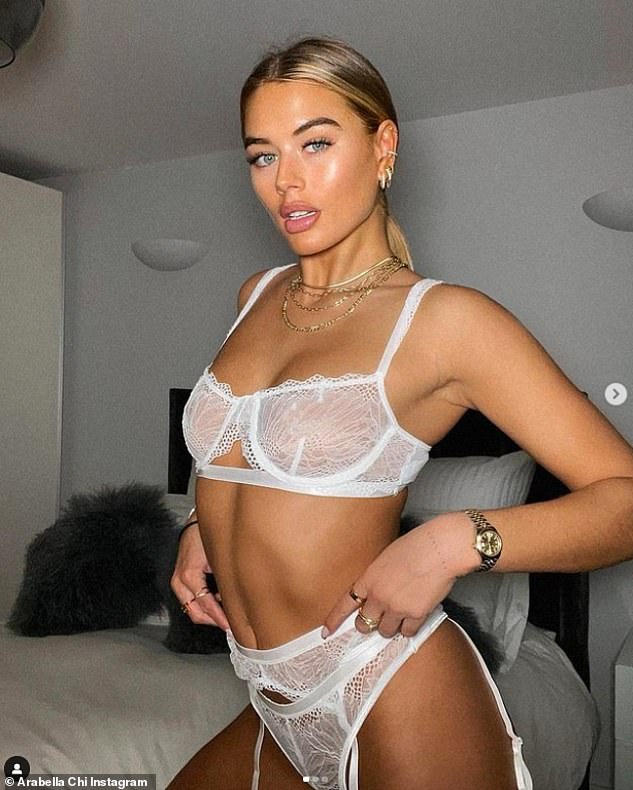 Stunning: Arabella also showed off her toned physique on Saturday as she posed up a storm in a separate Instagram post, wearing white lingerie

However, she denied any potential spark with Tom, claiming that she and the DJ were just good friends.

She said: ‘I’m 100 percent single and for the first time in my life I’m learning about myself and I know what I want now in a guy.’ 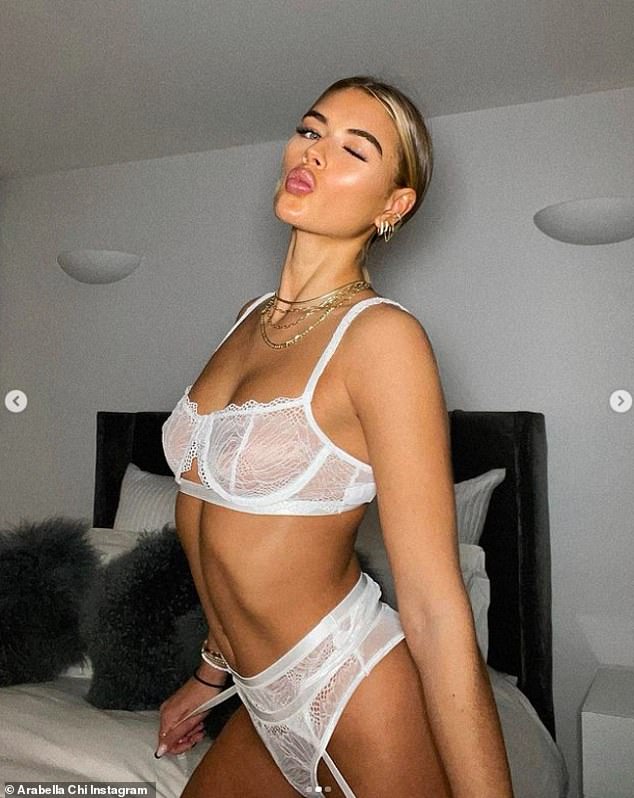 Looking good: She showed off her toned abs in the skimpy two piece which came complete with a garter belt and suspenders