Arnold Schwarzenegger was pictured leaving a hair salon with two of his friends in Beverly Hills on Friday afternoon.

The 74-year-old actor appeared to be living the high life as he kept a cigar in his mouth while chatting with his pals before hopping into the driver’s seat of his custom-made Hummer.

The Terminator star’s outing comes not long after he penned an essay to express his views about wearing a mask amid the ongoing state of the COVID-19 pandemic. 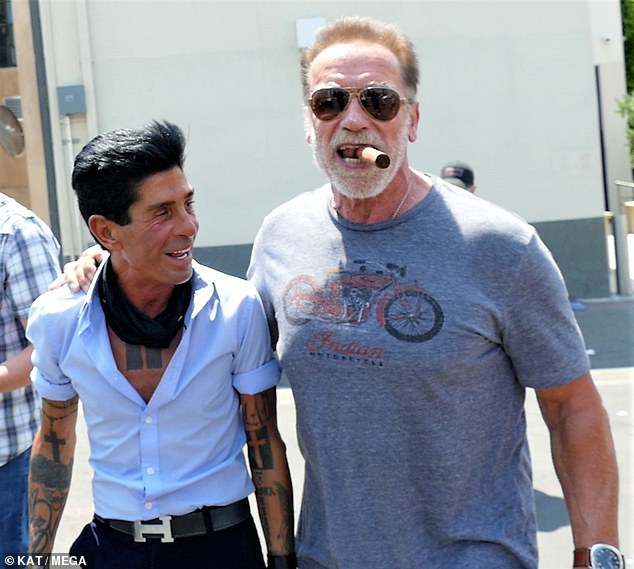 Enjoying himself: Arnold Schwarzenegger was seen spending time with his friends while leaving a hair salon in Beverly Hills on Friday afternoon

Schwarzenegger was seen wearing a gray graphic-printed t-shirt while spending time with his friends.

The former governor of California sported a pair of black shorts that showed off his still-impressively chiseled legs during the outing.

He also wore a set of gray slip-on shoes, as well as stylish tinted aviator-style sunglasses.

At one point, the Predator star donned a cowboy hat after exiting his Hummer. 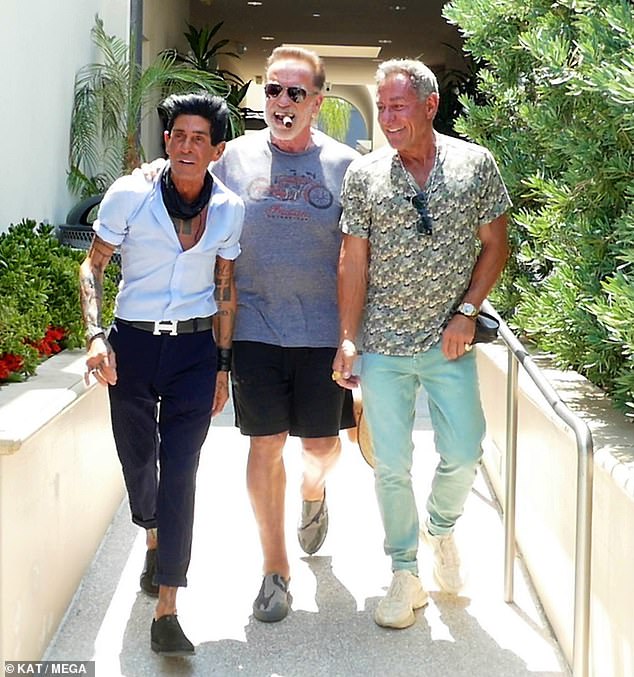 Dressed down: The performer was seen wearing a graphic-printed t-shirt and a pair of shorts during his outing

Earlier this week, Schwarzenegger shared a video to his Instagram account to express his views about the ongoing state of the pandemic.

In the clip, he criticized those who refused to wear a mask, as he felt that said individuals only served to keep the current state of affairs regarding the coronavirus going on for longer.

The actor went on to pen an essay for The Atlantic, where he began by making his views about not wearing facial coverings known very early on in the piece.

‘You have the freedom to wear no mask. But if you exercise that freedom, you’re a schmuck—because you’re supposed to protect your fellow Americans,’ he wrote. 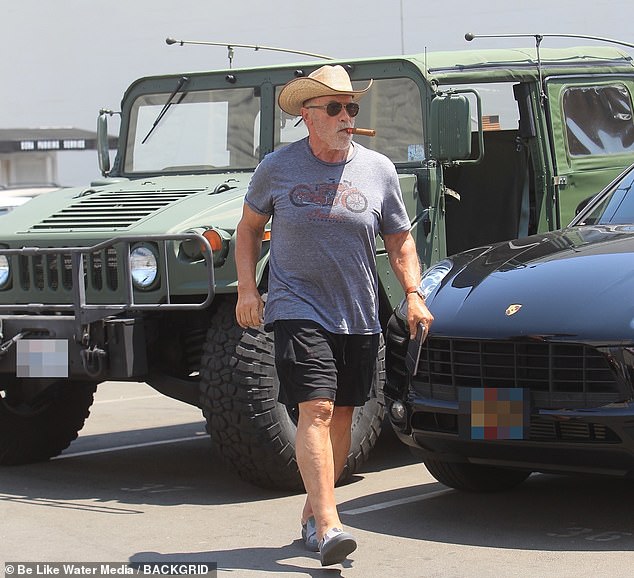 Living the high life: The Terminator star kept a cigar in his mouth as he spent time with his pals 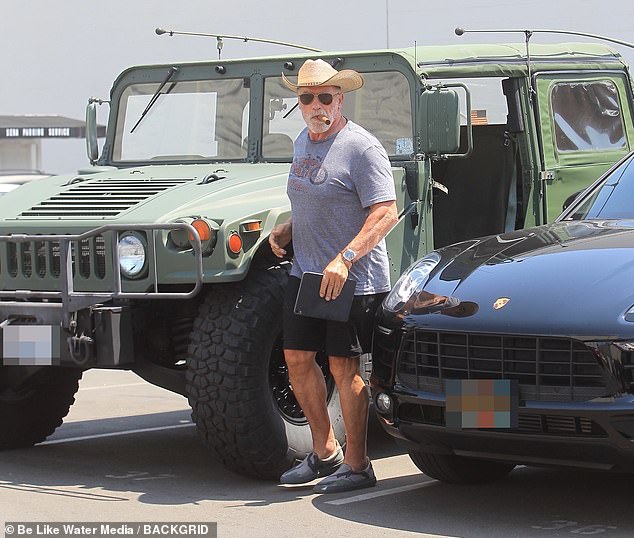 Making his views known: Schwarzenegger recently penned an essay for The Atlantic where he expressed his opinions about the pandemic publicly

Schwarzenegger also spoke about the comments that he received regarding his opinions and noted that he felt as if many individuals were misinterpreting a basic tenet of American democracy.

He noted: ‘some of the responses really worried me. Many people told me that the Constitution gives them rights, but not responsibilities. They feel no duty to protect their fellow citizens.’

‘Our country became great because every generation before us knew that liberty and duty go hand in hand. I am worried that many of my fellow Americans have now lost sight of that,’ he added.

The True Lies star also remarked that he had begun to hold pessimistic views about the country as a result of the actions of anti-maskers. 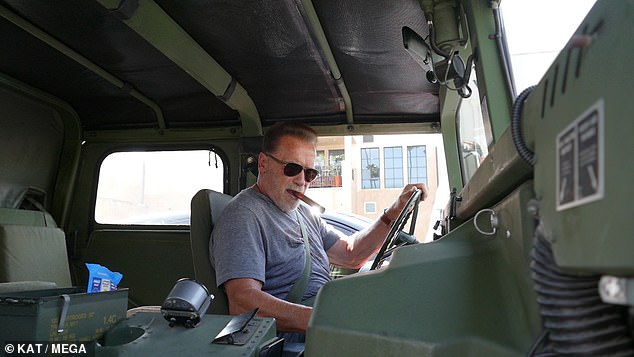 Worried: The Kindergarten Cop star wrote that he was afraid that many Americans felt ‘no duty to protect their fellow citizens’ 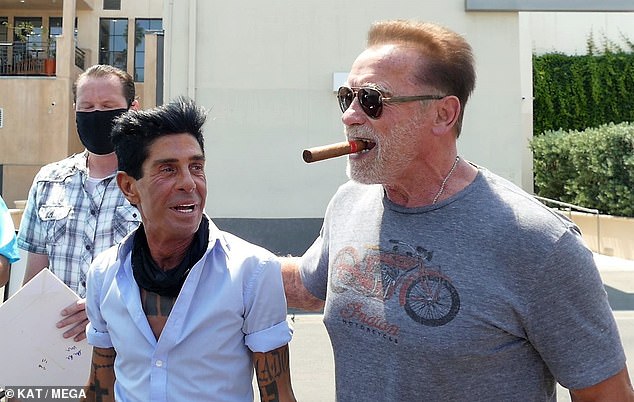 Feeling down: The performer also wrote that he had begun to ‘really worry about the future of our country’ 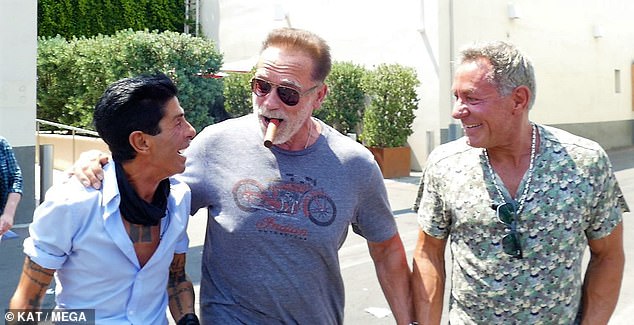 Looking forward: Schwarzenegger concluded by writing that Americans ‘need to prove to ourselves and to the world that we can unite to defeat a common enemy’

‘When I look at the response to this pandemic, I really worry about the future of our country. We have lost more than 600,000 Americans to COVID-19,’ he noted.

Schwarzenegger was very open about his disappointment, and contrasted the actions taken by the public during World War II and the opinions of modern citizens.

He asked: ‘Americans lived through four years of brutal sacrifice, and we’re going to throw fits about putting a mask over our mouth and nose?’

The Kindergarten Cop star expressed that he wanted to see more people adjusting to the pandemic and taking care of their fellow citizens. 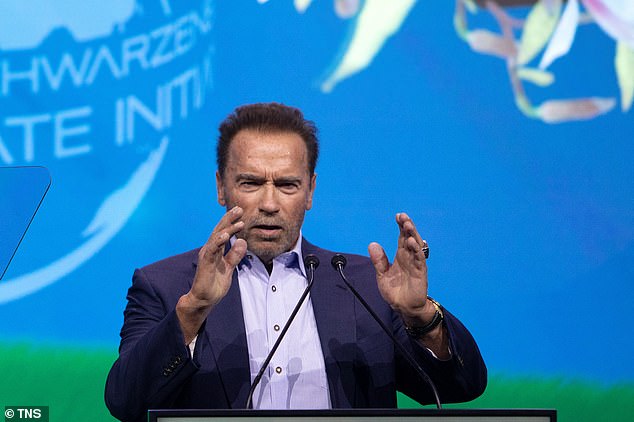 Unity: ‘We need to prove to ourselves and to the world that we can unite to defeat a common enemy, because, trust me, the coronavirus is not the biggest challenge we will face this century,’ he wrote; Arnold pictured in July

‘We need to protect ourselves and win this war. We don’t need to close our economies again. We just need to come together like the generations of Americans who came before us, and to give just a tiny fraction of what they gave,’ he noted.

Schwarzenegger concluded by writing that he wanted more people to serve as role models for others in terms of responding to the conditions set by the pandemic.

‘We need to prove to ourselves and to the world that we can unite to defeat a common enemy, because, trust me, the coronavirus is not the biggest challenge we will face this century,’ he wrote.