Boycie, the dodgy car dealer who gave Del Boy a run for his money: BETH HALE pays tribute to beloved Only Fools And Horses star John Challis following his death at 79

He was only supposed to be in one episode. But as in all the best comedy, sometimes you simply can’t predict what, or in this case who, is going to be a hit.

Now, of course, the rat-a-tat of Boycie’s laugh and his signature cry — ‘Marleeeene!’ — is as much a part of the Only Fools And Horses canon as Del Boy’s barrow-boy banter and Rodney’s gullibility.

Yesterday, tributes poured in for John Challis, the actor who was trying to make a career for himself in the U.S. when he was asked by writer John Sullivan to appear as a dodgy car salesman, selling a clapped-out motor to Rodney.

At 79, Challis had continued to work with the same vigour he threw into immortalising Boycie — a role for which he happily jettisoned U.S. ambitions when more scripts landed — but was forced to cancel a speaking tour earlier this month after just one appearance, due to ill health. 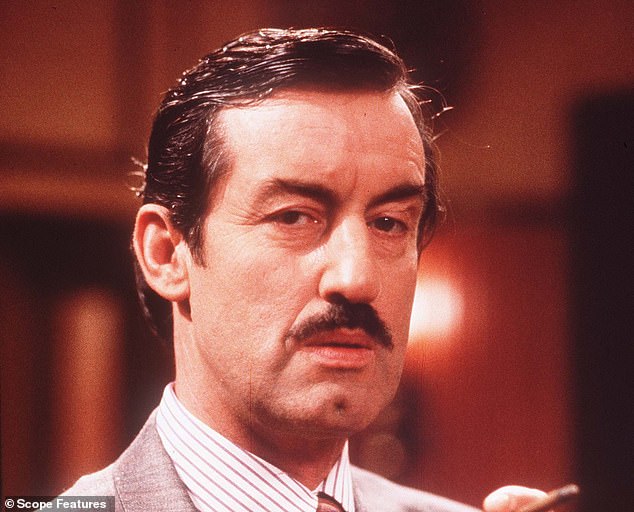 Tributes poured in for John Challis, the actor who was trying to make a career for himself in the U.S. when he was asked by writer John Sullivan to appear as a dodgy car salesman, selling a clapped-out motor to Rodney

Announcing his death, his family said yesterday that he went ‘peacefully in his sleep’ after a ‘long battle with cancer’.

‘It is with heavy hearts that we bring you such sad news,’ they added. ‘He will always be loved for being “Boycie” and leaves a great legacy of work that will continue to bring pleasure and smiles for many years to come.’

There is no doubt of that. Only Fools And Horses is still one of the most popular British sitcoms. And John Challis with Boycie’s nasal twang was crucial to its success.

Earlier this year, Challis was granted honorary citizenship in Serbia for his portrayal of the second-hand car dealer, after he visited the country to film the documentary Boycie In Belgrade, which explores Serbia’s love affair with the show.

Challis explained the show is as popular in the Balkan state as it is in Britain: ‘A local DJ said it was the only thing that made them smile during their wars.’

He added that Serbian people identify with the characters: ‘They love Boycie, Trigger [the road sweeper played by Roger Lloyd-Pack], Del Boy, Rodney . . . they have murals of them all over.’ 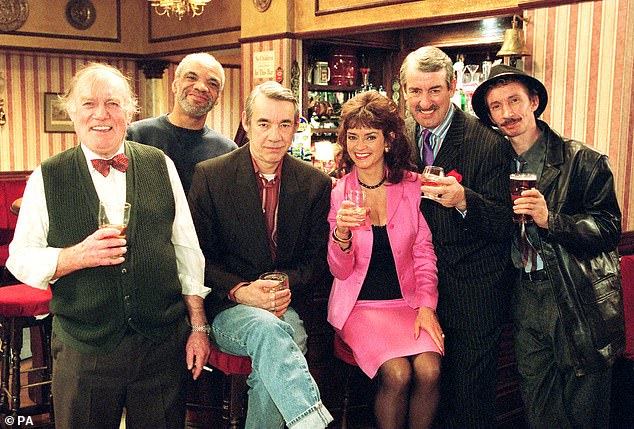 He was only supposed to be in one episode. But as in all the best comedy, sometimes you simply can’t predict what, or in this case who, is going to be a hit. Now, of course, the rat-a-tat of Boycie’s laugh and his signature cry — ‘Marleeeene!’ — is as much a part of the Only Fools And Horses canon as Del Boy’s barrow-boy banter and Rodney’s gullibility

Clips of Boycie’s infectious laugh proliferate on the internet. But he could deliver a line with deadpan panache, too.

Take the 1996 Christmas Day episode in which he asks Del Boy and Rodney, who appear at a wake dressed as Batman and Robin: ‘What have you two come as, then?’ It’s one of many gems.

Sir David Jason, who played Derek ‘Del Boy’ Trotter, with whom Boycie so memorably butted heads for so long, was among the first to pay tribute yesterday.

‘It is with much sadness to hear that John Challis, a dear friend, has passed away. He was a wonderful actor, a gentleman in the true sense of the word and I know he will be missed by so many.’

Sue Holderness, the actress who played Boycie’s wife Marlene (another character only meant to appear once), said: ‘Marlene without Boycie — it’s unthinkable. John Challis was my partner on screen and stage for 36 years and my beloved friend. R.I.P. darling John. I will miss you every day.’

Challis will be missed most by the woman who filled that role off screen, Carol Davies, to whom he was married for nearly 30 years.

And some of his most hilarious lines

‘Oh turn it up, Del Boy. Trigger couldn’t organise a prayer in a mosque.’

‘I’ve left my Mercedes parked downstairs and you know what they’re like on this estate. They’d have the wheels off a jumbo if it flew too low.’

Mike [the barman]: ‘I’ve never seen these Driscoll brothers. What do they look like?’

Boycie: ‘Well one of them looks like he was evicted from The Planet Of The Apes.’

Mike: ‘Those women went through the war for us.’

Boycie: ‘Yeah, you can still see the bomb damage on some of ’em.’

‘I love her, don’t get me wrong, but sometimes I think getting married was the worst mistake I ever made in my life. I sometimes think back to when we first met in Lewisham Grove. I wish I never walked into that betting shop now.’

‘Did you know, 500 years ago this was a green and peaceful area? The old Earl of Peckham had a castle where the Kwik-Fit exhaust centre now stands. Flaxen-haired maidens used to dance round the village maypole of an evening. And then one fateful medieval day, the Trotter clan arrived in a stolen Zephyr. Before you knew it, the flaxen-haired maiden was up the spout, the old Earl had been sold some hooky armour and someone nicked the maypole.’

The actor was once asked what had been a turning point in his life and notably did not cite the role for which he is best known. Instead, he said: ‘Meeting my fourth wife, Carol. I’d pretty well resigned myself to being single because I was convinced I was hopeless at relationships after having three failed marriages behind me. She believed in me, grounded me, and was such a steadying influence and we’ve been married 25 years.’

For Challis, displays of love were scarce when he was growing up in South-East London as the only child of Joan, a teacher, and Alec, the son of a steelworker who became a civil servant.

‘I was a great disappointment to him,’ he would tell the Mail in an interview in 2014. ‘He wanted me to be heavily qualified, to extend his own achievements.

‘I remember hearing my parents arguing about Dad beating me. My mother would plead with him not to, but that had been the way he’d been brought up. As I got older, I’d be jealous seeing other people with their parents because of their obvious loving relationship.

‘Our household was different. Other parents were proud of their children. Not mine.’

Even when success came calling, praise was in short supply.

‘Then he came to see me in Tom Stoppard’s Dirty Linen, a rare event for him. We sat at the table after Sunday lunch and he said, “That play . . . was so proud of you.” He was drunk which may explain why he allowed his guard to drop. I burst into tears. He’d never, ever said anything like that. And as it turned out, he never did again.’

That Challis would later nurse his father through Alzheimer’s is testament to the person he was.

The man who longed to have children, but couldn’t, was training to become an estate agent when he answered the acting bug.

Early roles included gangster drama Big Breadwinner Hog in 1969 and a role on Z-Cars as Sergeant Culshaw between 1971 and 1975. He also appeared in Doctor Who and Citizen Smith, but it wasn’t until Boycie, at 39, that he became a household name.

The first script dropped through his door in America in 1980. It was a ‘mild irritant’, he would later say, to have to come back. But boy was he glad he did. The episode in which he made his debut was the second of the first series in 1981 and he never looked back, playing Terrance Aubrey Boyce until 2003. Marlene didn’t appear until 1985.

His character eventually became a wealthy man and Challis took Boycie and Marlene into a spin-off show, The Green Green Grass.

His own fortunes also rose. He started off earning £400 to £600 an episode, he said, but was paid £200,000 a year for The Green Green Grass (but he marvelled at how much better the pay was for a single line for an ad campaign).

He was also played Monty Staines in ITV’s Benidorm.

He performed with the Royal Shakespeare Company and the National Theatre, but it always came back to Boycie.

‘He’s always with me,’ Challis would say. ‘He’s like my shadow. People come up to me when I’m out and about — even when I’m abroad — and say how they enjoyed him and want to reminisce.

‘Often they don’t know my name, so they just say “Boycie”. As a young actor, you dream of being in something that catches on, and when it does, it’s extraordinary.

‘People expect me to be like the character but I’m not — I’m not knowledgeable about cars, for a start. I based him on a man I met in pub who had a pedantic way of speaking. Also, he’s quite arrogant and snobbish, which isn’t me.’

And that laugh came from a chance encounter in a boozer, too: it ‘just appeared one day in rehearsal’, when the series was under way, Challis said: ‘I remembered somebody in the pub who laughed like that, it was a woman … a sort of machine-gun laugh, and I did it and everybody laughed so we kept it in.’

When he wasn’t acting, he and his wife worked together doing up their Herefordshire home, Wigmore Abbey, an abbot’s lodging which they purchased in the 1990s, when it was the only habitable part of a once-great monastery.

They uncovered extensive gardens, where Challis would enjoy long walks in lieu of the gym.

He set up his own publishing firm and wrote two autobiographies and a book about his house and garden. But it was always performing, he said, that was the best tonic. Along with his wife Carol.