Home » Cameron Diaz, 48, shares her first post in a MONTH to model a shirt

Cameron Diaz, 48, shares a very RARE Instagram photo to model a shirt made by friend Stella McCartney… as she has not acted in a film in SEVEN YEARS

Cameron Diaz does not pop up on social media very often.

But this week the 48-year-old the Mask actress made an appearance on Instagram while wearing a shirt made by her friend Stella McCartney to raise money for the Greenpeace UK.

The blonde beauty has not acted in a film since 2014’s Annie as she has wanted to take time off to be with her husband Benji Madden as well as her baby girl Raddix, one. 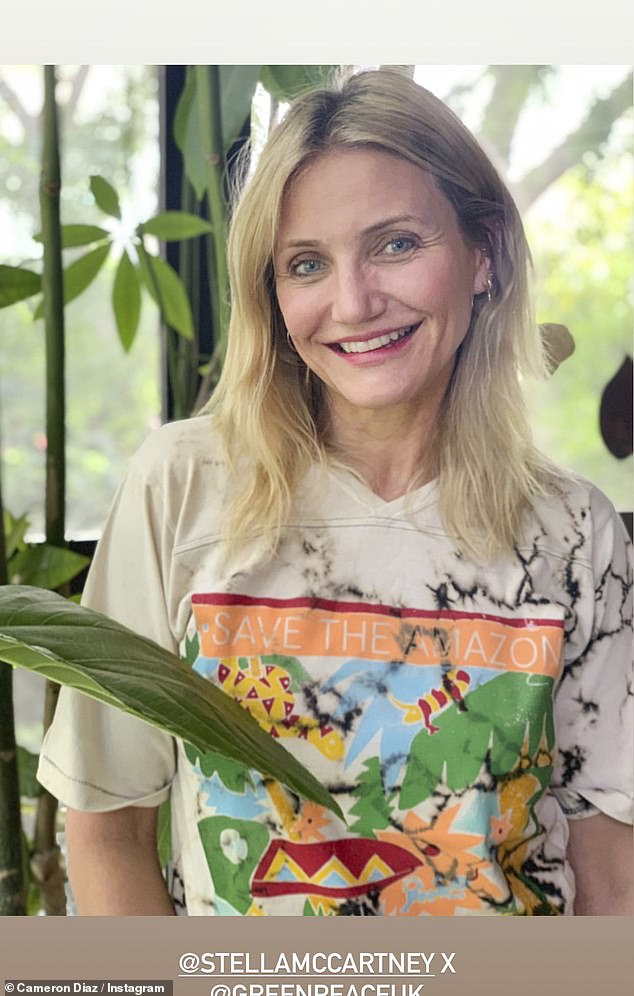 New look: Cameron Diaz does not pop up on social media very often. But this week the 48-year-old the Mask actress made an appearance on Instagram while wearing a shirt made by her friend Stella McCartney to raise money for the Greenpeace UK

The star had very little makeup on and her hair was only lightly brushed as she posed for the camera.

The silver screen siren had on a shirt made by designer Stella – the daughter of Beatles vet Paul McCartney – that had Save The Amazon written on the front.

The links were to Stella McCartney X and Greenpeace UK.

The What Happens In Vegas… star was likely in her home in Beverly Hills. 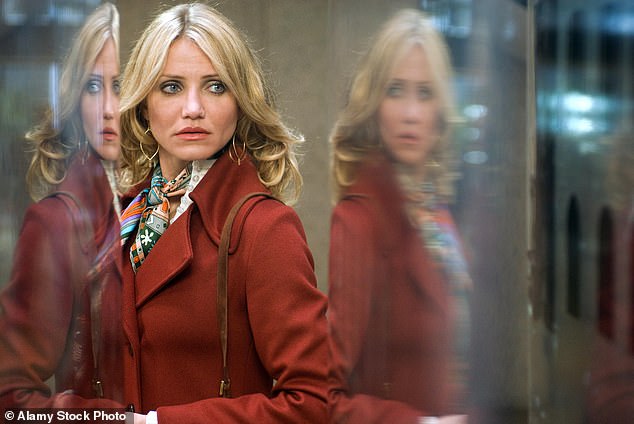 One of her last hit films: The California native seen here in the 2009 film The Box

Diaz has given us some memorable roles over the years with films like The Sweetest Thing.

But the four-time Golden Globe nominee and new mom has taken a break from acting getting married – The Bad Teacher star has since welcomed her first child, a daughter named Raddix, in December 2019 with husband Benji Madden, whom she married in 2015.

While she might be ready to grace the big screen once again in the near future, Diaz is being very particular about how she makes her return to acting.

The star ‘is enjoying her time away from the action, and spending it with her husband and baby Raddix,’ a source told ET . 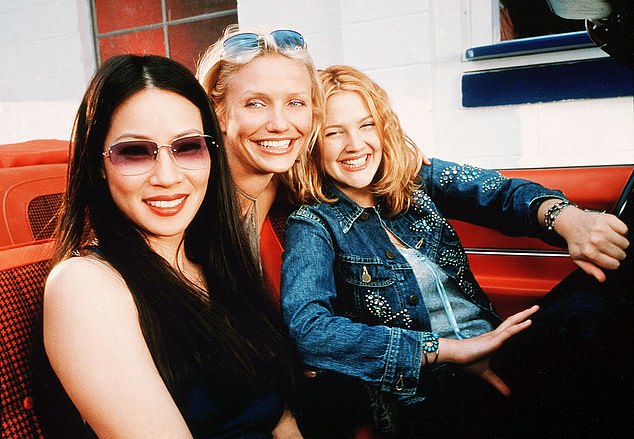 With the gals: One of her biggest hit films was 2000’s Charlie’s Angels with Lucy Liu and Drew Barrymore; Diaz is center

The insider added: ‘Cameron worked consistently for almost 20 years and needed a break.

‘Cameron loves being a mother and that is her main focus now. Cameron plans to be selective in any projects she considers for the future, but for now it’s all about family.’

She last starred alongside Jamie Foxx and Rose Byrne in the 2014 feature adaptation of Annie.

Last week it was revealed Diaz and Benji Madden have spent $14.7 million on a farmhouse in Beverly Hills.

The movie star and Benji, 41, have decided to spend an eye-watering sum on the seven-bedroom, 10-bathroom abode in the hills of west Los Angeles. Their spectacular new property sits on 1.68 acres of land and is surrounded by beautiful trees and rolling hills, according to Dirt.

She become a bit of a wine mogul thanks to her Avaline brand.

In December she released a sparkling wine. The Charlie’s Angels standout looked youthful with red lipstick and a fresh tan in an Instagram video as she thanked fans for buying her product.

‘This year it’s especially important to find joy in everyday moments. Avaline Sparkling was created to toast all the beautiful things in life that deserve to be celebrated,’ said The Mask star in a press release. 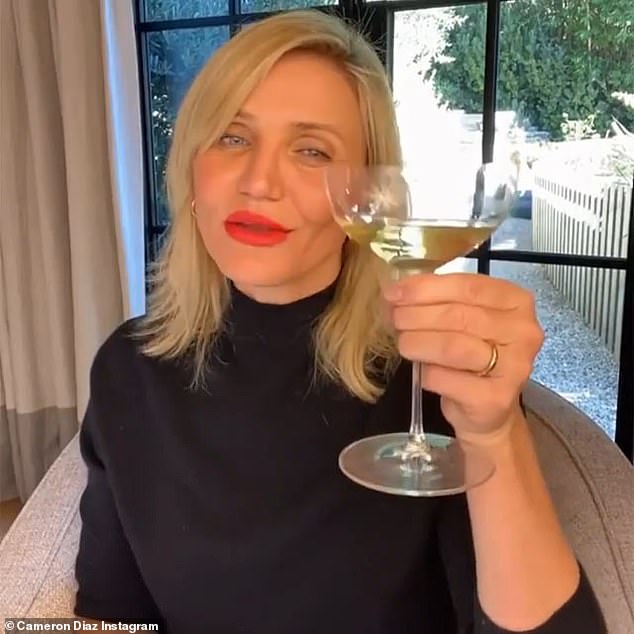 Cheers:  Diaz has become a bit of a wine mogul thanks to her Avaline brand. In Deceember she announced her company has come out with a sparkling wine

On Instagram Diaz shared: ‘From tagging your friends, to driving across state lines, and even sending your husbands to pick up a bottle on his way home from work, we would not be here without your support.’

‘Today we celebrate this community by raising a glass to you (& you & you). With big happy hearts, we Cheers To You!’

The looker was also seen in a beige sweatshirt as she uncorked a bottle of the bubbly.

‘Sparkling wine is here!!! I’ll be CHEERS-ing our @avaline community over in my stories Thank you ALL for your support, messages & comments!’ said the siren. 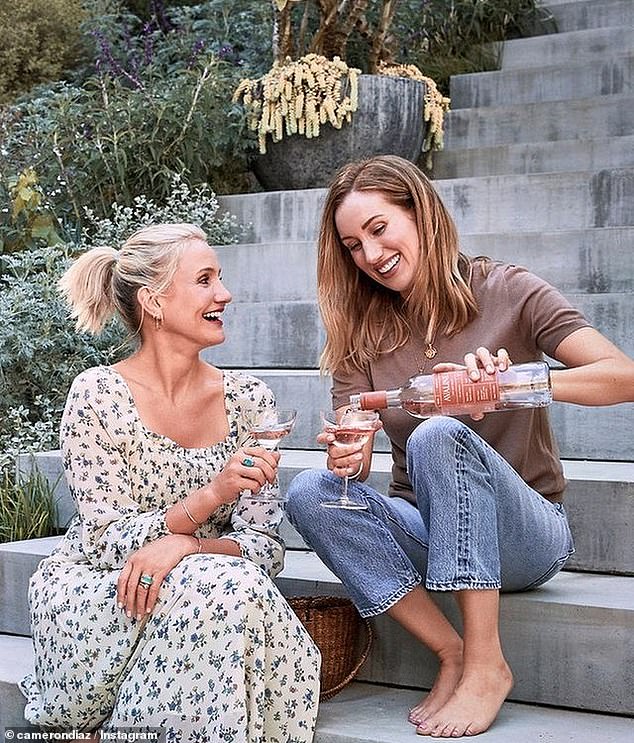 Good with a cork: ‘Sparkling wine is here!!! I’ll be CHEERS-ing our @avaline community over in my stories Thank you ALL for your support, messages & comments!’ said the siren

The release of Avaline Red joins their portfolio of vegan wines – they have a white and a rosé – made with organic grapes and without unnecessary additives.

‘Launching with a white and rosé, the wines are clean, delicious, vegan-friendly, made with organic grapes and free of unnecessary additives.

‘With ingredient transparency on each label, Avaline aims to set a new standard for the wine industry,’ boasts the press release. 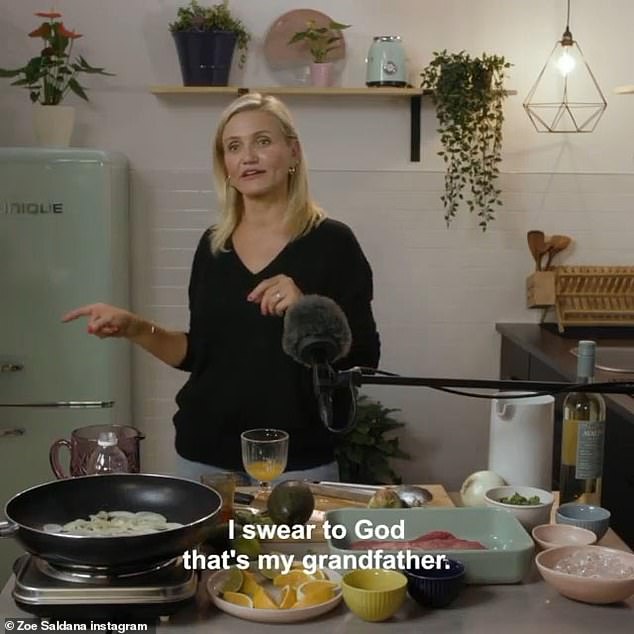