The Big Brother star, 33, said she ‘ballooned’ to 17st 4lbs and her ‘addiction’ to food left her feeling unable to leave the house for a year – adding that during the first UK lockdown she kept getting ‘bigger and bigger’.

However since her dramatic weight loss, Chanelle explained that she only eats 400 calories per meal and weighs around 10st, declaring that the surgery has ‘changed her life’ in a new interview with The Sun. 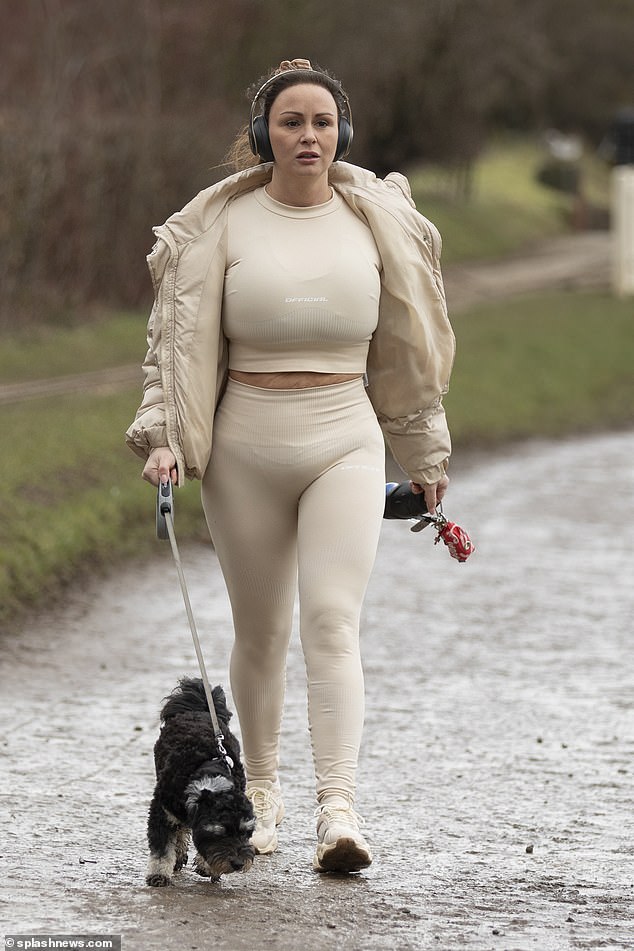 Chanelle candidly admitted that when she was a size 18 in clothes she didn’t want to do anything and ended up turning down jobs so nobody would see her.

Reflecting on how she felt, Chanelle said: ‘I didn’t speak to anyone for a year. Then lockdown happened and I kept eating because of the stress and I just ballooned and got bigger and bigger.

She says: ‘No matter how many hours I did at the gym, I was relentlessly eating and eating out of control, like some sort of weird addiction to food or something.

‘I was depressed. It gave me bad anxiety because I was always wondering what people were going to think… I was absolutely massive.’ 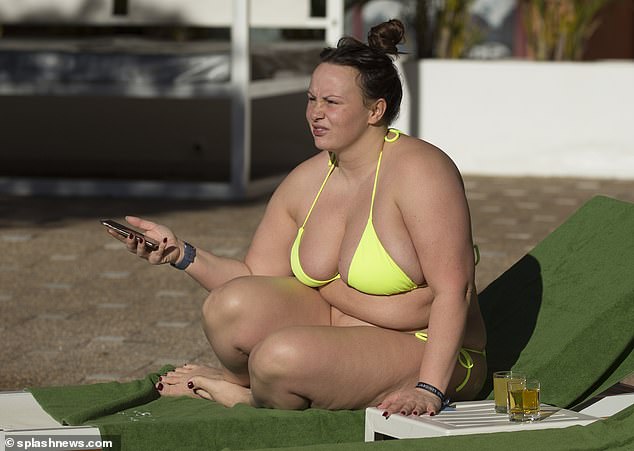 Change: The Big Brother star, 33, said she ‘ballooned’ to 17st 4lbs and her ‘addiction’ to food left her feeling unable to leave the house for a year (pictured in 2018)

Chanelle admitted the only thing that made her happy was eating, however the guilt of binging on food would make her feel ‘revolted at herself’ later.

The mother-of-two finally decided to have surgery last year after suffering from an array of health problems, including high blood pressure and struggling to walk up stairs without becoming out of breath, which were all linked to her weight.

She explained how the operation involved cutting around 80 per cent of her stomach and stapling it, meaning the size went from a ‘bag of sugar to a sausage’.

Chanelle, who is 5ft 3ins and wears a size 10 in clothing after her weight loss, said that she’s now consuming significantly less food as she feels full due to her smaller sized stomach, stopping her from over-eating. 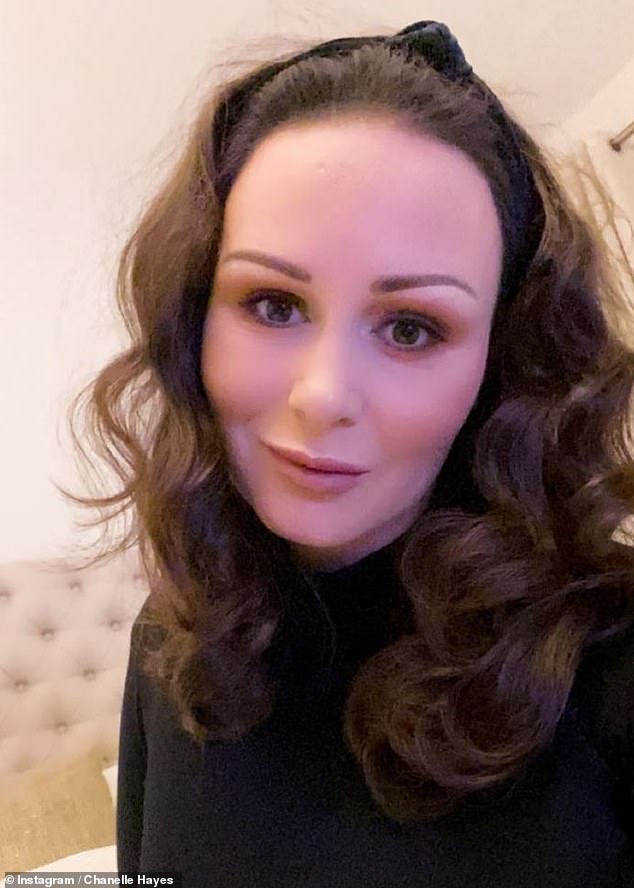 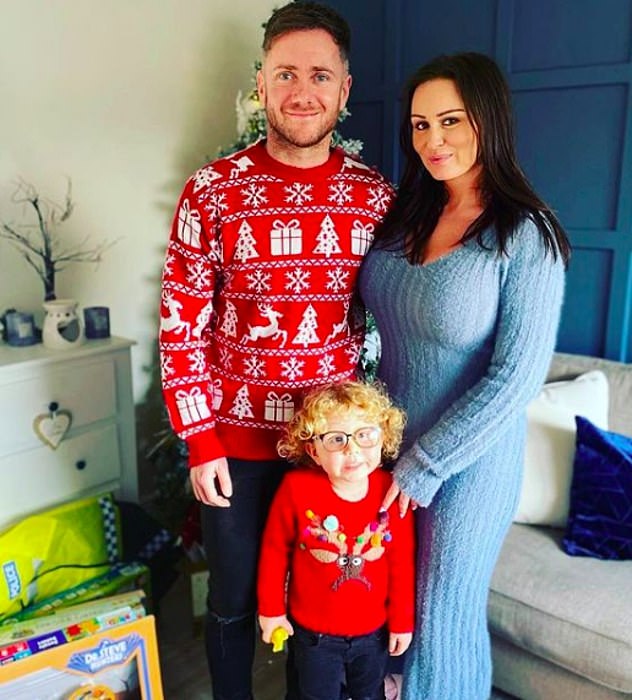 Stunning: At Christmas, Chanelle surprised fans with her trim figure as she rocked a sky blue knitted dress while posing for some festive snaps with son Frankie and ex Ryan Oates

What is a gastric sleeve operation?

The procedure, also known as sleeve gastrectomy, involves a portion of the stomach being removed to leave a smaller tube-shaped section.

Usually about 80 per cent is removed.

As some of the stomach, the person cannot eat as much as they could before and will feel full sooner.

Other weight loss surgeries include the gastric band and gastric bypass.

With a gastric band a band is placed around the stomach, so a person does not need to eat as much to feel full.

While a gastric bypass involves the top part of your stomach being joined to the small intestine, so a person feels fuller sooner and does not absorb as many calories from food.

Sources: NHS and The Mayo Clinic

The reality star, who is planning to quit fame and focus on her nursing training, also reflected on how the operation has made her happier as well as thinner.

She told the publication that she’s feeling better mentally and that the operation has completely ‘changed her life’.

Chanelle added that she wanted to speak openly about her surgery to help others who might think it’s taboo to talk about and show it’s not always a bad option.

The star had stunned fans with her impressive weight loss as she shared snaps from her festive celebrations to Instagram on Christmas Day.

She looked sensational as she flaunted her figure in a sky blue dress and enjoyed the festive celebrations with her sons Blakely, ten, and Frankie, three and ex Ryan Oates. 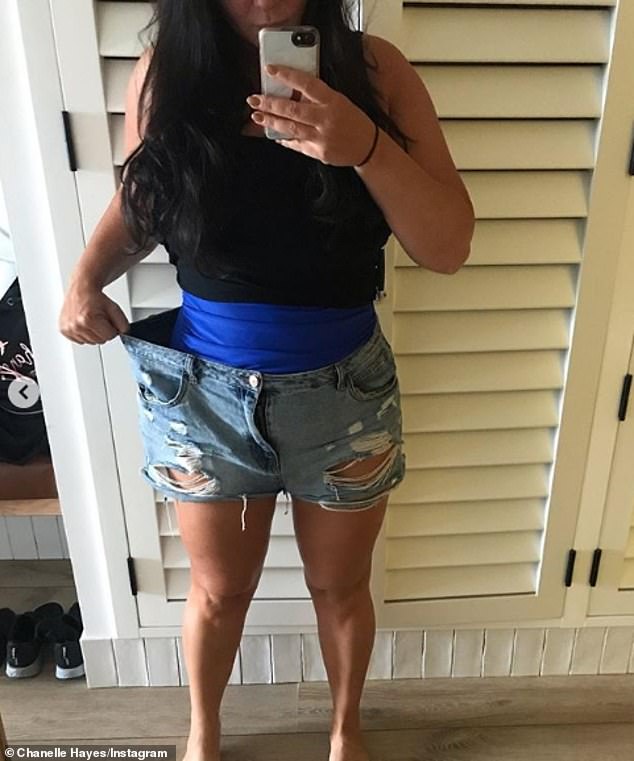 Weight loss: Chanelle took to her Instagram in 2019 to show off her slimmed-down frame in a pair of old shorts, which are now too big for her

And last March, Chanelle opened up about her fluctuating weight and admitted that she underwent a hair transplant after years of yo-yo dieting left her balding.

She explained: ‘I always hated my forehead, but my weight gain and loss has really receded my hairline and thinned out my hair. Gaining weight also changed my face.’

Back in 2016, Chanelle revealed she was suffering with severe hair loss, as her weight fluctuated between 14 stone and seven stone over the span of two years.

Chanelle has been on a health kick since last year when she revealed she had gone up a dress size after eating badly for six weeks, and also from the challenges of becoming a mum.

The star, who first shot to fame in 2007 as a feisty 19-year-old contestant on Big Brother also appeared on This Morning in And in January 2019 where she admitted that she battles with staying in shape alongside motherhood.

Chanelle said: ‘I am trying really hard to diet, and it is hard, especially with two kids on my own and trying to earn a living…

‘I’ve got the will power of a sloth I’ve really struggled, what’s hurtful is when people say to me, I got a message saying you know you can be slim AND be a mum. They’re still being said they could say it to anybody, sometimes it really does hit a nerve.’

Chanelle shares son Frankie with her ex Ryan, and the couple separated in August 2017 after she claimed he walked out on her three months after welcoming their son.

The duo were said to have rekindled their romance just months later but later split for good in 2019. On Valentine’s Day she shared snaps with a mystery man.

She also had a whirlwind romance with footballer manager Matthew, 34, in 2010 before they parted ways when she was only three months pregnant with Blakely. 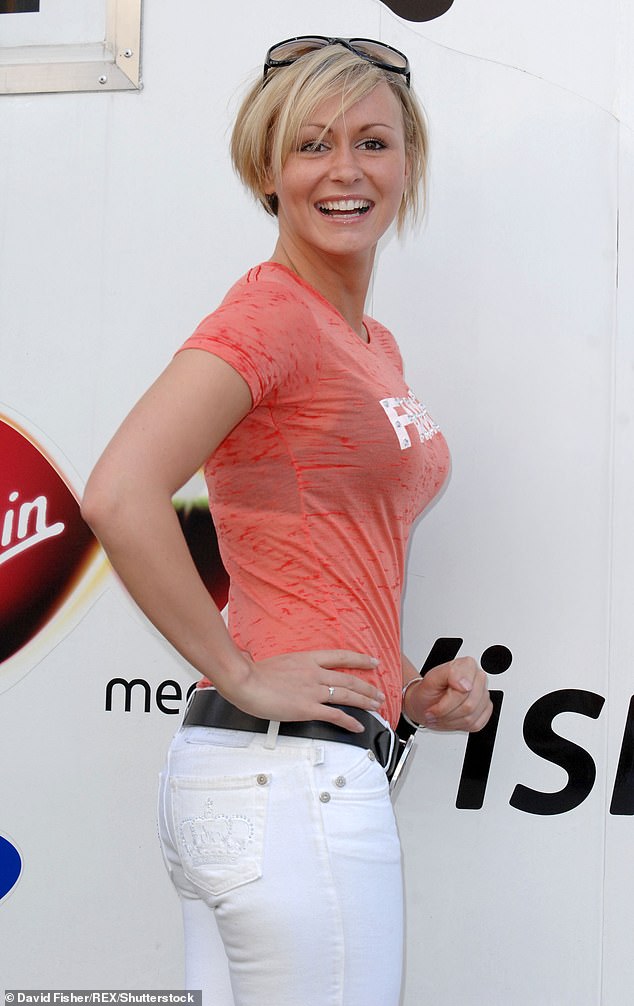 Throwback: The star shot to fame in 2007 as a feisty 19-year-old contestant on Big Brother