Chloe Ferry has revealed she’s selling her spacious home in Newcastle just a year after moving in and redecorating.

The Geordie Shore star, 25, had purchased the three-bedroom home, which boasts its own hot tub and bar, in February 2020 after her split from Sam Gowland.

Taking to Instagram on Saturday, Chloe gave fans a quick tour of the stylish abode showing off its marble bathrooms and open plan living area. 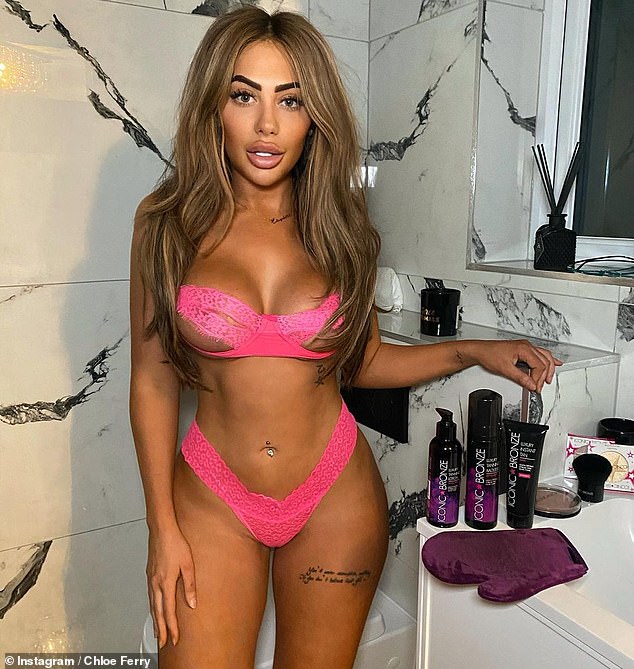 On the move: Chloe Ferry has revealed she’s selling her spacious home in Newcastle just a year after moving in and redecorating (pictured in her marble ensuite bathroom)

Starting with the upstairs, Chloe showcased her marble ensuite bathroom and large bedroom with a huge bed covered in black and white pillows.

She then moved onto the main bathroom which matched the white and grey theme and had an impressive bath.

The star then flaunted her dressing room, complete with pink velvet chairs and her own stand-up tanning booth.

Making sure to show off all of her home, Chloe also shared a few clips of the stylish open plan downstairs space. 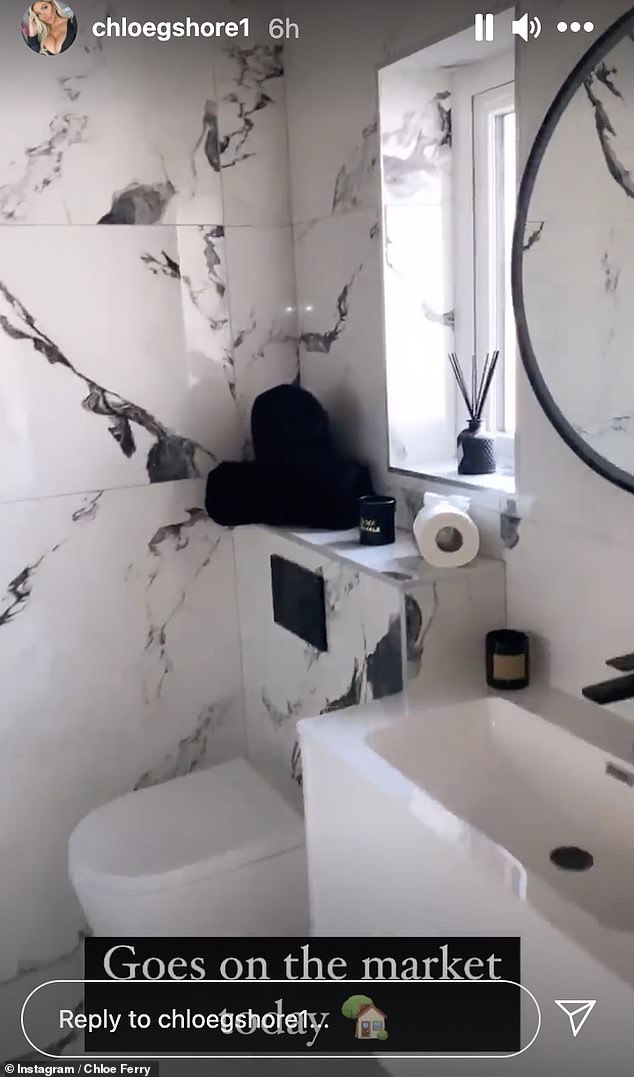 Going on the market: The Geordie Shore star, 24, gave fans a tour of her abode on Instagram Stories on Saturday, showing off its modern bathroom which boasted a light-up touch mirror

As well as having a small bar area, the living room boasted a plush grey sofa and led into the garden where more seating and a hot tub could be seen.

Last September, Chloe revealed she was making her home available to rent instead of permanently parting with it when she moves to London.

She said: ‘I have decided that I am going to move out of my house, so it is going to go on the market for rent. If anyone is interested then get your offers in!

‘Just joking, but yeah my house is going on the market for rent… i’ve just moved into it as well.’ 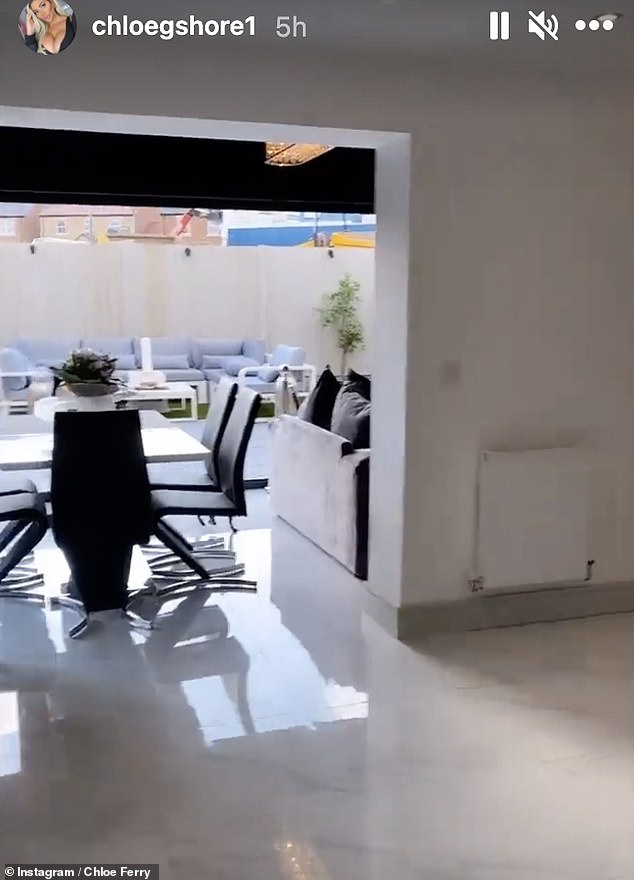 Spacious: The downstairs of the home was all open plan with doors opening into the garden

However it now seems that she’s taken the plunge and will be waving goodbye to the modern house after just a year.

Chloe moved into the space and started adding some fresh decorative touches in February 2020 after moving out of the place she shared with her ex Sam Gowland.

Since then Chloe has turned her house into a stunning pad, adding her own cinema and games room as well as a stylish outdoor space.

Speaking about her home when she first moved in, Chloe said: ‘What I really like about the house is it’s got a lot of space when you walk in. I like the big rooms.’ 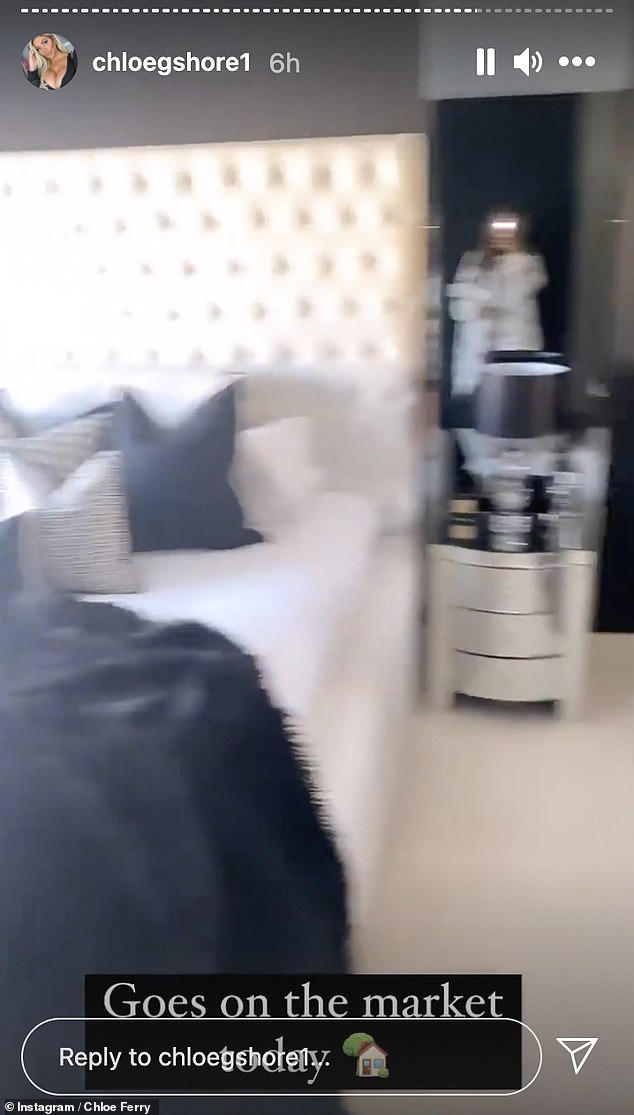 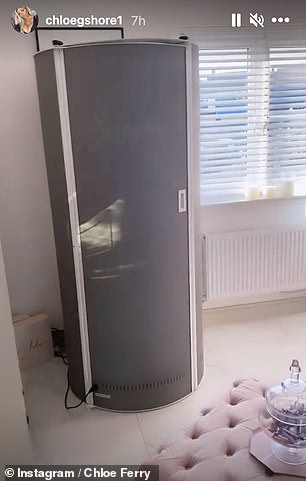 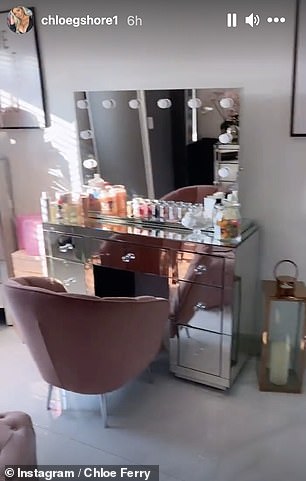 Pamper space: The beauty also showed off her dressing room which boasted a stand-up tanning booth (left) and a silver dressing table (right) with a pink velvet chair 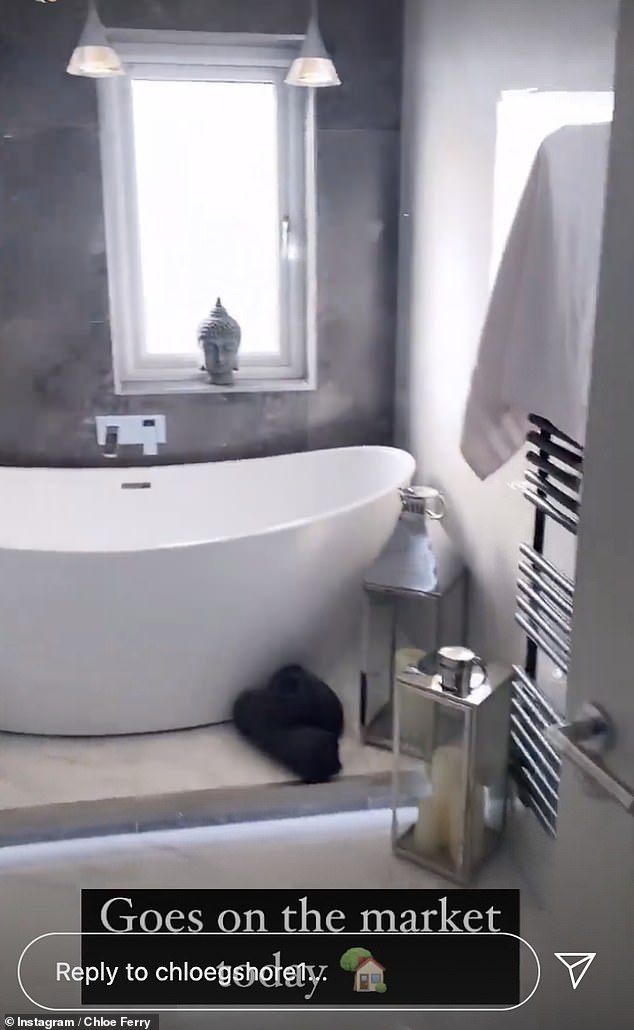 Very on trend: Another bathroom in the property boasted a statement tub and grey wall 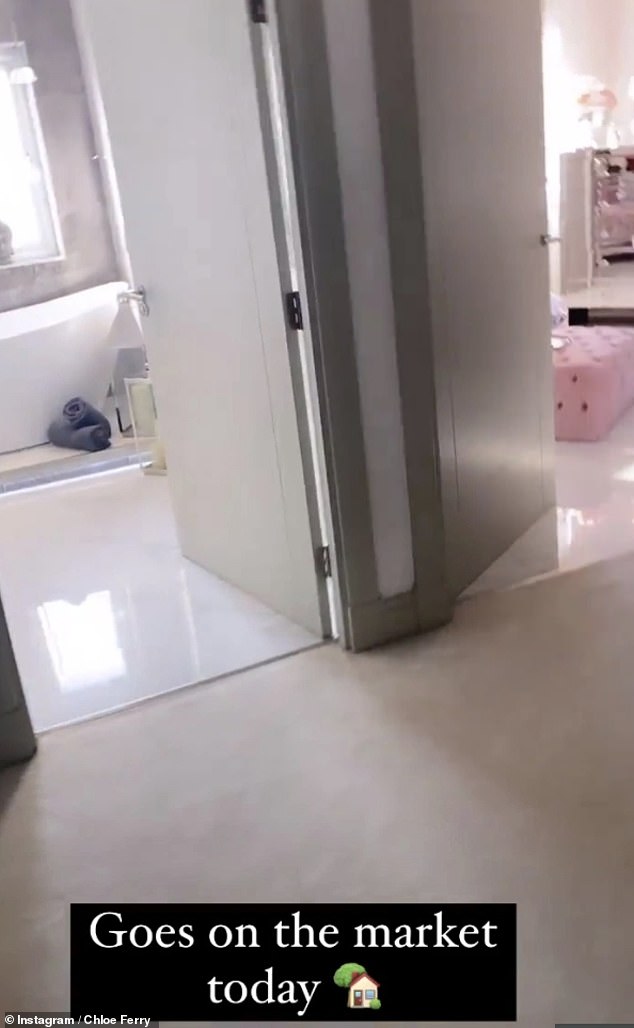 Heading out: Chloe only moved into the three-bedroom home in Newcastle last Febraury

During a series of videos shared to Instagram at the time the blonde beauty walked through the house before it was decorated.

She explained how she was hoping to transform the home into a stylish space and put down new carpets.

In February, Chloe and Wayne, 57, tricked fans into believing they were set to tie the knot as they staged an engagement photo – with Chloe flashing a huge diamond on her ring finger.

However, last Thursday, she excitedly flashed her ring-free finger after it was revealed her ‘engagement’ to her Celebs Go Dating co-star was fake. 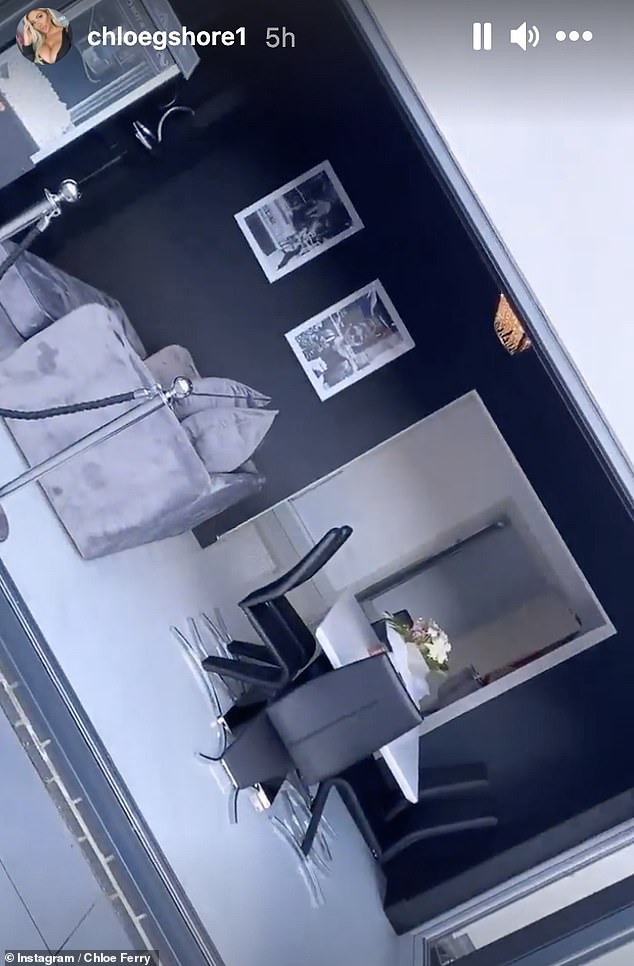 So much room: The reality star opened up the doors as she gave a short tour of the house 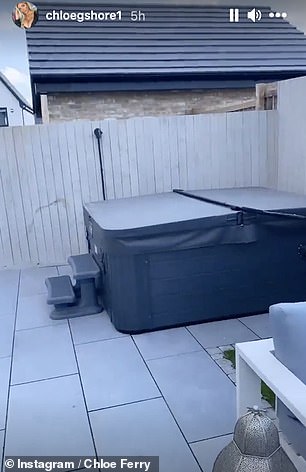 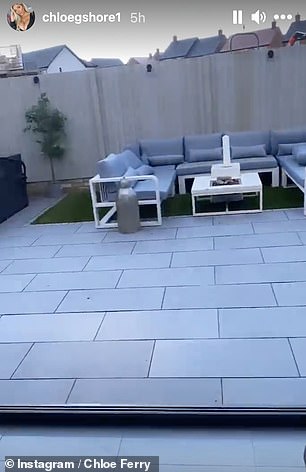 Luxury: A hot tub (left) and spacious seating area (right) could be seen in the lovely garden 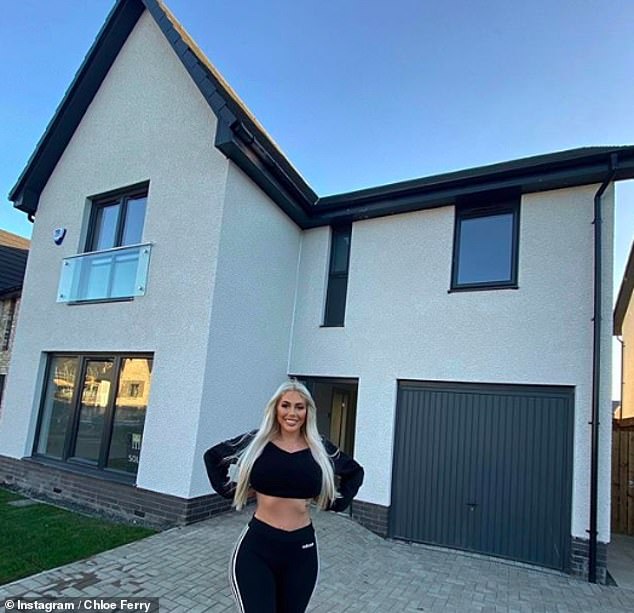 Moving on: Chloe announced she’d be renting out her home back in September, however it seems she’s now ready to wave goodbye to her home forever

Chloe was seen without the ring soon after one of Wayne’s pals confirmed the whole thing was a ‘wind up’ and claimed that Wayne is a ‘joker’.

They told The Sun: ‘Wayne is a real joker and this is exactly his kind of humour.

‘He’s told people it was just a wind up over text. He and Chloe are definitely not engaged.

They added: ‘They got on really well when they met in Celebs Go Dating and will be mates for life.’

Wayne and Chloe formed a close friendship during filming of the latest series of Celebs Go Dating.

The younger brother of football Gary Lineker, 60, has caused quite a stir for starring in the show and saying how he wanted to date someone around 28 or 29-years-old. 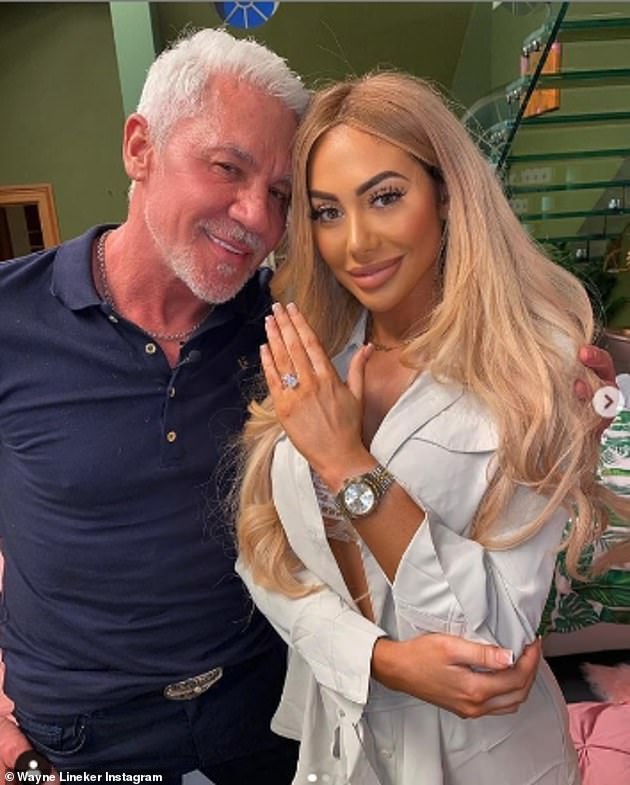 Hoax: It comes after the reality star, 25, and Wayne, Lineker 57, tricked fans into believing they were set to tie the knot as they staged an engagement photo 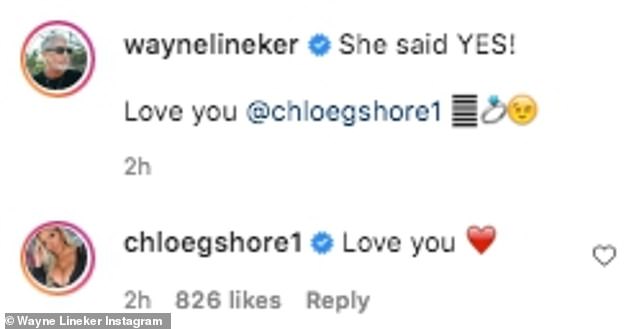 Engaged? Chloe was seen without the ring soon after one of Wayne’s pals confirmed the whole thing was a ‘wind up’ and claimed that Wayne is a ‘joker’