Chrissy Teigen underwent endometriosis surgery on Thursday and is having a harder recovery than expected.

The 35-year-old Cravings founder had surgery to alleviate pelvic pain caused from the disorder where the uterine tissue lining incorrectly grows outside the uterus instead, calling the recuperation process a ‘toughie.’

A bit loopy while providing a status updated on Twitter and Instagram, she said that despite being in pain it was ‘truly still better than contractions and pain from endo.’ 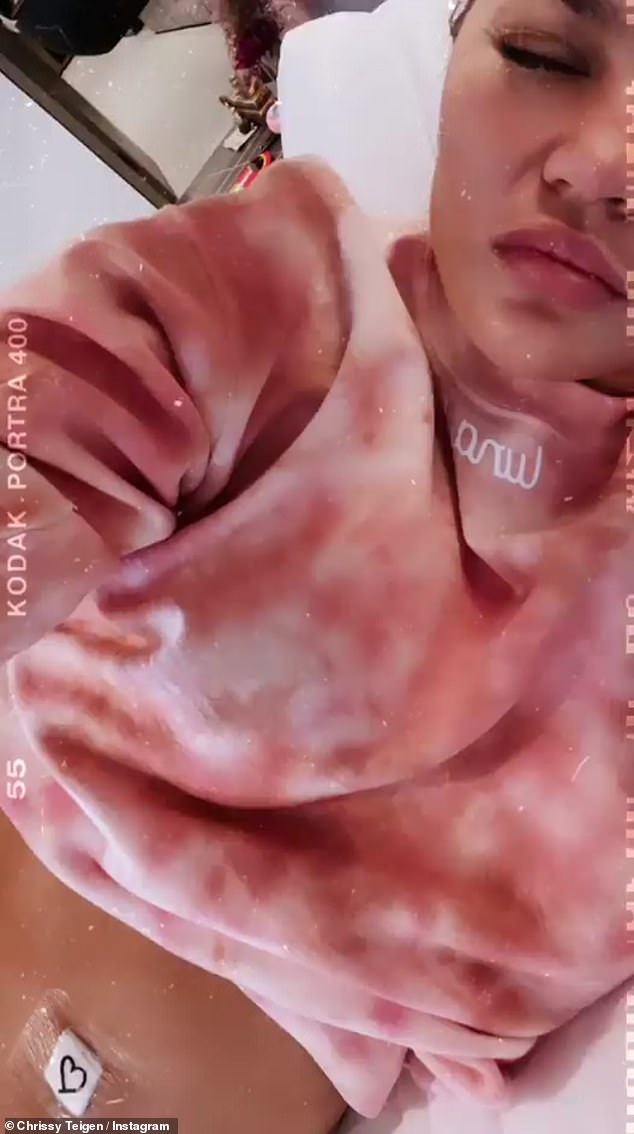 Tough recovery: Chrissy Teigen, 35, is having a tough recovery after undergoing endometriosis surgery on Thursday, but maintains that it’s better than ‘pain from endo’

A worn out Teigen laid in the comfort of her own home in sweats as she said ‘I’m OK, I’m all numbed up,’ while showing off her abdomen scars that were covered with gauze covered in hearts.

She indulged in some classic comforts including a big old box of donuts and some binge worthy television including 90 Day Fiance and Curb Your Enthusiasm.

A bit disoriented she said, ‘Usually I’m really good after [surgery], this one’s a toughie. My belly got numbed. It’s gonna be numbed for a couple of the next days, hopefully it’ll stay that way. Every little cough makes it hard.’

Teigen maintained that she would rather cope with a painful recovery despite acknowledging ‘tomorrow’s gonna be worse’. 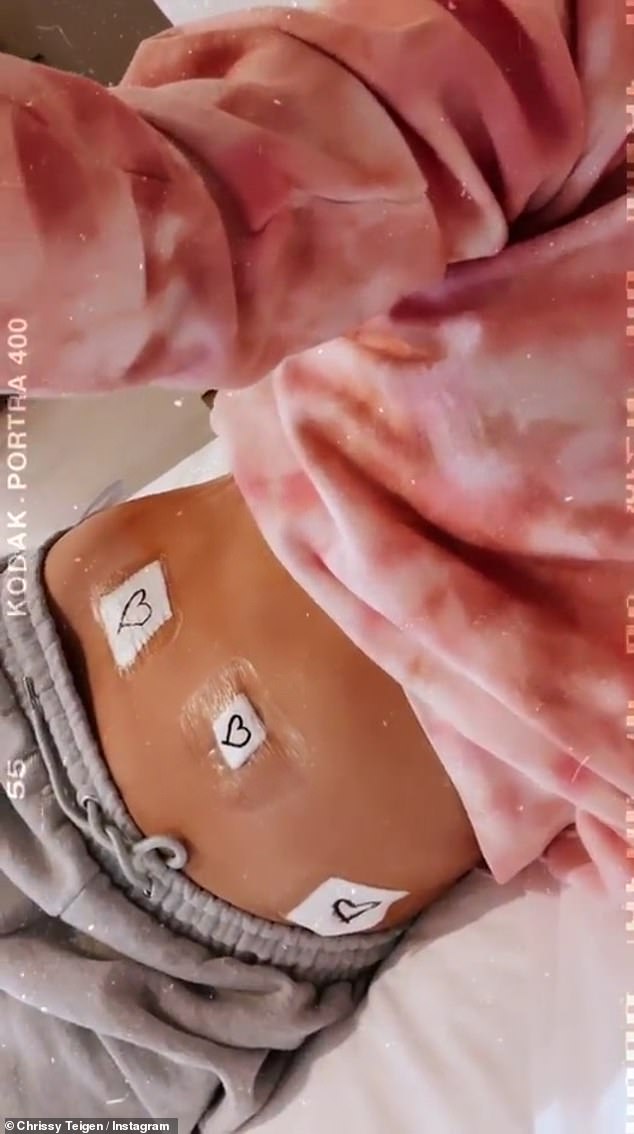 Rest up: ‘Usually I’m really good after [surgery], this one’s a toughie. My belly got numbed. It’s gonna be numbed for a couple of the next days,’ she told her followers

Simple comforts: She tried to make herself feel better by eating donuts and watching binge-worthy television 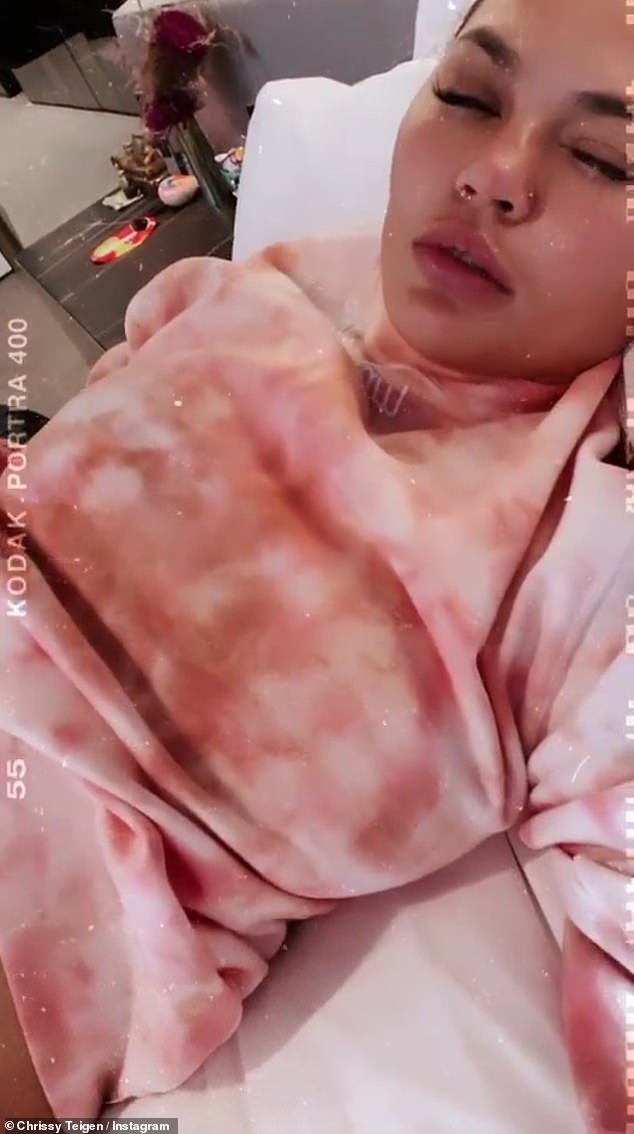 Not feeling so hot: She asked for advice  on surgery the day before as she realized her recovery was a lot worse than expected

The previous endometriosis pain she had felt was tough for many reasons, as she said her period cramps felt like ‘baby kicks’ just a day before she had surgery, which triggered memories of her miscarriage.

Suffering a tragic miscarriage with her baby boy ‘Jack’ in September, the wife of John Legend said the ‘kicks in her belly’ were not ‘phantom,’ while sharing that the baby would have been born this week.

Some pre-surgery jitters, she asked her followers on Wednesday, ‘Can anyone tell me their experience after endometriosis surgery? what is the recovery-difficult level? like can I make soup after?’

On Thursday evening, she provided an update as she shared a video of her lying in  bed and said ‘an update: holy s**t it’s a no on the soup but a go on the Curb.’

Gearing up: She shared that her period had been especially bad with pelvic pain that felt like baby kicks in her stomach, only making the pain of miscarrying her son Jack who would have been born this week more painful 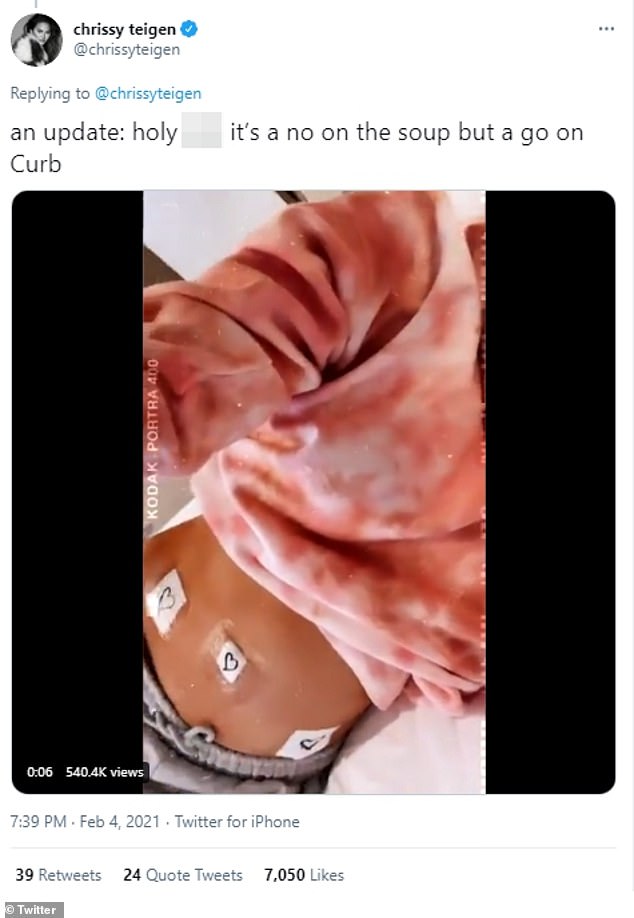 No soup: Not feeling strong enough to make soup based on her level of pain she laid in bed and watched Curb instead 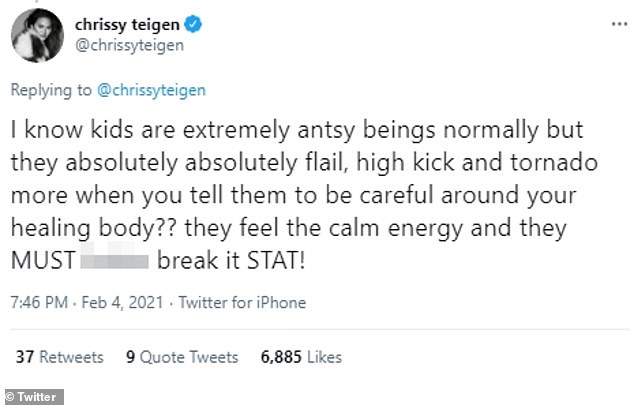 No peace and quiet: Teigen revealed that kids Mile and Luna who she shares with Legend were being especially antsy as she said she wished they would respect her ‘healing body’

She continued to say that her kids Luna, four, and Miles, two, were driving her mad as she tweeted:

‘I know kids are extremely antsy beings normally but they absolutely absolutely flail, high kick and tornado more when you tell them to be careful around your healing body?? they feel the calm energy and they MUST f***in break it STAT!’

Right before entering surgery she shared a hospital selfie and wrote ‘Please ‘endo’ this pain LOL!’

She had shared videos of her belly contracting on Twitter days prior while talking about the pain of losing Jack due to a ‘partial placental abruption.’ 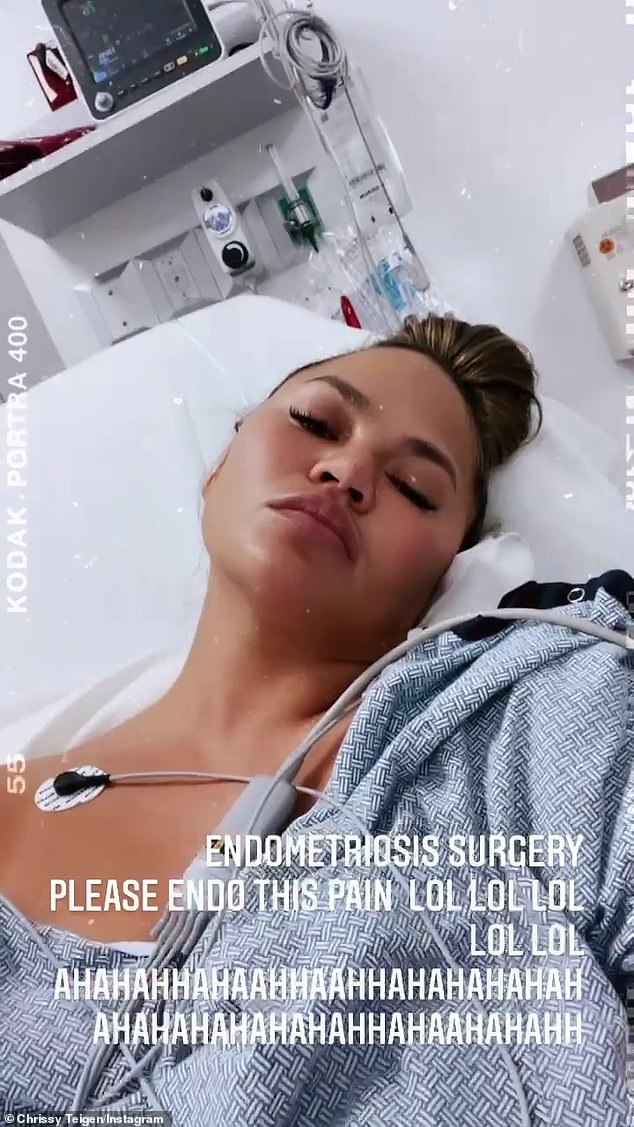 Chrissy’s Court star Teigen Instastoried a snap of herself in the hospital on Thursday ahead of her endometriosis surgery, which she captioned: ‘Please ‘endo’ this pain LOL!’ 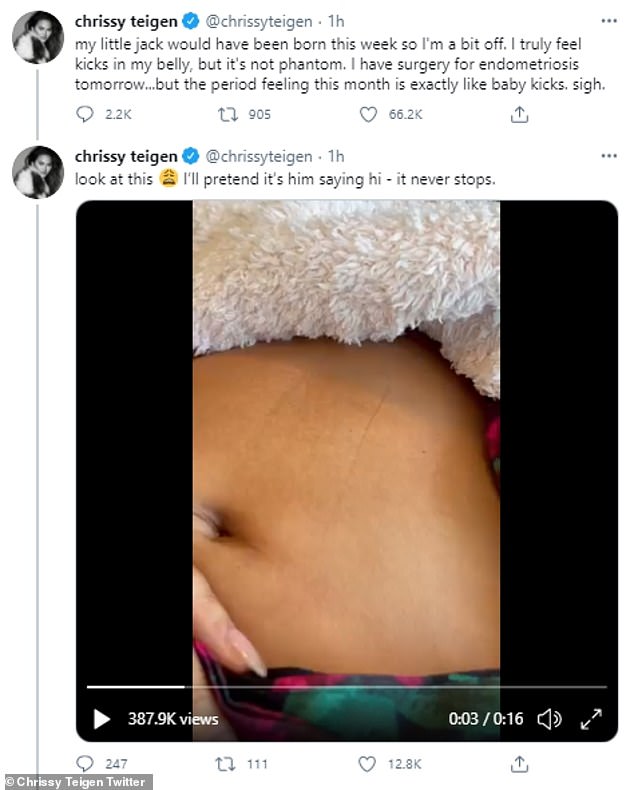 Kicks: ‘Look at this. I’ll pretend it’s him saying hi – it never stops’ she wrote

‘Look at this. I’ll pretend it’s him saying hi – it never stops.’

The Utah native revealed the loss boldy on Instagram as she shared photos of she and John cradling a blanket and crying in September.

To cope with the loss she has embarked on sobriety, sought grief counseling and therapy and even picked up horseback riding as a form of therapy.

‘My therapist says I need something that I do for just me, as I have absolutely nothing currently lol,’ she tweeted last month.’

She shared videos from Legend’s Wild video shoot late Thursday- which they used as a pregnancy announcement – as she penned a heartfelt caption. 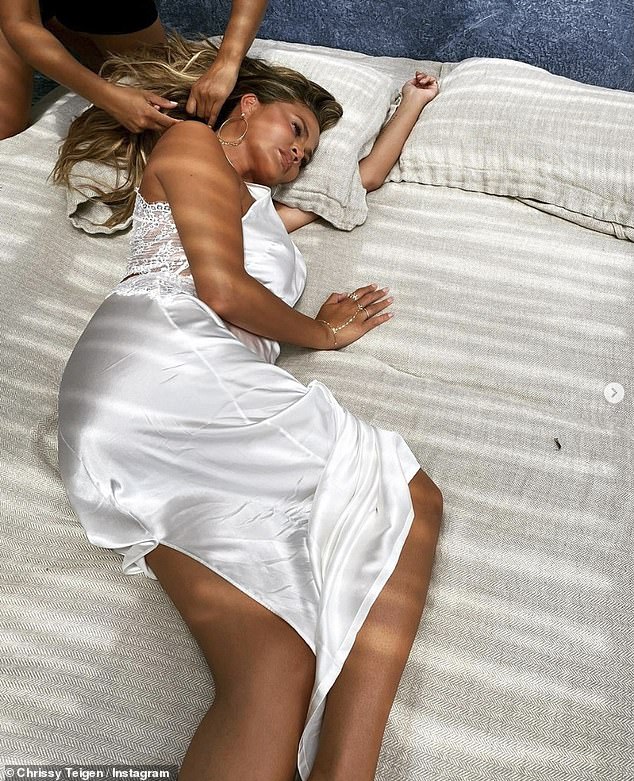 Big reveal: Teigen and Legend revealed the news of her pregnancy in his music video for Wild, now sharing that she can’t look at the photos without sobbing after losing her son who would have been here this week

‘I was 10 weeks along and out of my mind happy. I knew the video would take a bit to get together so thought it would be cute to share our news with the world through the ol classic hand on belly trick at the end. I could have never imagined what would happen over the next 10 weeks…not sure I’ll ever be able to watch that video again without sobbing but I hope he feels my tears and knows we miss him so.’

‘He would have been here any day now – if he were like Luna and Miles, I’d probably be holding him as we speak. I am so full of regret that I didn’t look at his face when he was born. I was so scared of seeing him in my nightmares that I forgot about seeing him in my dreams. I hurt every day from that remorse.’

‘This month is a rough reminder and to be honest, I thought the worst was over but I guess life and emotions aren’t on any sort of schedule. Love you guys to pieces and am grateful for all your support and love. I firmly believe energy and healing travels through the night sky and I feel it, I promise I do. and I love you jack. I miss you so so much.’ 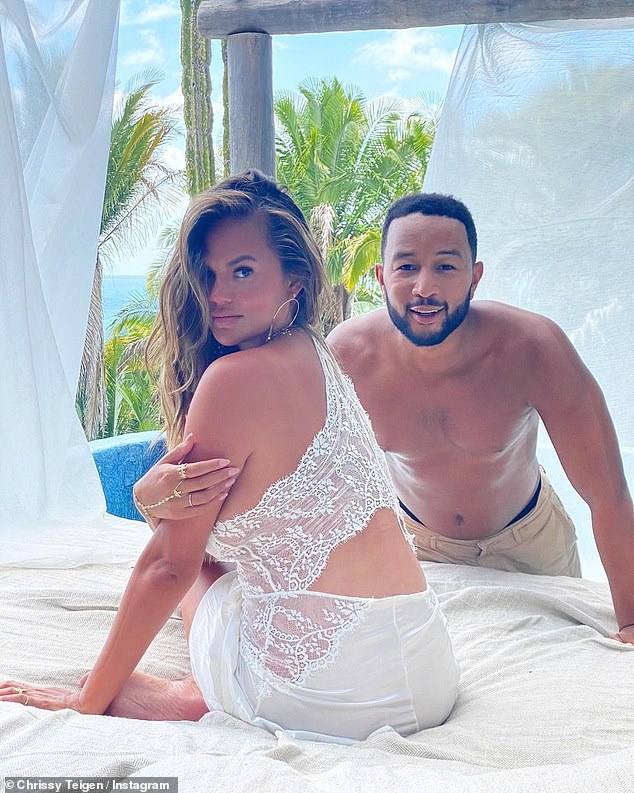 Fluctuating emotions: She lost the baby due to partial placental abruption while he was four months in utero