Rapper Dan Sur has become an internet sensation after showing off his implanted golden locks on his various social media outlets.

The 23-year-old reggaeton artist has taken to his Instagram and TikTok accounts to flaunt his numerous chains, which have replaced his natural hair, to his rapidly rising following.

The rapper, who is originally from Mexico, previously kept his black locks long and stylized before switching them out for his eye-catching new look. 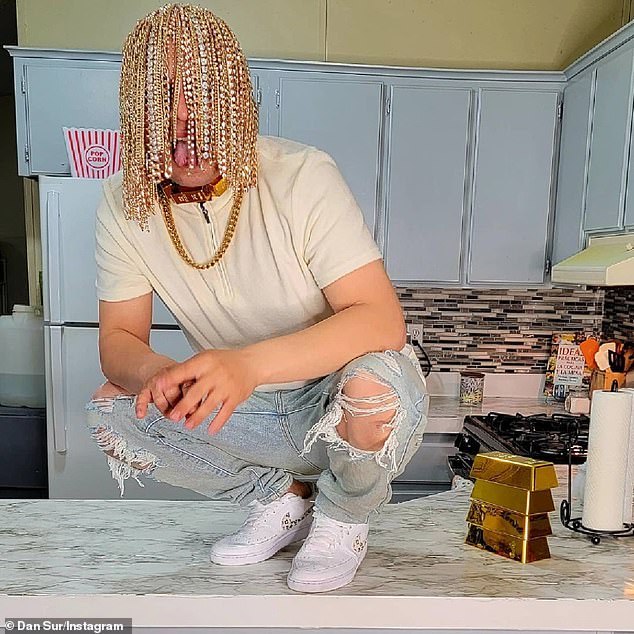 Standing out: Rapper Dan Sur has exploded on social media after becoming well known for his implanted golden locks

In one of his videos, Sur noted that he was interested in forging his own path in the rap world, which led him to undergo the procedure.

‘The truth is that I wanted to do something different because I see that everyone dyes their hair. I hope not everyone copies me now,’ he said.

The performer then explained how he had the chains attached to his head, noting that he spared no expense in the process.

‘I have it as a hook that is implanted in my head and that hook has hooks and they are all hooked in my skull, under my skin,’ he said. 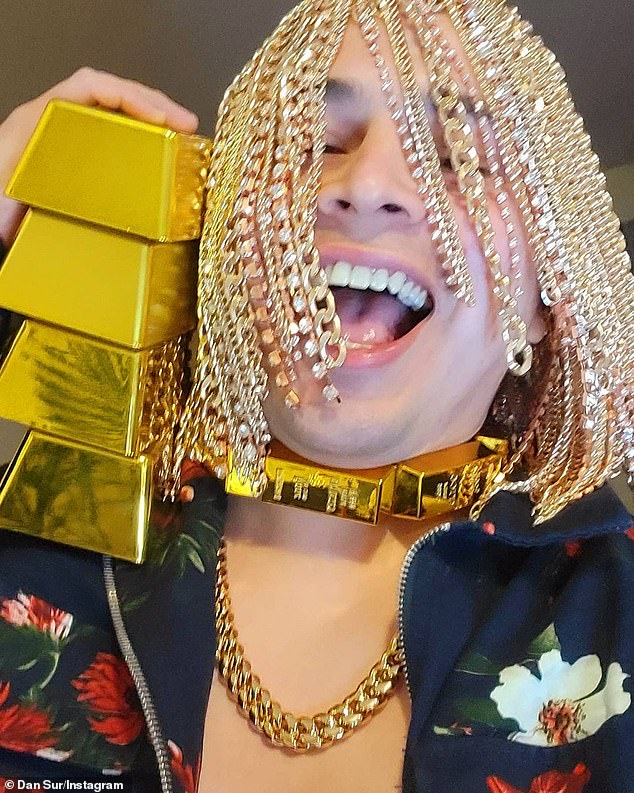 Not playing around: The Mexican performer noted that his numerous golden chains were ‘all hooked in my skull, under my skin’

Sur went on to claim that he had become the first and only musical artist to have undergone the procedure to date.

‘This is my hair. Golden hair. The first rapper to have gold hair implanted in human history,’ he expressed.

In a later post, he took a shot at several other performers who opted to dye their locks, a stylistic choice that was pioneered by the controversial figure Takashi 6ix9ine.

‘I don’t paint my hair like all these Takashi clones,’ he wrote in its caption. 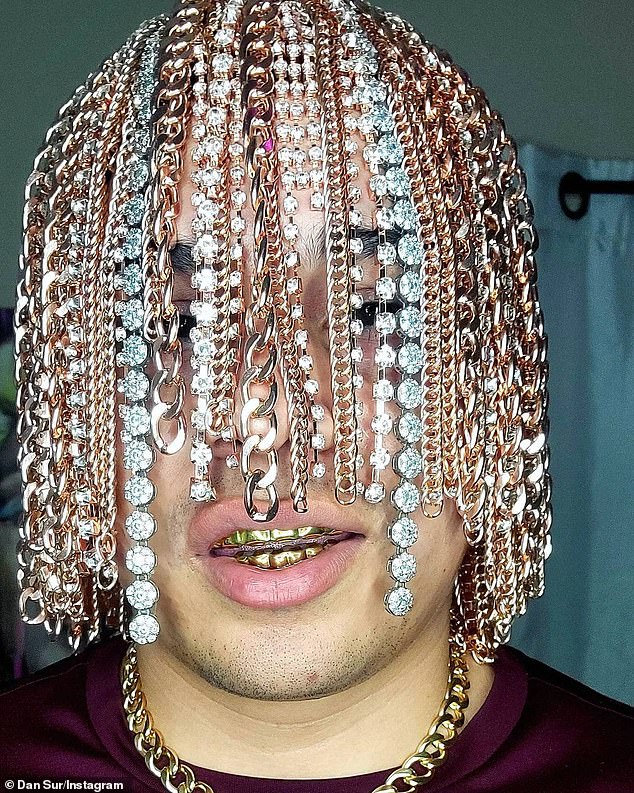 Laying claim: The reggaeton artist described himself as the ‘first rapper to have gold hair implanted in human history’

Sur has also added numerous other pieces of jewelry to his collection, as he is often seen wearing a set of bejeweled grills, which he brushed with toothpaste in a TikTok video.

The performer also showcases a necklace made in the shape of several connected bars of gold in his other posts.

Prior to receiving his golden implants, the rapper sported much more conventional hairstyles, which are seen in his earlier posts.

At one point, his black hair was tied into partially dyed locks that he often tied up. 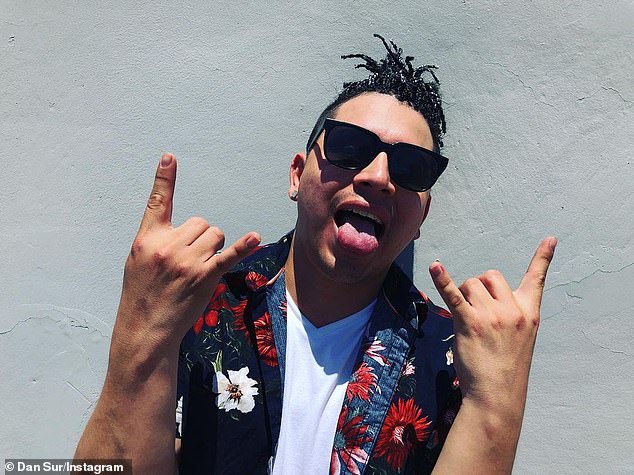 In the past: Sur previously styled his hair into several braids that he would often tie up 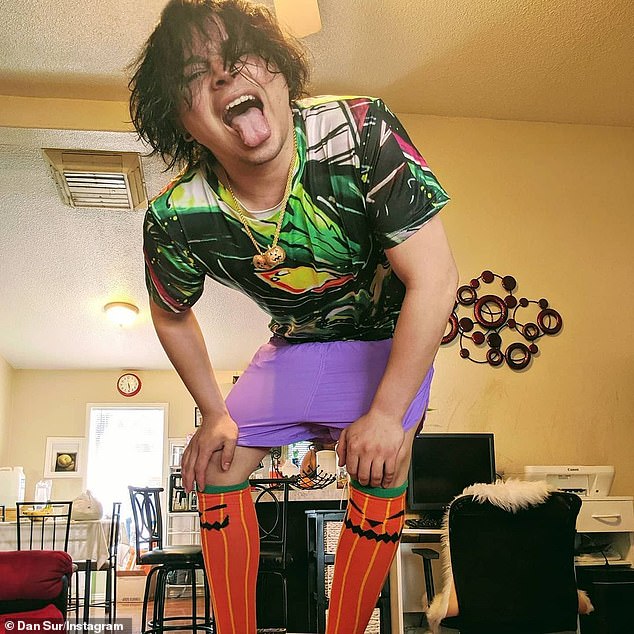 Wild style: He later changed his look and let his lengthy black locks flow freely before receiving his implants

In 2020, Sur opted to let his hair grow long and flow freely around his head.

The rapper currently boasts 36,600 followers on Instagram and a much more impressive count of 1.9 million on TikTok.

Sur’s most recent music video, entitled Oro, which translates to Gold in English, was shared to his YouTube account earlier this week. 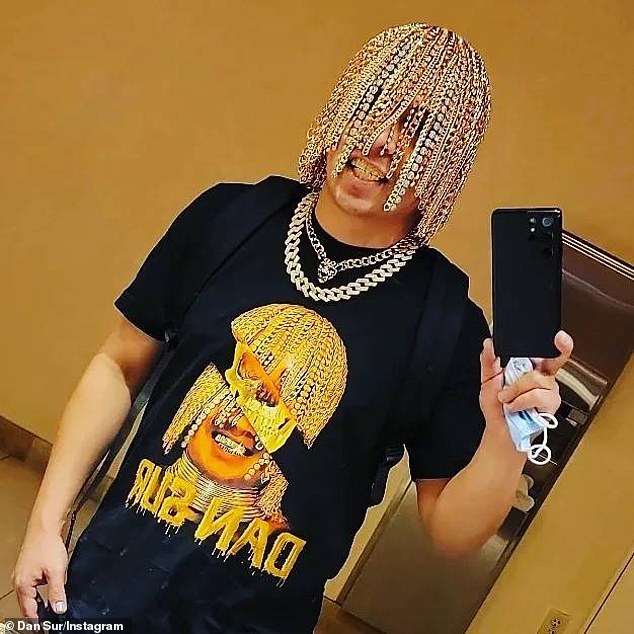 Gaining traction: The performer currently has 36,600 followers on Instagram and 1.9 million on TikTok