Demi Lovato opened up about their journey coming out as non-binary during a chat with Jane Fonda, after a lifetime of adhering to the expectations of the patriarchy.

Just two weeks after announcing their switch to they/them pronouns in a video posted to Twitter, Lovato reflected on why they were hesitant to tell the world they do not identify as a woman or man.

‘After years of living my life for other people, trying to make myself smaller for the patriarchy, they run the industry, they are at the center of everything,’ the 28-year-old Sorry Not Sorry singer on Fonda’s weekly show, Fire Drill Fridays. 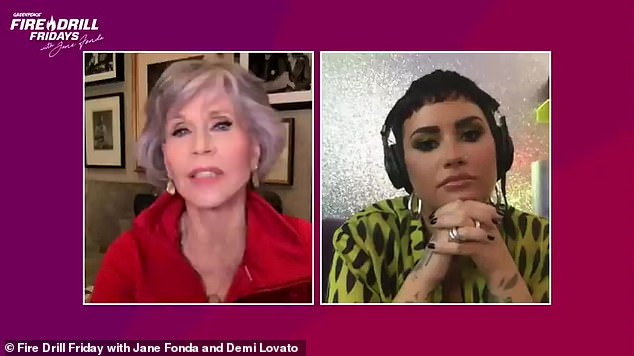 Candid conversation: Demi Lovato opened up about their journey coming out as non-binary during a chat with Jane Fonda, after a lifetime of adhering to the expectations of the patriarchy

‘That didn’t vibe for me because I’m too outspoken for that,’ they added.

Lovato also urged fans to ‘find more compassion’ and ’empathy for others.’ 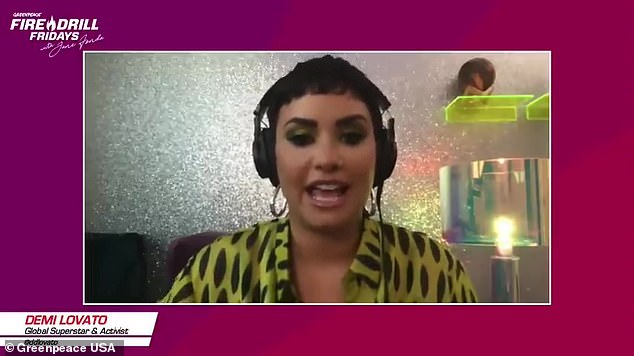 Out and proud: Just two weeks after announcing announcing their gender identity and switch to they/them pronouns in a video posted to Twitter, Lovato reflected on why they were hesitant to tell the world they does not identify as a woman or man

‘If you’re having a hard time finding that towards others, go within yourself, find it within yourself so you can find it for others because that’s what will bring us together is that unity,’ they stated.

Lovato continued: ‘Remembering that even though we are individuals, we are one, and when we start excluding people, that’s when things get really hateful and dangerous.’

They first came out as non-binary on their podcast 4D with Demi Lovato, earlier this month. 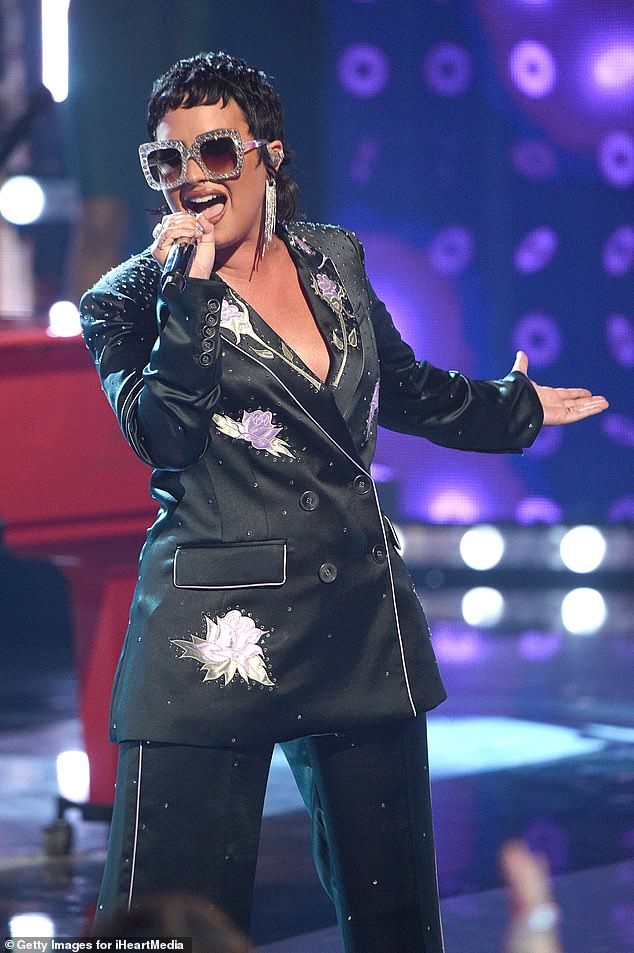 ‘After years of living my life for other people, trying to make myself smaller for the patriarchy, they run the industry, they are at the center of everything,’ the 28-year-old Sober singer on Fonda’s weekly show, Fire Drill Fridays

The Camp Rock alum, who identifies as pansexual, said that they don’t want to be seen as an ‘expert or spokesperson,’ and has ‘opened up another level of vulnerability’ by sharing the news with their fans.

Lovato shared the clip revealing their new identification with fans alongside a lengthy Twitter thread, to mark the launch of their podcast series.

In the video, they said: ‘I want to take this moment to share something very personal with you 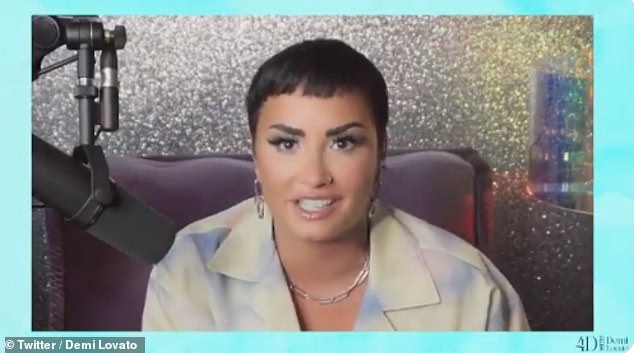 ‘I’ve been doing some healing and self-reflective work’:  Lovato came out as non-binary and has changed pronouns to they/them in a video shared with fans earlier this month

‘Over the past year-and-a-half I’ve been doing some healing and self-reflective work, and through this work I’ve had the revelation that I identify as non-binary.

‘With that said, I’ll be officially changing my pronouns to they/them. I feel that this best represents the fluidity I feel in my gender expression and allows me to feel most authentic and true to the person I both know I am and still am discovering.’

‘I want to make it clear I’m still learning and coming into myself – I don’t claim to be an expert or a spokesperson.’ 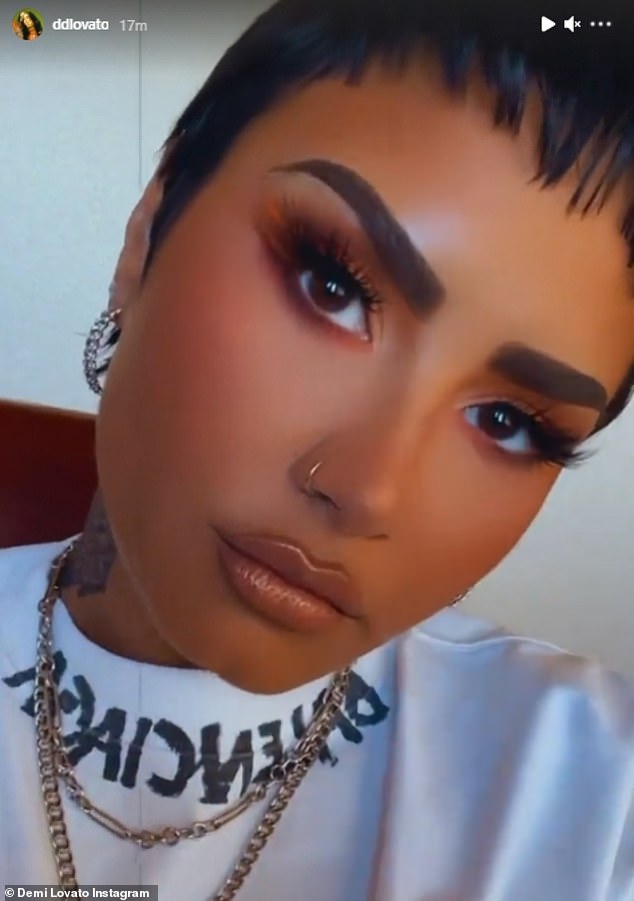 Candid: The singer shared the news with fans alongside a lengthy Twitter thread, writing that sharing their new identity has ‘opened up another level of vulnerability’

Lovato went onto encourage fans to ‘keep living in your truths,’ and sent ‘so much love’ to those who are still struggling to come to terms with their identity.

In a Twitter thread to accompany the video, the star added: ‘Every day we wake up, we are given another opportunity & chance to be who we want and wish to be.

‘I’ve spent the majority of my life growing in front of all of you… you’ve seen the good, the bad, & everything in between. 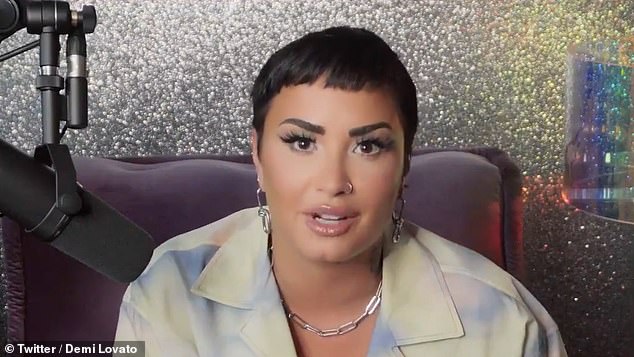 Important: Demi announced their new gender identity in a video to mark the launch of their new podcast series 4D With Demi Lovato 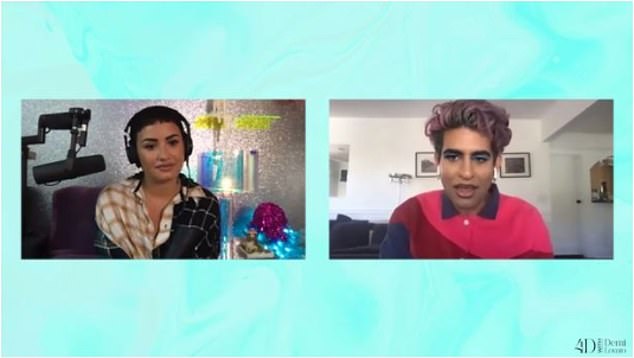 Demi was joined by American writer, Alok Vaid-Menon, (right) during the conversation, Alok is gender non-conforming and transfeminine and uses singular ‘they’ pronouns

‘Not only has my life been a journey for myself, I was also living for those on the other side of the cameras.

‘This has come after a lot of healing and self-reflective work. I’m still learning & coming into myself, & I don’t claim to be an expert or a spokesperson. Sharing this with you now opens another level of vulnerability for me.

‘I’m doing this for those out there that haven’t been able to share who they truly are with their loved ones. Please keep living in your truths & know I am sending so much love your way xox (sic).’ 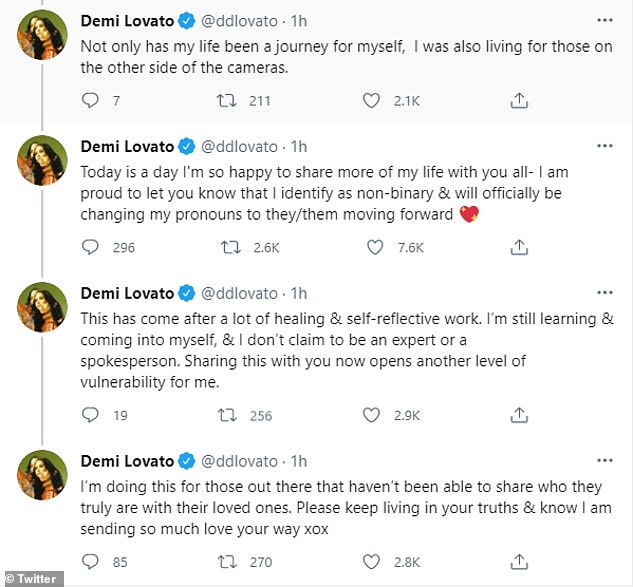 Speaking out: Alongside a video to promote their new podcast, Demi also came out to fans in a lengthy Twitter thread

Lovato went on to discuss their decision to come out in episode alongside gender non-conforming writer and artist Alok Vaid-Menon.

They explained: ‘In 2018, when I overdosed, I feel like the reason why that happened was because I was ignoring my truth, and I was suppressing who I really am in order to please stylists or team members or even fans that wanted me to be the sexy feminine popstar in a leotard and look a certain way, I thought that was what I was supposed to be.

‘Now I realize it’s so much more important to live your truth than to ever suppress yourself because that’s the kind of stuff that happens when you do.’

‘There’s nothing more freeing for me than to be unattached to a role that society wants me to play. I fully believe that gender is just another boundary that separates humanity from divine wisdom.’

They also reiterated that being non-binary didn’t necessarily mean they would stop enjoying dressing in a feminine way, insisting it doesn’t invalidate their gender identity. 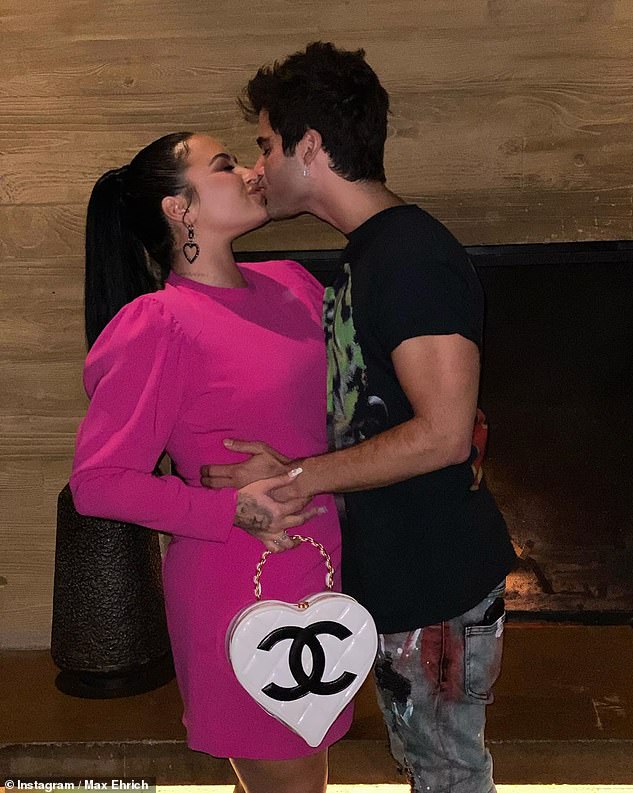 The past: Over the years Demi has had well publicized relationships with men like longtime on and off again boyfriend Wilmer Valderamma and an engagement to Max Ehrich (pictured)

‘That doesn’t mean that in that moment, I’m identifying as a woman, it just means that’s what I want to wear in that moment. I want people to understand that just because I’m non-binary, doesn’t mean I’m not going to dress the way I want.’

Lovato added: ‘To me it would mean the world if people could start identifying me as they/them. I will also be accepting if people slip and say her/she, because I know being in my position, it’s going to take a while for people to get used to.

‘I just want them to be making the effort. I think it’s important because I want to use these pronouns to feel right to me; I also just don’t want people to be so afraid of messing up that they don’t try to use them.’