Happy mom! Godfather and Annie Hall actress Diane Keaton, 76, beams as she poses for RARE photos with kids Dexter, 27, and Duke, 22, while FINALLY getting hands and foot prints in Hollywood

Diane Keaton has been acting in hit films like The Godfather, Annie Hall, Baby Boom and Something’s Gotta Give for the past 55 years. And the star has no signs of slowing down as he new film Mack & Rita is about to be released.

So it’s fitting that the acting icon has gotten her hand and foot prints at the TCL Chinese Theatre in Hollywood, which has been done in the past by such luminaries as Humphrey Bogart and Marilyn Monroe.

The beauty wore a black-and-white outfit as she smiled throughout the ceremony. And she also made the rare move of posing alongside her children, 27-year-old daughter Dexter and 22-year-old son Duke. 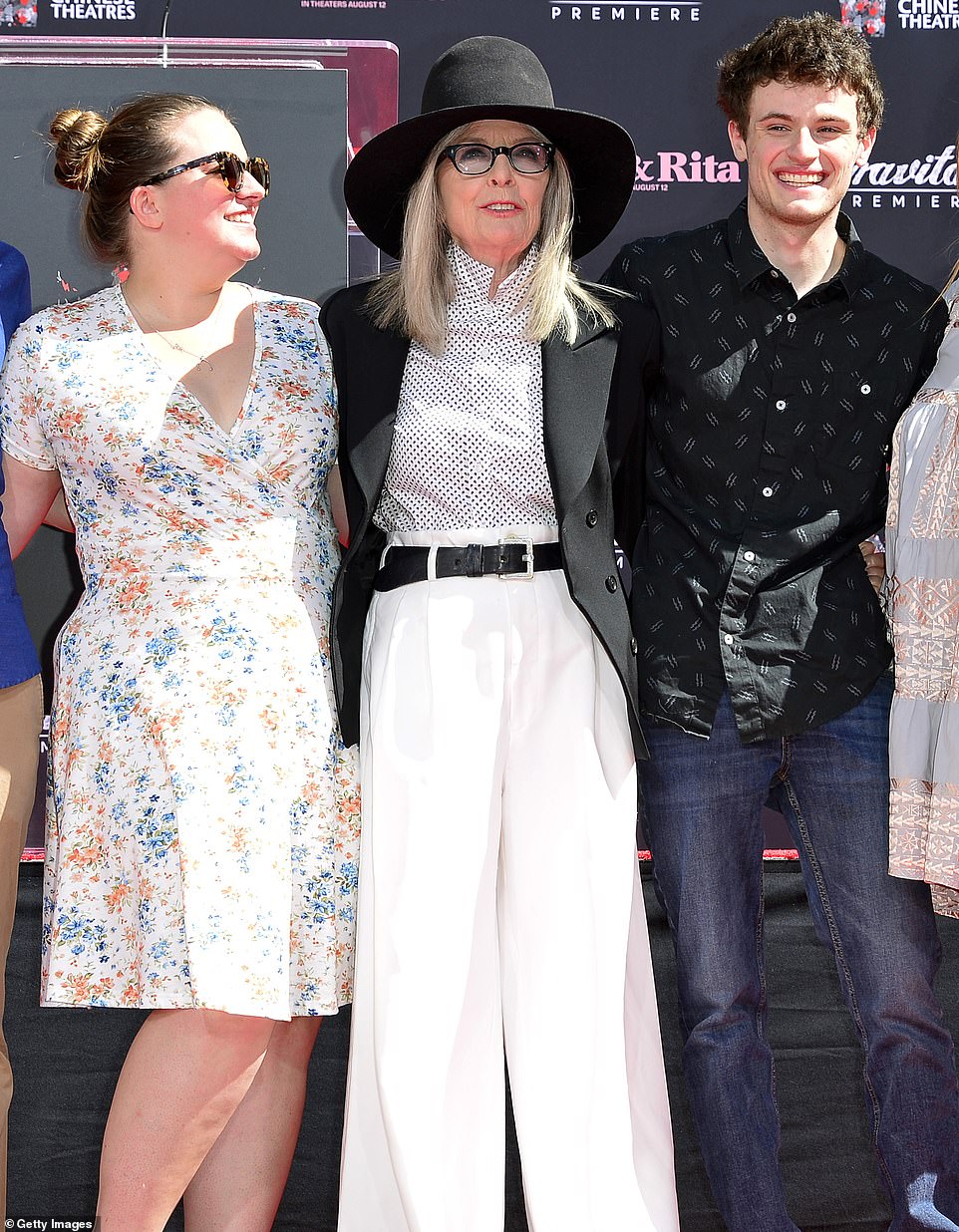 Her kids! Diane Keaton made the rare movie of posing with her children, 27-year-old daughter Dexter and 22-year-old son Duke, when at the hand and foot print ceremony for her in Hollywood on Thursday 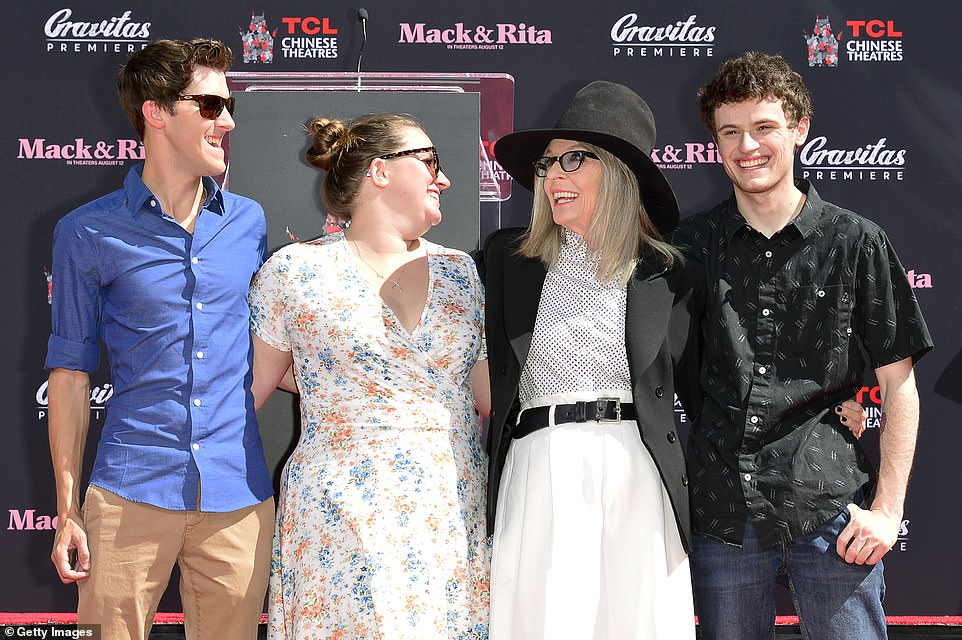 A good time was had by all: Her daughter brought along her husband Jordan White, far left, whom she wed in 2021

Dexter was with her husband Jordan White whom she wed in 2021.

Diane is not often seen with her kids at red carpet events.

‘Motherhood has completely changed me,’ Diane once gushed to Film Monthly. ‘It’s just about the most completely humbling experience that I’ve ever had.

‘I think that it puts you in your place because it really forces you to address the issues that you claim to believe in, and if you can’t stand up to those principles when you’re raising a child, forget it.’ 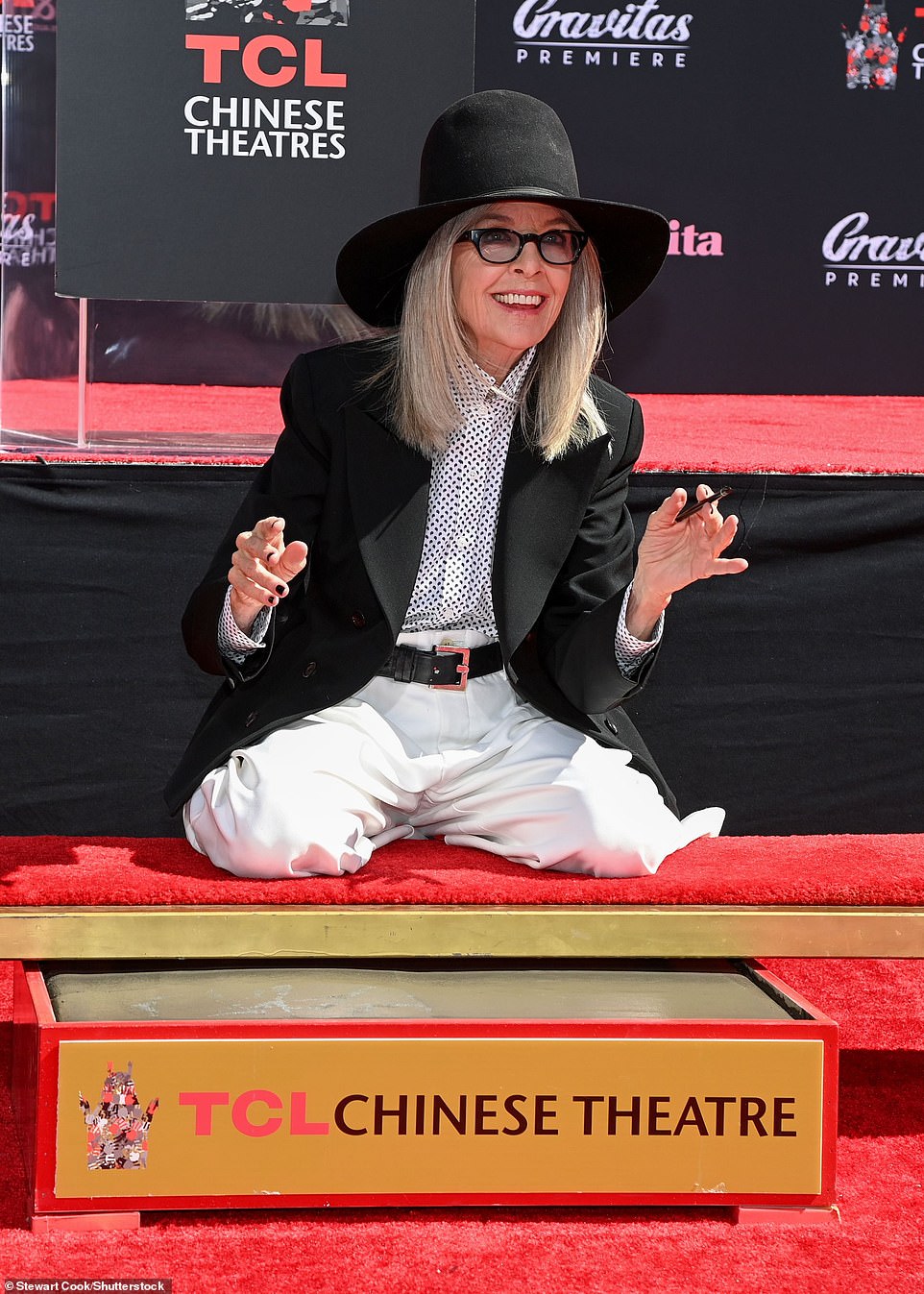 A good look: On Thursday Diane looked elegant in a black and white blouse with white slacks and a black belt 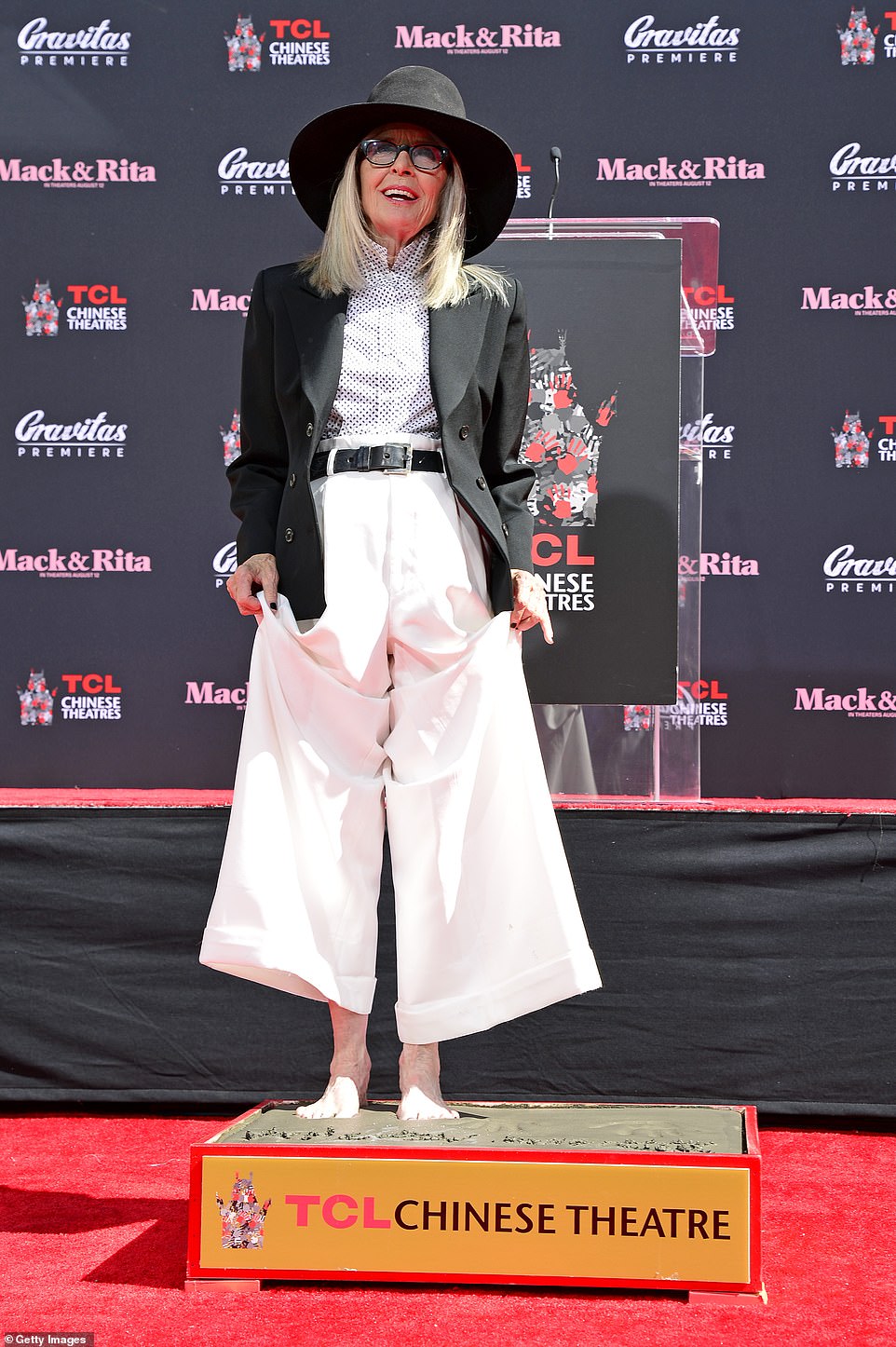 So chic: A black blazer look well tailored and she added a black hat; she is famous for wearing oversized hats 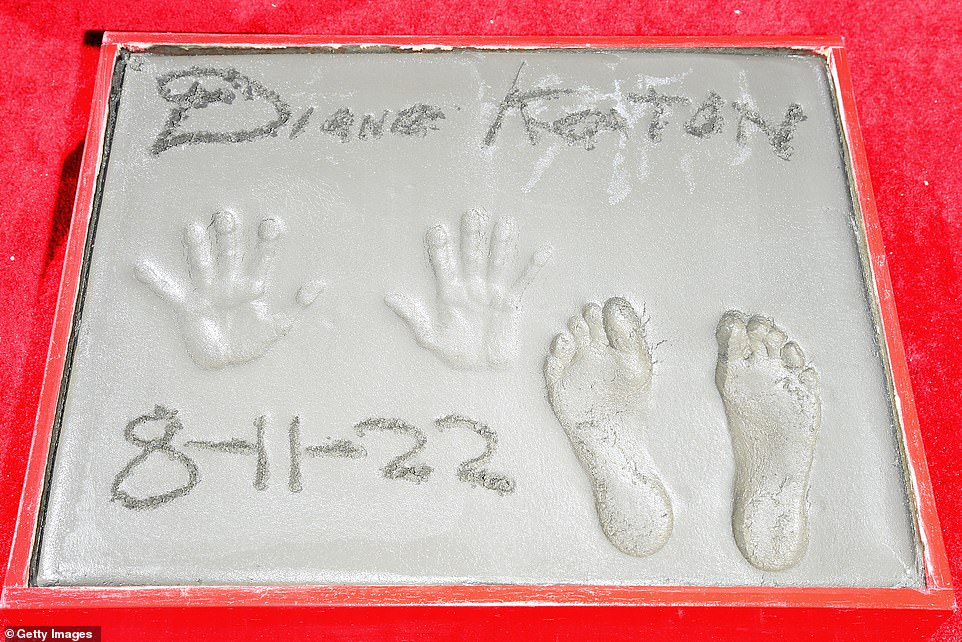 The results: Her hands and feet looked perfect as she added the date 8-11-22 and her name on top

In 2008, the star said she wanted to be in a ‘strong and substantive’ relationship before becoming a parent but at 50 she grew tired of waiting and made motherhood happen all on her own.

She has been romantically linked with Woody Allen, Al Pacino and Warren Beatty.

She told Katie Couric in 2010, ‘I think the reason I didn’t get married was because I would have to compromise too much,. I wanted to try more adventurous things for myself.’

On Thursday Diane looked elegant in a black and white blouse with white slacks and a black belt. A black blazer look well tailored and she added a black hat.

Her hair was worn down as she stunned in tinted black glasses. Keaton also had on pretty pink lipstick and her nails were painted black.

Diane is also an advocate and lover of animals. She is on the board of the animal advocacy group Social Compassion In Legislation, which is an animal advocacy group that promotes legislation to protect animals. Based in California, numerous states have copied the laws that SCIL gets passed. SCIL is known in the US and internationally. 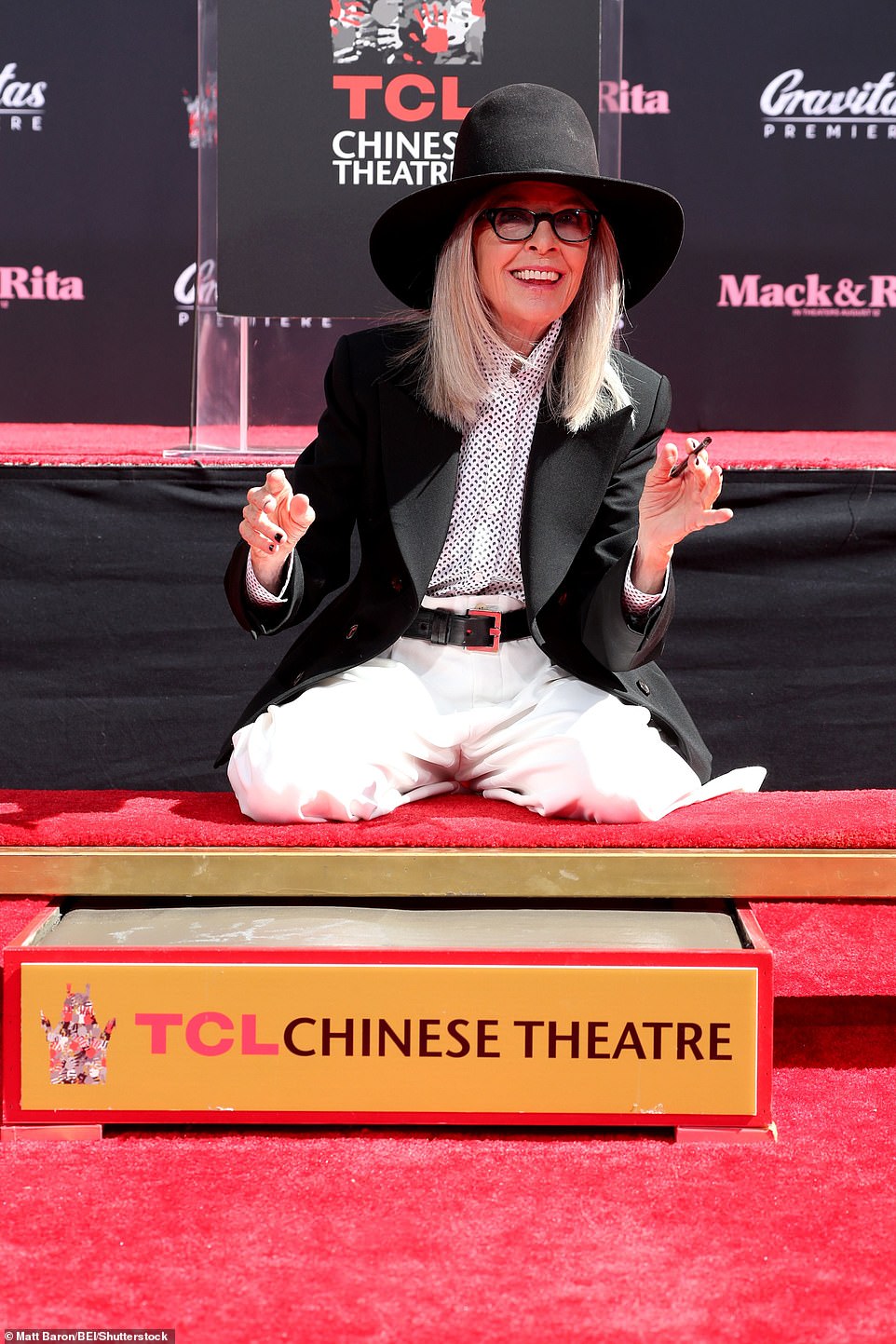 Her way: Her hair was worn down as she stunned in tinted black glasses. Keaton also had on pretty pink lipstick and her nails were painted black 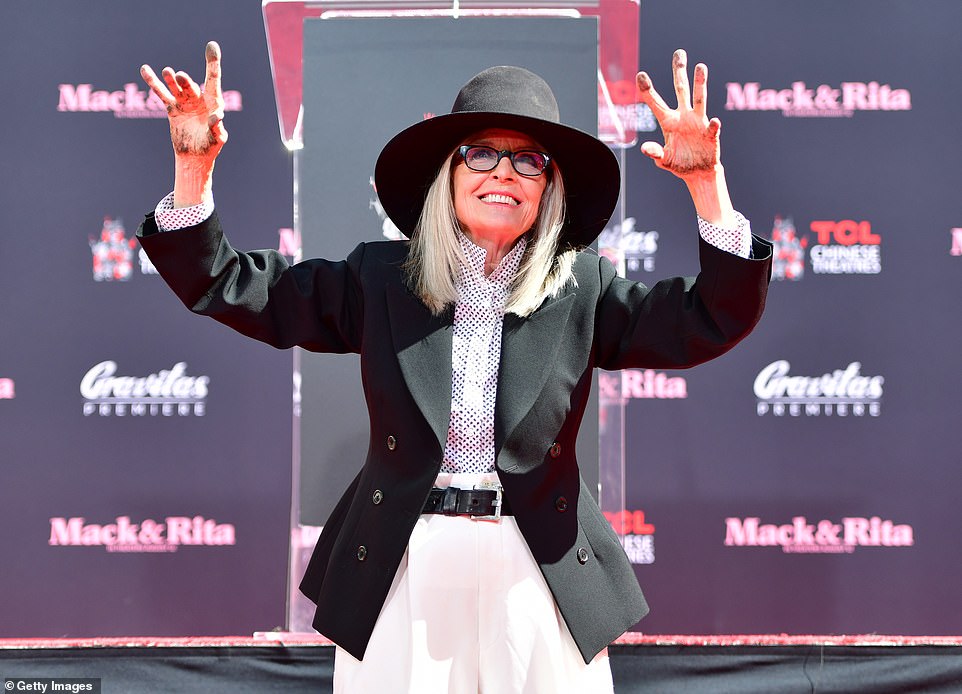 All muddy for a good time: Here she raised her hands to show off the cement left behind as she smiled

The director first compared Keaton to ambitious actress Eve Harrington from the 1950 Hollywood classic All About Eve.

‘This is not to suggest that Diane when I met her was ruthlessly ambitious, but she did make an interesting Freudian slip,’ Allen told the star-studded audience at the Dolby Theatre in Hollywood.

‘When we started going out she meant to refer to me as a talented young director, but instead called me a stepping stone. So, it was a red flag,’ Allen quipped as Keaton laughed from the dais. 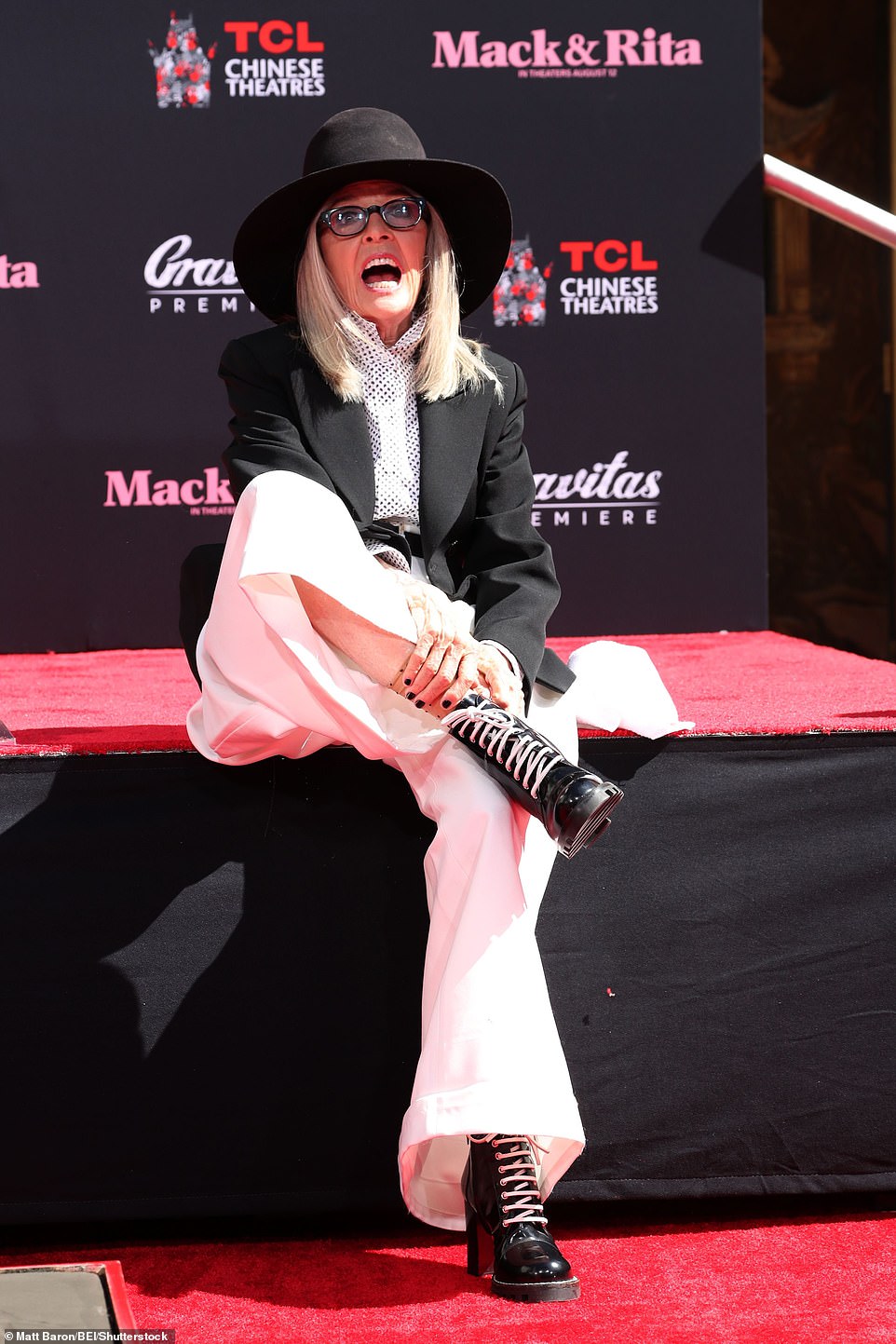 Before her feet got dirty: The beauty wore chunky black high heeled lace up boots which she had to take off 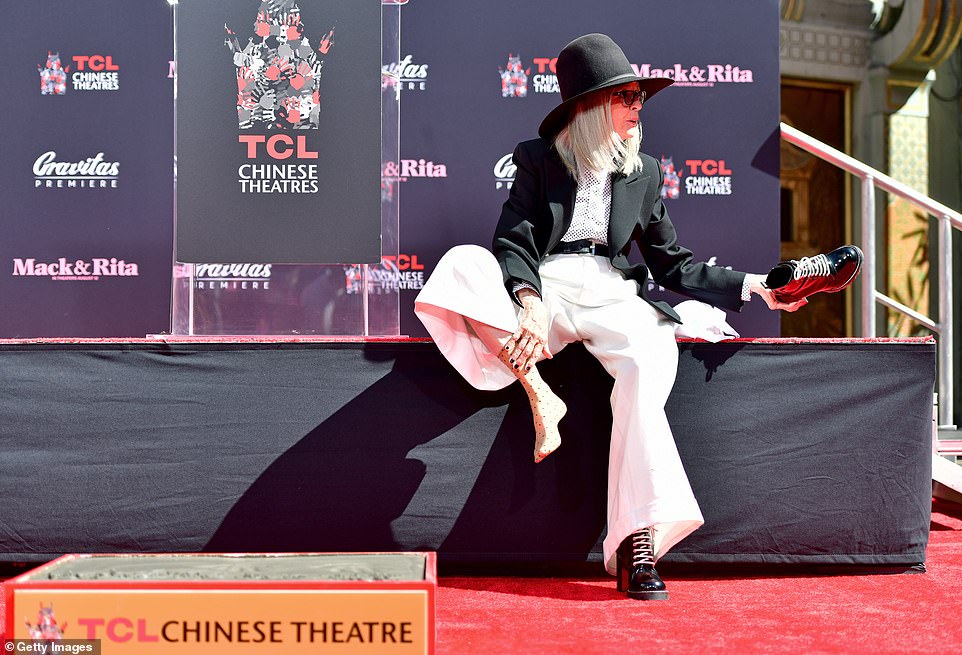 One shoe off, one shoe on: The star took off one of her boots to reveal she had on polka dot socks in beige and black

Allen also said that Los Angeles native Keaton was a ‘beautiful girl in New York City’ but noted that she wasn’t a ‘conventional’ beauty.

‘By conventional, I mean pleasing to the eye,’ he joked causing Oscar-winner Reese Witherspoon to crack up.

Allen also praised Keaton’s writing ability and singled out her 2011 memoir Then Again in which she wrote about suffering from bulimia and her love for the director.

‘I didn’t know you loved me and were bulimic. So we’d have dinner. She tells me she loves me and then she’d go throw up. I was taking her to these high-end restaurants, $400 for dinner. If I had known she was throwing up, I would have taken her to Pizza Hut and saved a fortune,’ Allen joked. 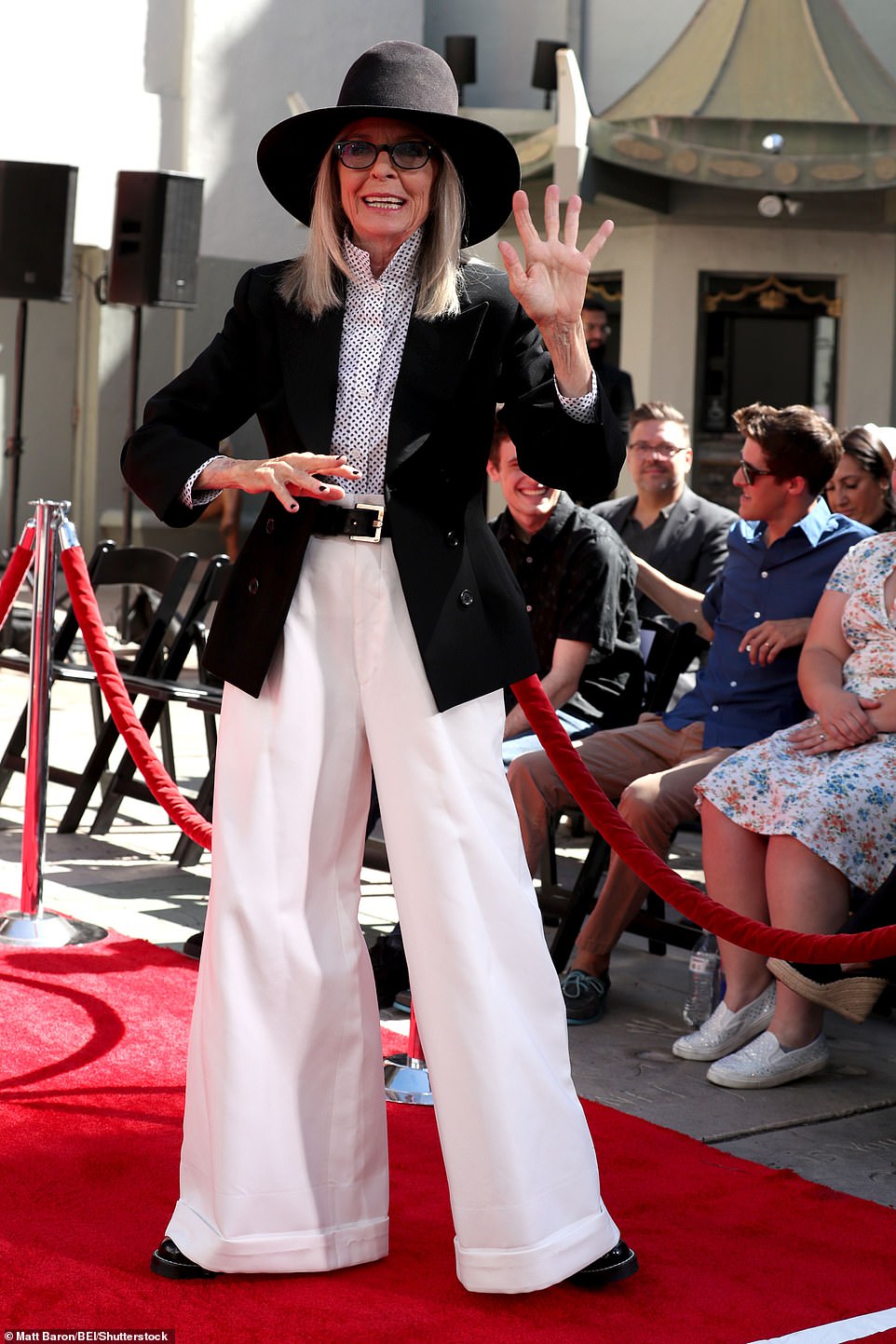 Allen also said he alleviated his good friend Keaton’s ‘mortal fear of death’ by comparing it to a colonoscopy but noted that ‘life is like the prep day’.

He then turned serious and called Keaton who he directed in eight films a ‘great inspiration’.

‘Much of what I’ve accomplished in my life I owe for sure to her,’ Allen said.

‘This is a woman who is great at everything she does,’ he said while presenting her with the 45th AFI Lifetime Achievement Award.

Keaton during the 90-minute special broadcast on TNT earlier praised Allen during a pre-recorded segment for creating roles for women. 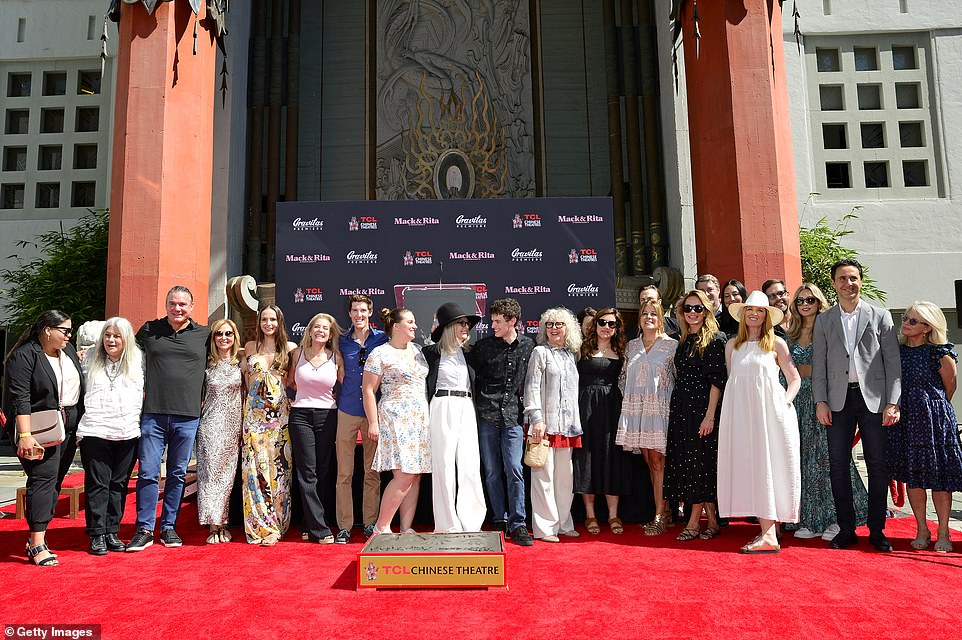 She certainly has a lot of friends: Keaton is flanked by her two children as she poses with her collection of close pals

She starred in his 1977 movie Annie Hall that won four Oscars, including Best Actress for Keaton, Best Director for Allen, Best  Original Screenplay for Allen and co-writer Marshall Brickman as well as Best Picture.

Keaton upon accepting her award from Allen then admitted that she wasn’t going to deliver an acceptance speech.

‘No interest in it whatsoever. Give me a break. Enough is enough,’ Keaton said.

She instead thanked her family and friends and AFI and revealed she was going to sing a song of gratitude that Allen gave her.

Keaton then sweetly sang the little song that included the lyrics ‘Seems like old times, staying up all hours, making dreams come true’ and received a standing ovation.

Steve Martin and Martin Short performed a musical roast of the actress.