The Induction of Duran Duran into the Rock & Roll Hall of Fame was supposed to be celebratory night that would also serve as a reunion for the British band who formed back in 1978.

And while the evening at the 37th annual ceremony at the Microsoft Theater was still a time to feel proud for original members Nick Rhodes, John Taylor, Roger Taylor, and Simon Le Bon, the reunion with former guitarist Andy Taylor did not happen after all.

During their induction speech frontman Le Bon informed the audience, via a letter on behalf of Andy Taylor, that he couldn’t attend the event due to ‘a setback’ in his treatment for stage 4 metastatic prostate cancer, according to Rolling Stone. 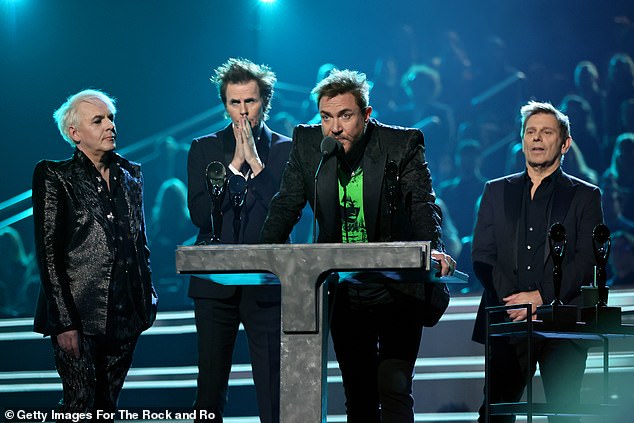 Shocking announcement: Duran Duran singer Simon Le Bon revealed the band’s original guitarist Andy Taylor couldn’t make their induction into the Rock & Roll Hall of Fame on Saturday due to ‘a setback’ in his treatments for stage 4 prostate cancer

Dressed in a lime-green suit, Hollywood A-lister Robert Downey Jr. had the honor of inducting Duran Duran into the hall of fame.

Once on stage to accept the honor the tone tuned serious when the band’s singer revealed his former bandmate wanted to make it to the event, but in the end could’t make it due to his cancer treatments.

Dressed in a black-patterned suit, Le Bon took the lead and read a letter on behalf of Taylor, 61.

‘Just over four years ago I was diagnosed with stage 4 metastatic prostate cancer. Many families have experienced the slow burn of this disease and of course, we are no different,’ Taylor began in his message to fans.

‘So I speak from the perspective of a family man but with profound humility to the band, the greatest fans a group could have, and this exceptional accolade.’

The Tynemouth, Northumberland, England native went on to reveal that despite receiving world-class treatment he suffered ‘a setback’, although his condition is ‘not immediately life-threatening, there is no cure.’ 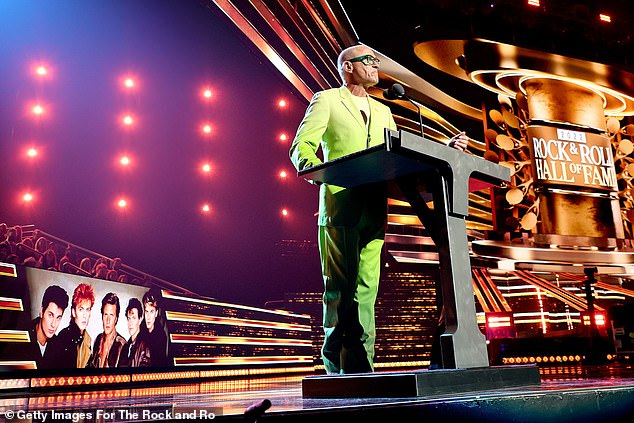 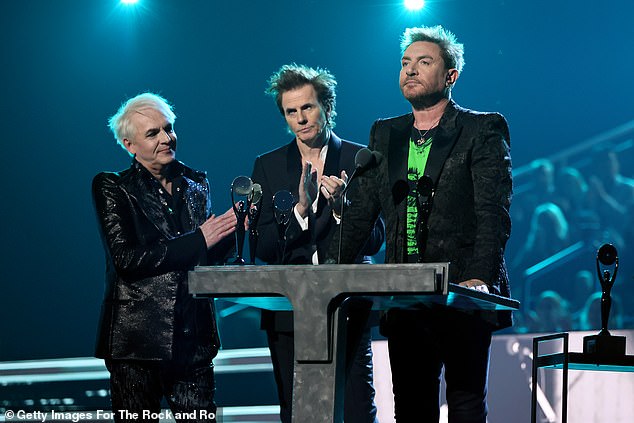 On behalf of former bandmate: Dressed in a black-patterned suit, Le Bon, 64, took the lead and read a letter on behalf of Andy Taylor, 61, that started with the guitarist revealing he was diagnosed with stage 4 metastatic prostate cancer four years ago 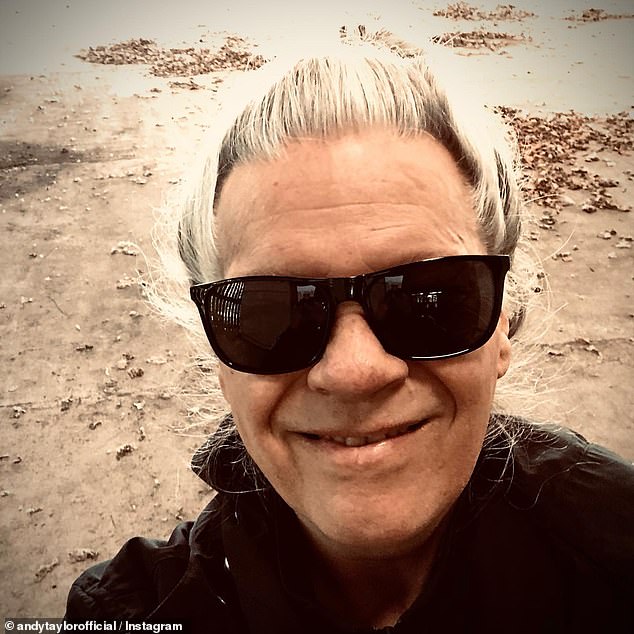 Open and honest: ‘Despite the exceptional efforts of my team, I had to be honest in that both physically and mentally, I would be pushing my boundaries,’ Taylor, 61, wrote of his current condition in the letter

‘Despite the exceptional efforts of my team, I had to be honest in that both physically and mentally, I would be pushing my boundaries, the letter continued. ‘However, none of this needs to or should detract from what this band (with or without me) has achieved and sustained for 44 years.’

He then talked about some of the fond memories he has of writing, recording and touring the world with the band.

‘We’ve had a privileged life, we were a bit naughty but really nice, a bit shirty but very well dressed, a bit full of ourselves because we had a lot to give, but as I’ve said many times, when you feel that collective, instinctive, kindred spirit of creativity mixed with ambition, armed with an über cool bunch of fans, well what could possibly go wrong?’

Taylor also wrote how he had planned to be with the band on stage to accept the Rock & Roll Hall of Fame honor.

‘I’m massively disappointed I couldn’t make it, let there be no doubt I was stoked about the whole thing. Even bought a new guitar with the essential whammy,’ he confessed.

‘I’m so very proud of these four brothers. I’m amazed at their durability and I’m overjoyed at accepting this award.’

In closing, he shared how he ‘often doubted the day would come. I’m sure as hell glad I’m around to see the day.’ 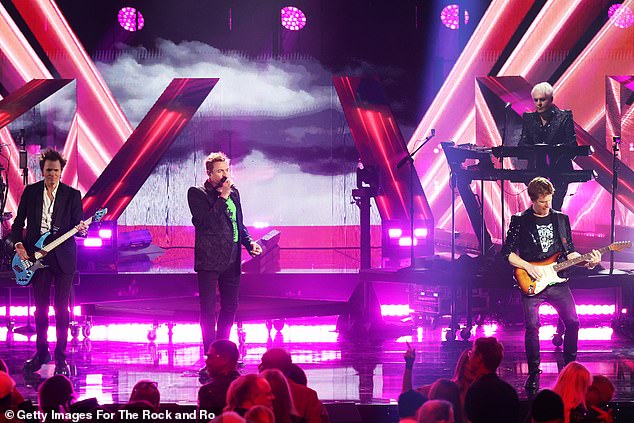 Rock the house: The Hungry Like The Wolf stars also performed during the 37th annual Rock & Roll Hall of Fame ceremony that was held at the Microsoft Theater in Los Angeles 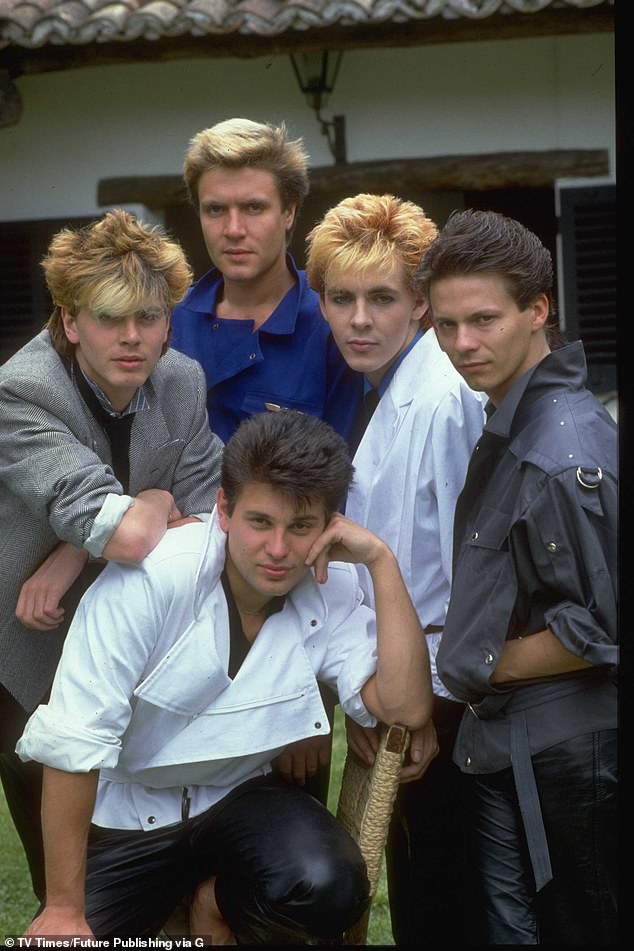 Massive: Duran Duran were arguably the biggest band in the world at one point in the 1980s; John Taylor, Simon Le Bon, Nick Rhodes, Andy Taylor and Roger Taylor are seen on 1983

While speaking to journalists backstage at the ceremony, Le Bon called the news of their friend and former bandmate ‘absolutely devastating,’ according to AFP.

‘We love Andy dearly. I’m not gonna stand here and cry, I think that would be inappropriate, but that’s what it feels like,’ he added.

Andy Taylor was with the band since its inception in the late 1970s, left in the mid-80s amid the height of the band massive popularity, returned in 2001, only to have the band cut ties with him in 2006, citing an ‘unworkable gulf’ between him and the rest of guys.

The guitarist who replaced Taylor in 1986, Warren Cuccurullo, was expected to attend the induction, but in the end did not go to the event.

From the start, Duran Duran was a hitmaker, scoring 21 top 40 singles in the US Billboard Hot 100 including Hungry Like The Wolf, Girls On Film, Rio, Save A Prayer, A View To A Kill, The Reflex, Ordinary World, Planet Earth, Is There something I Should Know?, Notorious and New Moon On Monday, among many others.

Duran Duran has sold over 100 million records, making them one of the world’s best-selling music artists. 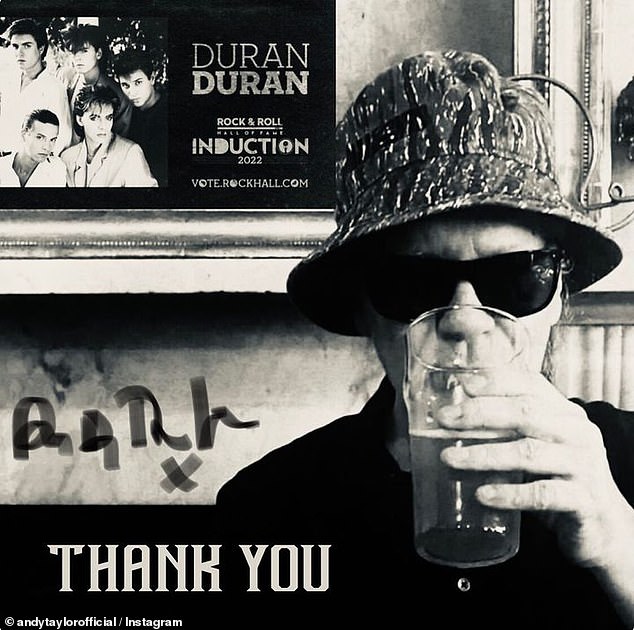 Giving thanks: Upon learning Duran Duran being nominated into the Rock & Roll Hall Of Fame, Andy Taylor shared his gratitude for the honor on Instagram February 6 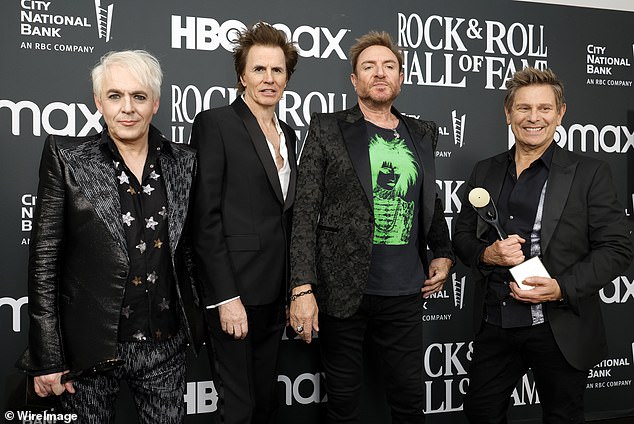 Heartbreaking: While speaking to journalists backstage at the ceremony, Le Bon called the news of their friend and former bandmate ‘absolutely devastating,’ according to AFP; the four original members include Nick Rhodes, John Taylor, Simon Le Bon and Roger Taylor