‘I feel like me again!’: Gogglebox’s Ellie Warner looks sensational as she rocks colourful pink and purple hair after glamorous lockdown makeover

She’s sported a few bold hairstyles since shooting to fame as a regular on hit show Gogglebox.

And Ellie Warner looked sensational as she debuted her latest eye-catching look to Instagram on Saturday after giving herself a glamorous lockdown makeover.

The TV personality, 30, who is a hairdresser, happily declared that she ‘feels like me again’ after transforming her blonde tresses by dying them pink and purple. 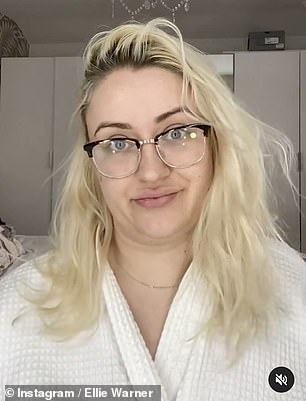 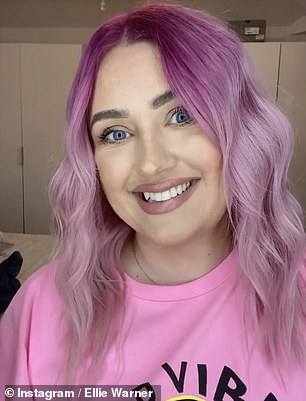 Lockdown makeover: Ellie Warner looked sensational as she debuted her latest eye-catching look to Instagram on Saturday (left, before dying her hair and right after the transformation)

Ellie shared her transformation in a short video, kicking things off while dressed in a white robe and looking unimpressed as she posed for the camera.

The beauty went makeup free and donned glasses as she played with her bleach blonde tresses, moving her locks around to showcase her dark roots.

However after covering the camera Ellie revealed her brightly coloured hair and could not stop smiling as she flaunted her vibrant look.

She also rocked a full face of beauty products including foundation, mascara and a slick of glossy pink lipstick to accentuate her pretty features. 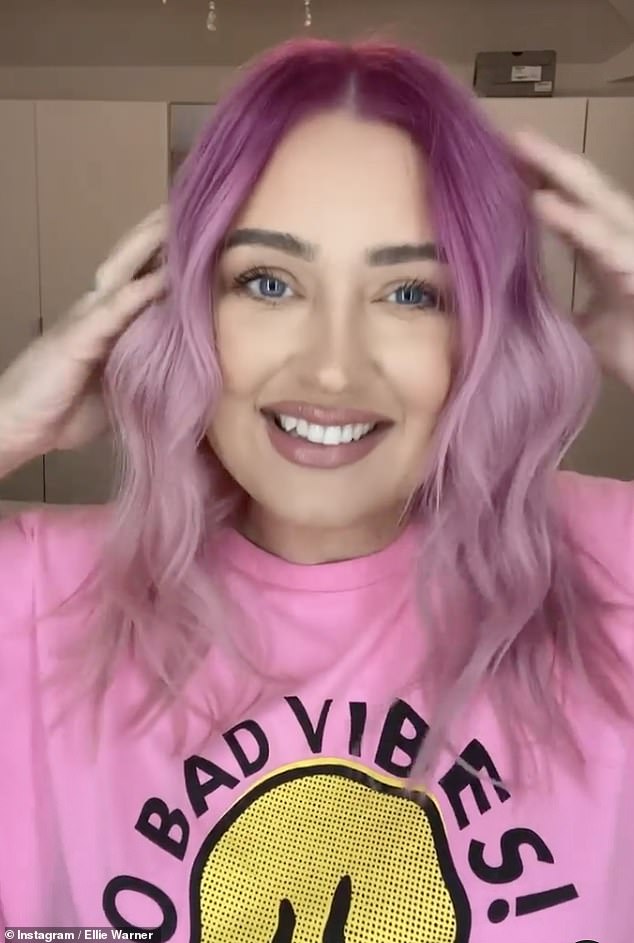 ‘I feel like me again’: The Gogglebox regular, 30, was very pleased with her new eye-catching pink and purple look

Captioning her transformation clip, Ellie penned: ‘I feel like me again. Would anyone like to see a how I achieved this look? Let me know.’

Hundreds of the Gogglebox star’s fans replied to her clip, with fellow star of the show Scarlett Moffat penning: ‘Beautiful xxxx’

Last September Ellie showcased another pink and purple hairstyle she’d created as she posed for a selfie with her sibling.

And she has also posted pictures while sporting green locks as well as a creation she dubbed ‘the Tango Ice Blast’ which included pink and blue like the drink. 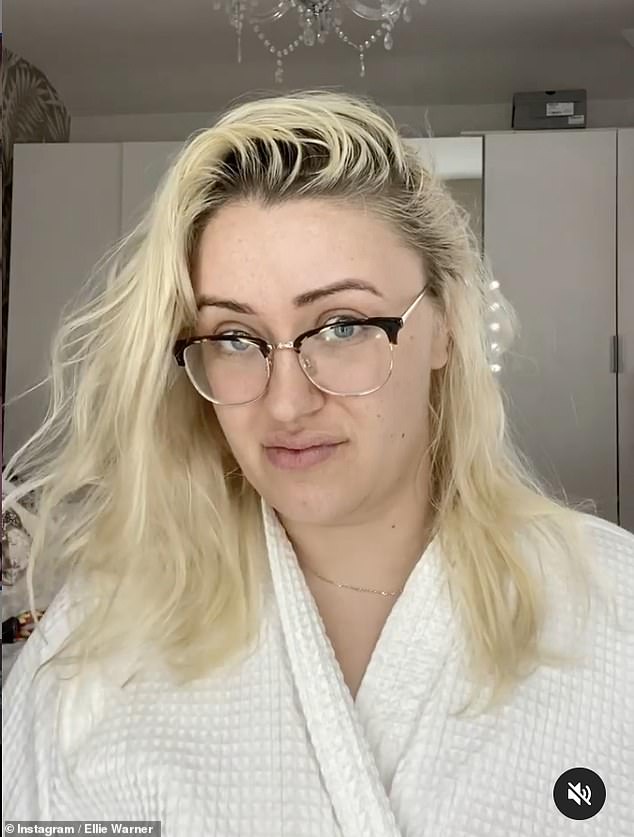 Not feeling it: At the start of her video, Ellie looked unimpressed as she showcased her blonde hair and went makeup free

Big hit: Hundreds of her followers replied saying they loved the colourful do, with fellow Gogglebox star Scarlett Moffatt commenting ‘beautiful xxxx’ under the post

Ellie and her sister Izzi returned to the latest series of Gogglebox and often share snaps of themselves filming for the show.

The latest hair makeover also comes after Izzi stunned fans as she showcased her slender figure on Instagram six months after giving birth to her daughter Bessie.

The reality TV star took to social media to proudly post a snap of herself in a fitted black t-shirt as she ribbed her partner Grant for his photography skills.

The Channel 4 star also wore a pair of curve-hugging acid wash jeans that featured statement rips down each of the legs. 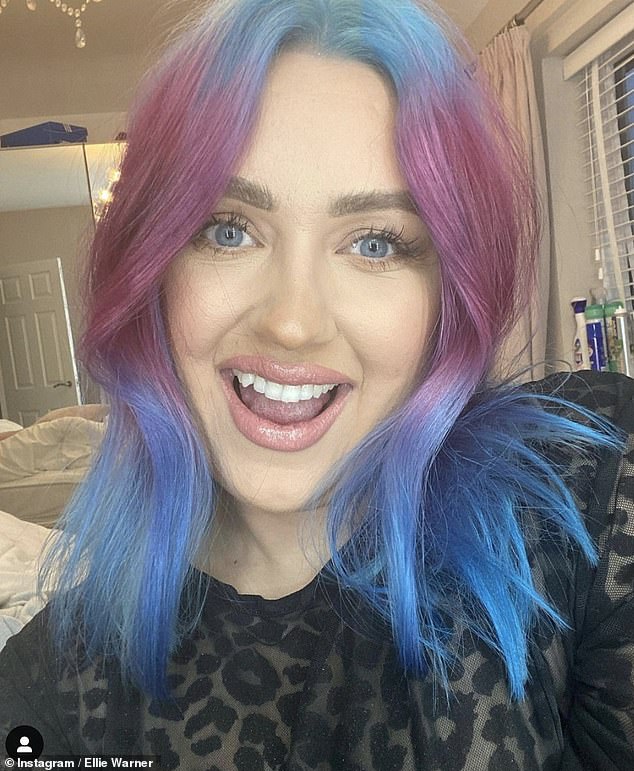 Going bright: Ellie has also sported a colourful creation she dubbed ‘the Tango Ice Blast’ which included pink and blue hair like the drink 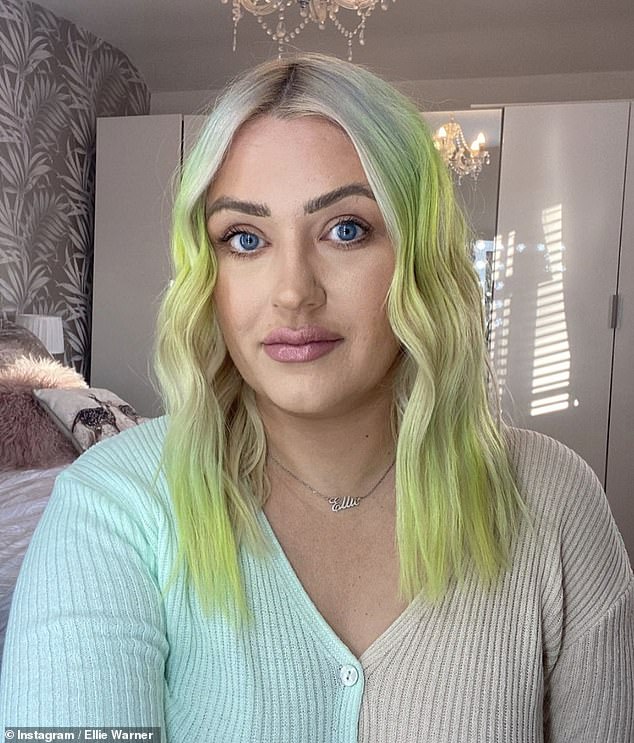 Changing it up: Another style tried out by the hairdresser was this pastel green do 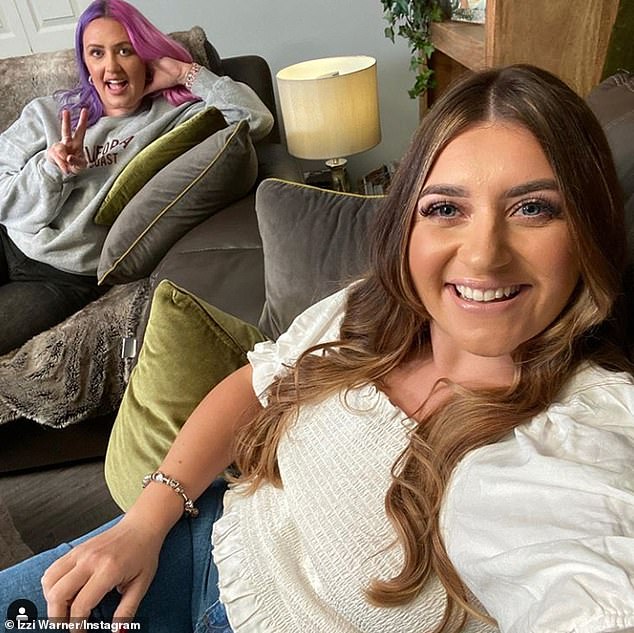 Changes: Ellie often shares snaps of her brightly coloured hairstyles while filming for Gogglebox with her glamorous sister Izzi

The mother-of-two accessorised her stylish outfit with a black Gucci belt and a complemented leather bag.

Izzi rounded off her look by working her long caramel tresses into a soft curl and sported glamorous make-up.

Captioning the radiant shot, she penned: ‘If anyone knows any crash courses in photography I can send Grant on please let me know #wheresmyfeet #bestofabadbunch #datenight’. 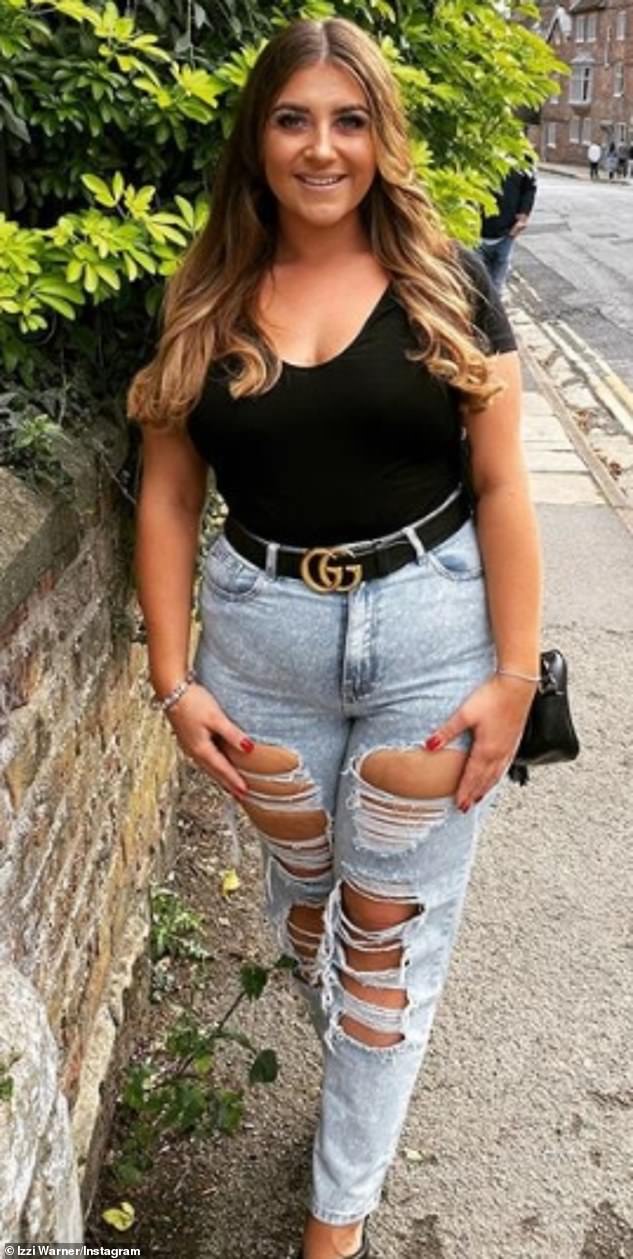