Home » Hilary Duff wanted her son Luca, 9, to watch her give birth

Hilary Duff says she wanted son Luca, 9, to witness her water birth so he could see ‘how strong women are and what childbirth looks like’

Hilary Duff has revealed why she wanted her son Luca, nine, to witness the at-home water birth of new baby daughter, Mae.

The Younger star, 33, who gave birth to Mae on March 24, made the revelation during an appearance on the Informed Pregnancy podcast.

‘It was kind of important for me [for him to be there] because I’m really big on being open and honest with him about how strong women are and what childbirth looks like,’ Hilary told Dr. Elliott Berlin on Thursday. 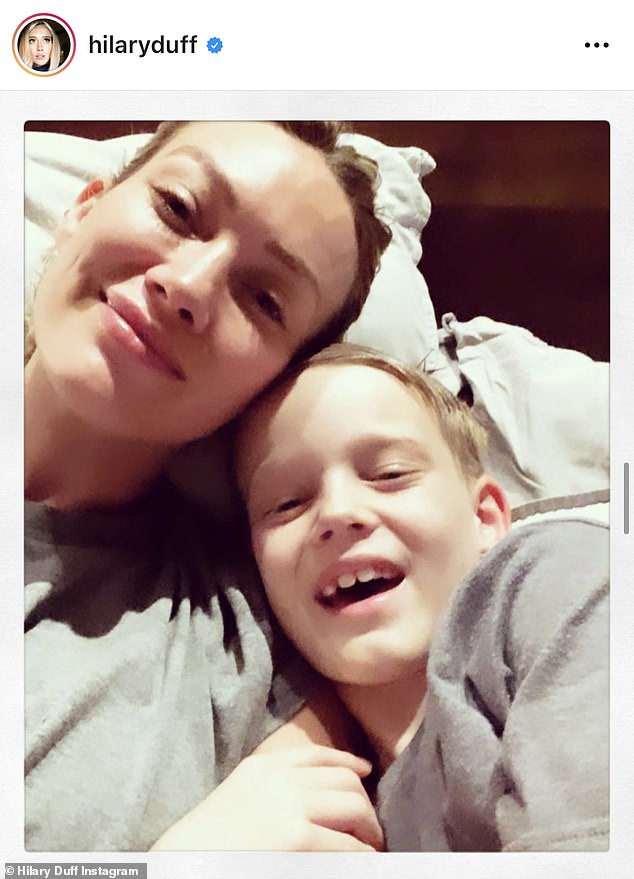 Welcoming his baby sister: Hilary Duff wanted her son Luca, nine, to witness the at-home water birth of her daughter, Mae. Seen in 2020

‘He knows all about periods and it’s important for me to normalize that conversation with him for all the women that are going to be in his life.’

‘He wanted to be there for it, but it happened so fast he missed it,’ the Cheaper By The Dozen actress said.

Hilary also revealed that her labor and delivery lasted for over three hours. 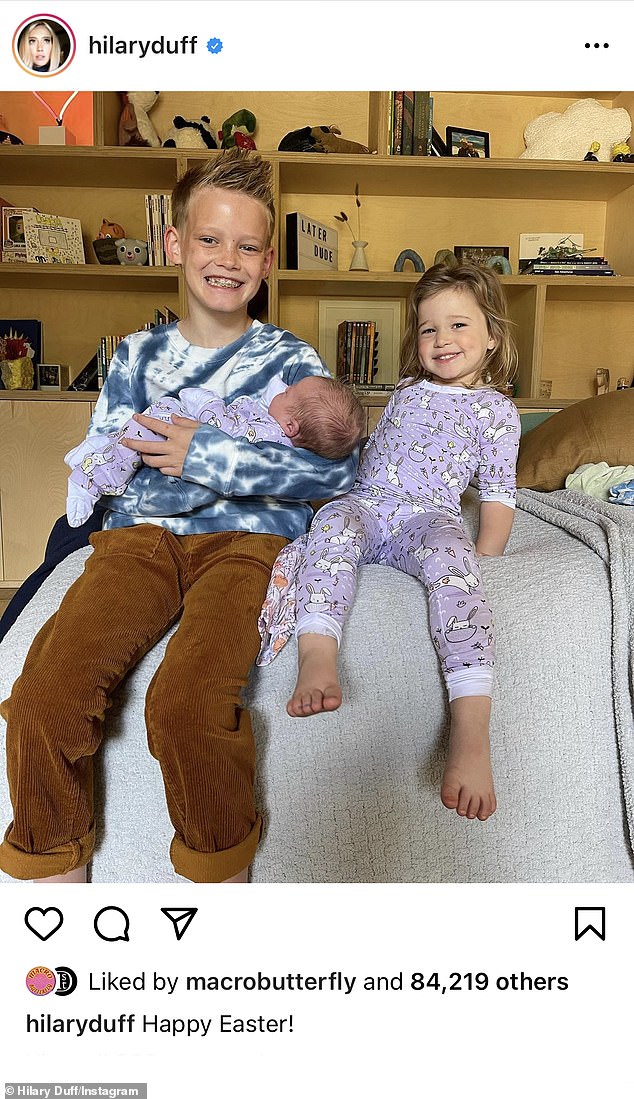 Happy family: Luca with his sisters Banks and Mae celebrating the Easter holiday on April 1, 2021

The actress explained that she wanted to dispel the notion that women are inherently weaker than men.

‘I think that sometimes a 9-year-old boy is like, “Well, men have bigger muscles,” and, like, yeah, but we bring life into this world. We move a baby through our body,’ she said.

‘There is a big topic of conversation in the house right now: equality, and strength coming from different places besides your muscles or whatever.’ 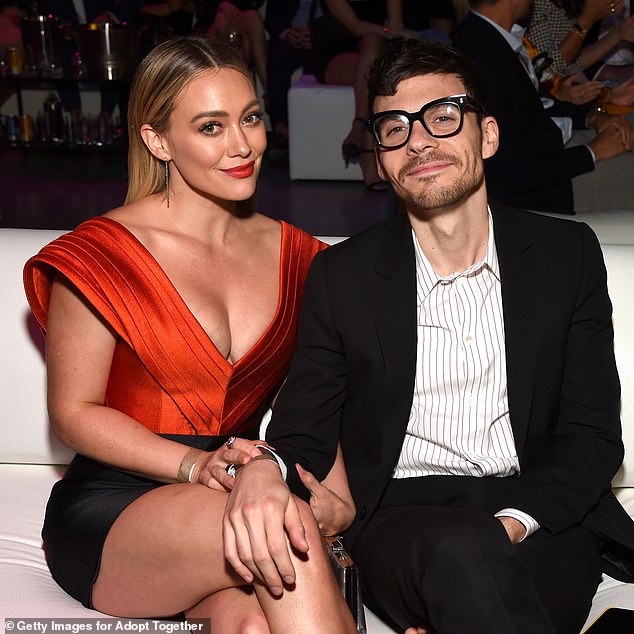 Power couple: The actress and her musician husband Matthew Koma married in 2019 after meeting when they worked together on Hilary’s fifth album. Seen in 2019

Mae is Hilary’s third child. She shares Mae and Banks with her husband and singer-songwriter, Matthew Koma, 33. Matthew and Hilary started dating in 2017 and tied the knot in December 2019.

She was previously married to former professional hockey player Mike Comrie, who is Luca’s father. The Canadian NHL star and the Maxim cover girl wed in 2010 after three years of dating. 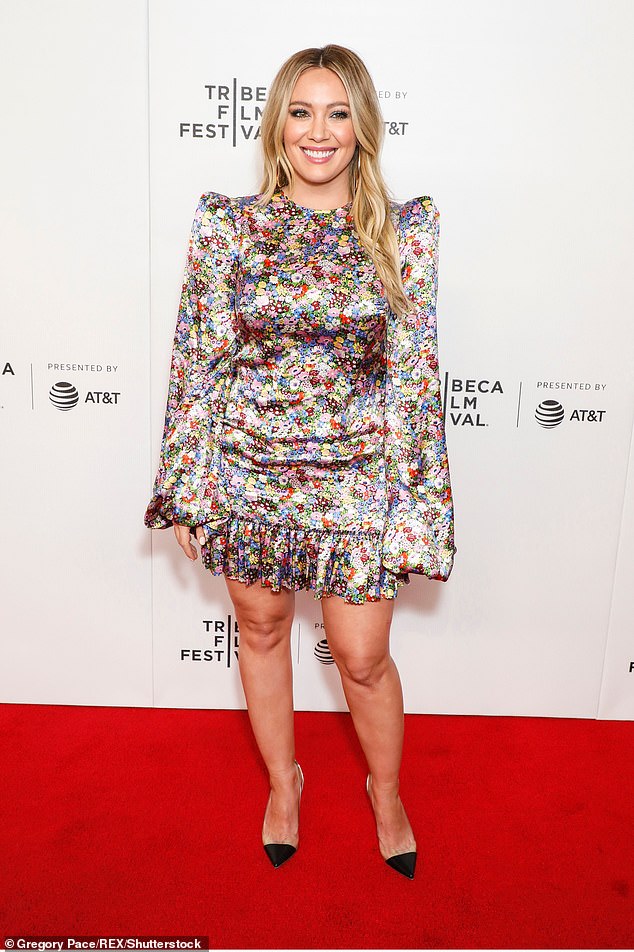 Fan favorite: The Lizzie McGuire star can be seen on the seventh and final season of Younger on Paramount+.  From the Younger premiere in 2019

Hilary became a household name after landing the role of the titular character in the Disney Channel’s hit series Lizzie McGuire. The show debuted in 2001 and concluded in 2004.  The actress reprised her role in 2003 when she starred in The Lizzie McGuire Movie.

The former teen idol is also a singer-songwriter. She has released five albums, several of which went gold and platinum. Hilary met Matthew when they worked together on her fifth album Breathe In. Breathe Out. in 2015.

To the delight of her fans, Duff announced in 2019  that she would be coming back as Lizzie McGuire in a revival of the series.

However, the project was later scrapped by Disney+, explaining that they were holding off on the show ‘unless and until’ they could meet fans’ expectations.

Hilary can be seen in the seventh and final season of the comedy-drama series Younger which premiered Thursday on Paramount+.