‘I was stitched up and not physically great’: Jaime Winstone reveals pal Cara Delevingne helped her get back into the party scene after giving birth by whisking her away to Mexico

Jaime Winstone has credited her pal Cara Delevingne with helping her to ‘get back into the saddle’ after she gave birth to her son Raymond in 2016.

The actress, 37, admitted that after giving birth she was ‘still stitched up and physically not great,’ but the model insisted they travel to Mexico for her birthday party.

It comes amid claims that Cara’s family are planning an intervention for her, with sources claiming they have become ‘worried’ about her after a string of erratic public appearances in recent weeks. 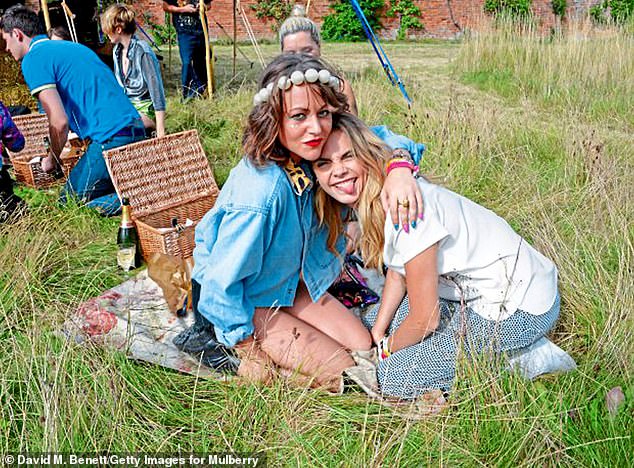 Best friends! Jaime Winstone has credited her pal Cara Delevingne with helping her to ‘get back into the saddle’ after giving birth (pictured in 2014)

Speaking to The Sunday Times, Jaime admitted that Cara has been the source of some of her favourite celebrity parties including a wild getaway to Mexico to celebrate her birthday.

She explained she was still recovering from giving birth to her son when Cara convinced her to travel abroad for the wild celebration.

‘I remember when I first had Raymond I was very out of the loop. You’re a bit bigger than you usually are, a bit scared to go back into the party scene with the monsters of London,’ she said. 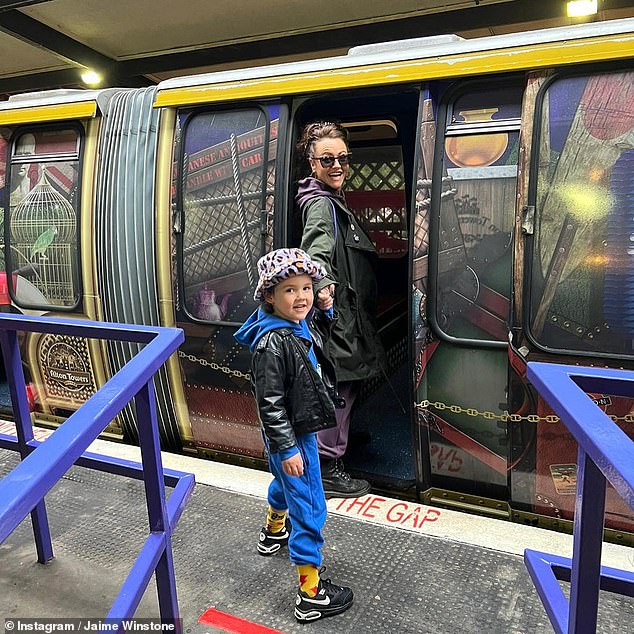 Family: The actress admitted that after giving birth to her son Raymond (pictured) she was ‘still stitched up and physically not great’

‘She arranged a birthday party, all her besties, nearest and dearests, in Mexico. I was like, ”I’m still sort of stitched up, still not physically great, not at my best.” But she whisked me away and single-handedly got me back in the saddle. Which was a really generous and important thing to do.

‘And she had us jumping out of planes, driving into the jungle in SUVs. Getting tattooed pretty much getting off the plane.’

Jaime reflected on some of her favourite parties while promoting her podcast Greatest Night Ever, which sees her reflect on such occasions with celebrity guests, including Rita Ora, Asim Chaudhry and Danny Dyer. 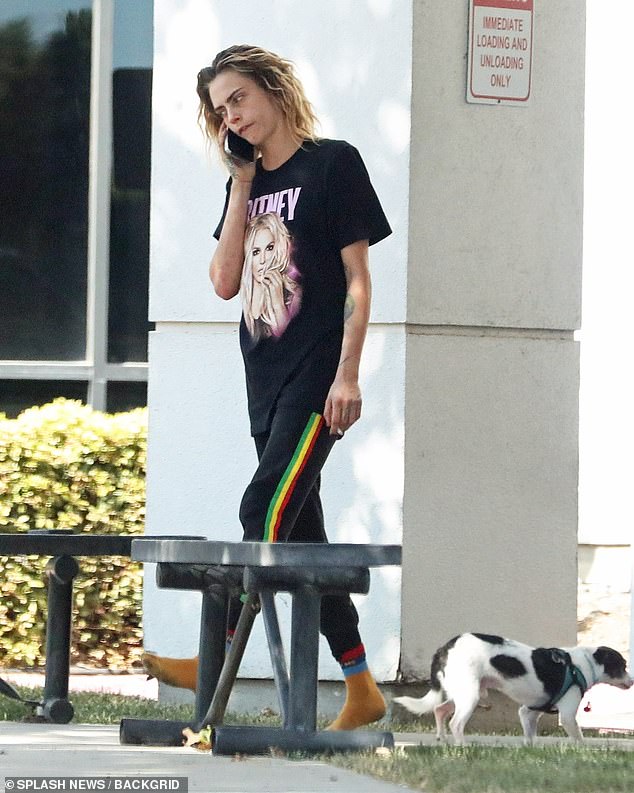 Tough time: It comes following reports that Cara’s family are considering an intervention following a string of erratic behaviour

It comes following reports that Cara’s family are considering an intervention following a string of erratic behaviour.

Most recently, the model was seen with her feet dangling from the window of a car as a driver took her to the private Van Nuys airport in LA to board a private jet.

‘She was chain-smoking and speaking heatedly into her cellphone, which she dropped on the tarmac at one point,’ a witness told The Mail on Sunday.

Earlier this month, Cara was spotted outside an LA sex shop smoking an unknown substance from a pipe and dropping liquid from a bottle into her mouth.

A family friend said: ‘It is all very troubling. Cara has been open about her mental health issues in the past.

‘She comes from a very good, close family and, of course, they will rally round and do whatever it takes to help her.’ 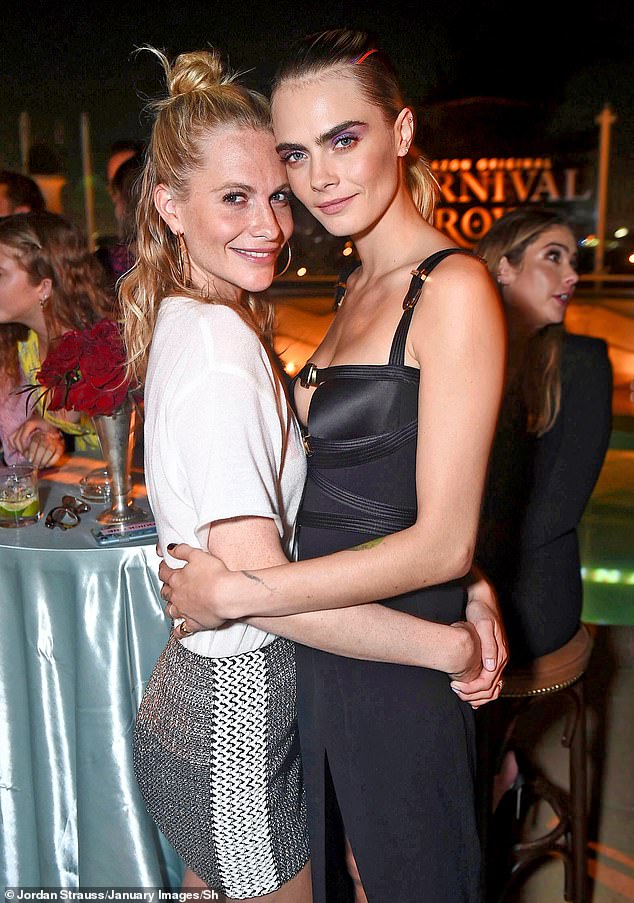 Sisterly help: It was previously reported that Cara’s sister Poppy Delevingne has raced to her  side (pictured together in 2019) after a series of erratic public appearances

The Oscar-nominated star was seen struggling to contain her emotions after leaving a rented home in West Hollywood to travel to Los Angeles International airport around 5pm.

It was not clear if Cara was at home when Margot was there. 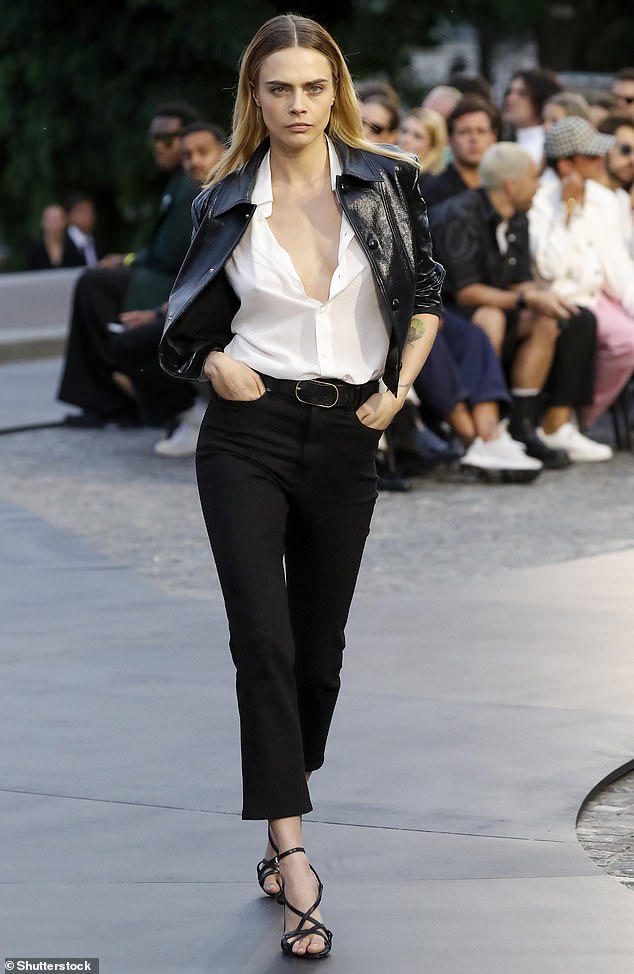 Worrying: It has been claimed that her family and friends are searching for ways to help the troubled former ‘it girl’

It has been claimed that her family and friends are searching for ways to help the troubled former ‘it girl’.

‘We are all incredibly concerned. The situation has been building for a few weeks now, and Cara’s family is involved,’ a close friend told The Sun.

‘There is talk of staging some kind of intervention and making sure Cara gets the help she may well need,’ the person added.

‘She has been burning the candle at both ends of late, and it’s clearly taking its toll.’

According to DailyMail.com sources, the cover girl appeared unable to control her body movements at certain points as she was seen on the phone, bending over, dropping her phone, and walking around looking very jittery and as if she was unable to stop moving.

Sources told MailOnline that she didn’t eat or shower while at the event, which doesn’t feature shower facilities or any food stalls. 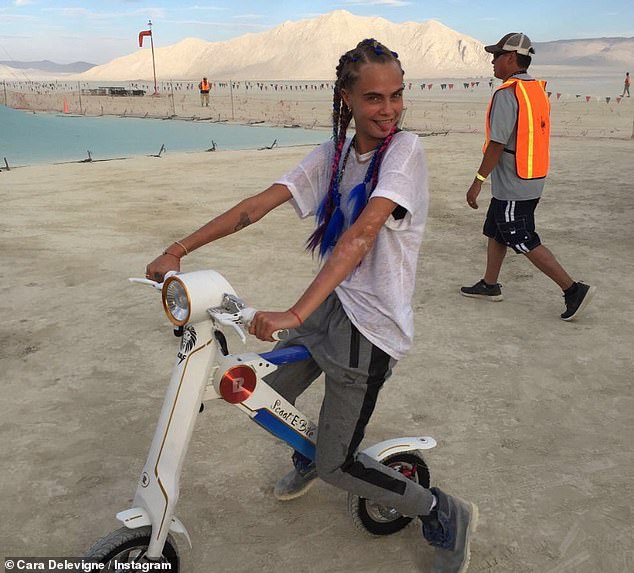 Worrying: Sources previously told MailOnline that Cara didn’t eat or shower at Burning Man Festival, which she attended days before her first public appearance (pictured in 2016)