Jason Momoa is reportedly rebounding with Eiza Gonzalez months after announcing his shock split from his wife Lisa Bonet.

Lisa, 54, and Jason, 42, were together for 16 years and welcomed two children before they revealed in January that they had decided to divorce.

Now multiple People insiders are claiming he has struck up a romance with Eiza, 32, though one source said: ‘It’s nothing serious yet.’

Jason was spotted over a month ago posing solo for the cameras while attending the premiere of Eiza’s latest film Ambulance.

‘They are dating. He cares about her. He’s in a great place, working on Fast X. He’s quite busy and he’s in a good place,’ a source told the outlet.

To hear another insider tell it: ‘They’re both busy with work but are having fun together. It’s nothing serious yet.’

Although Lisa and Jason first became a couple in 2005, they waited until 2017 to marry, tying the knot at an intimate secret wedding. 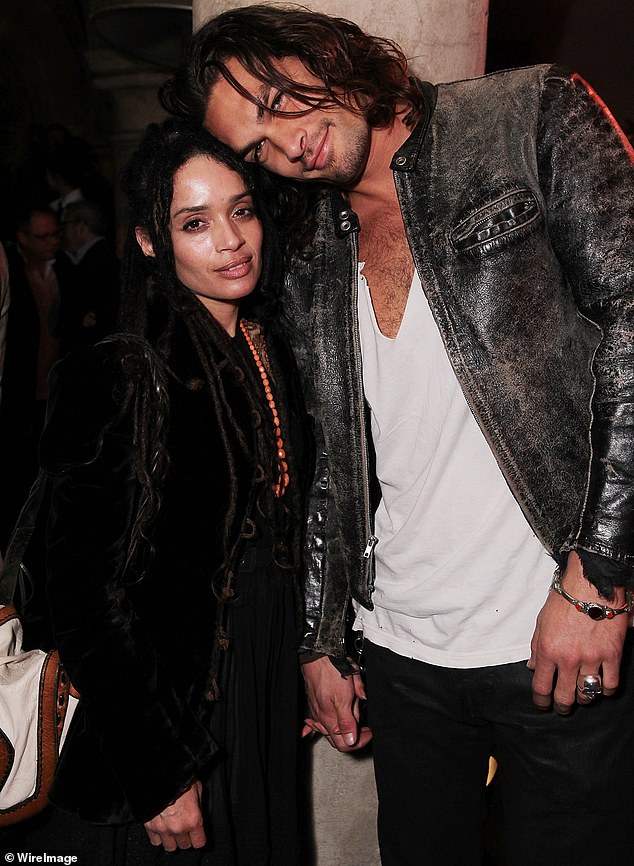 Throwback: Although Lisa and Jason first became a couple in 2005, they waited until 2017 to marry, tying the knot at an intimate secret wedding; they are pictured in 2010

Over the course of their relationship they welcomed two children into the world – daughter Lola, 14, and son Nakoa-Wolf, 13.

Jason and Lisa announced their separation jointly this January in a co-written statement he posted to his Instagram page.

‘We have all felt the squeeze and changes of these transformational times… A revolution is unfolding and our family is of no exception… feeling and growing from the seismic shifts occurring,’ they wrote.

‘The love between us carries on, evolving in ways it wishes to be known and lived. We free each other to be who we are learning to become,’ the statement added, noting: ‘Our devotion unwavering to this sacred life & our Children.’ 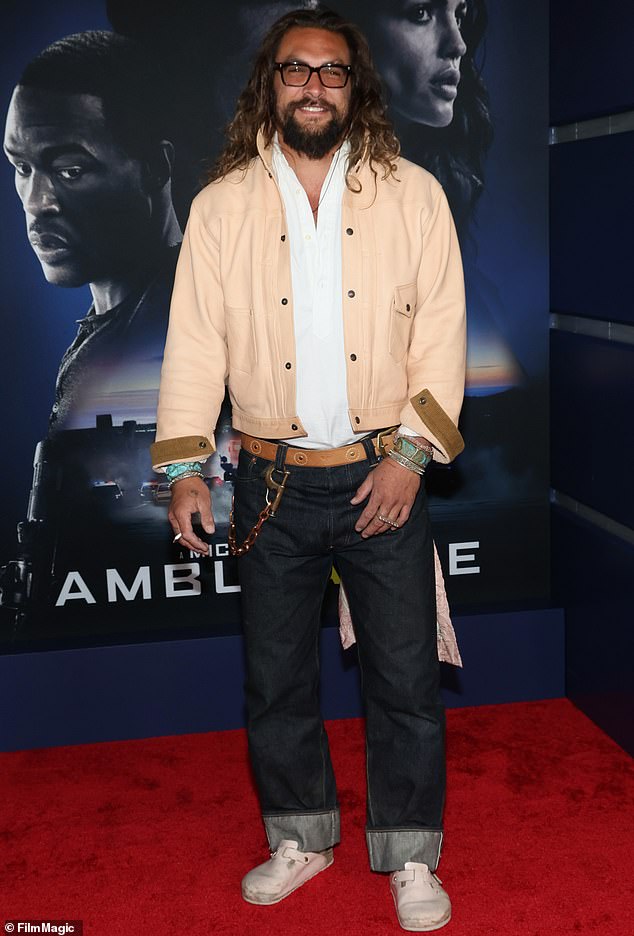 There he is: Jason was spotted over a month ago posing solo for the cameras while attending the premiere of Eiza’s latest film Ambulance

Reports circulated that Jason had begun living in a $750k RV he had used in the past for location shoots and customized with such amenities as a kingsize mattress.

He was said to have parked the RV at the home a friend whose lived near Jason’s marital home with Lisa, where she was staying with the children.

Not long after the split was announced, a source informed People that Jason and Lisa’s marriage fell apart ‘because of different focuses.’

The insider spilled that Jason’s ‘career is booming’ with the result that ‘he wants to keep working as much as he can,’ while Lisa ‘enjoys her life in LA’ and had ‘no interest’ in traveling with him to ‘every location.’ 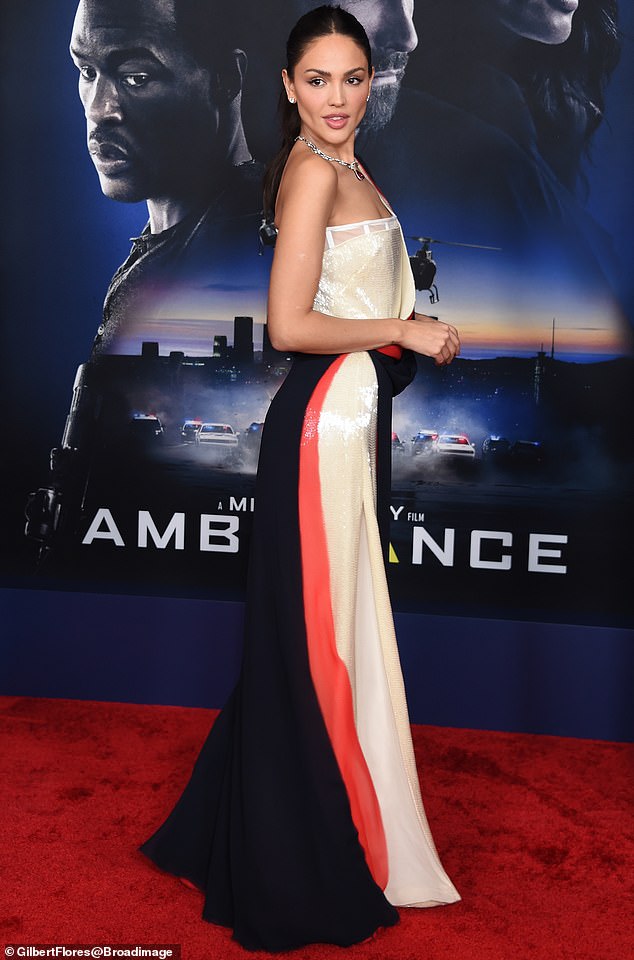 Smoldering sensation: Eiza is pictured at the premiere of Ambulance, where she was not snapped hobnobbing with Jason

Conjecture swirled in March that Jason and Lisa were giving the marriage another try, with the speculation going into overdrive after she was spotted wearing his ring.

However by the end of the month Jason assured Access that ‘we’re not back together,’ though he added that he and Lisa are ‘family forever.’

A few years ago in 2018, Eiza had a whirlwind relationship with movie dreamboat Josh Duhamel, who had recently split from his wife Fergie.

She then enjoyed a summer romance in 2020 with Timothee Chalamet not long after his breakup with Johnny Depp’s daughter Lily-Rose Depp. 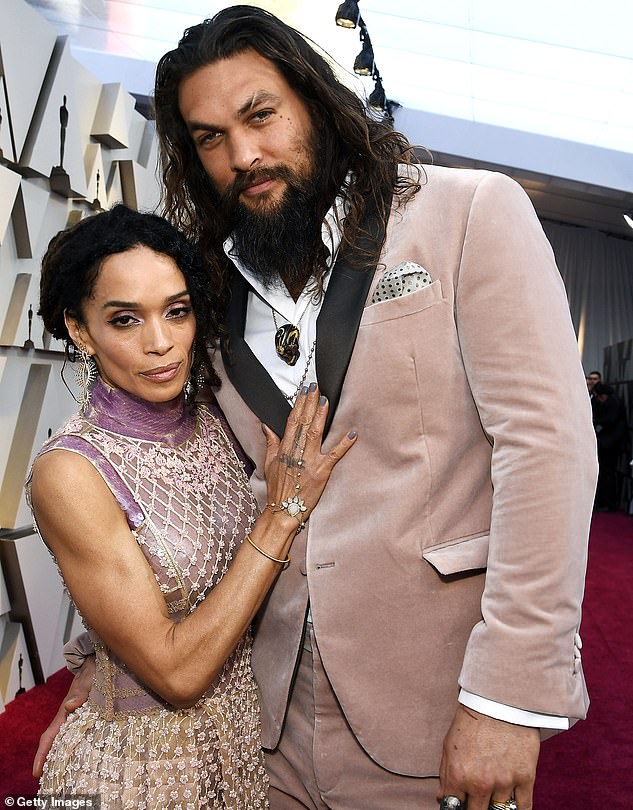 The way they were: Jason and Lisa announced their separation jointly this January in a co-written statement he posted to his Instagram; they are pictured at the 2019 Oscars