Ben Affleck and his superstar wife, Jennifer Lopez, were spotted spending time with the family as they cruised around Los Angeles in a newly modified vintage tiffany blue Bronco on Saturday.

The star, 53, looked far from your average Jenny on the block as she sat shotgun in the USD $265K Ford she purchased for Ben, 50, almost six months ago as a birthday gift.

The On the Floor singer – who recently gushed about her blended family with Ben -looked chic in a cream turtle neck and large glasses. 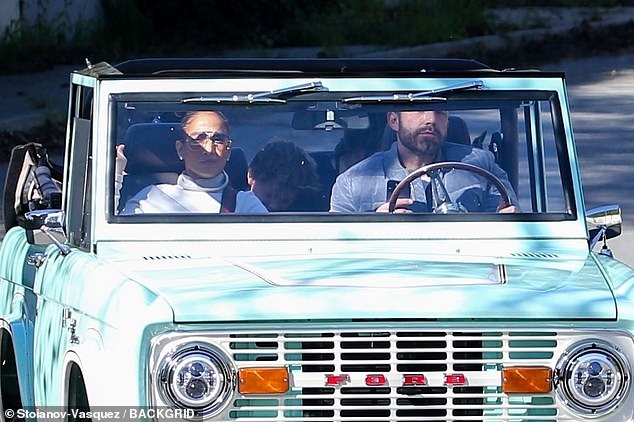 New Vintage: Ben Affleck and Jennifer Lopez, were spotted cruising around Los Angeles in a $265K vintage Bronco on Saturday

The custom ride was built using the classic body style with the Ford’s inline six or V8 engine removed in an interesting conversion from gas to all-electric.

The owner of Gateway Bronco, Seth Burgett told Motor Biscuit in December: ‘Jennifer Lopez bought the Bronco for Ben for his 50th birthday.’ He added, ‘(It) arrived the day before Ben’s birthday.’

Vintage Broncos like Affleck’s are prime targets for converting to all-electric power because they are tough, so you can add several heavy batteries without ruining the handling. 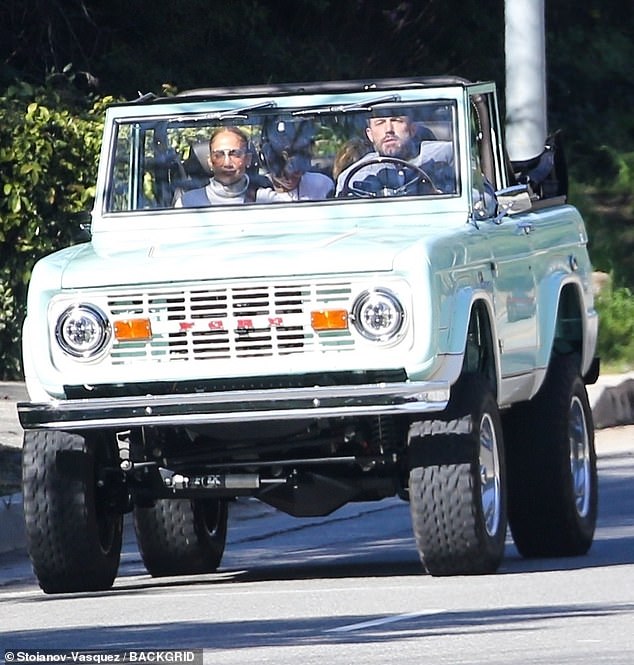 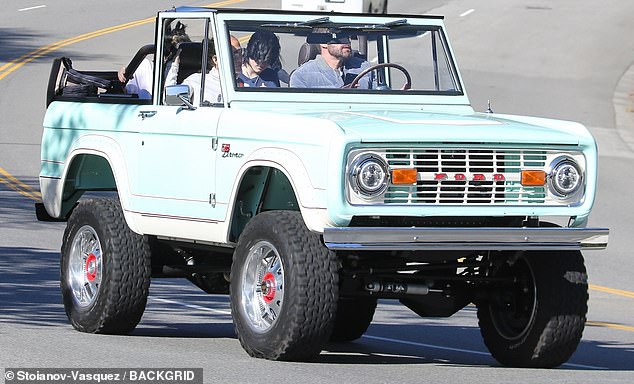 Busy dad: The On the Floor singer actress looked chic in a cream turtle neck and large glasses

The actress and singer recently gushed about becoming a stepmother to the Oscar winner’s three children while speaking with Extra at the premiere of her new romantic comedy Shotgun Wedding.

While she stunned on the red carpet in a sheer Valentino Couture gown decorated with sparkling spangles, Jennifer sounded over the moon while speaking about combining her family with Ben’s. 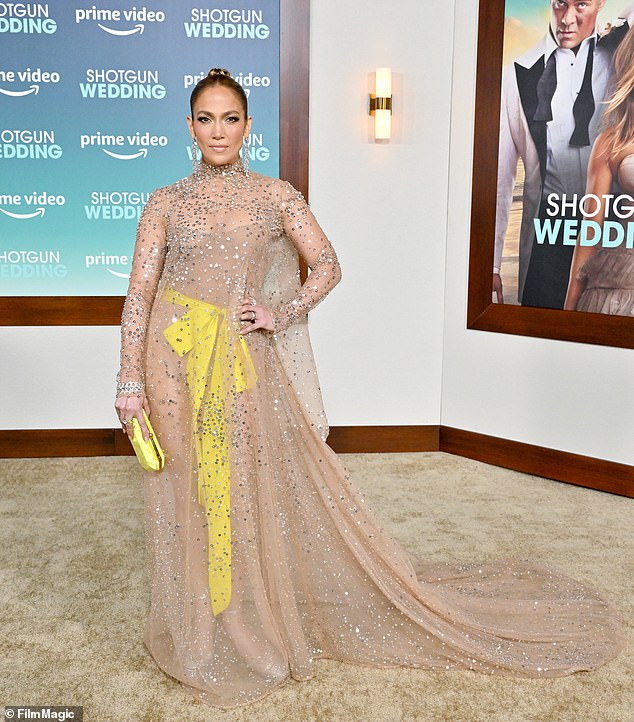 Growing family: Jennifer called her blended family and Affleck’s children ‘blessings’ while chatting with Extra on Wednesday at her Shogun Wedding premiere

‘We dropped one of them off at school today, and we were just kind of thinking about what our lives have become and just feeling so blessed and grateful for where we wound up in our lives,’ she continued. ‘It’s a beautiful night, that’s all I can say.’

During an appearance on Today earlier this week, Jennifer said she had had her ‘best year’ in a long time after she and Ben moved in together and their children could finally be together under one roof.

‘We moved in together, the kids moved in together. So it’s been, like, a really kind of emotional transition. But at the same time, like, all your dreams coming true and it’s just been a phenomenal year. Like, my best year, I think, since my kids were born,’ gushed.

Ben also became the stepfather of her twins Emme and Max, 14, whom she shares with her ex-husband Marc Anthony. 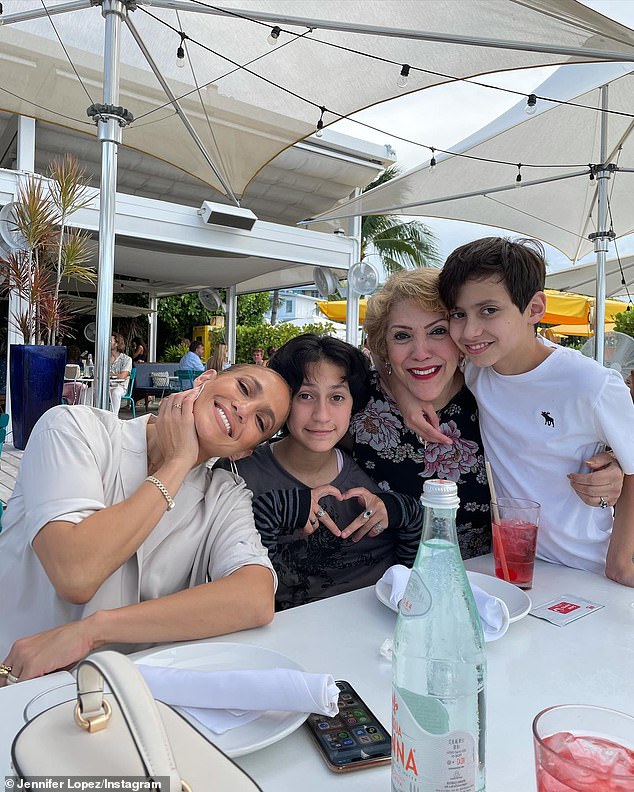 But Jennifer wasn’t completely cheery at the premiere, as she shared with People that she often struggles to balance her busy professional life with her family obligations.

‘I put my best foot forward as much as I can,’ she said modestly, before adding that she prefers to keep it to herself when she’s stressed out by her obligations.

‘I’m not one to share my angst. I don’t feel like that’s my life as a performer. You always show the best of you,’ she explained. ‘But I’m a human being like everybody else, and I suffer in silence at times.’

The pop star added that she had to think carefully about how many personal details she was willing to reveal to the public in her music. 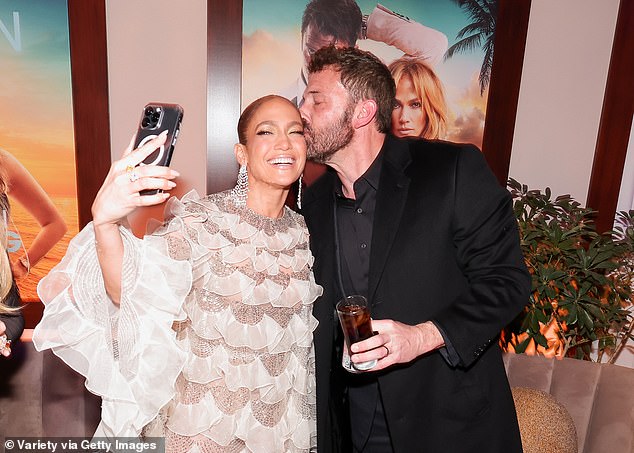 Opening up: The hitmaker is set to release her ninth studio album, This Is Me … Now, later this year. It’s a successor to 2002’s This Is Me … Then, which dealt with her first relationship with new husband Affleck; seen Wednesday

‘I’ve been thinking a lot about that — like, what parts of myself do I share with my audience? And what it means to be an artist and to be authentic,’ she continued. ‘And I feel like there are some things that need to be said and shared because I think, like you just said, it’s like, “Oh, you have it all together.”‘

The hitmaker is set to release her ninth studio album, This Is Me … Now, later this year, though a release date hasn’t yet been announced.

The LP is the spiritual successor to This Is Me … Then, which she released in 2002 during her first relationship with Ben.

The film will be available to stream on Amazon Prime on January 27. 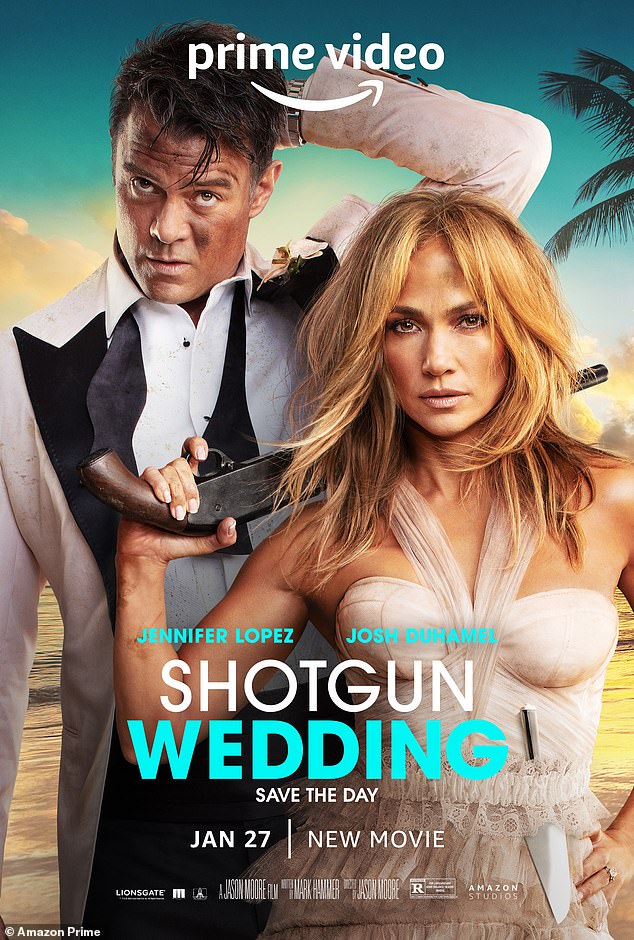