‘Utter scum’: Jeremy Vine, 55, reveals scammer told him to ‘f***’ off’ after trying to obtain his bank details fraudulently via WhatsApp

Jeremy Vine took to Twitter on Thursday to reveal an alleged scammer contacted him via WhatsApp in a bid to get his bank details.

The 55-year-old TV presenter used the social networking platform to reveal the person told him to ‘f*** off’ when his efforts were unsuccessful.

And the exchange also served as a warning to others to be vigilante if they are targeted in the same way. 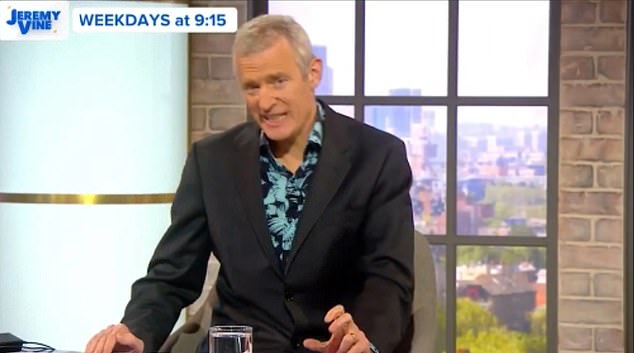 ‘Utter scum’: Jeremy Vine, 55, took to Twitter on Thurday to reveal scammer told him to ‘f***’ off’ after trying to obtain his bank details via WhatsApp (stock image)

Jeremy claimed the individual approached him while pretending to a bank manager.

They offered to pay him money at first, claiming that he had some funds which had accrued in a dormant bank account.

He was sure to check out the person’s credentials and labelled them ‘scum’ for preying on vulnerable people.

Having words: Jeremy claimed the individual approached him while pretending to a bank manager as he uploaded th e exchange on social media

Demonstrating: Jeremy explained what was going on to his followers as he warned them of what had happened to him

He penned on Twitter: ‘Getting scammed on WhatsApp. First thing — a message from someone with this profile photo, which looked suspiciously like one nicked off a stock images site.’

The photo of the profile, showed a woman in a purple colour top smiling.

He then shared screenshots of their exchange.

The person had written to Jeremy: ‘Good Afternoon. I am Roselyn, Senior Account Manager at OLYMPTRADE. 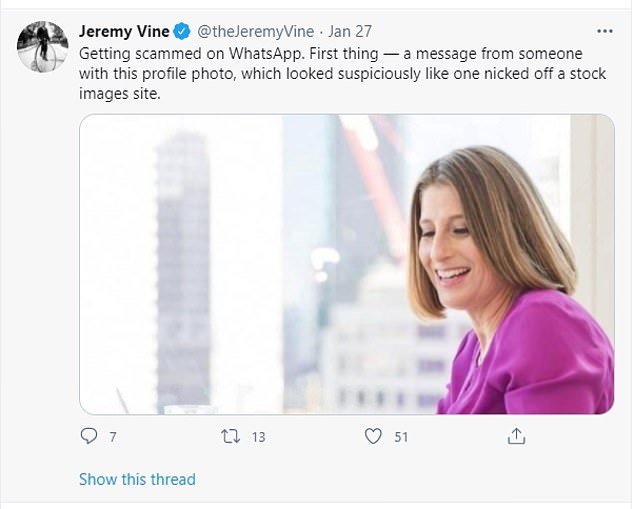 Keep your eyes peeled: Jeremy revealed the person who contacted him had used this generic stock image which served as a warning for him

‘I just tried to reach you on your phone not long ago but your number was unavailable, I was calling regarding your account with our company, which has accrued a total of £1250.01 profits but has now been dormant for a while now. May I know why you haven’t been active online?’

Jeremy replied to ask them if they could send the money to him.

They proceeded to ask him to confirm his account details and mobile number, before Jeremy asked them to provide their details first.

He added: ‘Olymptrade have no record of a Roselyn [surname not visible] – I just rang them – but they do have a Roselyn Mattheson, is that you?’ 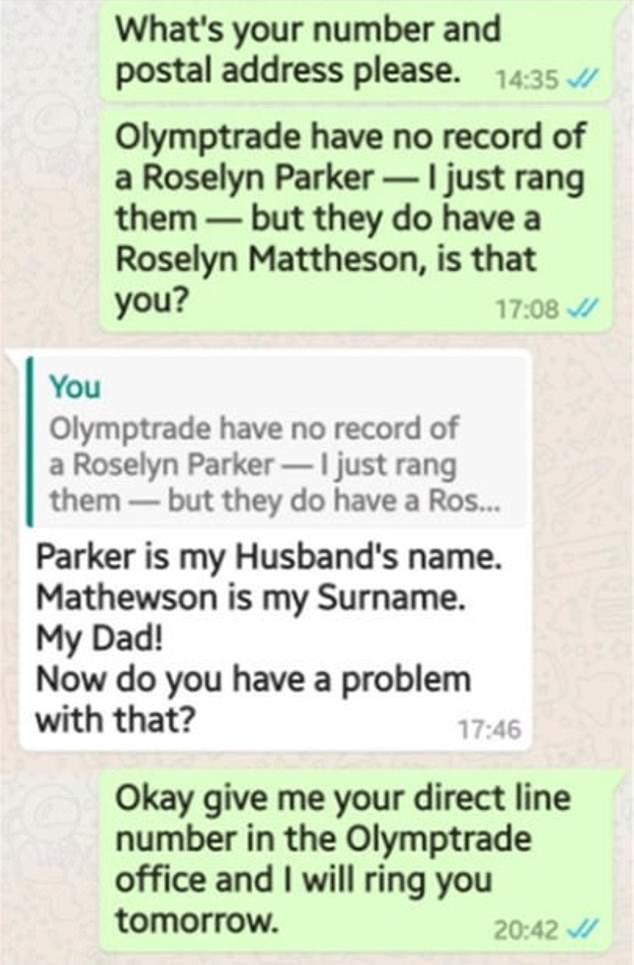 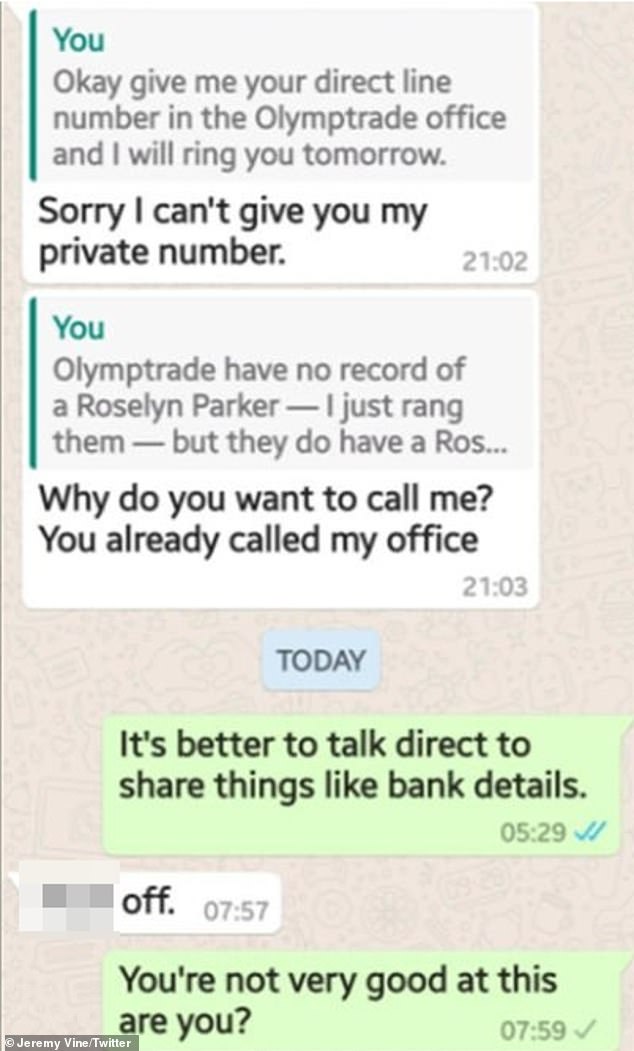 That did it! Jeremy showed how he had managed to call out the person who told him to ‘f*** off’

Jeremy told his followers that he had made the surname up in order to test the waters.

The alleged scammer then replied: ‘Parker is my Husband’s name. Mathewson is my surname. My Dad’s! Now, do you have a problem with that?’ [sic].

Undeterred Jeremy pressed on: ‘Okay give me your direct number in the Olymptrade office and I will ring you tomorrow.

Then the frustrated person replied: ‘F*** off.’

Jeremy jibed back: ‘You’re not very good at this, are you?’

Sharing the messages, he wrote: ‘ Utter scum who will try to con a pensioner probably.

‘I have never had an account with @OlympTrade but at least now they are aware of this.’

MailOnline has contacted Olymptrade for comment. There is nothing to suggest they were involved with the exchange.