Justin Bieber has been forced to postpone his remaining US shows from his Justice World Tour as he continues recovering from a rare syndrome which has caused him facial paralysis.

‘In light of Justin’s ongoing recovery, the remaining US Justice tour shows scheduled for June and early July will be postponed,’ a statement announcing the news read.

‘Justin continues to receive the best medical care possible, is upbeat about his recovery, and is looking forward to getting back out on the road and performing for his fans overseas later this summer.

‘Details on rescheduled US dates will be made public shortly. Refunds will be available at point of purchase. Tickets will be honored for all rescheduled dates.’ 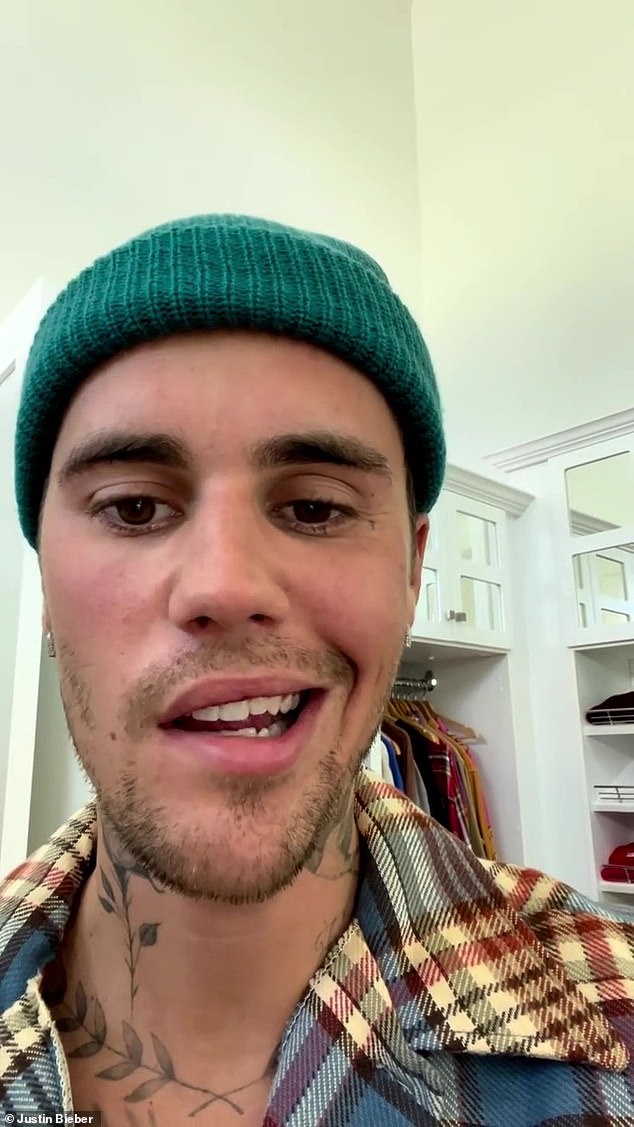 Justin’s website indicates he will resume his world tour on July 31, 2022 in Italy with his final stop being in Krakau, Poland on March 25, 2023.

This marks the second time Justin has been forced to postpone Justice Tour dates on account of his struggles with Ramsay Hunt syndrome, an ailment which has caused him temporary facial paralysis.

Last week Justin announced the postponement of several dates due to a ‘non-Covid related illness’ before revealing his facial paralysis.

According to the Mayo Clinic, the hearing loss and facial paralysis associated with Ramsay Hunt syndrome is temporary, however, can become permanent.

Justin’s right eye was unable to blink and the right side of his face did not move as he began the video saying: ‘Hey everyone Justin here, I wanted to update you guys on what’s been going on.

‘Obviously as you can probably see with my face. I have this syndrome called Ramsay Hunt syndrome and it is from this virus that attacks the nerves in my ear and my facial nerves and has caused my face to have paralysis.’ 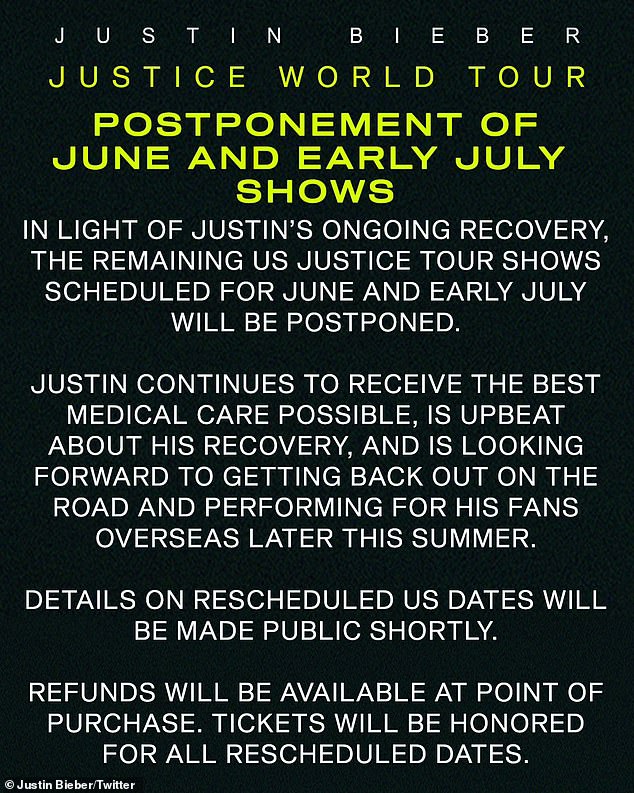 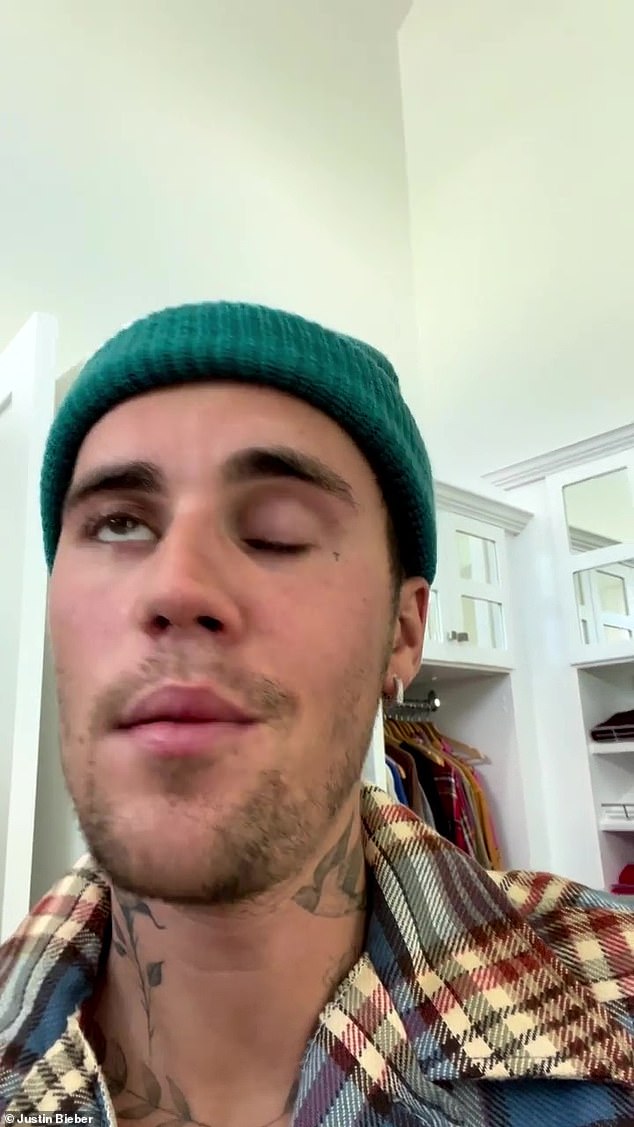 Justin later updated posted a sad update on his Instagram Story as he wrote: ‘Been getting progressively harder to eat which has been extremely frustrating, please pray for me [tearing up emoji]’.

In the clip posted on Friday, Justin showed the devastating effects to his diagnosis as he showed how his eye wasn’t blinking, can’t smile, and nostril will not move all on the right side of his face.

He explained: ‘So there is full paralysis on this side my face. So for those who are frustrated by my cancellations of the next shows, I’m just physically obviously not capable of doing them. This is pretty serious as you can see. 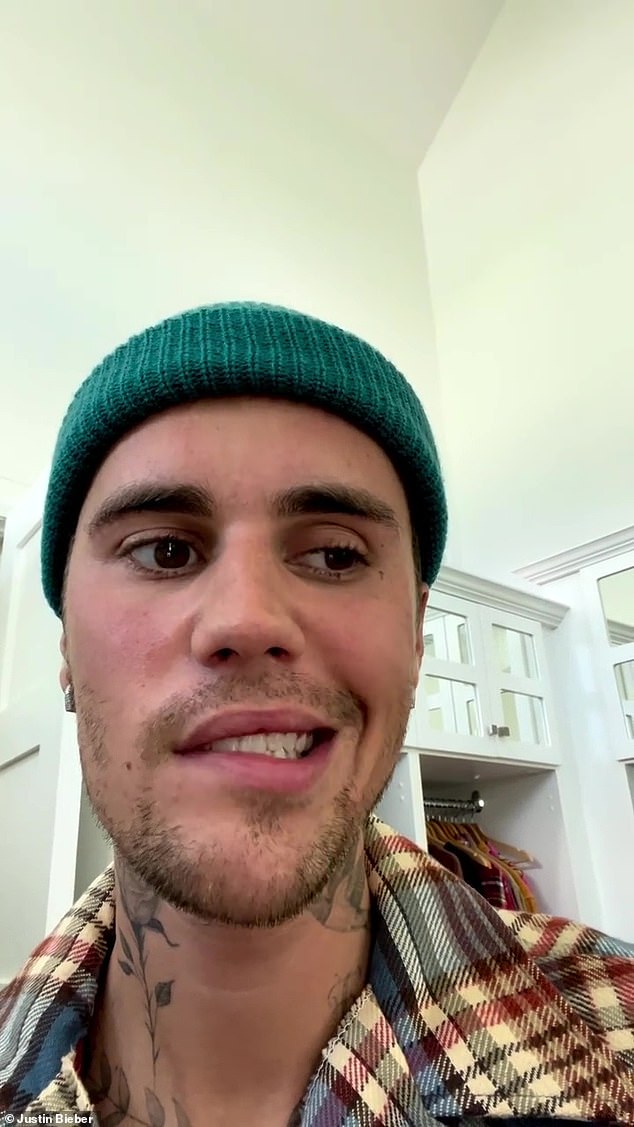 ‘I wish this wasn’t the case but obviously my body is telling me that I’ve got to slow down and I hope you guys understand. I will be using this time to rest and relax and get back to 100 percent so that I can do what I was born to do.’

According to FacialPalsy.org.uk if antiviral treatment is given within 72 hours of developing symptoms approximately 70 percent of people will experience a virtually full recovery and if damage to the nerve is mild then recovery should take place within a few weeks.

Justin concluded by saying that he is doing all that he can, including resting, in order to address the issue but was honest as he said he doesn’t know how long it will take him to recovery. 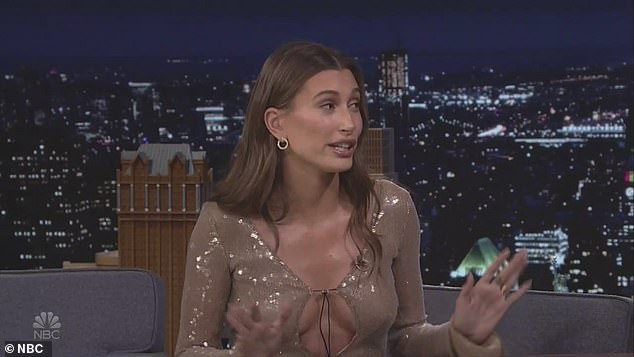 ‘He’s getting better’: Speaking on The Tonight Show Starring Jimmy Fallon, Justin’s wife Hailey Bieber revealed her husband was on the mend

He said: ‘I love you guys. Thank you for being patient for me and I am going to get better. I’m doing all of these facial exercises to get my face back to normal and it will go back to normal.

‘It’s just time, we don’t know how much time it will be, but it’s going to be okay. I hope and I trust God and I trust that this is all for a reason. I’m not sure what that is right now but in the meantime I’m going to rest and I love you guys. Peace.’

Speaking on The Tonight Show Starring Jimmy Fallon on Wednesday, Justin’s wife Hailey Bieber revealed her husband was on the mend.

‘He’s doing really well, he’s getting better every single day,’ the model, who has also struggled with her health in recent days, said.

‘He’s feeling a lot better. And obviously it was just a very scary and random situation to happen, but he’s going to be totally okay. And I’m just grateful that he’s fine.’

WHAT IS RAMSAY HUNT SYNDROME? THE RARE COMPLICATION OF SHINGLES THAT LEADS TO FACIAL PARALYSIS

Ramsay Hunt syndrome is a complication of shingles, caused by the same virus as chickenpox (VZV), that can lead to facial paralysis.

The virus becomes reactivated after laying dormant for years and causes inflammation and irritation on the facial nerves.

VZV is harmless unless it is reactivated and should this happen new symptoms will appear.

The virus can be reactivated when the immune system is weakened, and less able to fight off infection. Stress is often a trigger.

Figures suggest that five in every 100,000 adults in the US will develop RHS. It poses a similar threat in the UK, according to the NHS.

Children are rarely affected by RHS, as the complication most often affects adults in their 60s.

What are the symptoms?