Kanye West stepped out at Nobu Malibu rocking a long leather jacket and matching pants just a day after Christmas.

Kanye West, 44, emerged for dinner with friends just after Christmas. The Yeezy designer stepped out for a meal at Nobu Malibu on Dec. 26, rocking a long leather trench coat and matching black leather pants along with a chunky pair of shoes. He sported a dark blue hoodie — perhaps from his Gap x Yeezy collaboration — underneath The Matrix style jacket, as well as a black baseball cap. 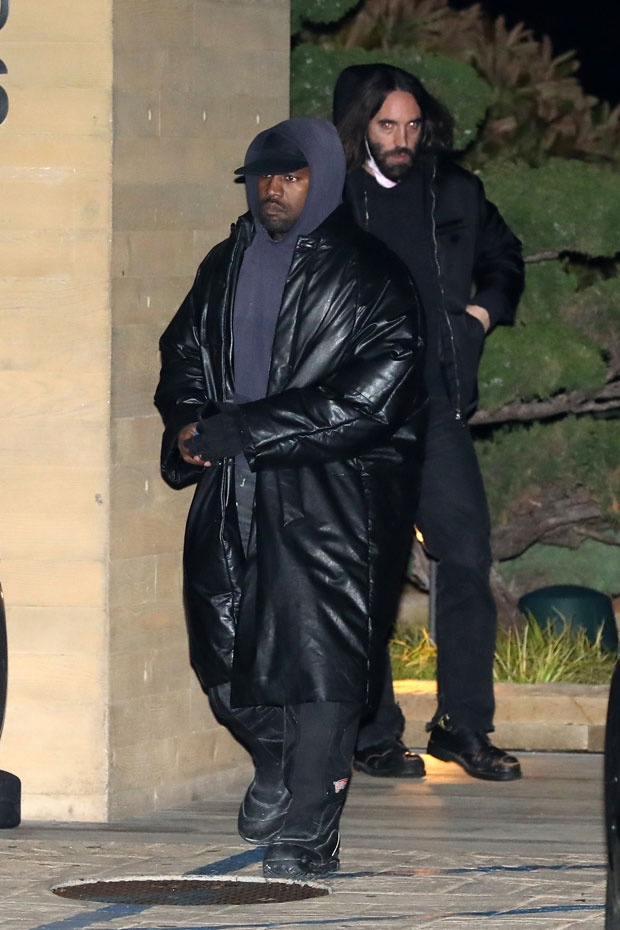 The outing comes amid Kim Kardashian‘s latest date with new beau Pete Davidson, 28, at the Beverly Hills Hotel. The SKIMS founder, 41, was dressed casually for the late lunch with the Saturday Night Live actor as the pair snuggled up into a booth inside the iconic Polo Lounge. An eyewitness told HollywoodLife EXCLUSIVELY that Pete sweetly had his arm around Kim during the date as they engaged in conversation. The pair were also matching in black and gray, with Kim in a gray shirt and Pete in a neutral toned beanie, while both opted for black sweatshirts.

Kim and Pete struck up a romance after hitting it off in early October when the KKW Beauty CEO hosted the show for the first time. On the episode, the Keeping Up With The Kardashians star and Staten Island native shared an on-screen kiss while playing Jasmine and Aladdin — quickly taking their chemistry off-screen.

Just over two weeks ago, Kanye made his latest public play to win back Kim amid their on-going divorce. During the Larry Hoover Benefit Concert with Drake on Dec. 10, Kanye changed the outro to “Runaway” to beg Kim to “come back” to him. “Baby, I need you to run right back to me…more specifically, Kimberly,” he said in front of the sold-out audience, which included Kim and their two older kids North, 8, and Saint, 6.

The stunt was one of many Kanye has pulled in an attempt to repair his marriage since Kim filed for divorce in Feb. 2021. The legal move came seven years after the two tied the knot at the Forte di Belvedere in Italy in a lavish ceremony. Ahead of the filing, Kanye controversially announced he was running for president and had taken to Twitter with a number of bizarre rants. More recently, Kim also motioned to become legally single.