They’ve regularly declared their devotion for each other since making things official last summer.

And Katie Price was treated to two stunning bouquets of flowers worth a whopping £10,000 from beau Carl Woods, 31, as the couple marked their first Valentine’s Day together in style.

The former glamour model, 42, appeared delighted as she received the expensive flowers arrangements, with one even boasting a 22ct gold rose. 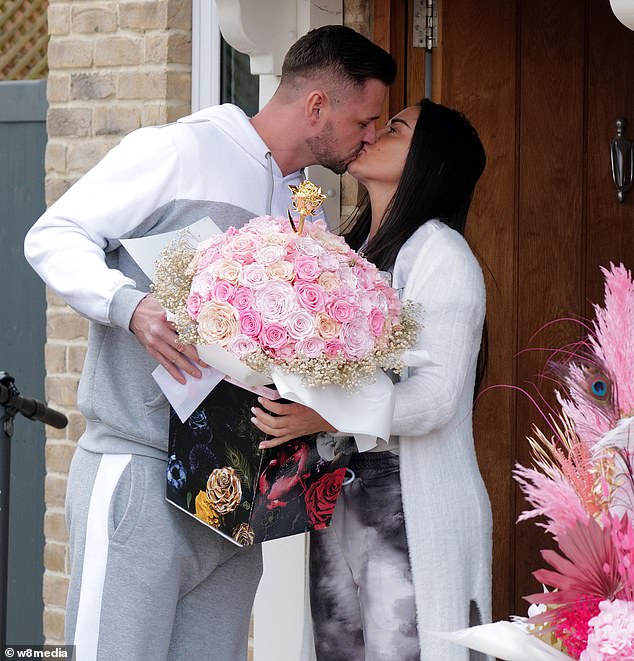 Spoilt! Katie Price was treated to two stunning bouquets of flowers from her beau Carl Woods as they marked their first Valentine’s Day together

Katie cut a casual figure as she accepted the delivery on Friday, wearing some tracksuit bottoms and a long white cardigan.

The star wore her long brunette locks down and beamed a smile as she showed off the latest in a line of thoughtful – and pricey – gifts.

Each of Katie’s bouquets from Endura Roses are thought to be worth a whopping £5000 while the mother-of-five also received a £500 luxury hamper from her beau. Stunning: The former glamour model, 42, looked delighted as she showed off her flowers

Katie was also seen receiving an impressive bunch of gold and pink balloons  in another display of devotion from Carl.

‘Endura are the makers of the everlasting Rose are the florists behind the world’s most expensive Valentines bouquet… Katie is a very lucky lady!’

On Friday, the hunk also teased a Valentine’s surprise for his other half, as he revealed something was on the way for her ahead of the romantic day.

The couple, who filmed an Instagram Story together in a car, also revealed that Carl would be celebrating his birthday the following day. 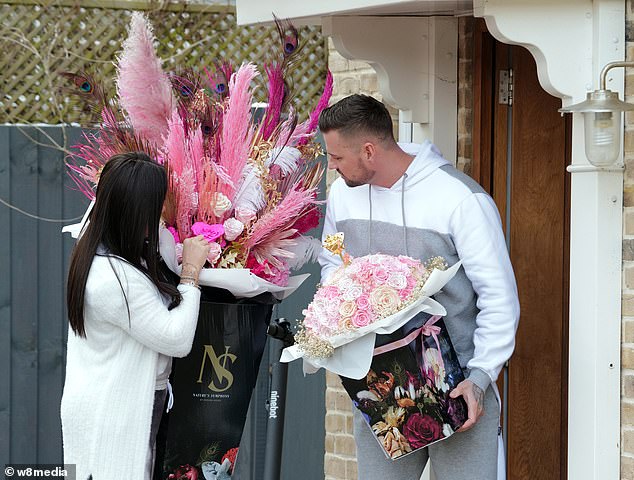 Beautiful blooms: One bouquet boasted large pink and red flowers while the others had a 22 karat gold rose sticking out the top 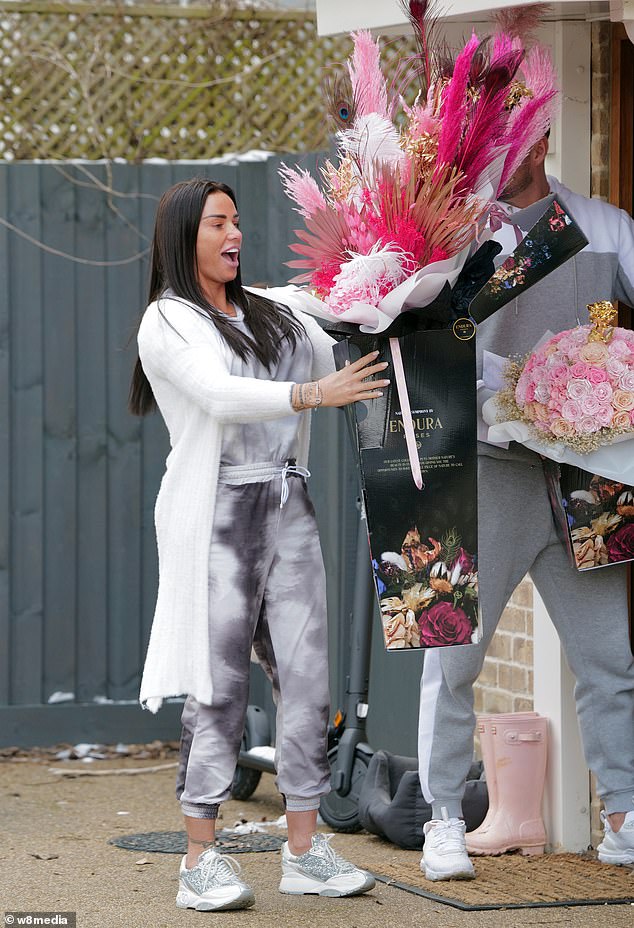 Delighted: Katie could not stop smiling as she looked over her romantic gifts 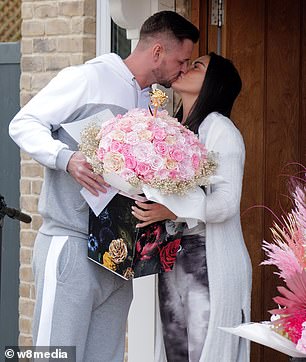 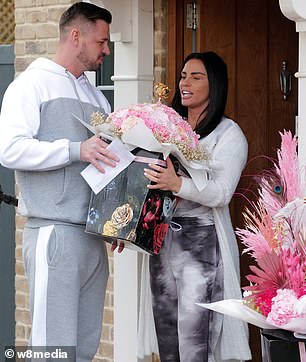 Impressed: She shared a kiss with Carl after admiring the romantic roses on her doorstep 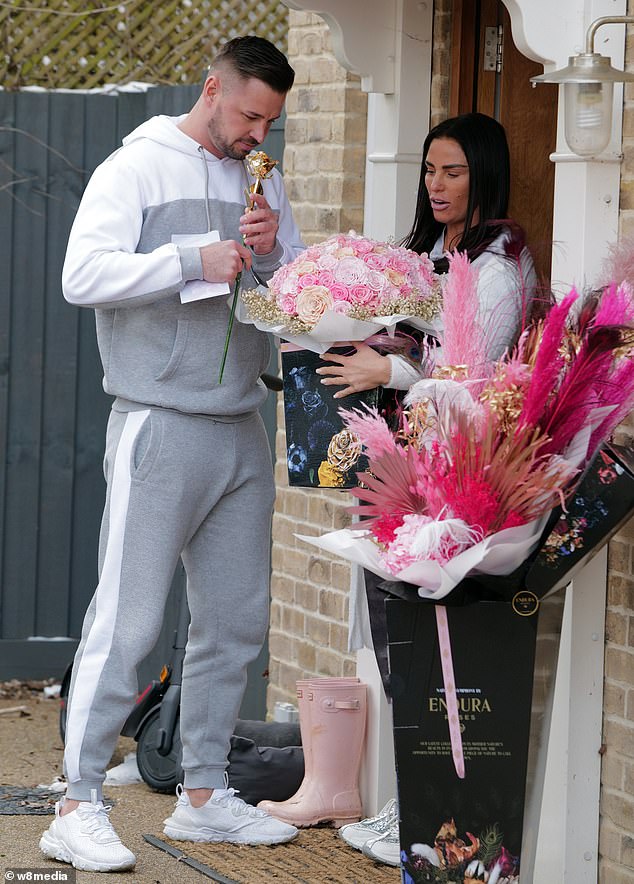 Smelling the roses: Carl had a sniff of the gold flower after surprising his love 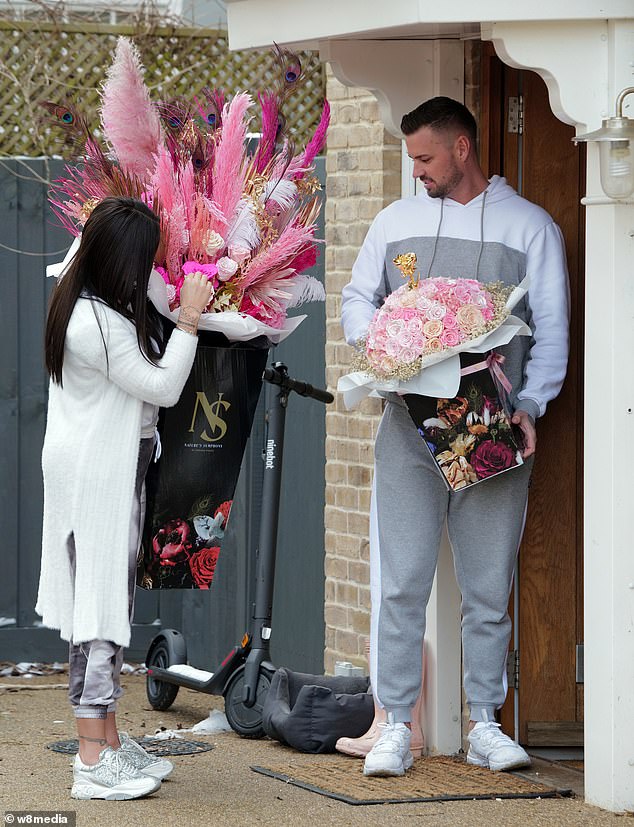 Where are you going to put those?! Katie’s biggest box of flowers was almost as tall as her

Katie opted for a casual look while chilling at home, and could be seen wearing a graphic print beige hooded jacket with a pair of matching sweatpants.

The mother of five appeared to be going make-up free and wore her brunette locks in a loose straight style, after recently revealing her real short hair.

Meanwhile, Carl also opted for comfortable clothing as he sported a pale blue hooded jacket with a pair of grey tracksuit bottoms.

The couple, who live together at Katie’s pad, also ensured they were covered up with coronavirus masks while taking receipt of the delivery.

Katie’s loved-up display comes shortly after she heartbreakingly spoke about how she planned to commit suicide at the beginning of last year after reaching ‘crunch point’ before entering rehab. 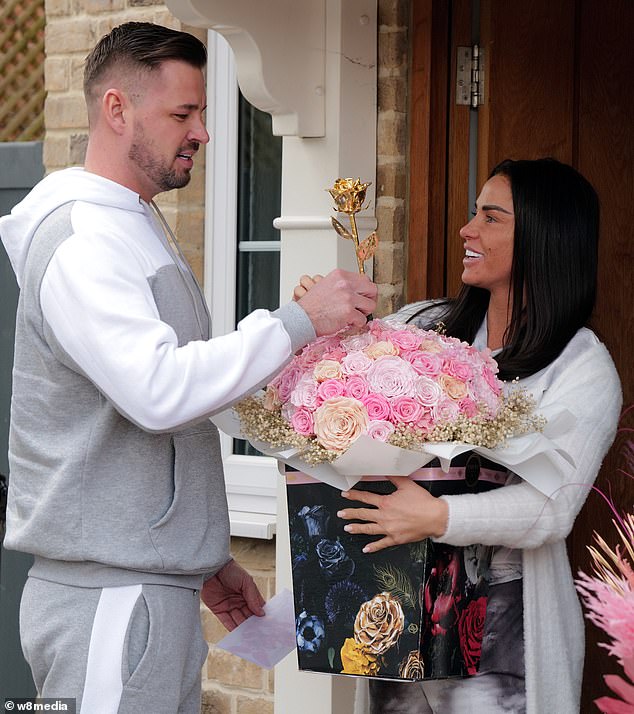 Besotted: Katie loving stared into Carl’s eyes as he explained her romantic gift 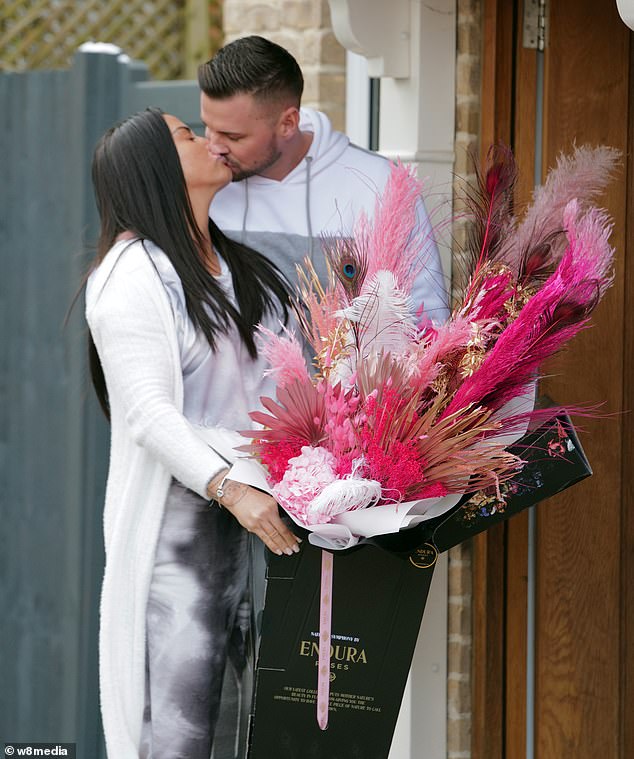 Wow: Katie thanked her beau with a kiss outside their home 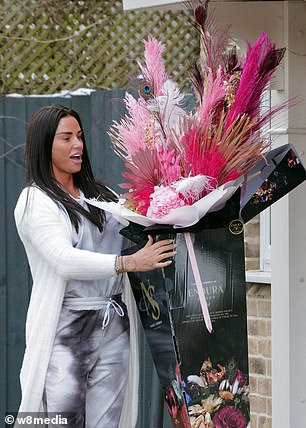 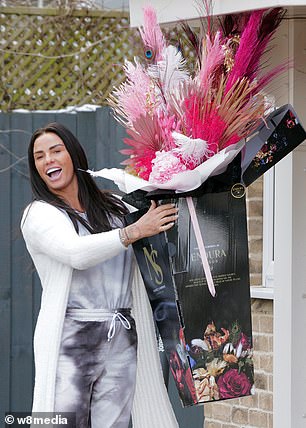 Can’t believe it! She appeared to be in shock after taking delivery of the huge bloom display 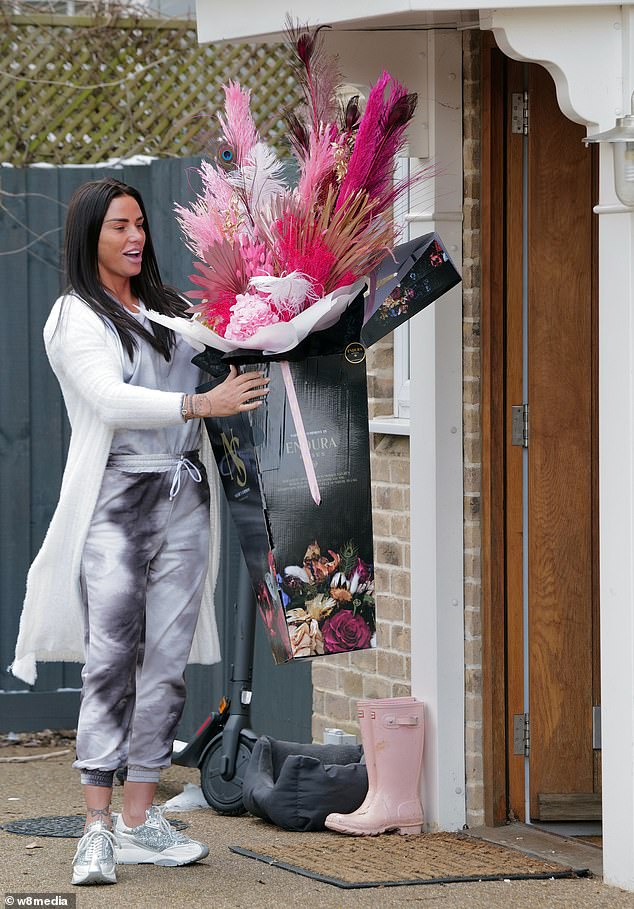 Pricey for Pricey: The two stunning pink bouquets are though to cost a total of £10,000 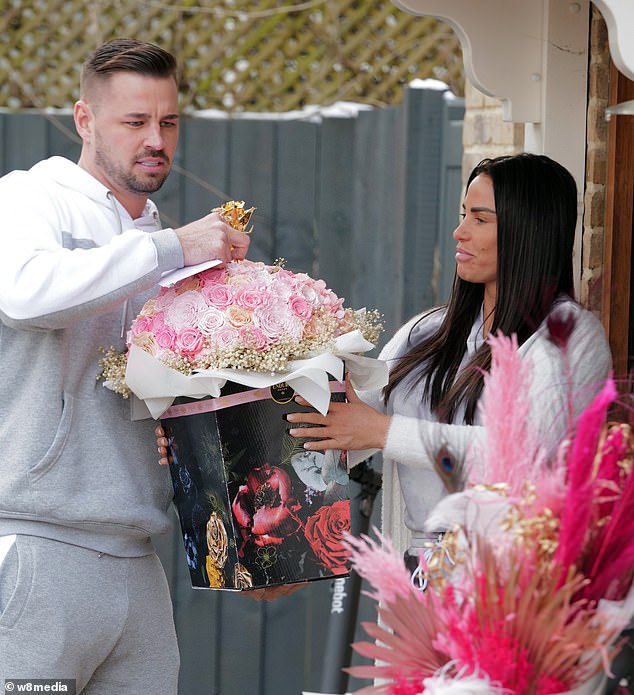 Taking it apart already! Carl pulled out the centre piece gold rose while Katie looked on

The TV personality opened up about her mental health struggle during an appearance on BBC Northern Ireland’s Nolan Live on Wednesday.

Katie told how she checked herself into private mental health facility The Priory in London at the beginning of 2020 after having suicidal thoughts.

While opening up about her own battle, Katie also discussed her 18-year-old son Harvey’s disabilities, which were explored in their new documentary.

During the chat, host Stephen Nolan asked the mother-of-five how she manages to stay strong and whether she has ever felt overwhelmed.

Answering honestly, Katie revealed: ‘You just have to get on with it. I went to The Priory last year, because I had a lot of things to deal with, and I think speaking to a therapist just helps you prepare for it. 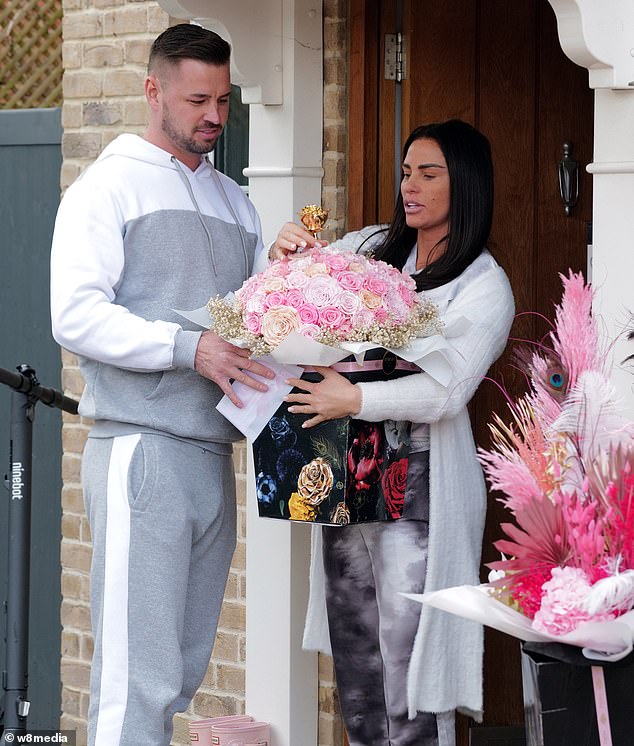 Casual: The couple both cut relaxed figures in tracksuits as they looked over the flowers 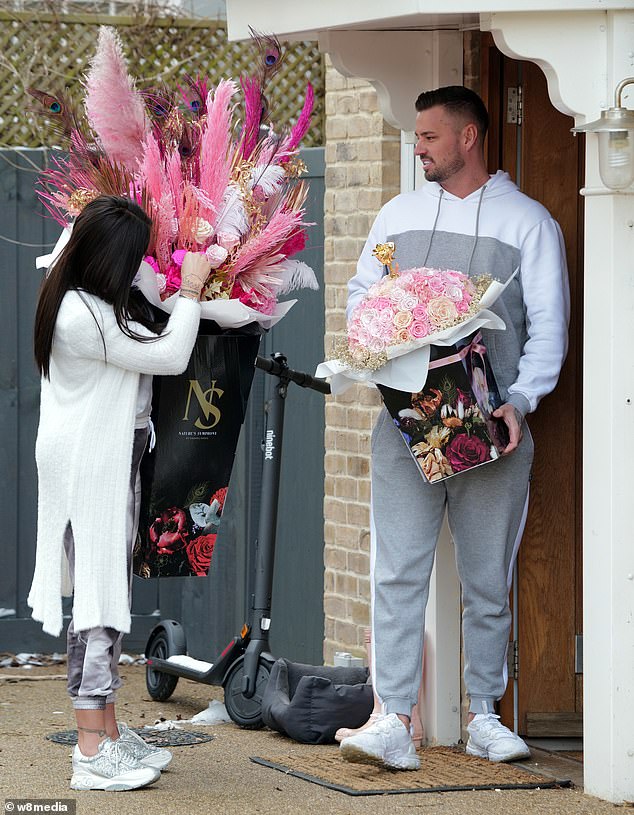 Pretty pinks: A selection of red, pink and cream roses were used in the Endura Roses displays 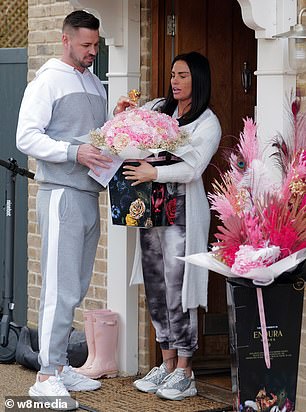 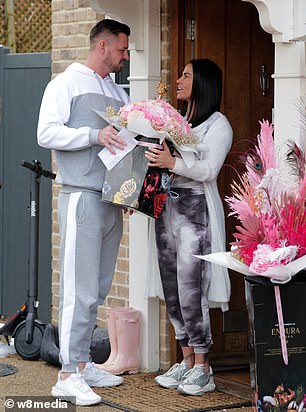 Happy: Katie wore her long brunette locks down and beamed a smile as she showed off the latest in a line of thoughtful – and pricey – gifts 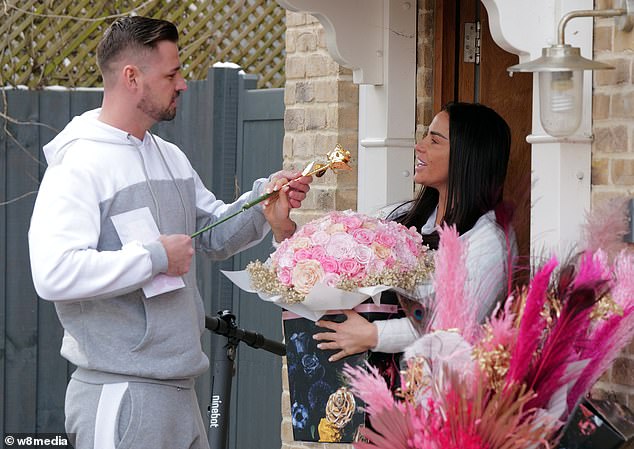 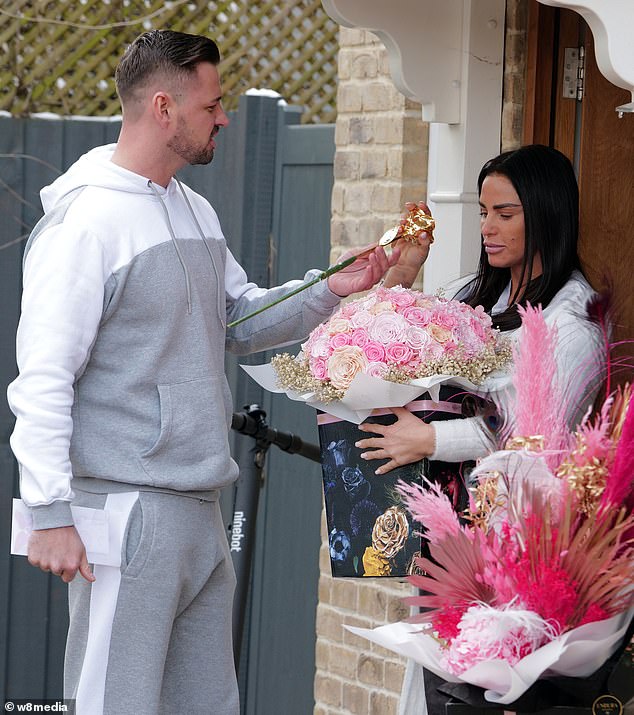 Showing it off: Delighted Katie wrapped her arms around the smaller bouquet 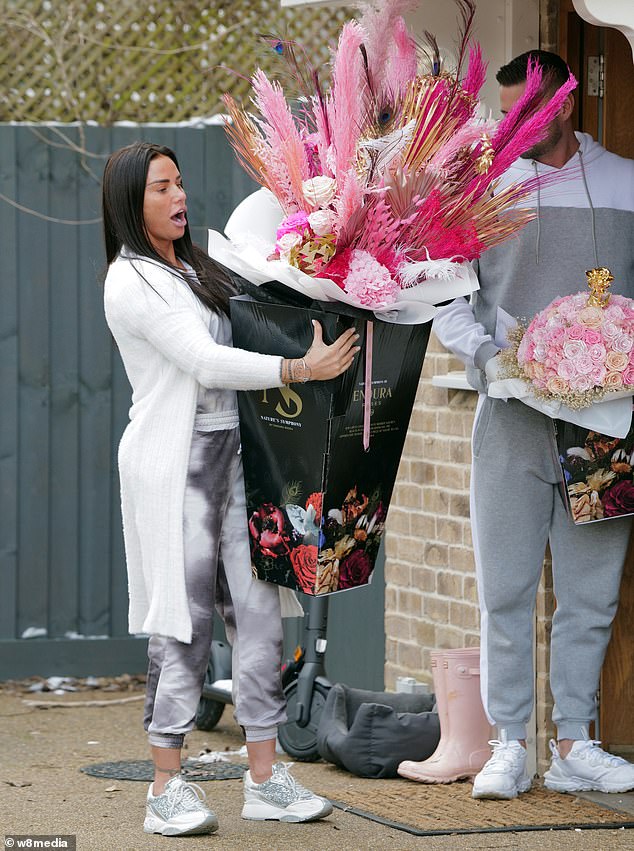 Amazing! The beautiful flowers come after a difficult few months for Katie following her breaking both her feet and being left struggling to walk in an accident in Turkey

‘I say to anyone out there, if you are suffering with mental health, and this pandemic doesn’t help, just talk to someone – if you’re feeling low, talk to someone.

Nolan then asked: ‘Do you mind opening up about your mental health? What was crunch point for you?’

Katie heartbreakingly admitted: ‘I wanted to commit suicide. I planned it, I did everything… Everything was on top of me, it was a build up.

‘I’m only human, I’m strong but there’s only so much you can take and I could have either committed suicide or got help.’

Katie admitted that her children, Harvey, Junior, 15, Princess, 13, Jett, seven, and Bunny, six, were her reason for seeking help at her lowest ebb. 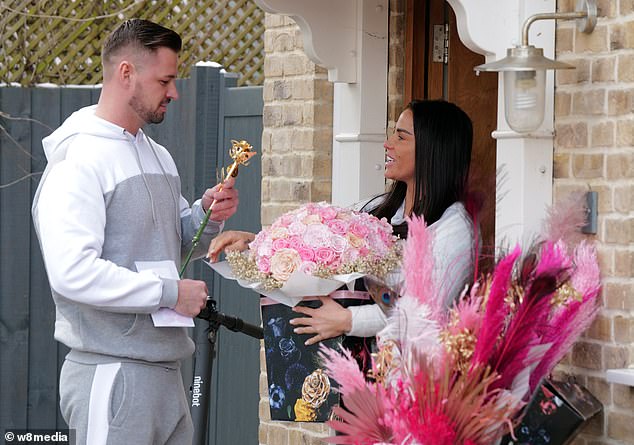 Doting: The couple have been inseparable since confirming their romance last summer 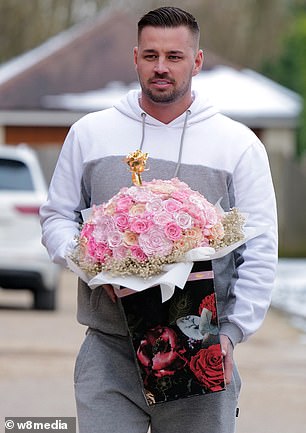 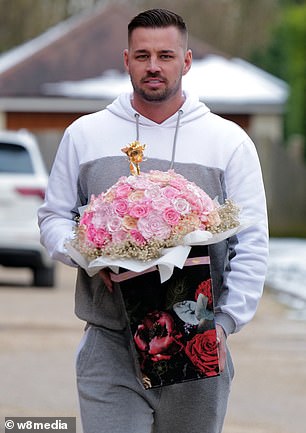 Special delivery! Carl looked excited as he headed towards Katie with the bouquet 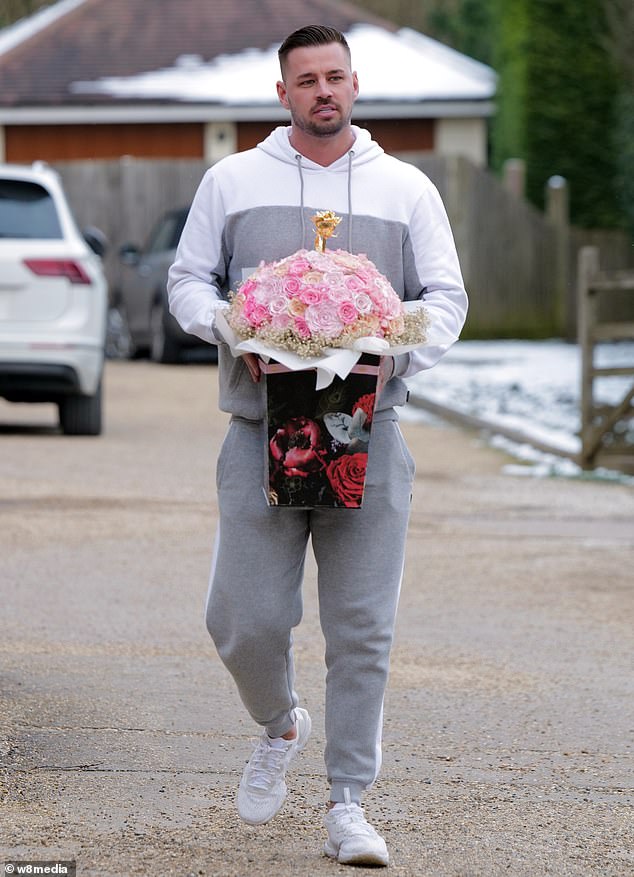 Here he comes: Carl hand delivered one of the bouquets which contained the gold rose