EXCLUSIVE: Katie Price’s fiancé Carl Woods is ‘furious’ after her ex-husband Kieran Hayler said she deserved to be locked up for drink and drug-fuelled car crash

Katie Price’s fiancé Carl Woods is ‘furious’ after her ex-husband Kieran Hayler said she deserved to be locked up after her drink and drug-fuelled car crash.

In an explosive interview Kieran, 34, said Katie, 43, – who on Wednesday was given a suspended sentence in relation to the incident – needed to be behind bars and that a custodial sentence would send a clear message to their two kids.

Katie recently completed her court assigned rehab order following the car accident on September 28, after which she tested positive for alcohol and Class A drug cocaine. 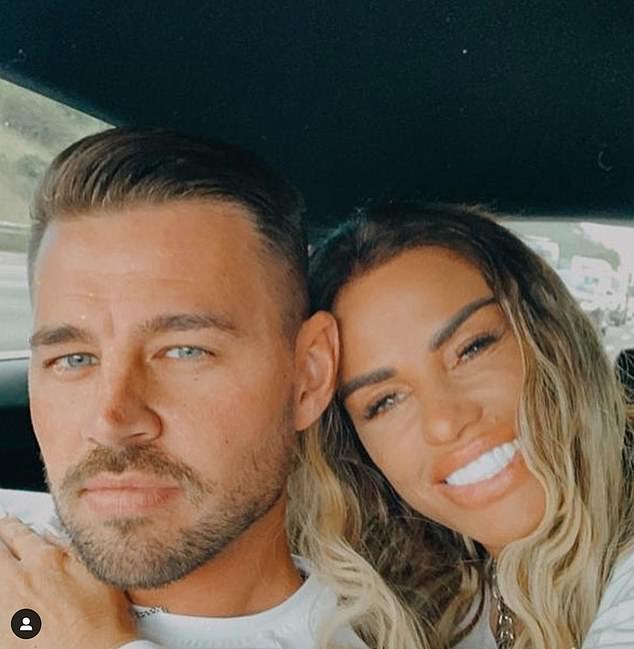 Angry: Katie Price’s fiancé Carl Woods is fuming after her ex-husband Kieran Hayler said she deserved to be locked up after her drink and drug-fuelled car crash (Katie and Carl are pictured)

Kieran said of the decision: ‘It is one of the most serious things you can get done for on the road, short of killing someone. It is so serious. Someone will get hurt if Katie is allowed to carry on the way she is. When I saw she had been arrested, I thought, ‘Oh no, not again’. It is just always so much drama. A lot of drama.’

Now MailOnline can reveal how Carl has branded the comments ‘low’ and has accused Kieran of ‘kicking Katie while she’s down’.

A source close to Carl, who was at Katie’s side in court earlier this week, said: ‘He was furious when he saw those comments. Katie knows she behaved terribly and has made a public apology for what she did. 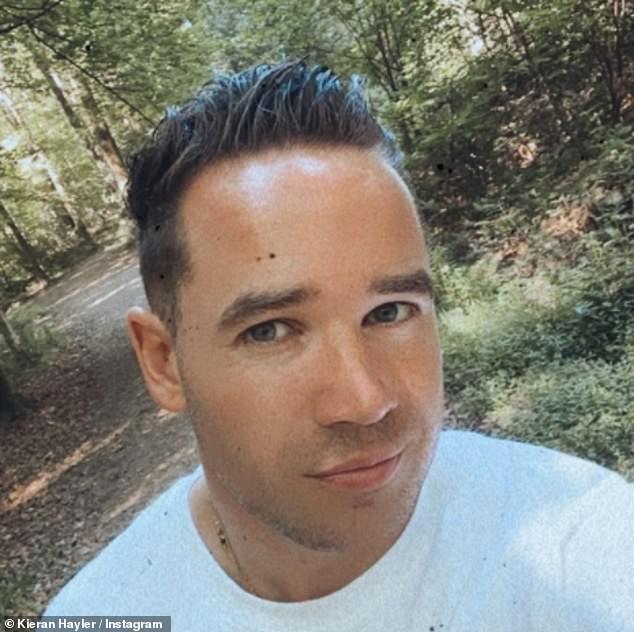 Opinions: In an explosive interview Kieran, 34, (pictured) said Katie, 43, needed to be behind bars and that a custodial sentence would send a clear message to their two kids

‘Carl questions what kind of man publicly calls for the mother of his children to be banged up. If their paths cross he’ll make clear exactly what he thinks about the way he’s carrying on. He’s kicking her while she’s down and it’s not on.’

A representative for Katie has been contacted by MailOnline for a comment.

On Thursday Katie issued a grovelling apology after avoiding jail for her drug and booze-fuelled car crash.

She said she was ‘incredibly sorry’ and was working hard to address her mental health issues.

Accident: Katie flipped her BMW on its side on a country lane near her home in West Sussex on September 28 at 6.20am

She said: ‘It’s been a really difficult time and I’m incredibly sorry for my actions – I’m sincerely grateful nobody was hurt.’

The mum-of-five added: ‘I’m spending time getting better – mental health is a hidden illness and can strike at any time.’

Campaigners were furious after the mum of-five walked free from court on Wednesday, despite crashing her Range Rover near her Sussex home in September during her fifth driving ban.

She told police at the scene: ‘I took drugs. I should not be driving. I admit it all’. 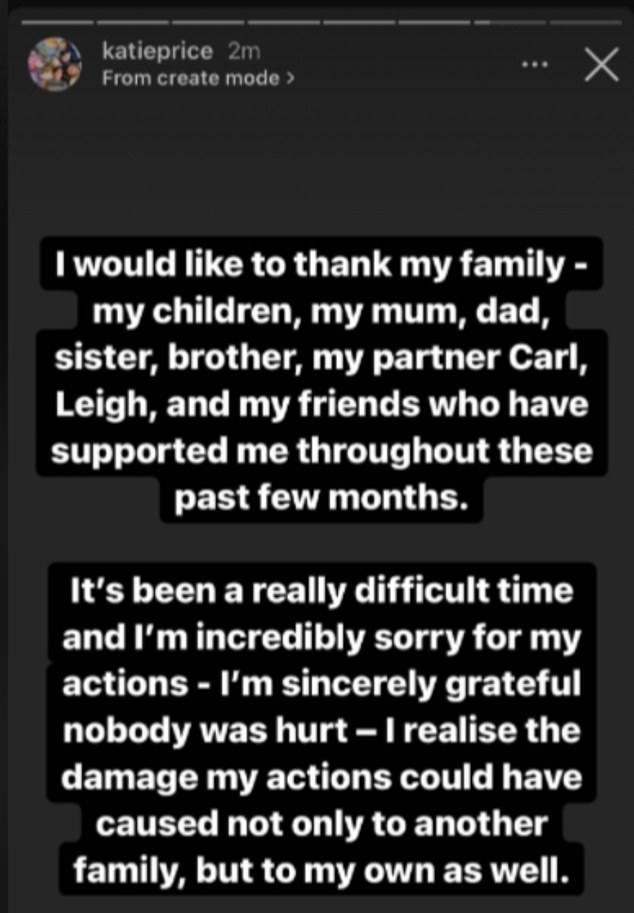 Having her say: Katie released a statement via her Instagram page in which she apologised for the incident and said she was ‘sincerely grateful nobody was hurt’ 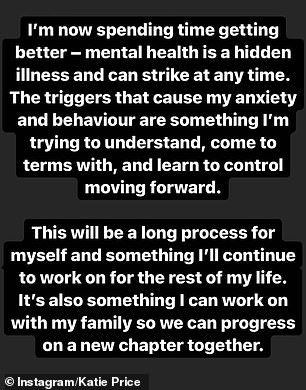 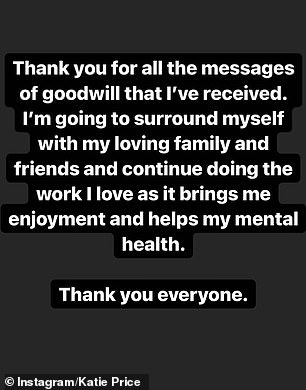 Apology: She said she is now working to understand the ‘triggers that cause my anxiety and behaviour’

But Katie, 43, escaped with a 16-week suspended sentence for drink-driving after going into rehab.

MailOnline can also reveal Katie is vowing to go on a New Year detox to clean up her life.

‘She’s kicked the booze and is determined to live her life in the right way. Katie knows she was lucky and has been given a second chance. She’s going to do all her best to make the most of it.’

Earlier this week we also told how she has vowed to ‘turn things around in 2022’ after having an emotional reunion with her family last night. 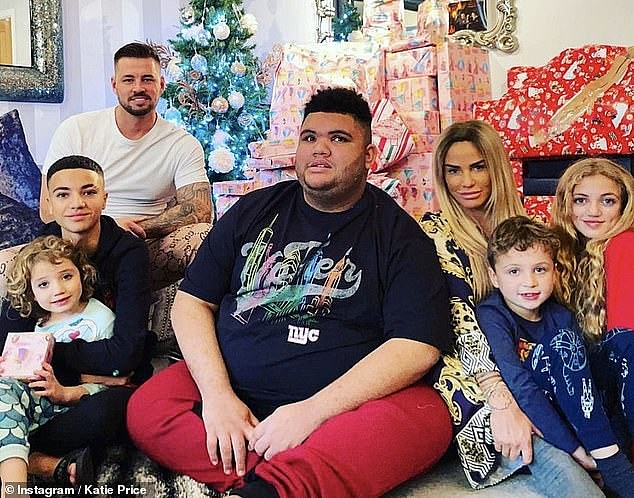 Family: Katie pictured with her children, with whom she shared an emotional reunion on Wednesday night hours after being handed a suspended prison sentence for drink driving

The former glamour model was spared jail yesterday meaning she will be able to spend Christmas with her children.

But sources close to Katie say she has been left ‘terrified’ by how close she came to being banged up and that she is determined to use the experience to transform her life.

‘Katie knows she is lucky not to be waking up in a prison cell this morning,’ our source said.

‘When she got home last night she broke down. There were tears. All the emotion came flooding out. The last few days have been hard. Everyone seemed to be saying she would escape jail but Katie wasn’t sure and stood up in the dock with her heart in her mouth.

‘But she is determined to learn from what’s happened and turn things around in 2022.’

Her family however remain concerned for Katie, MailOnline understands.

‘They are naturally relieved she wasn’t sent to prison,’ our source added. ‘But there is a concern that Katie checked out of rehab a bit early and that she hasn’t yet given herself enough time to recover.

‘All everyone who cares for Katie wants is for her to get back to her best and to be happy and healthy.

‘Carl has told everyone he will be stepping up. He was prepared to stand by Katie whatever happened in court. But Carl can only do so much. The only person who can help Katie, is Katie, and she needs to step up now and make this second chance she’s been given count. That’s what she is determined to do but this is Katie and time will tell.’ 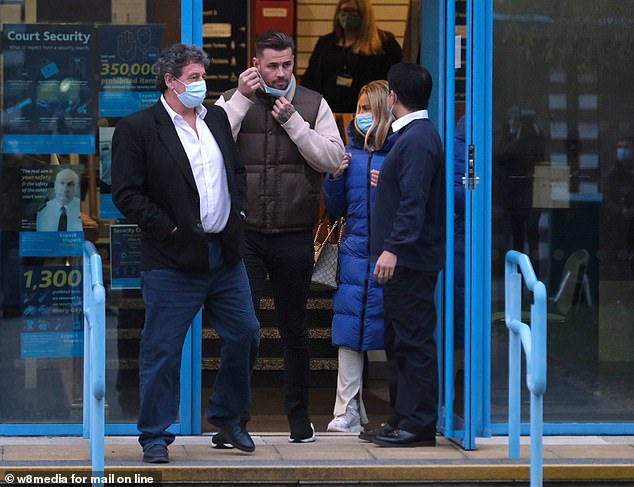