If modeling was an Olympic sport, there’s no doubt Kendall Jenner would take the gold. Fortunately, the “Keeping Up With the Kardashians” star can still relish in the momentous celebrations considering her boyfriend Devin Booker is an athlete in the 2021 Tokyo Olympics. Booker, a professional NBA basketball player for the Phoenix Suns, made his Olympic debut for the USA Men’s team alongside fellow superstars Kevin Durant, Jerami Grant, and Bam Adebayo against France during the legendary games in late July, per AZ Central.

Jenner may not be front and center at Booker’s games in Tokyo, but the supermodel loves cheering her man on at his more local events. E! News reported Jenner was spotted attending Booker’s NBA Finals on July 17 in Phoenix, where she seemed “really engaged in the game,” an eyewitness told the outlet. “She would stand up and cheer every time Devin scored. It was so cute! She held her hands on her head at the end of the first quarter.”

When Jenner and Booker first started dating in June 2020, the two were extremely tight-lipped about sharing details of their romance. However, after multiple public appearances, she’s slowly started posting pics of the pair on Instagram. Most recently, Jenner showcased her love for her beau by celebrating his win at the Olympics. Keep scrolling for more on the brunette bombshell’s reaction to Booker’s medal. 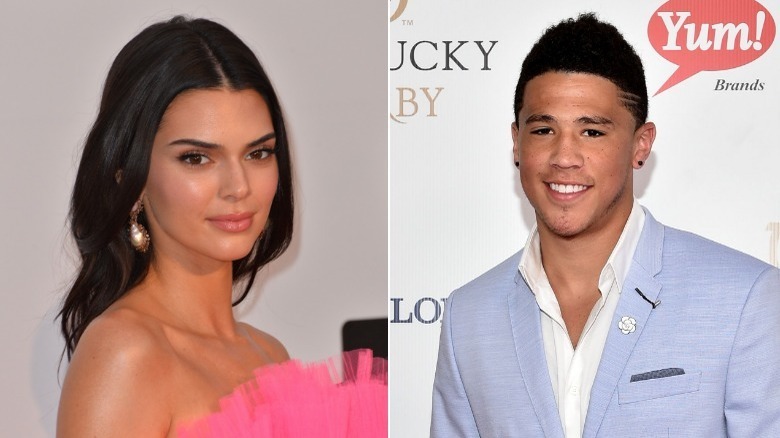 So proud of her honey! Kendall Jenner congratulated her boyfriend Devin Booker following his gold medal win in the 2021 Olympics in Tokyo. Posting a photo of the Michigan native, taken from behind while on the court following team USA’s victory, the fashion model simply captioned the Instagram Story with a gold medal emoji (via Page Six). Booker and his teammates earned the fourth straight gold medal for the USA, defeating France in the finals with a score of 87 to 82.

Jenner and the handsome hunk haven’t flaunted their relationship much since becoming a couple last summer, but “this is the happiest Kendall has been in a relationship,” an insider told E! News in April 2021. “It’s getting more and more serious and she is very happy.” Fortunately for the socialite, her family — including matriarch Kris Jenner — “loves him and knows how good they are for one another,” another source told the outlet.

“They love having Devin around and have welcomed him with open arms,” the E! insider continued, noting Jenner’s bond with Booker is different. Her past boyfriends include Ben Simmons, Blake Griffin, and A$AP Rocky (via Us Weekly). “They love seeing Kendall so happy with someone who brings out the best in her. It’s exciting for everyone to see her in such a great relationship.”