Khloe Kardashian was on Instagram bright and early Monday morning with a positive message for her 172 million followers.

The TV star was seen in a black tank top with her hair slicked back as she told her fans to be ‘healthy.’

This post came just as she shared an image of daughter True in a leopard print swimsuit while on the beach. 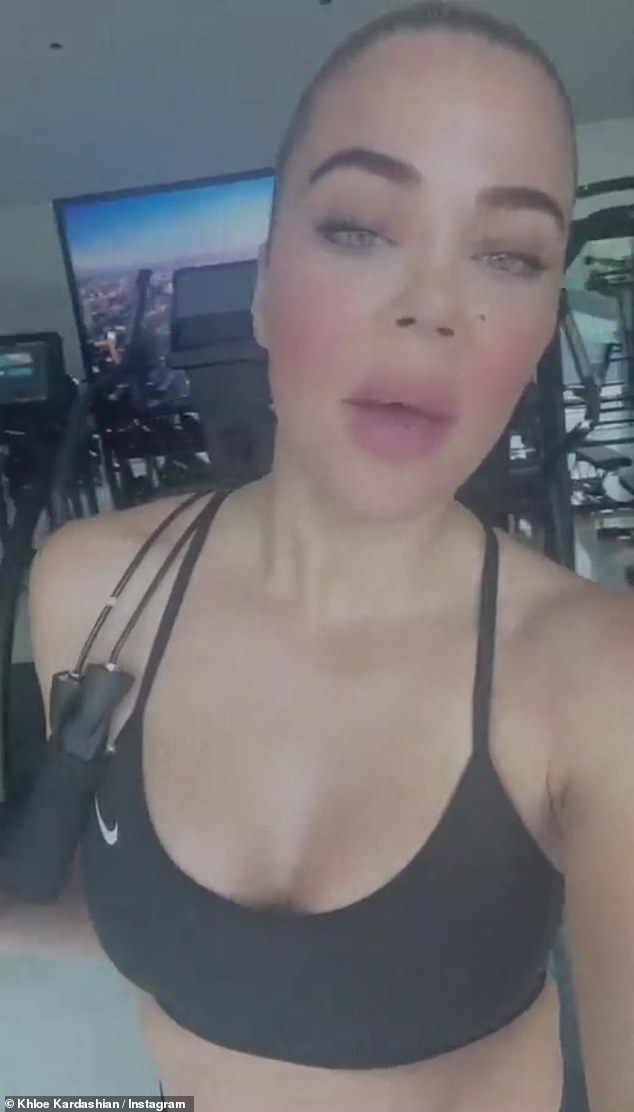 Up early! Khloe Kardashian was on Instagram bright and early Monday morning with a positive message for her 172 million followers. The TV star was seen in a black tank top with her hair slicked back as she told her fans to be ‘healthy’

Khloe wanted to keep her message positive for her followers.

‘Happy beautiful, healthy Monday,’ she began in the seconds-long Instagram story. ‘I want everyone to live a prosperous, healthy, happy life.’

The Good American designer advised, ‘Everyone self-motivate. Let’s encourage, let’s uplift one another. Have a beautiful week,’ before blowing a kiss into the camera.

Just before 7am she posted a picture of a full bottle of orange-infused water on her Instagram story. 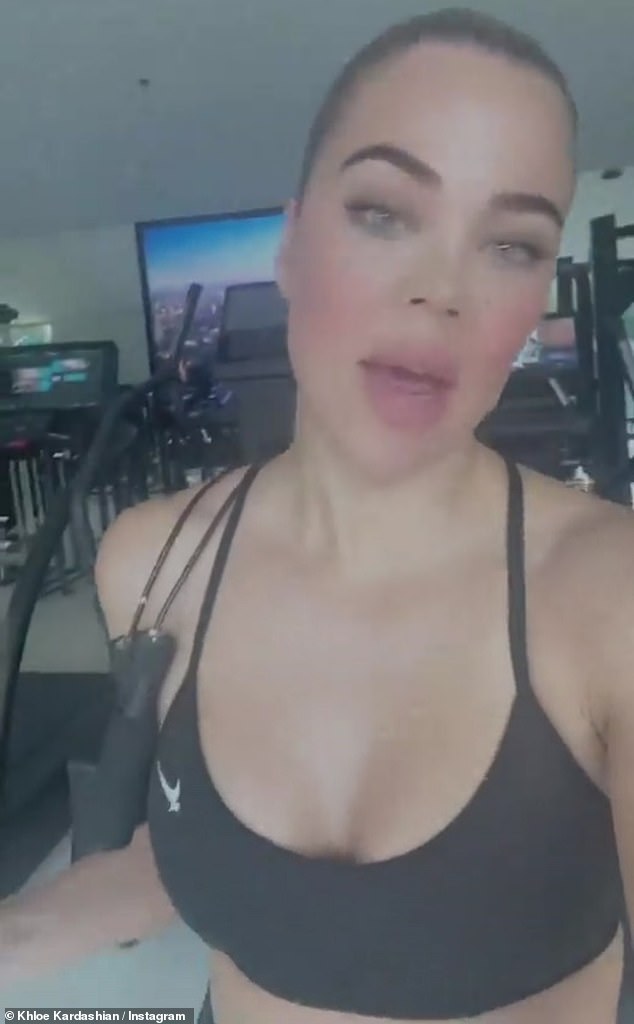 Picture of positivity: The Good American designer advised, ‘Everyone self-motivate. Let’s encourage, let’s uplift one another. Have a beautiful week,’ before blowing a kiss into the camera 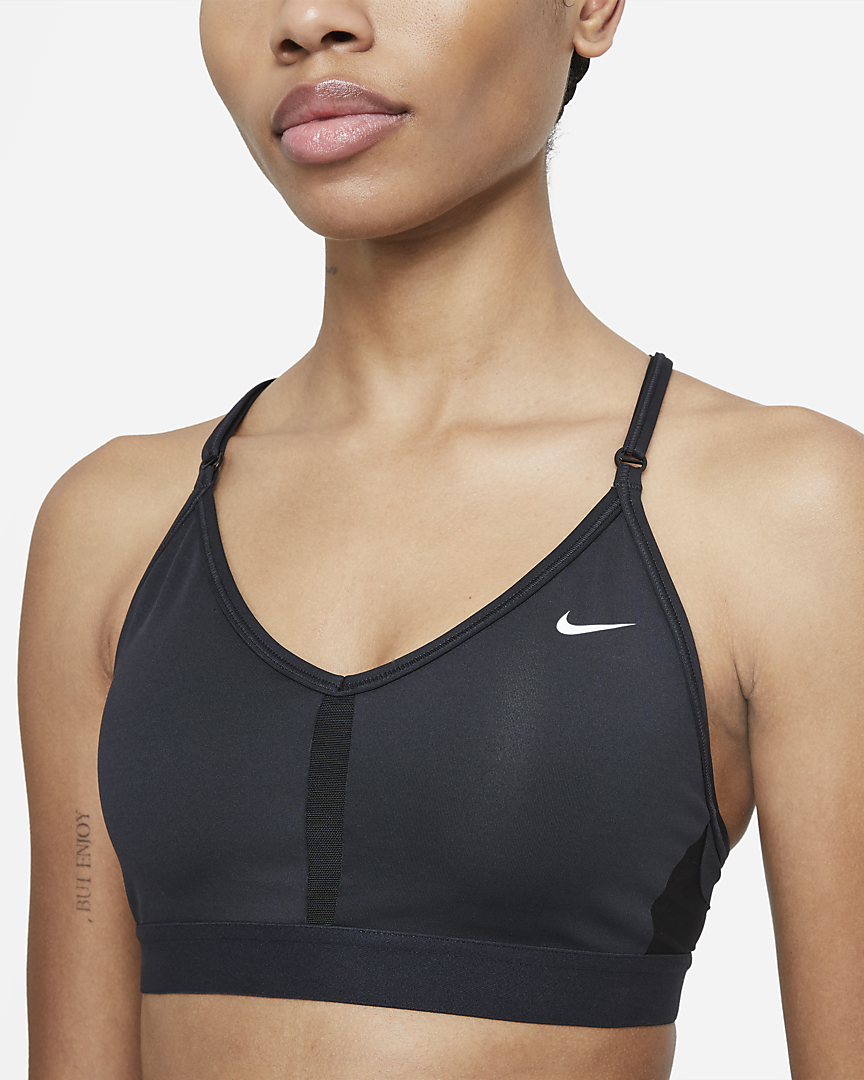 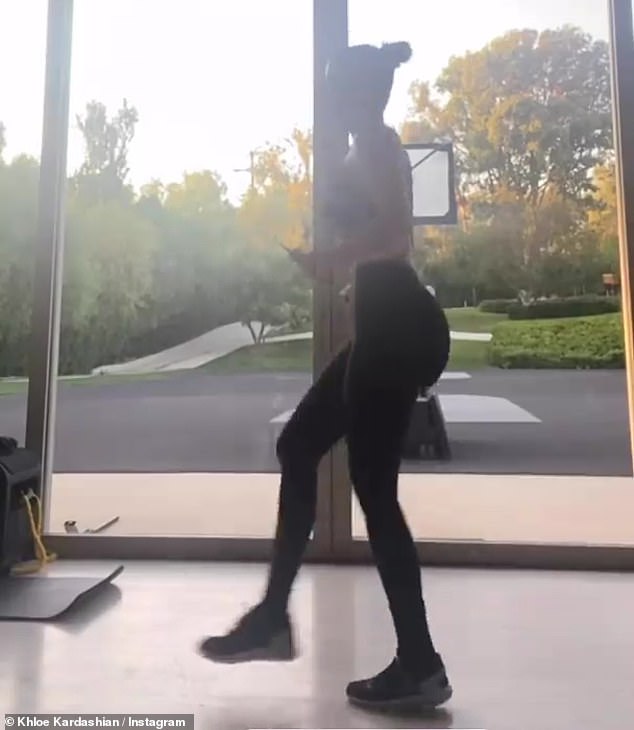 Get cracking: The cover girl was also seen in the middle of her workout in her sneakers

The big bottle was marked with hours and motivations like, ‘Don’t give up’ and ‘almost finished.’ Not long after, Koko posted a progress photo with the water line significantly lower as she drinks her way through the day.

Later she posted new photos of her young daughter, True, on a beach wearing a leopard print bathing suit. ‘My moana,’ she wrote under the pics.

The Keeping Up with the Kardashians star struck an optimistic tone on the internet on Sunday as well, just one day after news on/off ex Tristan Thompson had been traded to the Sacramento Kings. 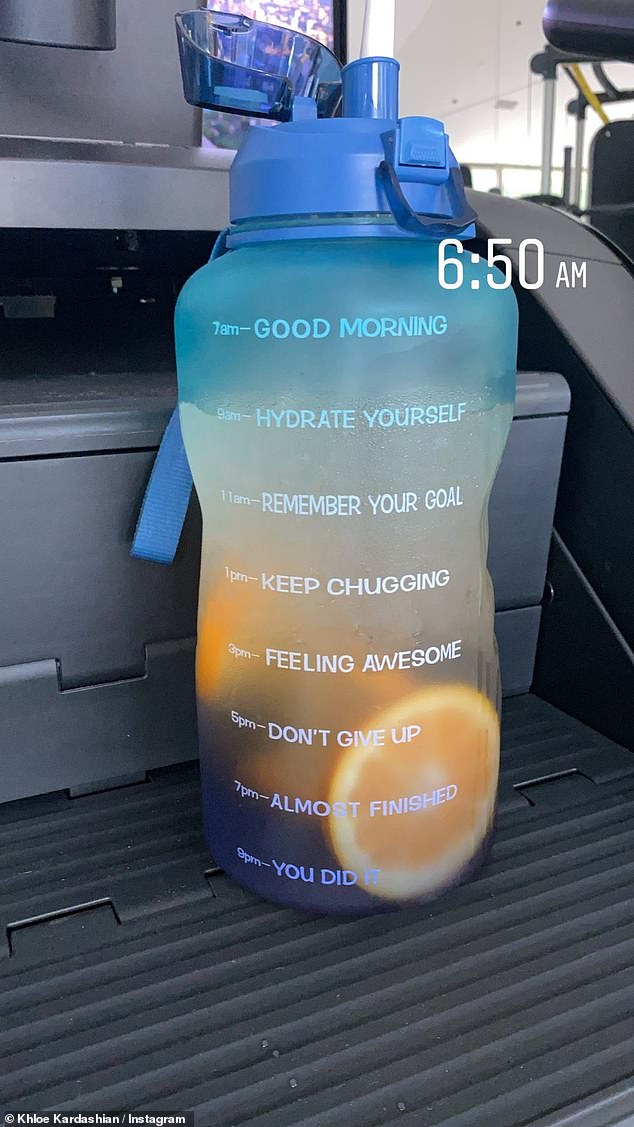 Drink up: Just before 7am she posted a picture of a full bottle of orange-infused water on her Instagram story

The mother-of-one started the day sharing a glowing shot of herself in a nude bodysuit to Instagram before going on to post several mindful quotes to her Story.

‘Every situation in life is temporary. So, when life is good, make sure you enjoy and receive it fully,’ one powerful quote read.

Khloe definitely appeared to be living in the now in her Instagram photo, offering a cool stare while laying on the floor with her bronzed legs splayed out in front of her. 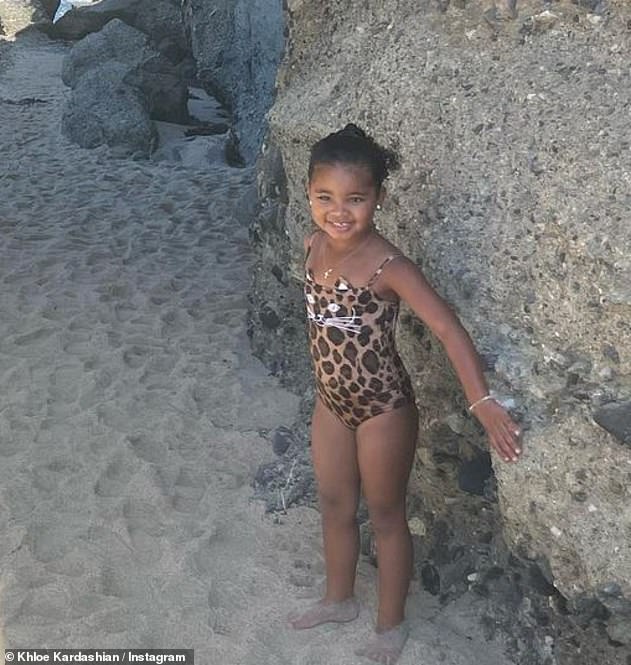 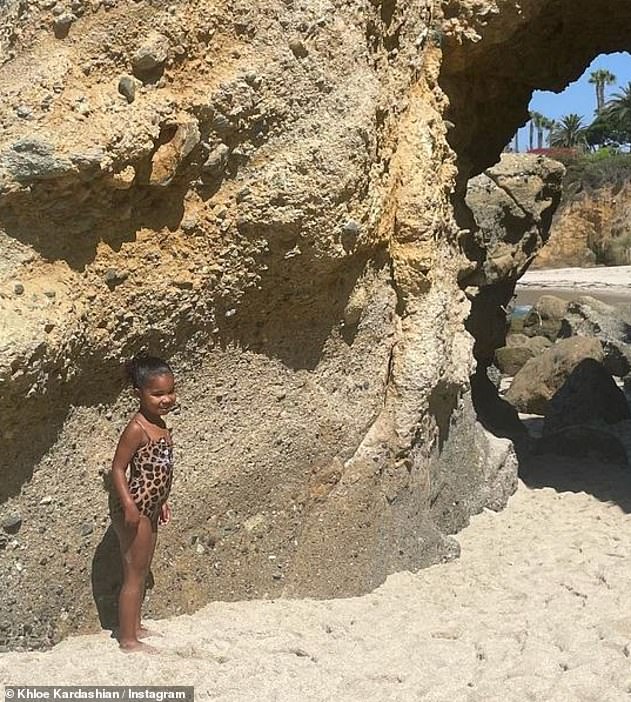 Cute: ‘My moana,’ Khloe wrote under the pics of her only child who looked to be happy

The reality star, who is fond of sharing inspirational quotes on her account, nodded towards change by posting:  ‘Every situation in life is temporary. So, when life is good, make sure you enjoy and receive it fully,’

‘And when life is not so good, remember that it will not last forever, and better days are on the way.’

This comes after news Khloe’s ex and the father of her daughter True, Tristan Thompson, was moving to the West coast after one season playing for the Boston Celtics.

Instead of being across the country, Thompson will now be in Sacramento, California, about a six-hour drive from Kardashian’s native Calabasas.

Last year Kardashian had to contend with the distance. ‘I’m not opposed to Boston, but once you have kids, it’s different,’ Kardashian explained in an episode of Keeping Up With the Kardashians, which aired in June.

‘True has her whole life in L.A. — her cousins, I have preschool class at my house,’ she said. ‘It’s COVID, so I can’t just take her to Boston and go find classes there. Everything’s shut down. Focusing on her: Khloe glowed in a Sunday Instagram, just a day after news her on/off boyfriend Tristan Thompson had been traded to an NBA team in California 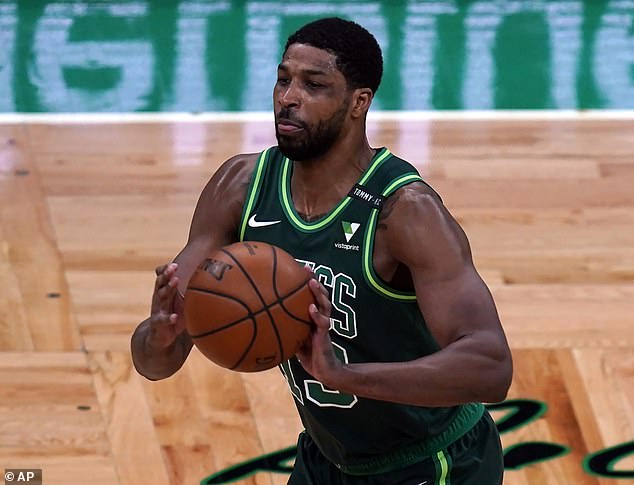 Coast to coast: Thompson has been traded to the Sacramento Kings from the Boston Celtics; seen here in April

‘I think if it was a different year, maybe I’d be more open to uprooting her. But what am I going to do? Takeher there to be in a condo there and stay inside some walls?’

In addition to True, Thompson is father to Prince, 4, whom he shares with his ex-girlfriend, model Jordy Craig.

Kardashian and the professional basketball player were first linked in 2016 when they were spotted spending time together at a nightclub, and they later took a vacation in Mexico. The two confirmed that they were dating that same year and remained very close through much of 2017.

Kardashian revealed that she was expecting a girl during an episode of Keeping Up With The Kardashians that aired the following year.

In 2018, it was reported that Thompson was spotted kissing multiple women in several locations, which surprised the clothing designer. 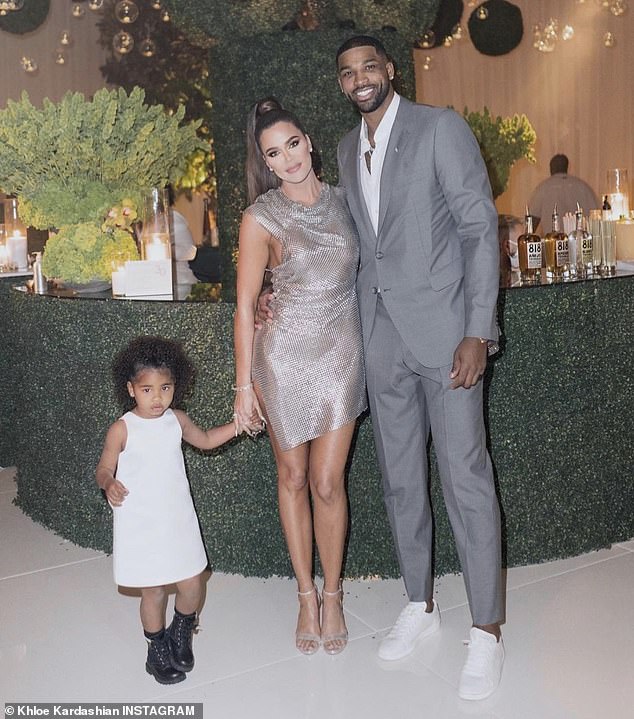 Going back: Kardashian and Thompson were first romantically linked in 2016, when they were spotted leaving a nightclub in each other’s company

That year, she gave birth to True, and the parents later reconciled following the child’s birth.

Although the two appeared to be going strong in their new roles as parents, the basketball player was later caught cheating with several other women, and the two split up in February of 2019.

The pair appeared to mend their relationship over the course of that year and were reportedly on good terms by the beginning of 2020.

The parents quarantined together during the early stages of the pandemic, and their romance was eventually resumed last August.

Earlier this year, it was reported that the couple was planning on expanding their family in the future, although no solid plans have been revealed as of yet.

This past June, it was revealed that Kardashian and Thompson had separated, although they were said to still be on good terms at the time of their split.