‘Spring break!’: Kourtney Kardashian shows of her impressive abs in a silver string bikini by a pool… after stunning in Kim Kardashian’s SKIMS ads

In the photo, the 41-year-old reality television personality could be seen showing off nearly every inch of her curvy body in front of a picturesque indoor pool. 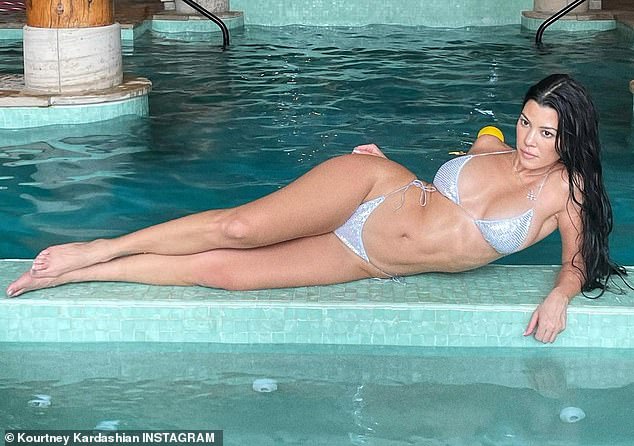 Hot stuff! Kourtney Kardashian was pictured relaxing in an indoor pool in a sizzling Instagram snap that was posted to her account on Wednesday morning 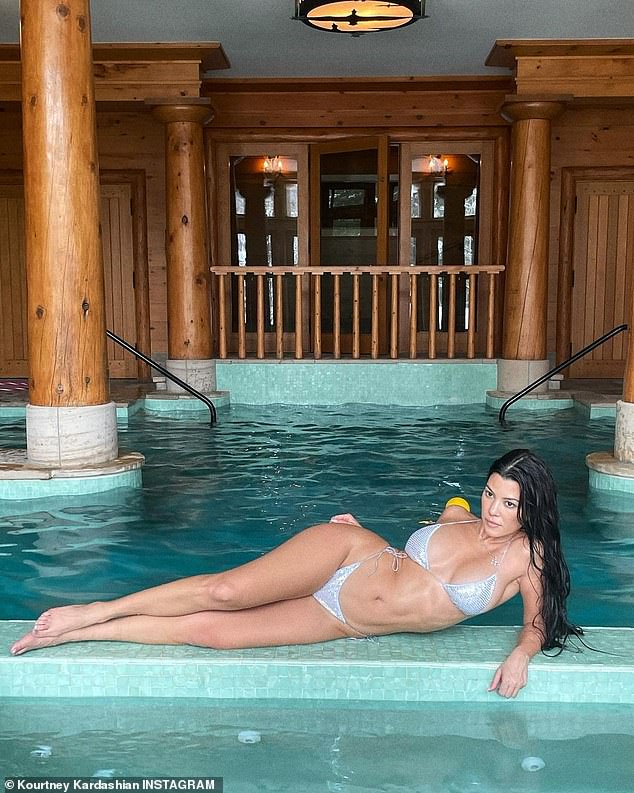 Pinup material: In the snap, Kardashian was seen wearing a reflective bikini top that left little to the imagination of her 114 million followers

In the snap, Kardashian was seen wearing a reflective bikini top that left little to the imagination of her 114 million followers as her abs stood out.

The matching bottoms rode high on her curvy hips and had little ties on each side.

Her normally free-flowing dark brown hair remained wet during the photo shoot and fell down past her left shoulder onto one of the pool’s walls.

Kardashian’s post comes after she was featured in several promotional photos that were taken for her younger sister Kim’s clothing company, SKIMS. 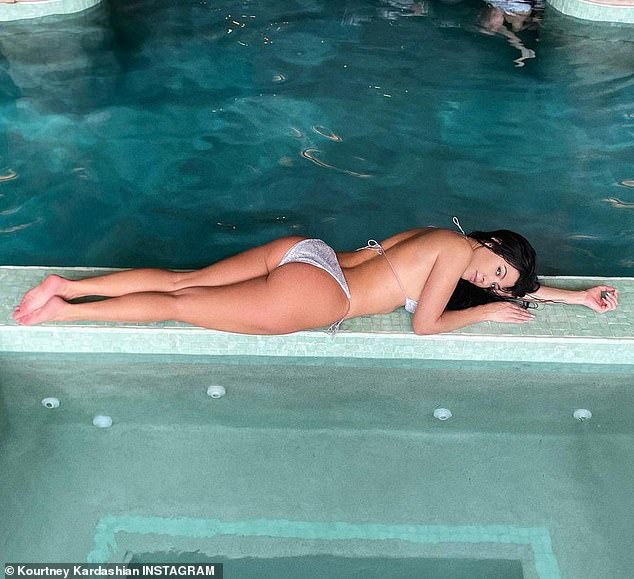 Another angle: And later the pinup shared an image of her backside as she lay on the tiled wall between the pool and hot tub

In one of the more recent shots, the reality television star was pictured posing in the brand’s new silk jacquard sleepwear with her younger sister Khloe as they both made kiss-faces for the camera.

The dark shade of Kourtney’s hair contrasted well with the lighter tones of her sister’s locks in the promotional photo; she was also dressed in a button-up sleep top that was paired with a set of matching shorts.

Her 36-year-old sibling wore a lighter-colored set of pajama pants as well as a triangle bralette; both of the pair’s clothing featured the brand’s name printed as a pattern across the entirety of their sleepwear items.

Kardashian has been featured in several promotional photo shoots for her sister Kim’s brand and often posts many of the shots taken during her modeling gigs to her own Instagram account. 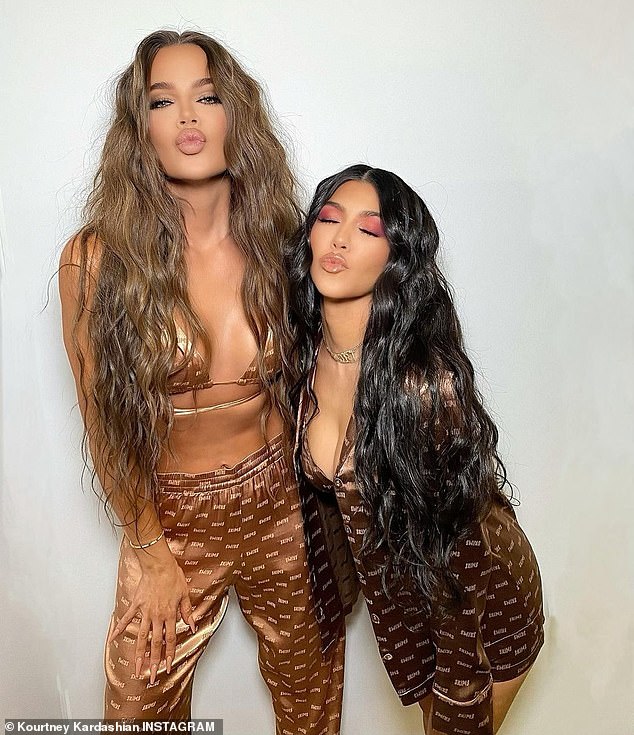 Double trouble: Kardashian and her younger sister Khloe were featured in a series of promotional photosets to announce the launch of SKIMS’ new sleepwear line 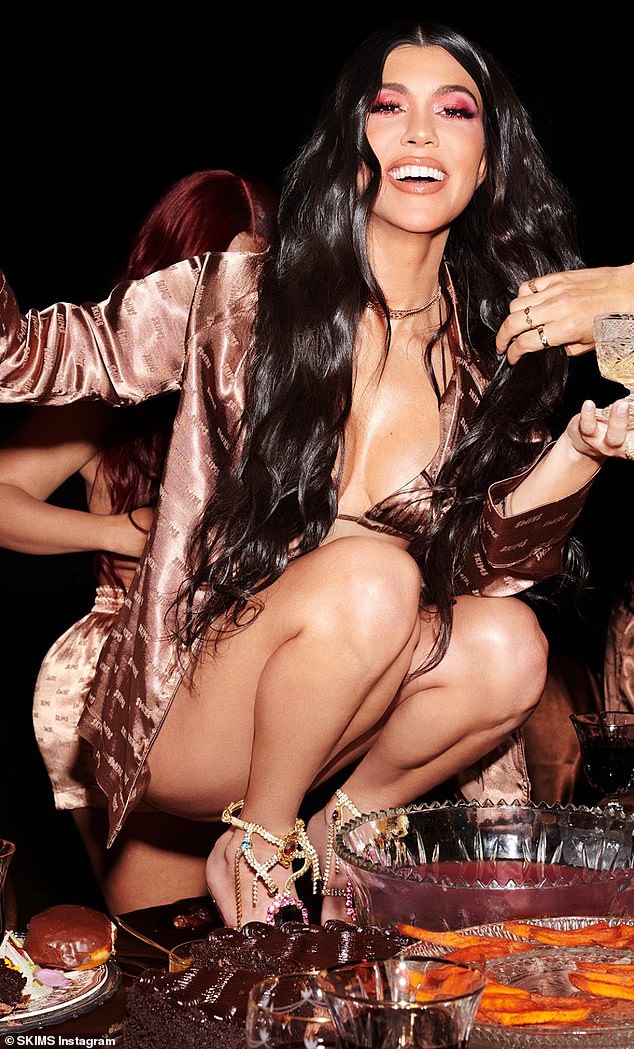 Helping out: Kardashian is often featured in various promotional photoshoots for her sister Kim’s brand SKIMS 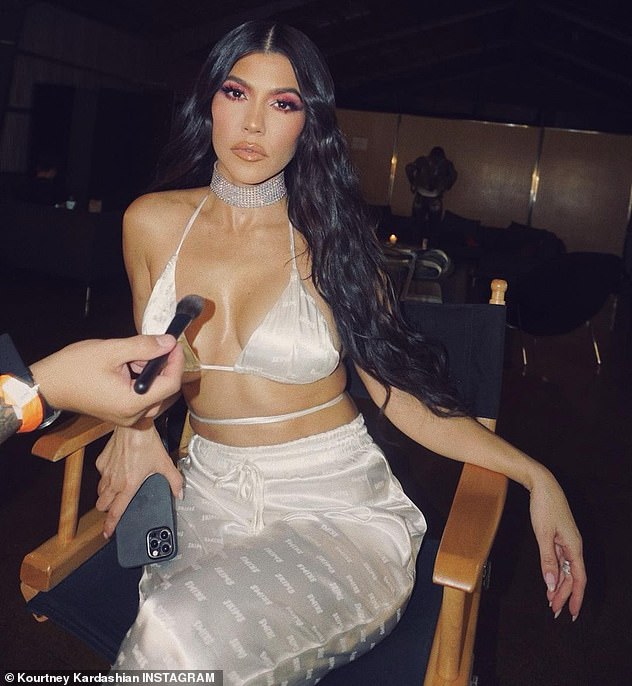 Something new: The second Kardashian sister initially named her company Kimono before changing the title after concerns about cultural appropriation were raised by her fans

The social media figure’s younger sister Kim first launched SKIMS in 2019; the brand was initially named Kimono, but the entrepreneur changed the name after she received backlash about the company’s title.

During an interview with Nordstrom, the second-oldest Kardashian sibling spoke about how she sought to create items that would cater to a wide customer base and make her clients feel good in their own clothing.

‘I wanted shapewear that would allow me to wear amazing fashion pieces comfortably… I also wanted SKIMS to feel accessible for all women, so from the beginning I wanted at least nine shades and an extended size range,’ she said. 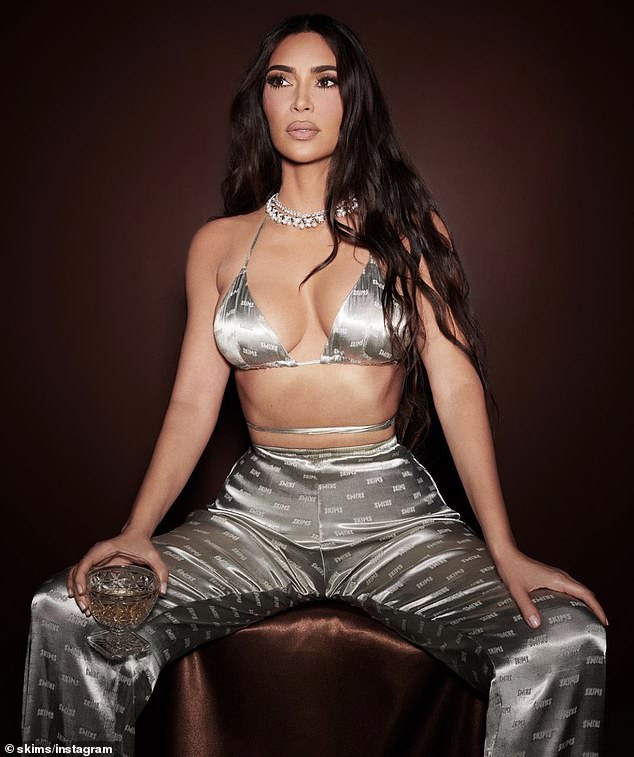 Wide range: During an interview, Kim noted that she wanted her brand’s offerings to ‘feel accessible for all women’ and that she desired to further expand her company

The reality television mainstay also expressed that she wanted her brand’s offerings to be versatile in function and style.

Specifically, she wanted her company to ‘continue to expand and find new ways to create innovative solutions with our shapewear…I want women to turn to SKIMS for all of their dressing needs and be able to find an option that really works for them.’

Kardashian concluded that she was most proud of the positive responses that she has received from many of her customers and that she desired to keep creating products that would be worn with confidence.

‘Having a woman tell me that SKIMS is the first shapewear she has found that actually matches her skin tone, or comes in a size that fits and feels comfortable, is the entire reason I started SKIMS,’ she said.